Nick Cannon has been mercilessly mocked by social media users after his girlfriend Bre Tiesi shared a glimpse of his latest maternity shoot.

The comedian, 41, who announced in January he’s expecting his eighth child, is no stranger to posing with mother-to-bes and fans were quick to joke he ‘might as well do a group shot’ on Twitter.

Nick’s latest shoot saw Bre showcase her bare bump while reclining across the sofa in the black and white images, later sharing a fun-Easter-themed image from the shoot on her Instagram Stories.

ANOTHER one? Nick Cannon has been mercilessly mocked by social media users after his girlfriend Bre Tiesi shared a glimpse of his latest maternity shoot

Slipping into a plunging white robe, Bre cut a stunning figure as she reclined on the sofa while Nick was perched alongside, later gazing down at her bare bump.

Following the shoot, she also took to her Stories to reveal she’d decorated her bump in honour of Easter, with Nick dressing up in a bunny costume.

Donning a black bandeau top to showcase her bare tummy, she captioned the post: ‘I look crazy but these moments are everything I love u do fort the kids love you Happy Easter from our family to yours.’

Gorgeous: Slipping into a plunging white robe, Bre cut a stunning figure as she reclined on the sofa while Nick was perched alongside, later gazing down at her bare bump 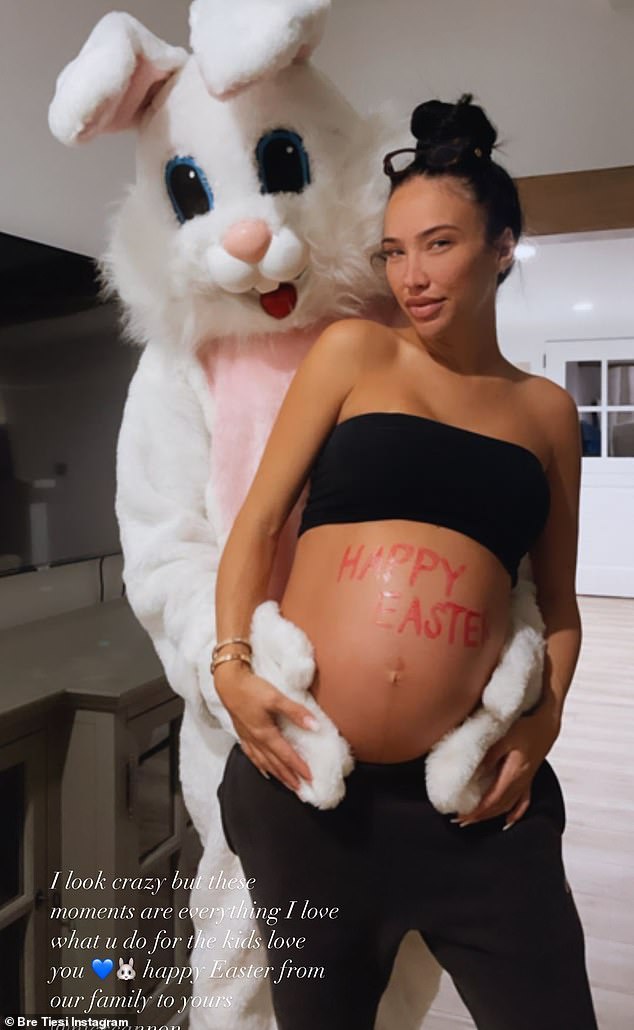 More snaps? The comedian, 41, who announced in January he’s expecting his eighth child,sparked jokes from fans that he ‘might as well do a group shot’ on Twitter 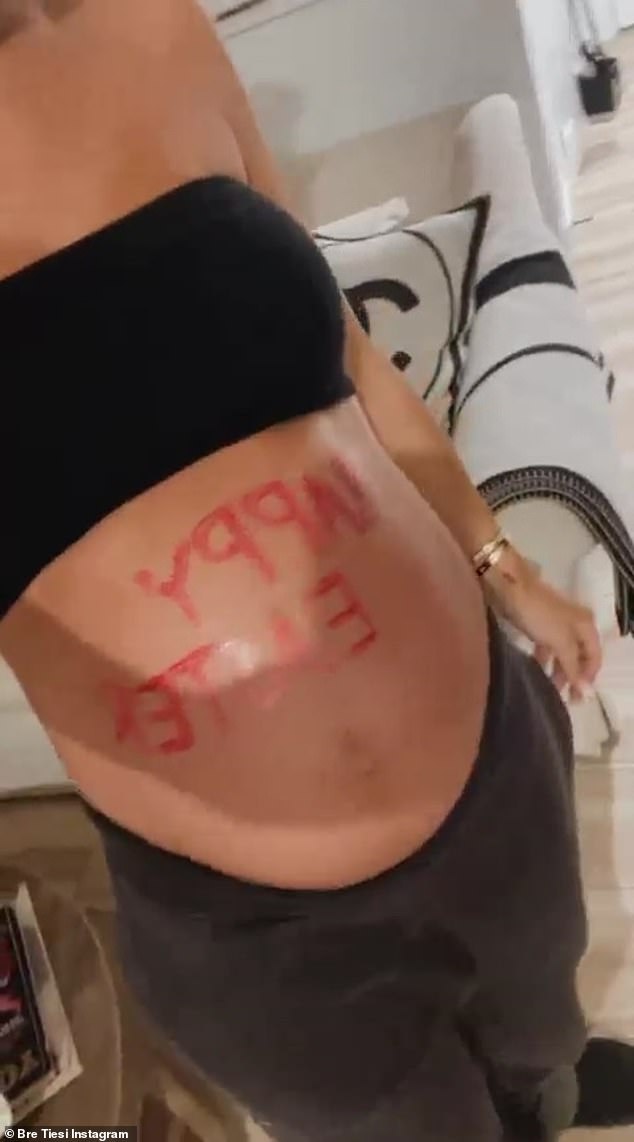 Gorgeous: While Bre shared images from the shoot on Instagram, she also shared an array of cute snaps to her Stories after decorating her bump for Easter

But in the wake of Nick’s latest maternity shoot, fans were quick to poke fun at the star for his latest display of love.

The comic has become known for putting on a loved-up display with each woman he’s expecting a child with.

One fan posted a hilarious collage of Nick’s shoots from year’s past, writing: ‘Lmfao and they all are like ‘ahhhhhh in love, im so special and not like the rest. Ahhhhh blessed.’ 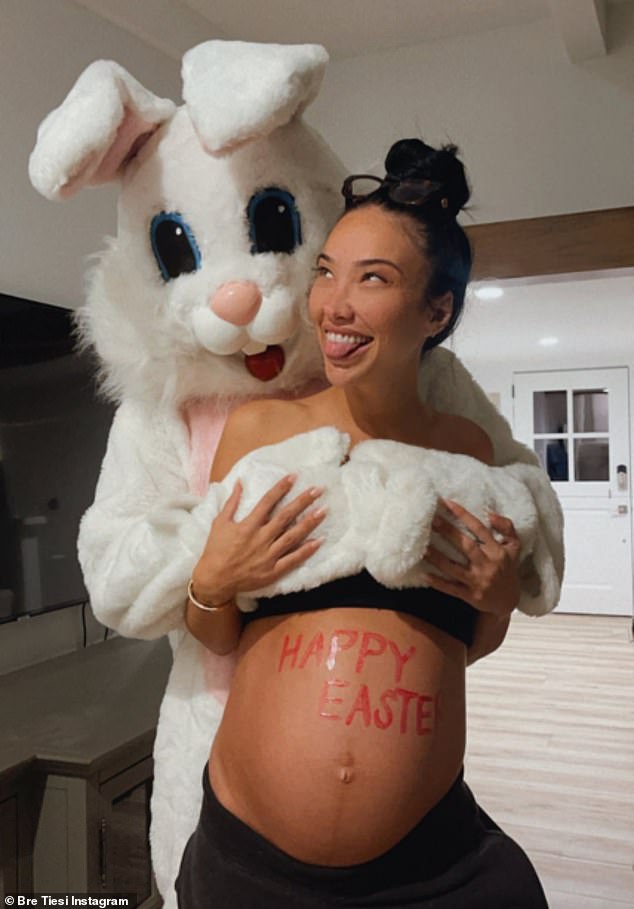 Playful: Following the shoot, she also took to her Stories to reveal she’d decorated her bump in honour of Easter, with Nick dressing up in a bunny costume 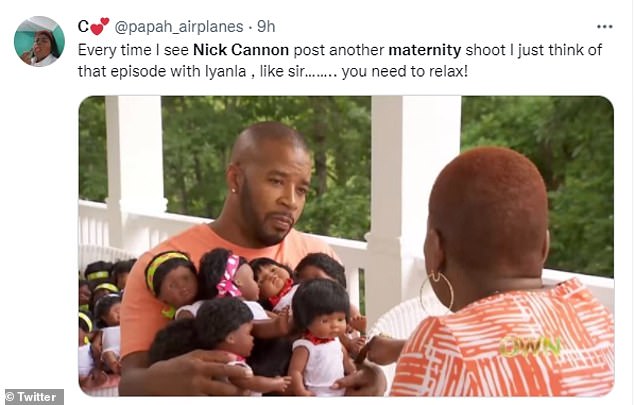 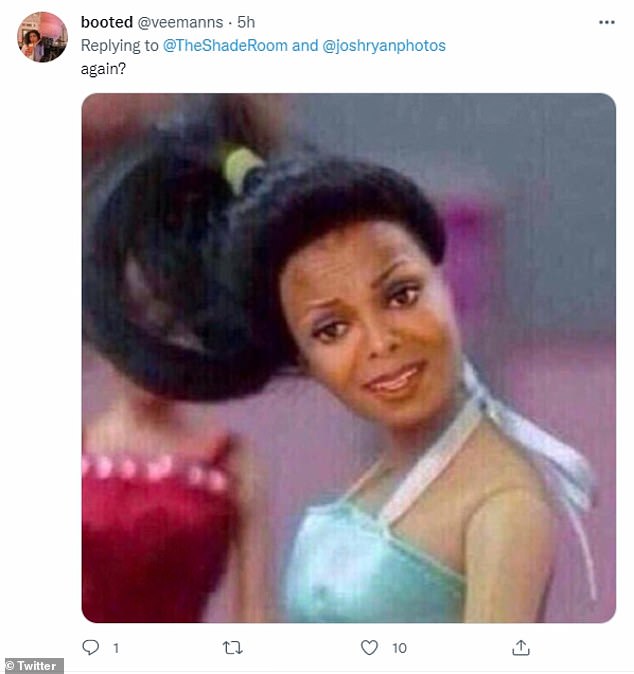 Another wrote: ‘If Nick Cannon is not gonna do anything else, he gonna show up for a maternity shoot.’

‘Nick Cannon gotta hold the record for most maternity shoots, every month this mf got a new one,’ a third added.

‘Nick Cannon is at a maternity shoot every month holding a different belly, that’s crazy,’ a fan noted.

‘Nick Cannon has a maternity shoot every few months. Sir just have all the bms coming in and do a group shot. One and done until the next batch,’ a fan added. 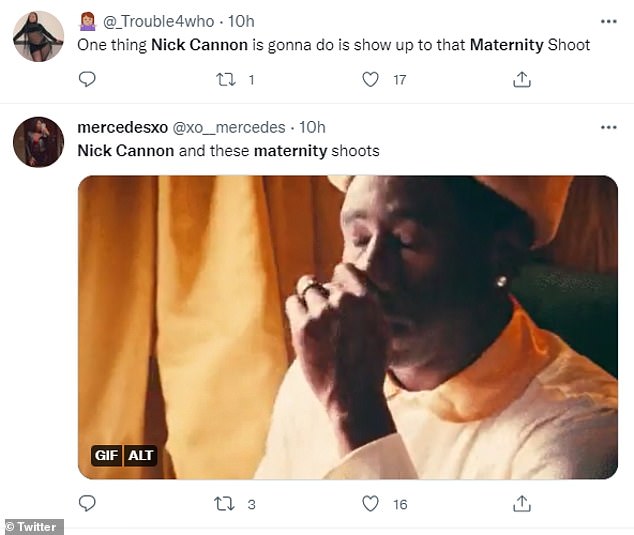 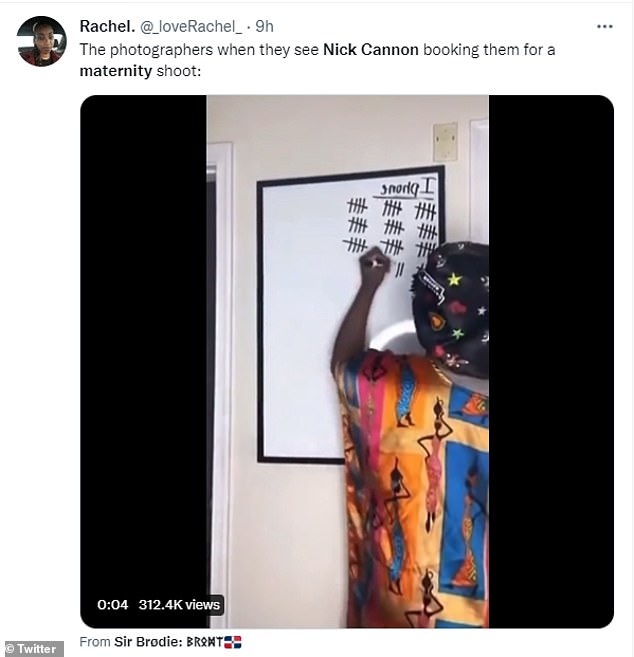 MORE? Fans were quick to poke fun at Nick’s latest maternity shoot, joking he ‘might as well do a group shot’ as he’s accumulated such a collection

Nick’s shoot is just the latest in a long line of loved-up displays he’s put on after first setting the trend in 2011 with then-wife Mariah Carey, announcing they were expecting twins Monroe and Moroccan, now 11, in a stunning shoot for Life & Style Magazine.

The hitmaker then appeared in similar images with Brittany Bell in 2017, before she gave birth to their son Golden ‘Sagon’, five, and another in 2020 before she welcomed their second child Powerful Queen, 15 months.

In April 2021 Nick posted for a picturesque forest shoot with Abby De La Rosa, who stunned in a chained crop top and a flowing white skirt, before she gave birth to twins Zion Mixolydian and Zillion Heir Cannon in June 2021. 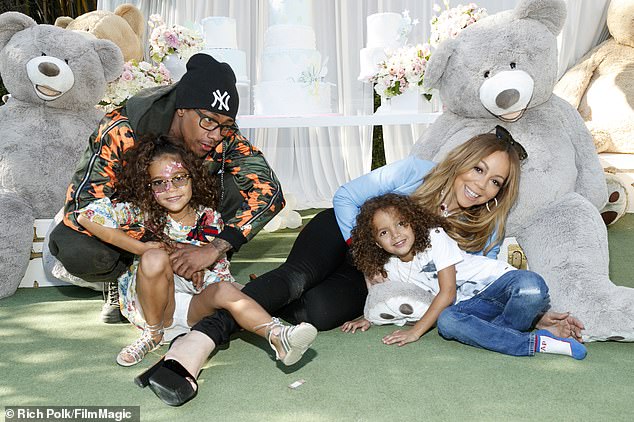 Proud dad: Nick is already father to twins Monroe and Moroccan, now 11, with Mariah Carey, kickstarting the trend of maternity shoots with the singer in 2011

Alyssa Scott then confirmed she was expecting Nick’s seventh child by posing for a romantic beach shoot the same month he welcomed twins with Abby, before she announced the birth of their son Zen on June 23.

Sadly, in December 2021, Nick revealed that his youngest son passed away at just eight months old, after battling a brain tumour.

Bre also recently gave a rare interview where she discussed her ‘beautiful’ relationship with Cannon. 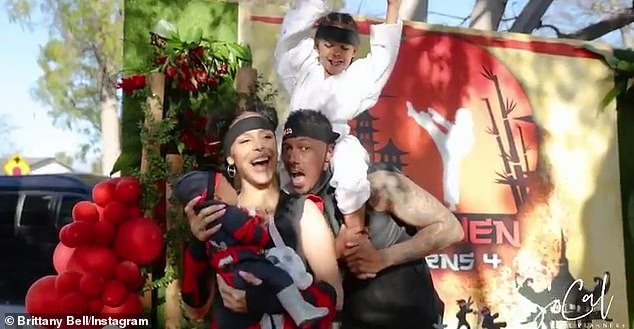 Family: He then posed with Brittany Bell in 2017, before she gave birth to son Golden ‘Sagon’ and another in 2020 before giving birth to daughter Powerful Queen, 15 months

She talked to E! New’s Daily Pop about their relationship as she said while ‘some people have their idea of conventional relationships and certain things,’ she and the television personality still ‘have a beautiful relationship [where] everything is so supportive and positive.’

The stunner also revealed that despite them not dating exclusively until recently and even if they have been in other relationships she would ‘always come back’ to Nick.

She explained: ‘Him and I have had our on-and-off for years. And I just respect and love who he is so much as a person, that when I thought about, ”Do I want my son to be this person? Look at your characteristics, look at your personality, look at how you treat people…” That’s what is so much more important to me than anything. And he treats me amazing, so that’s all I look at.’ 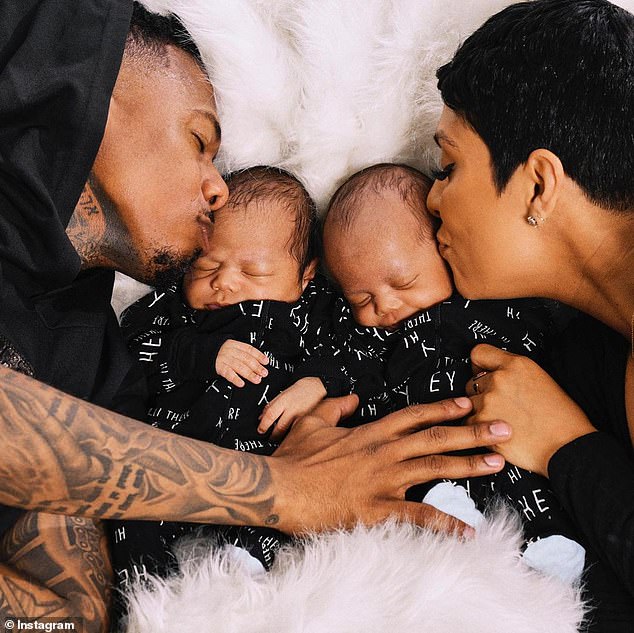 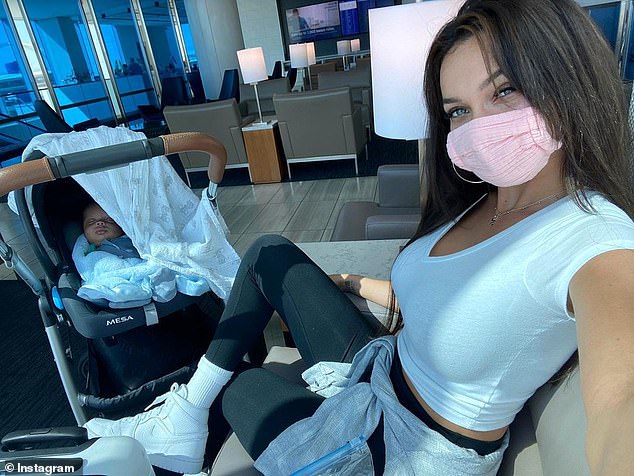 Last month Nick apologised to the mothers of his children for how he shared the news he was expecting his eighth child on his television show.

The 41-year-old comedian announced that he is expecting his eighth child with new girlfriend Brie live on ‘The Nick Cannon Show’ whilst also discussing Zen’s death.

He spoke out on his show to apologize for ‘probably misspeaking.’

‘So I promise you, I promise the mothers of my children, I promise my family that I would do better and continue to be more understanding, caring, compassionate, like they often show me each and every day,’ he said.

The talk show host went on to admit that discussing the death of his son alongside news of the latest pregnancy was something he ‘didn’t need to do.’ 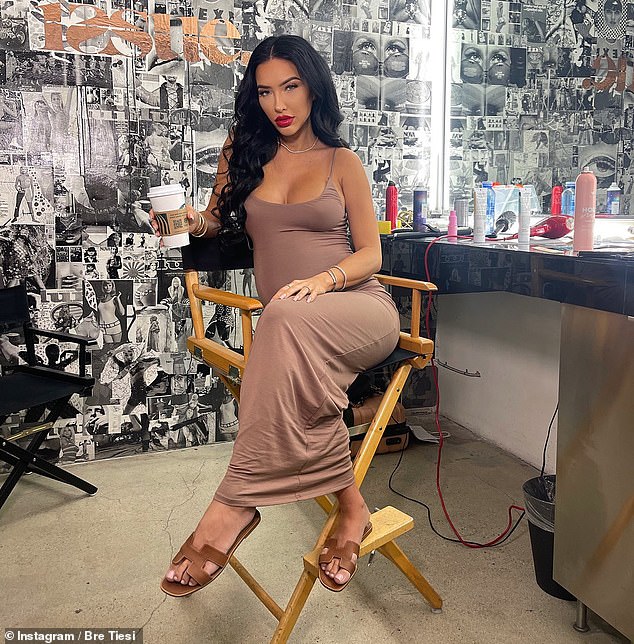 Surprise! In February Nick announced that he was expecting his eighth child with Bre, who recently admitted that he ‘treats her amazing’

Nick Cannon, who doesn’t believe in monogamy, has fathered seven children with four women… and an eighth is on the way

Nick Cannon has seven children with four different women, including his ex-wife Mariah Carey, ex-girlfriend Brittany Bell, his current partner Abby de la Rosa, and model Alyssa Scott, who appeared in one of his music videos.

He has said he does not believe in monogamy, calling it in an interview with The Breakfast Club back in August a  ‘Eurocentric concept,’ and ‘just to classify property when you think about it.’

Cannon claimed it wasn’t his decision for the women to have children with him, and he is just ‘following suit.’ 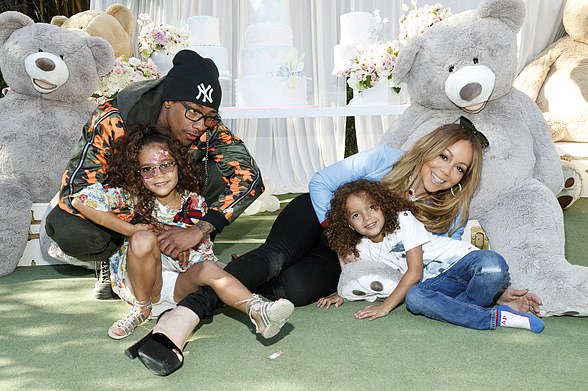 Cannon, 41, was married to singer Mariah Carey for eight years from 2008 to 2016, and together they had twins, Monroe and Moroccan Scott, born on April 30, 2011 – their third wedding anniversary.

Monroe, their daughter, was named after Marilyn Monroe, an inspiration to singer Carey, and Moroccan, nicknamed ‘Roc,’ was named after the Moroccan décor in the apartment where Nick proposed to Mariah in 2008.

In July, Parade reports,  Monroe started her modeling career in a video for OshKosh B’gosh. 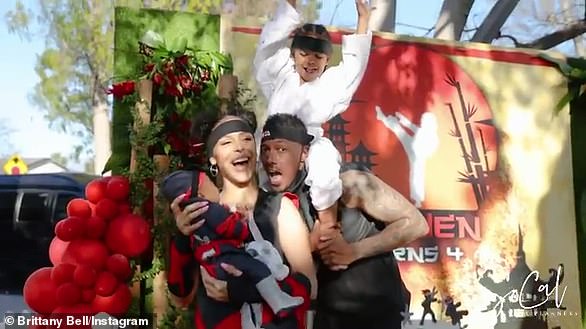 Cannon also has a son, Golden Sagon, in the karate outfit, and a daughter, Powerful Queen, with his ex-girlfriend Brittany Bell, left

Cannon also has two children with his ex-girlfriend Brittany Bell, a model and pageant holder.

Their son Golden Sagon was born on February 21, 2017, and had a Karate Kid-themed birthday party last year, and the pair welcomed a daughter, named Powerful Queen, last December. 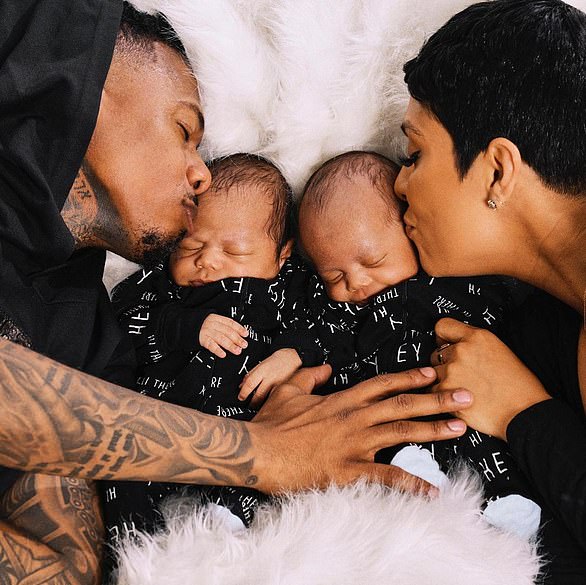 Back in April, Cannon and his current girlfriend, DJ Abby de la Rosa, announced they were expecting twins with a series of maternity photos posted to social media.

They shared the news to Instagram, with a picture of Abby in the hospital bed cradling her two baby boys. 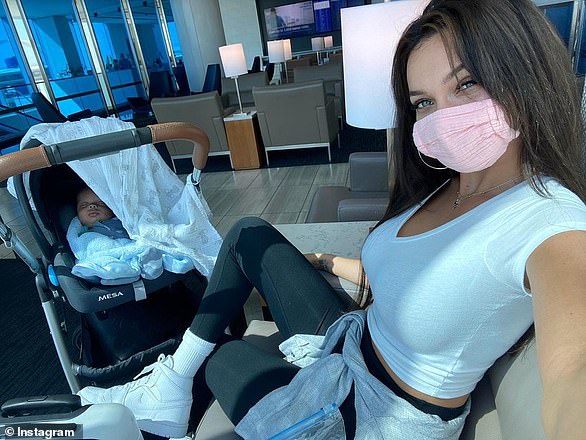 Just a little over a week after the twins were born, model Alyssa Scott gave birth to Cannon’s seventh child, Zen Scott.

There had been rumors circulating online after Scott became pregnant that Cannon was once again the father, and on Father’s Day, he confirmed the news, appearing shirtless in an Instagram story on Scott’s page.

‘Celebrating you today,’ she wrote in the Instagram story.

Zen died on December 5 of brain cancer at only five months old.