Nick Cannon was spotted arriving to cheer on his son at the youth basketball game in Thousand Oaks earlier Friday evening.

The 42-year-old comedian was accompanied by former beauty pageant contestant, Brittany Bell, who securely held their newborn son, Rise Messiah Cannon, in her arms. Their two other children, Golden Sagon and Powerful Queen, were also pictured with the two stars.

Along with the TV personality, a number of other A-list celebrities were in attendance at the event, including Kanye West and his ex-wife, Kim Kardashian.

The star was pictured opting for a monochromatic look wearing a black hooded sweatshirt and a pair of black pants.

He added a black printed beanie on top of his head to accessorize his look for game night and wore a pair of black, high top sneakers.

Once he arrived at the venue, Nick could be seen pushing a stroller with his daughter sitting snuggly inside, while his son was close by holding a basketball as he excitedly prepared for his game.

His newborn son, who was welcomed to the world last month in September, was held in Brittany’s arms as they strolled across the parking lot to enter the venue along with other stars and guests. 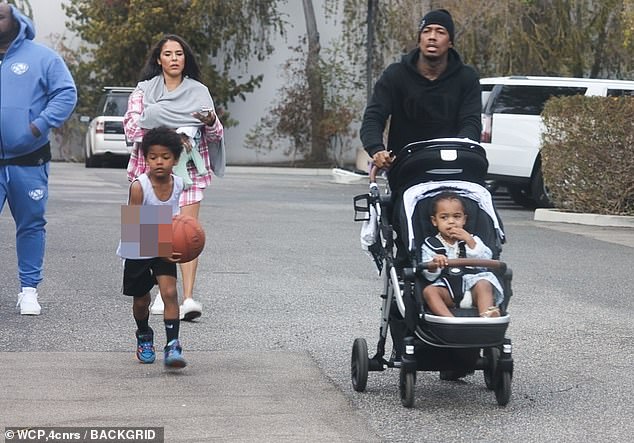 Family time: The comedian was pictured pushing a stroller with his daughter while his son also nearby, holding a basketball in preparation for his game 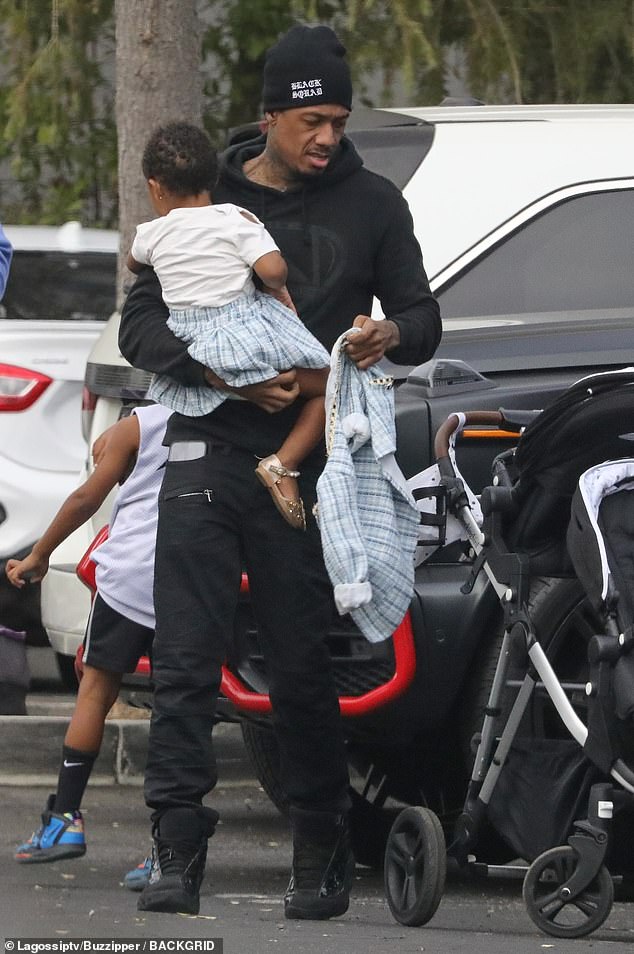 Helpful: The actor was pictured holding his daughter as he prepared to place her securely in a large stroller

Brittany donned a red and white, oversized flannel while slipping into a pair of comfortable, white sneakers.

Her hair was parted to the side, and effortlessly flowed behind her past her shoulders.

As the group made their way to the doors, the comedian ran into his close pal, Kanye West.

The two were pictured sharing a brief embrace as they took a few moments to quickly catch up before the basketball game commenced.

Kanye, also known as Ye, kept his look causal and wore a graphic, long-sleeved white shirt which he tucked into classic blue jeans. He slipped into a pair of large, rubber gray boots to complete his ensemble. 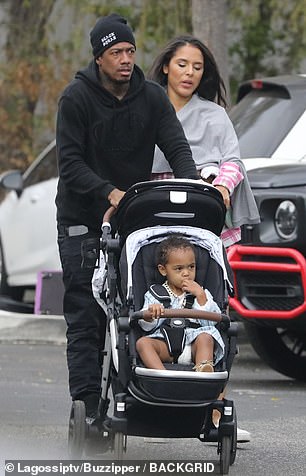 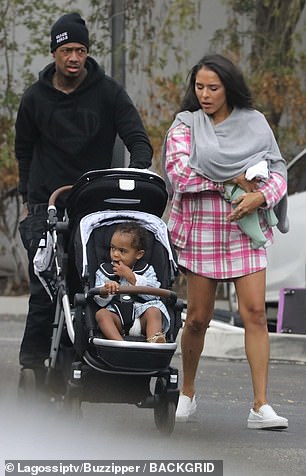 On their way: Nick and Brittany were seen side-by-side as they slowly made their way towards the venue 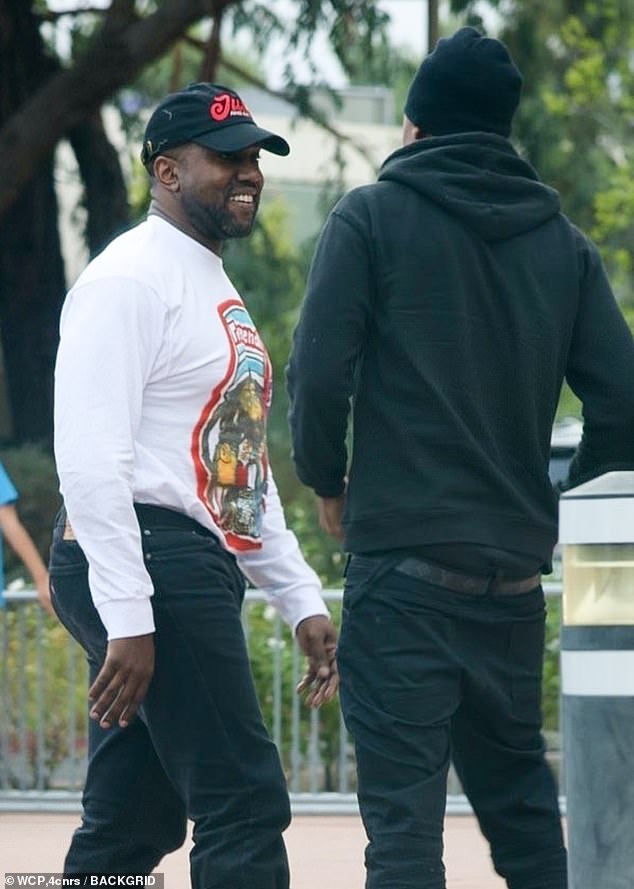 Reunited! Nick was spotted running into pal, Kanye West, who was also in attendance to cheer on his daughter, North West 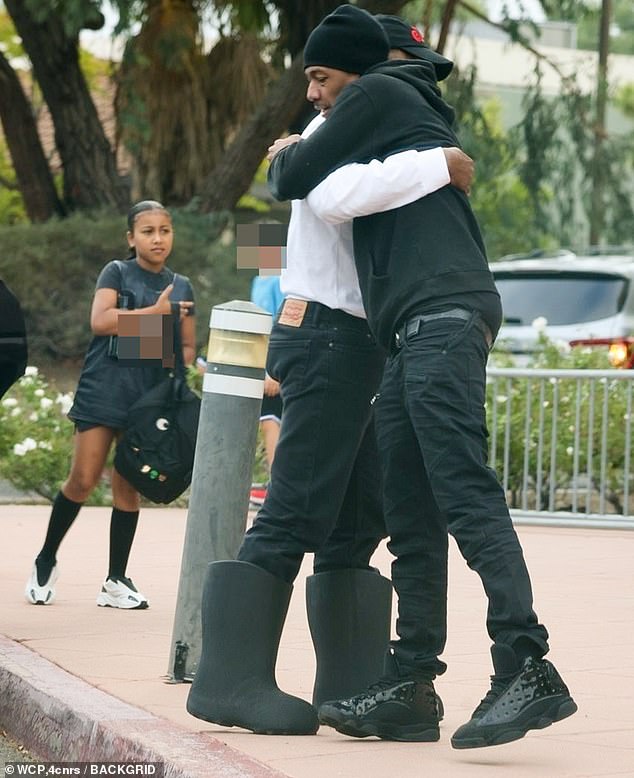 Embrace: The two stars were pictured sharing a quick hug as they caught up before watching the game

The All That alum expressed the news on his Instagram at the time and wrote, ‘Another Blessing!!! As my journey on this planet becomes more and more remarkable and unfathomable, all I can do is thank God and continue to ask the Most High to order my steps.’

He continued by typing, ‘He has given me stewardship and dominion over a family dynamic that to some is unimaginable.’

Nick also gave a special shoutout to Brittany by stating, ‘She has taught me so much about parenting, psychology, spirituality, love and just life in general.’ 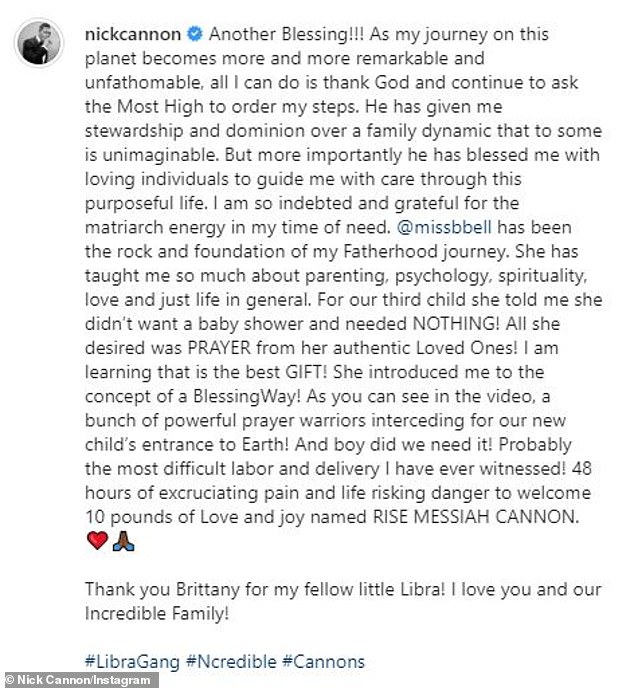 Gratitude: After welcoming his son, Rise Messiah, last month in September, Nick typed out a special statement onto his Instagram to his followers

Along with Nick and Kanye, other stars that attended the basketball game included Kim Kardashian, who also cheered on daughter, North.

The reality star dressed to impress as she avoided running into her ex, Kanye, amid recent drama.

The mother of four reportedly has ‘removed’ herself from the controversy revolving around Ye, sources informed TMZ.

She donned a long-sleeved, form-fitting Balenciaga black top with built-in gloves which was tucked into the waist of black track pants, also from the luxury brand.

Her platinum blonde hair was parted in the middle, and flowed down straight past her shoulders. Opting for style rather than comfort, Kim slipped into a pair of close-toed heels to complete her overall ensemble.

The SKIMS founder threw on a pair of black shades and carried a silver purse in her hand to accessorize her game night look. 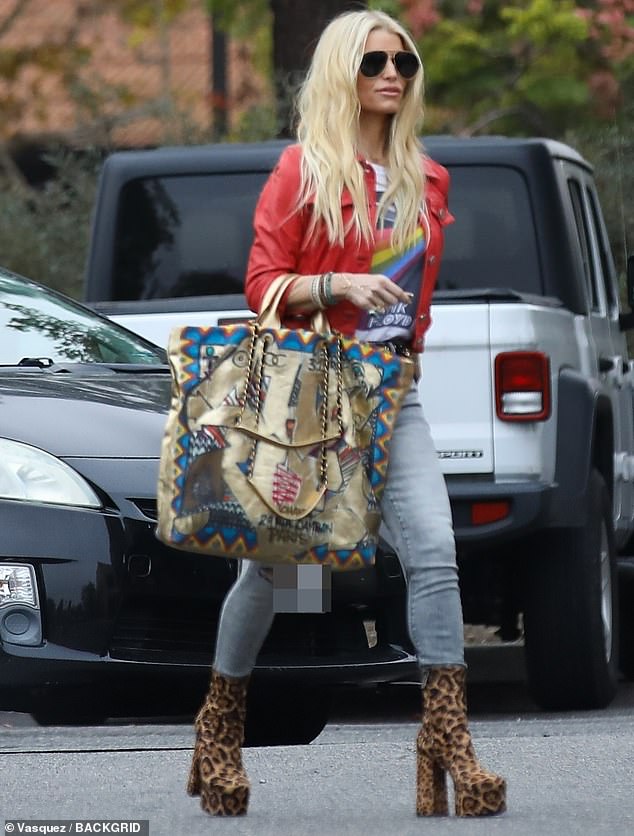 Wow! Jessica Simpson was another star that attended the game to cheer on her own son earlier Friday

Jessica Simpson was another celebrity that was spotted arriving at the basketball game to support her son from the sidelines.

She made a bold fashion statement as she slipped into a pair of light blue jeans and a colorful, graphic T-shirt.

To stay warm in the cooler temperatures, the businesswoman donned a red jacket and added a pair of tall, cheetah-print high-heeled boots.

A large, printed tote bag was slung over the crook of her elbow to hold a few items she needed throughout the night. 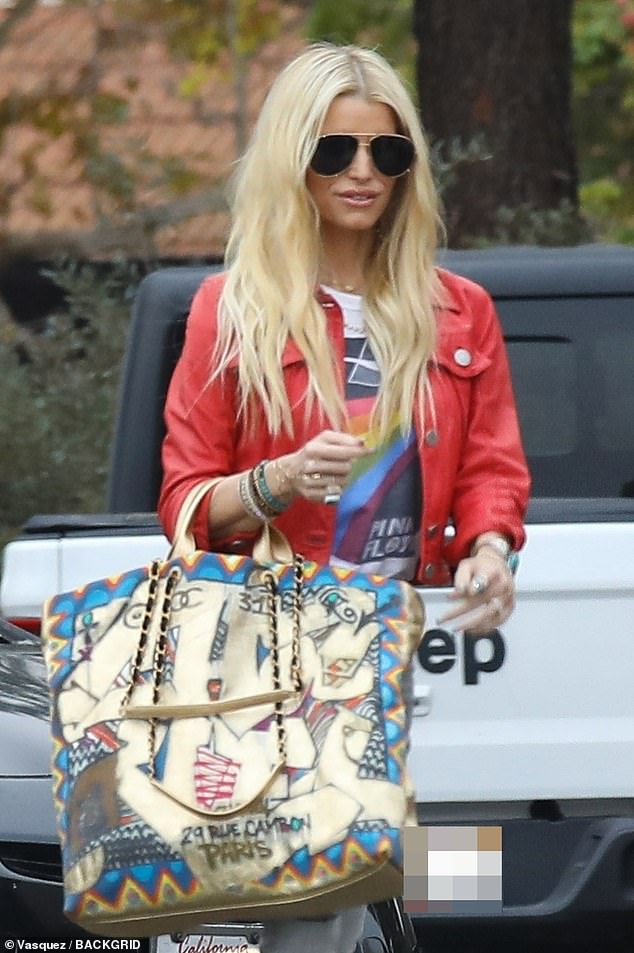 Stylish arrival: The actress and businesswoman donned bold colors such as a red jacket and cheetah-print high-heeled boots as she attended the game