Health officials spent £45million on transferring staff email addresses as part of the biggest organisational restructure in a decade, MailOnline can reveal.

Ex-Health Secretary Matt Hancock, who originally unveiled the plan in February 2021, claimed it would ‘bust bureaucracy’ in the NHS by allowing patients to move seamlessly between hospitals, GPs, and social care.

But Government tender notices show the NHS spent tens of millions on transferring staff emails between the defunct CCGs and their replacement ICS.

The work involved giving them a new email address, which was also needed to ensure they could continue to access official health service data.

Gardening clubs, art classes and walking groups have all been hailed as healthy alternatives to popping pills.

But there is ‘scant evidence’ social prescribing actually improves people’s health, according to a scientific review.

Researchers found no consistent evidence that the radical approach to treatment — now widely available on the NHS — actually works.

There was only ‘limited evidence’ that the schemes improved people’s perceptions of personal health or the quality of care received, University of Dublin scientists said.

Far more robust research is needed before policymakers continue to push it as treatment, they conclude.

Thinktanks blasted the multimillion spend on a ‘wasteful IT project’, adding that the money would be better spent on frontline NHS services.

It also comes as frontline NHS services continue to buckle and, in some cases, near collapse even before a predicted harsh winter for the health service.

Joe Ventre, digital campaign manager at the TaxPayers’ Alliance, told MailOnline the £45million spend was a waste of precious funds.

‘Taxpayers are fed up of paying for these endless reboots,’ he said.

‘When budgets are stretched, households expect to see precious resources funnelled to the frontline.

‘NHS bosses need to get a grip on these wasteful IT projects.’

A spokesperson for NHS Digital, the part of the health service which provides IT and data systems for the NHS in England, said the transfer of emails was standard procedure.

‘This is standard operational activity when organisations merge and included ensuring staff continued to have the same level of access to data to provide support to patients,’ they said.

The £45m was paid to the UK office of the Irish-based IT consultancy Accenture for services completed in 2022.

According to the tender document, the introduction of the ICSs was a change in the contract that ‘could not have been foreseen by NHS Digital’.

The spend comes as official data last week revealed that more than 7million people in England are now waiting for routine NHS ops such as hip and knee replacements.

Experts also fear the ‘grim milestone’ — the equivalent of one in eight people — will only get topped as the pressures of winter, Covid and flu kick in.

The backlog is up from 6.8m last month and marks the highest total since NHS records began in 2007. Almost 390,000 patients have been forced to endure year-long waits for their treatment, often while in serious pain. 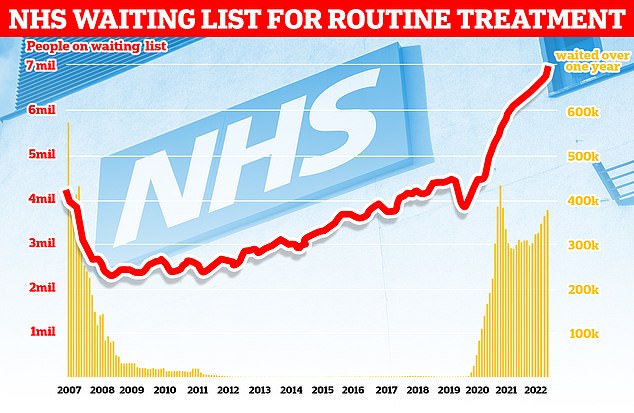 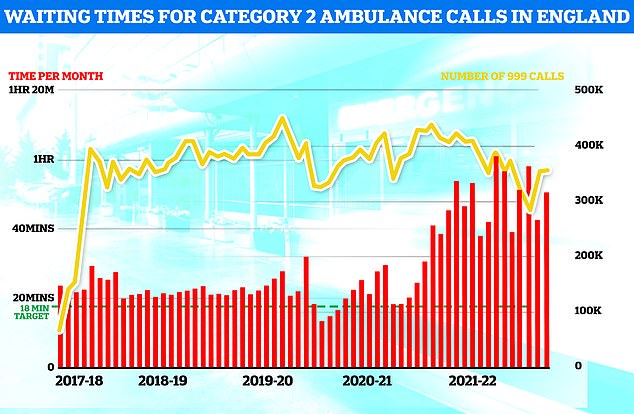 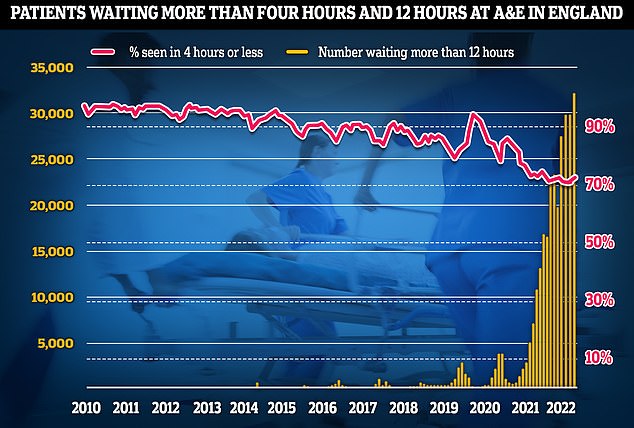 Patients are also struggling to get emergency help, with ambulances now taking an average of just under 48 minutes to respond to emergencies like heart attacks and strokes — more than double target of 18 minutes.

The cash-strapped health service is also facing a financial crisis, with NHS England chief executive Amanda Pritchard describing it as as a ‘f****** nightmare’ in closed doors meeting in London last week.

Her comments come after dire predictions that inflation will cost the NHS an extra £7billion next year.

At the meeting she told NHS leaders not to worry about the dire finances and focus on delivering for patients.