The NHS should launch specialised clinics to people who have suffered long-lasting illness after getting a Covid jab, an MP said today.

Sir Christopher Chope, Tory MP for Christchurch in Dorset, called for the health service to ‘take seriously’ the need to help the unlucky few who’ve become seriously unwell after getting the life-saving vaccines.

He also said it should be easier for anyone who has been physically or mentally disabled by the jabs to access a £120,000 pay-out — the one-off compensation victims can currently get.

Sir Christopher made the comments at the All-Party Parliamentary Group for the victims of vaccine damage, which he chairs.

He said the NHS has so far rejected calls for specialist clinics — despite setting up similar ones for those suffering from the long-lasting effects of a Covid infection.

More than 136million Covid vaccines have been dished out in the UK since the pandemic began. 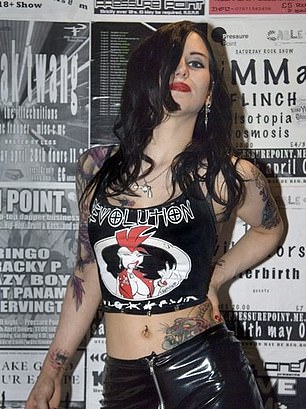 Sir Christopher Chope (left), Tory MP for Christchurch in Dorset, called for the health service to ‘take seriously’ the need for medical help and advice for those who became unwell after getting a vaccine. Vikki Spit (right) in June became the first person to receive a Vaccine Damage Payment of £120,000 after her fiance died following complications from the AstraZeneca vaccine last year 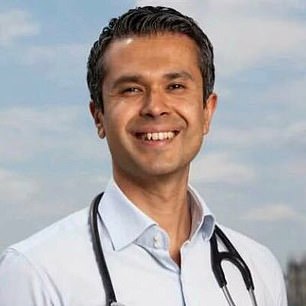 Sir Christopher also invited Dr Aseem Malhotra (pictured), an NHS consultant cardiologist, to give a talk on ‘curing the pandemic of misinformation on Covid through real evidence-based medicine’. He argued that people were more likely to suffer a serious reaction to a Covid vaccine than be hospitalised with the virus

A rock musician’s fiancée was the first person in the UK to receive a £120,000 Covid vaccine damage payment after her 48-year-old husband died from a blood clot following his AstraZeneca jab.

The singer, known as Lord Zion, fell ill with an agonising headache on May 13 last year – eight days after having the first jab, at Penrith Auction Mart in Cumbria.

He died at Royal Victoria Infirmary, Newcastle, on May 19.

His fiancée, Vikki Spit, 39, who had spent just one night apart from him in 21 years, said her life was ‘smashed into a million pieces’.

And now she will be paid out £120,000 in damages related to the Covid vaccine.

Zion’s death certificate cites an irreversible brain injury caused by a haemorrhage for his death, in turn caused by ‘complications of a Covid-19 virus vaccine’.

Ms Spit applied for the Vaccine Damage Payment Scheme in early June last year, and was told last week that she would receive the settlement.

She said: ‘It’s the first step in the battle. This isn’t about money as nothing can bring back the people we have lost. This is about recognition.

‘I think it is disgusting that widows and injured people have had to fight for a year to get this support, we aren’t finished yet.’

Real-world evidence has repeatedly proven they are safe and save lives.

Yet, like with every medicine, there are risks. Scientists insist, when it comes to the Covid vaccines, however, that they are tiny.

Some Britons have even died from blood clots, an extremely rare side effect of AstraZeneca’s jab that saw it eventually restricted for the over-40s.

More than 1,200 claims for compensation have been made to the UK’s vaccine damage payment scheme.

It entitles families to a £120,000 payment if a loved one dies or is left significantly disabled as a result of Government-recommended jabs, not just Covid ones.

The first Covid vaccine pay-out was to Vikki Spit, the wife of rock musician Lord Zion, who died from a blood clot following his AstraZeneca jab.

Dozens attended the APPG in Portcullis House today, with Sir Christopher saying that many were ‘victims or bereaved as a result of doing the right thing by the Government and having their vaccines’.

He called for the NHS to ‘take seriously and recognise the need’ for ‘effective help and advice’ for those suffering from the side effects of Covid vaccine.

Sir Christopher said: ‘The Government has set up clinics for long Covid and I’ve asked that they should set up equivalent clinics for those who are suffering from the consequences of taking vaccines.’

He said the NHS have ‘so far refused’ to launch vaccine damage clinics.

Sir Christopher added: ‘One of the purposes of this APPG to try and get the Government to change its mind and in a sense realise the reality that sadly Covid vaccines can cause damage.

‘Fortunately, this is only a relatively small minority of people.

‘But these are not the absolutely safe and effective vaccines that they were launched to be.’

Statisticians estimate that 2.3million people in the UK were still suffering long-lasting Covid symptoms by September — with half of them lasting for at least a year.

But the actual figure is widely debated, with some experts saying they are likely to be a huge overestimation given symptoms like headaches and tiredness are also linked with lots of other conditions.

It is unclear how many people are living with harm from the vaccine but campaign group Vaccine Injured Bereaved say it is a ‘small number’.

Around 460,000 reports of side effects have been made to the UK’s medicines watchdog.

But the vast majority of these are for a sore arm and general flu-like symptoms, which are common and short-lasting post-immunisation.

And the reports are not proof that the vaccine is to blame. Everyone is urged to share any symptoms that show up after the jab, in order to allow health chiefs to track trends.

It is this mechanism that allowed the UK’s medicines watchdog to spot the blood clot link to AstraZeneca.

Anyone left unwell from a vaccine is advised to reach out to their GP for advice.

The vaccines — four have been used in the UK, including ones made by Pfizer, AstraZeneca and Moderna — have been credited with saving more than 100,000 lives across the UK.

Forty-five people in England and Wales have died due to a Covid vaccine side effect, according to the latest data from the Office for National Statistics.

Sir Christopher added: ‘We are not only concerned in the APPG about those who have suffered themselves or lost loved.

‘We also want to do something to ensure that for those who have permeant conditions as a result of adverse reactions, we want to remove the 60 per cent disablement bar to financial help.’

The Government’s compensation is only given if people are ’60 per cent’ mentally or physically disabled — which is determined by doctors.

Sir Christopher also invited Dr Aseem Malhotra, an NHS-trained cardiologist, to give a talk on ‘curing the pandemic of misinformation on Covid through real evidence-based medicine’.

Dr Malhotra, who promoted Covid jabs on TV during the early days of the pandemic, argued that people were more likely to suffer a serious reaction to a Covid vaccine than be hospitalised with the virus.

Dr Malhotra argued that Pfizer’s Covid vaccine should be immediately suspended until all of the raw data on the vaccine’s effectiveness is made available.

His own concerns were raised following the sudden death of his GP father Dr Kailash Chand.

Dr Chand, who had worked as deputy chairman of the British Medical Association, died aged 73 in July 2021.

He died after suffering a cardiac arrest six months after receiving the second dose of the vaccine. Dr Malhotra now believes the jab is to blame, despite originally branding it nonsense.

The mNRA jabs, made by Pfizer and Moderna, have been linked to a rare heart complication called myocarditis.

But the risk of the heart-inflammation condition appeared highest in younger people, especially boys.

It sparked a huge debate over the merits of vaccinating children, given that their risk of falling seriously ill with the virus is tiny.

Health chiefs eventually approved jabs for the over-fives after data showed the benefits were still greater than the risks — but stressed the offer was non-urgent.

Myocarditis was not spotted in trials of the jabs because the pools of those given the jab were too small. It was only when the jabs had been rolled-out more widely that the side effect started to appear.