An NHS hospital trust performed its first ever ‘net zero’ operation today — in what is believed to be a world-first.

University Hospitals Birmingham NHS Foundation Trust reduced its carbon footprint to almost nothing during a cancer operation at Solihull Hospital.

They also used injectable liquid anaesthetic to keep the patient asleep, rather than gas.

Carbon emissions dropped by 80 per cent compared to a normal bowel cancer operation, with the rest offset by planting trees.

The project was conducted as a way of showing how green policies can be carried out across the rest of the health service.

The NHS as a whole accounts for 6 per cent of Britain’s total carbon footprint.

Operating theatres make up a quarter of all hospital emissions, despite only 5 per cent of patients requiring surgery. 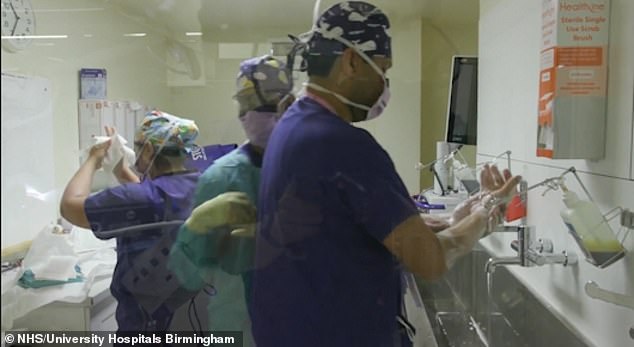 Doctors at the hospital used reusable gown, drapes, scrub caps and other items that are often worn just once for operations

‘We cannot achieve net zero health systems without making surgery more green, so this is a vital proof of concept step.’

He added: ‘We now hope to work with colleagues across the UK to create a wider impact across the whole NHS.’

Doctors at the hospital used reusable gown, drapes, scrub caps and other items that are typically worn just once for operations and then binned.

This delivery method can be just as safe and effective as inhaling gas, so long as the doctor is adequately trained.

The two surgeons performing the surgery ran and cycled to work respectively instead of using their cars.

The carbon footprint was calculated using a tool designed especially for the occasion by by experts at the University of Birmingham led by Dr Dmitri Nepogodiev.

Three trees were planted in the hospital grounds to make up the final 20 per cent needed to reach net zero.

Tim Jones, chief innovation officer at UHB, said: ‘I would like to thank Aneel and his colleagues for their work on delivering the first net zero operation in the NHS.

‘As a large NHS organisation, we know UHB has a significant carbon footprint, but we are committed to reducing this as much as possible whilst still providing the care and treatment our patients need.

‘I hope this net zero operation is the first of many, not just at UHB but across the NHS.’

‘We know that climate change and air pollution has wide impacts on health, many of which aren’t measurable until years to come.

‘I would want my operation in a hospital that cares about the environment, showing its commitment to patients and public health.’