NHS chiefs today warned ‘time is running out’ for the Government to launch its testing and tracing system to avoid a second deadly wave of coronavirus as it was revealed the rollout of the crucial smartphone app has been delayed for weeks.

Boris Johnson has set a ten-day target to deliver the system that could allow the lockdown to be eased from June 1. He said a 25,000-strong army of trackers had been recruited to identify the contacts of infected victims and prevent outbreaks.

But Niall Dickson, chief executive of the NHS Confederation – which represents organisations across the healthcare sector, has written to Health Secretary Matt Hancock because his members are ‘concerned’ over an apparent lack of a clear strategy.

‘We would therefore urge you to produce such a strategy with a clear implementation plan ahead of any further easing of the lockdown,’ Mr Dickson said in his letter. He said Mr Johnson’s plan to launch the system by June 1 was ‘very much welcome’. ‘But delivery and implementation will be critical, and we await further details,’ he added.

A new app has been tested on the Isle of Wight but its rollout has been delayed for weeks because of security flaws and it failed to work on all types of smartphone. It was also revealed yesterday contact tracers have been receiving shambolic and inadequate training and outsourcing firm Serco, one of the companies training them, was forced to apologise after accidentally sharing the email address of 300 of its recruits. One whistleblower said they are getting paid to sit around doing nothing for days on end and said they had ‘never been so bored in their life’.

There were fears yesterday that the virus could take hold again as social distancing failed at many beaches and parks yesterday on the hottest day of the year so far yesterday. Critics called the huge crowds in Southend, Brighton, Bournemouth and Tynemouth ‘a national disgrace’. Devon and Cornwall Police said yesterday that parts of both counties were swamped with daytrippers yesterday.

Test, track and trace – TTT – the means testing people for coronavirus, tracking the spread of the virus, then tracing the people with whom an infected person has come into contact, is seen as the only way out of the crisis and to prevent a second spike in coronavirus cases.

Health officials began contact tracing for every positive diagnosis of coronavirus following the first confirmed cases in January. Widespread contact tracing was controversially abandoned in mid-March as the number of cases soared in the UK, but it is now seen as a crucial component of efforts to safely ease the lockdown while avoiding a second wave of Covid-19 infections. 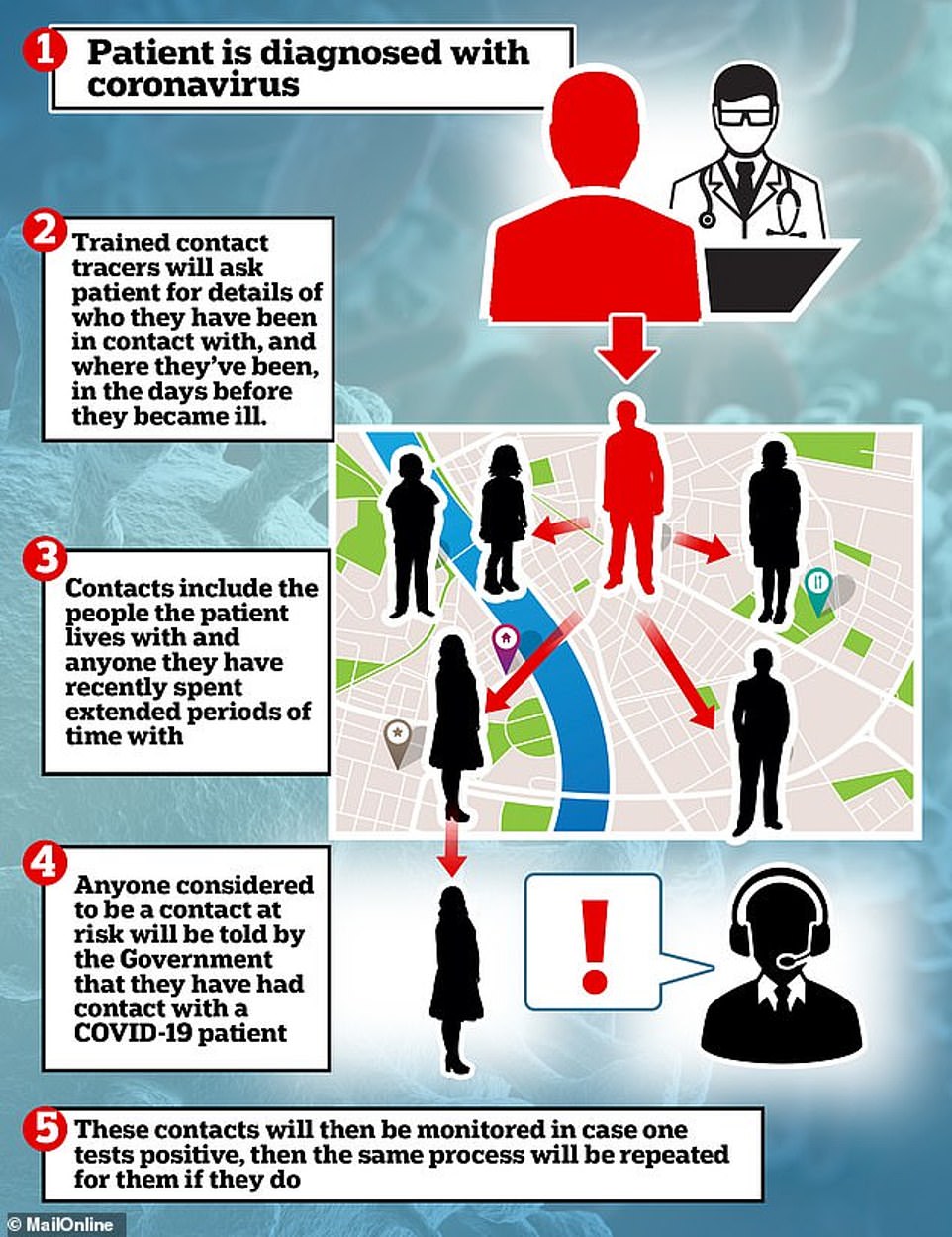 But the NHS’ crucial app has been delayed and the contact tracers and  25,000-strong army of tracers  who will also find those ill or those who have been near them (graphic of process pictured) claim they are bored and poorly trained 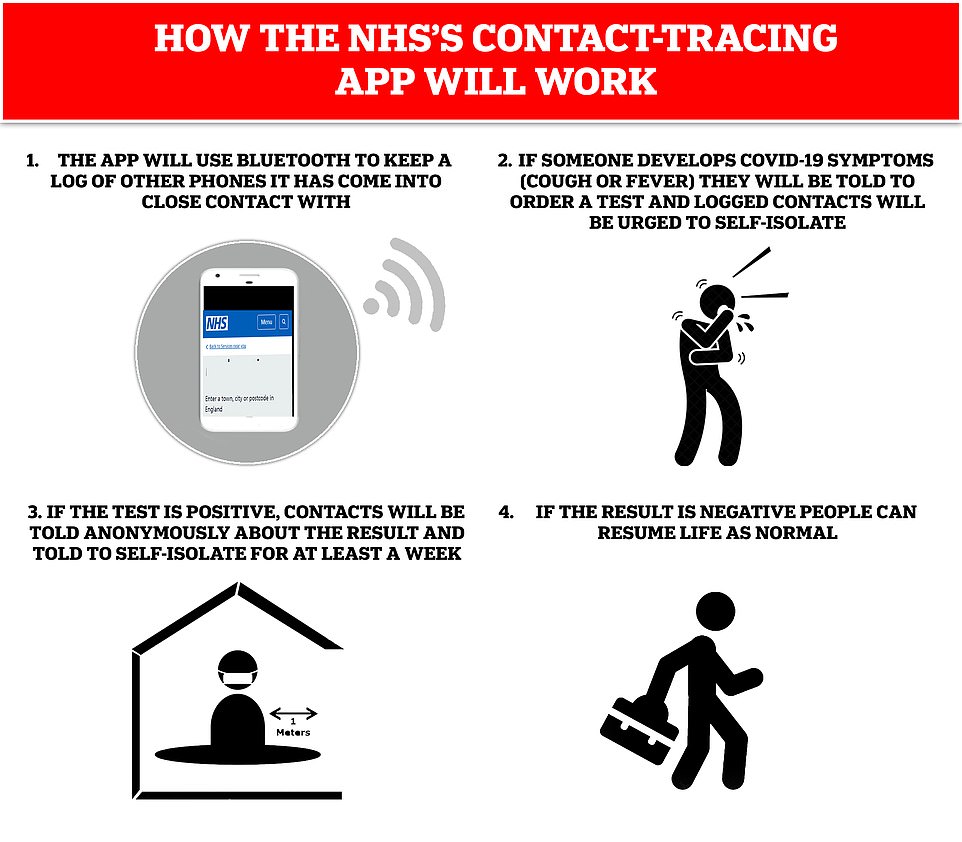 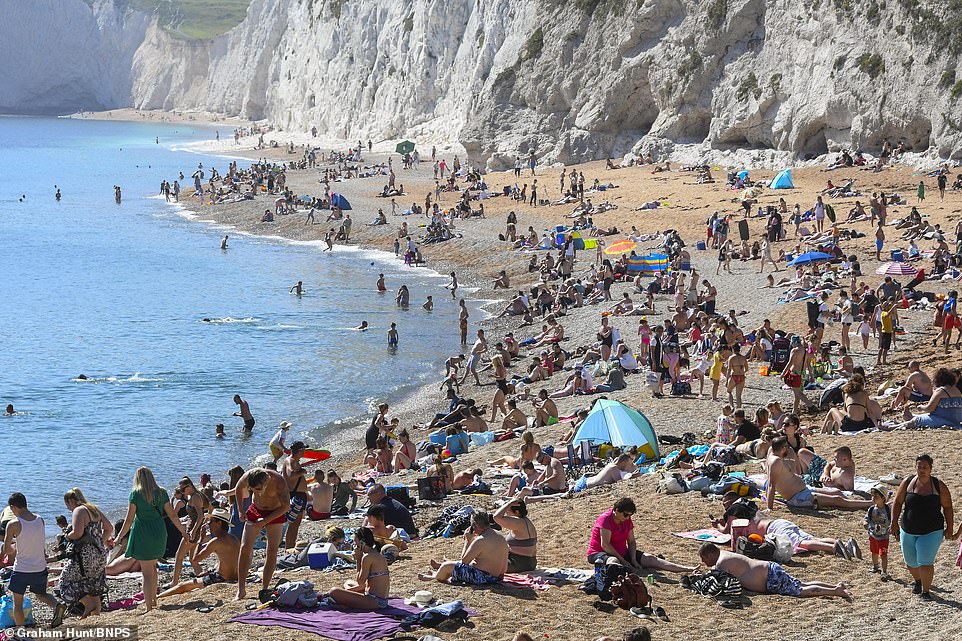 Visitors flock to Durdle Door in Dorset on a scorching day with sunbathers packed together, despite social distancing rules 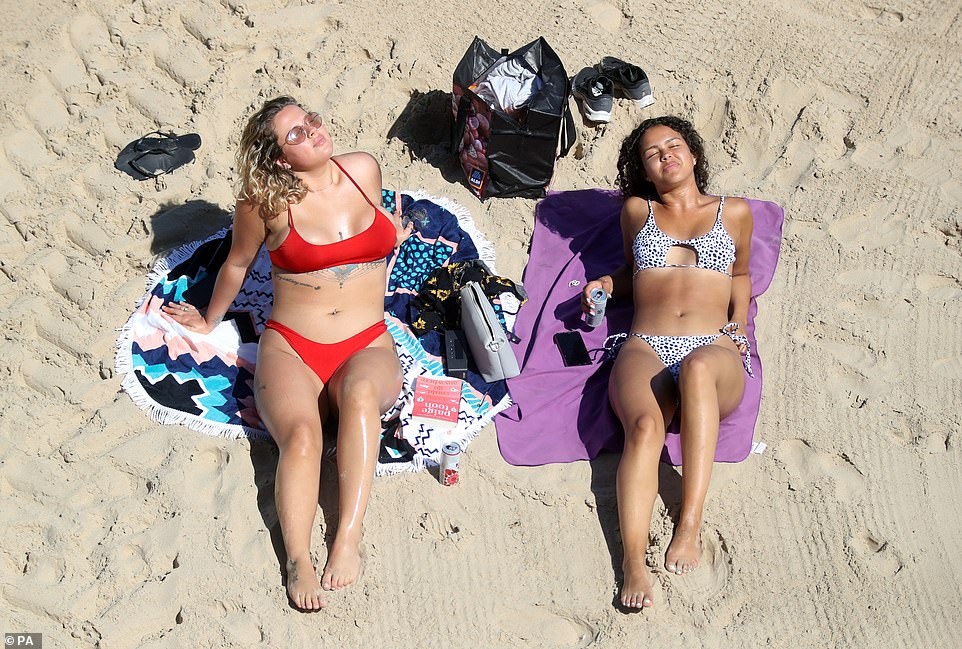 It was the hottest day in the UK so far this year and the masses were out in force with deck chairs and towels on the beach. Sorrell Vince, 23 (left) from Northampton and Bethany Heatley from Preston enjoying the sun on Cullercoats Beach, Tynemouth 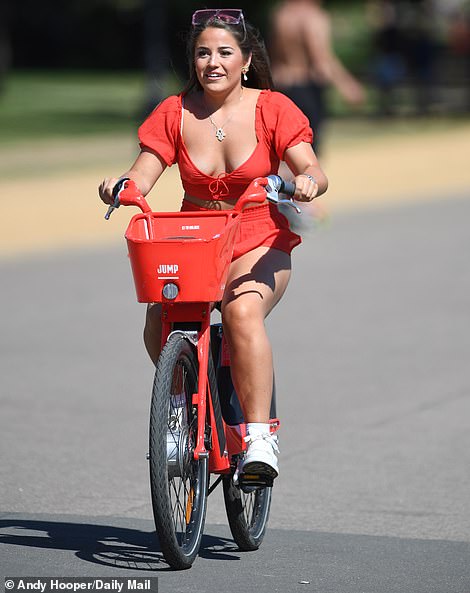 The lockdown was put in jeopardy yesterday by thousands of sunseekers who flocked to beaches (Tynemouth, right) and parks (St James’ in London) on the hottest day of the year

The Government’s scientific advisers insist the system must be in place before any more restrictions are lifted. If the scheme is up and running in time some schools and shops could reopen as early as June 1.

Rules limiting social contact could also be relaxed at that point, with a decision due at the end of next week. 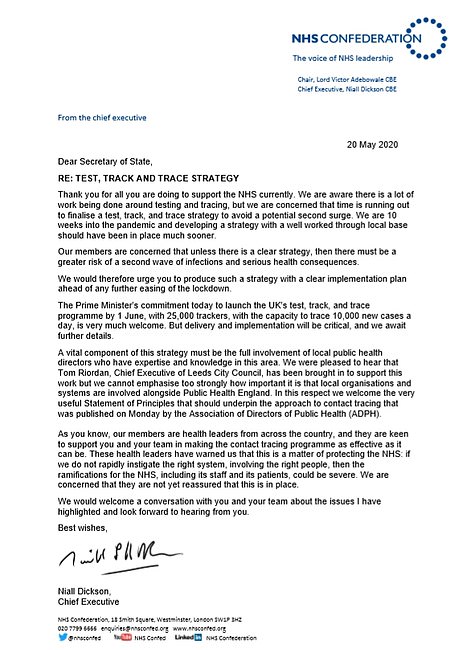 Niall Dickson, chief executive of the NHS Confederation – which represents organisations across the healthcare sector, wrote to Health Secretary Matt Hancock because his members were “concerned” over an apparent lack of a clear strategy

But the lockdown was put in jeopardy yesterday by thousands of sunseekers who flocked to beaches on the hottest day of the year.

Devon and Cornwall Police said roads in some resorts were gridlocked, despite pleas for families to stay away. ‘Any decision on the lockdown is conditional on advice that we can move forward without risking a second spike – we are not there yet,’ said a Whitehall source.

‘Hopefully the test-and-trace system will give people confidence in the measures we are taking.’ Just 637 hospital admissions for coronavirus were reported on Tuesday and no new cases at all in London for the day before.

That compares with around 1,000 a day at the peak of the pandemic. Experts cautioned that a lag in recording could see that revised upward however.

The death toll rose by 363 to 35,704 on Tuesday while tests hit a record 177,216. Mr Johnson told the Commons the tracing scheme was almost ready, despite problems with a government app that was meant to help the process.

‘We have growing confidence that we will have a test, track and trace operation that will be world-beating and yes, it will be in place by June 1,’ he said.

The UK Government abandoned it in the middle of March because of a lack of testing capacity. Mr Johnson said the army of trackers would be capable of tracing the contacts of up to 10,000 new cases a day. Anyone who contracts the virus will be asked to detail all those they have had recent contact with.

These people will then be advised to take a coronavirus test or self-isolate. Labour leader Sir Keir Starmer said the failure to conduct tracing for ten weeks had left ‘a huge hole in our defences’.

Dame Angela McLean, the deputy chief scientific adviser, said on Tuesday that all the modelling for changes to the lockdown was based on a ‘highly effective track, trace and isolate system’ being in place.

Infections expert Professor Hugh Pennington said Mr Johnson’s pledge of ‘world-beating’ tracing was good news’ but added: ‘It’s taken a long time. As to world-beating, we’ve been beaten by quite a few other countries’.

Care homes and their residents were not prioritised for coronavirus testing at the outset of the pandemic, a senior minister admitted yesterday.

Hospitals were given first place in the queue for tests, Justice Secretary Robert Buckland said.

He acknowledged ‘there are things we could have done differently’ as Boris Johnson came under increasing pressure over the rising toll of care home deaths and the allegation that the Government cleared NHS wards of elderly patients by dumping them in the homes.

A care home chief said yesterday that in one case last month an ‘aggressive’ ambulance crew threatened to call the police unless a home took an ill but untested patient back. 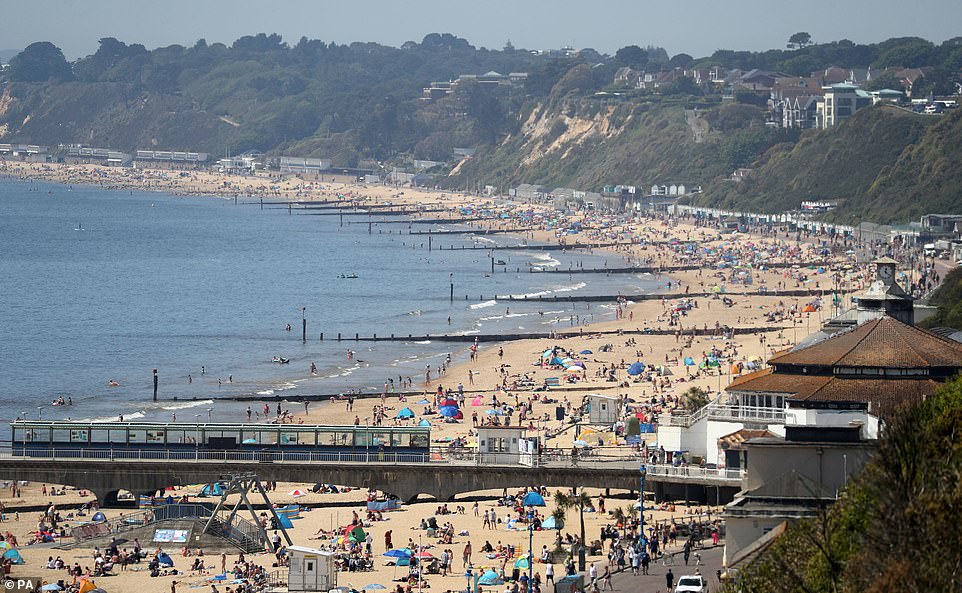 People enjoy the hot weather at a crowded Bournemouth beach in Dorset, as people flock to parks and beaches with coronavirus lockdown measures eased and temperatures set to hit 82F (28C) 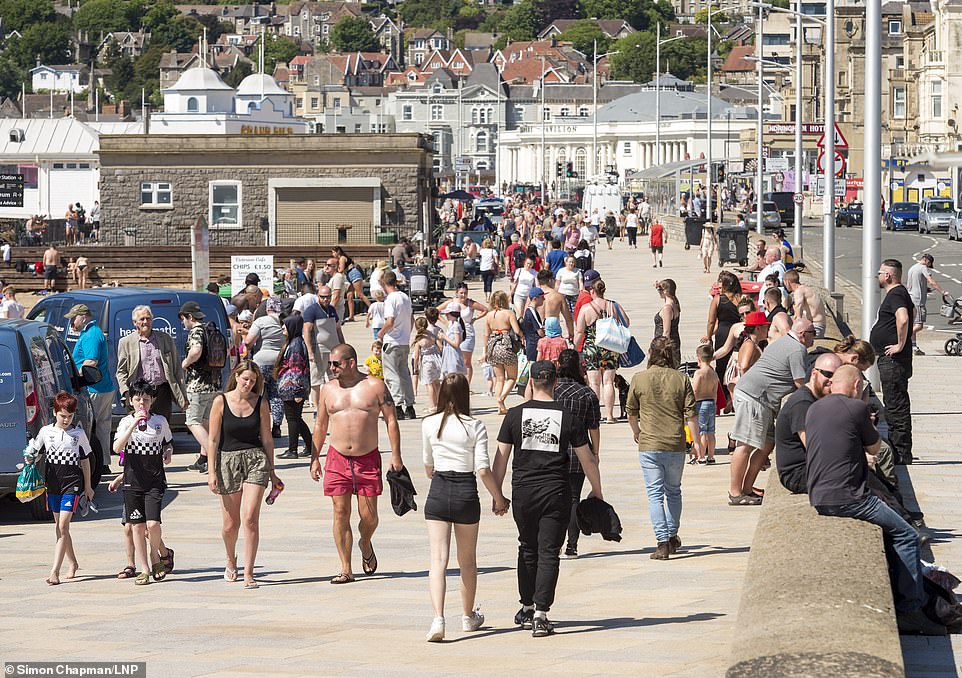 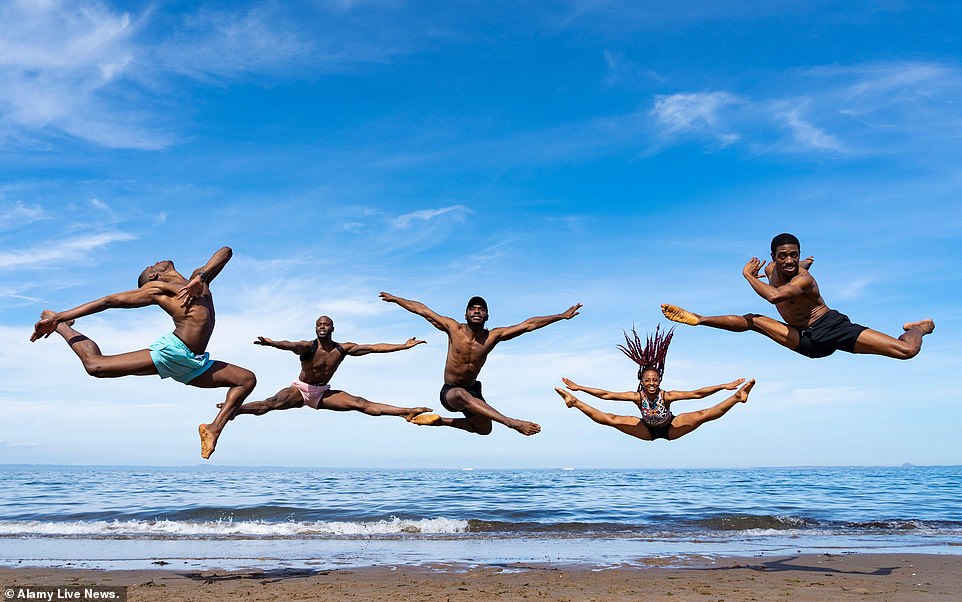 Hot sunny weather brought out large crowds to the beach in Portobello, Scotland today. Dancers from The Lion King UK Tour which was playing in Edinburgh before the lockdown, were among those having fun in the sun 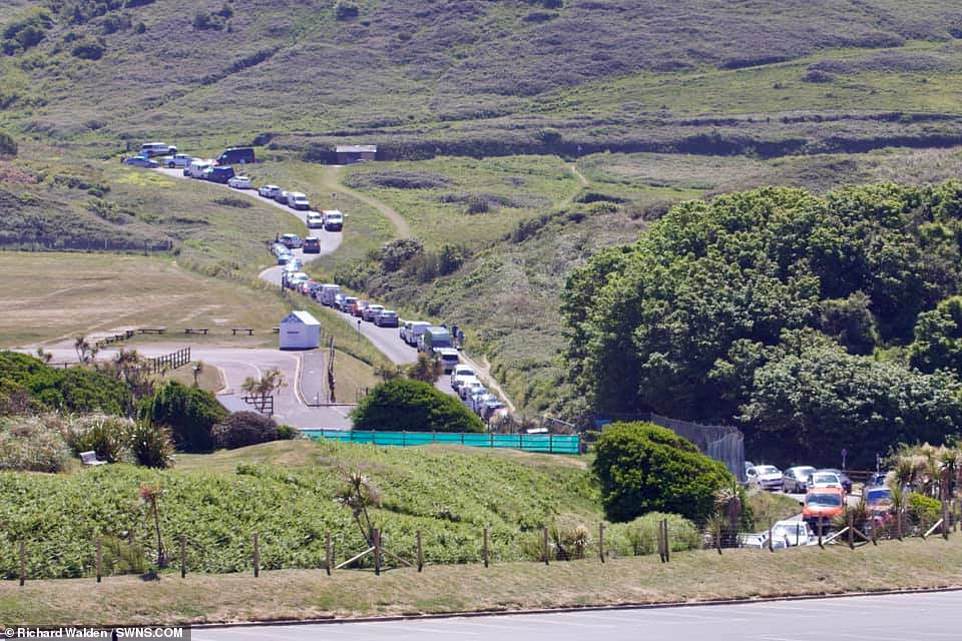 Traffic on the approach to Woolacombe, Devon. Sun-seekers have been flocking to coastal hot-spots in the Westcountry in such numbers traffic wardens have reportedly run out of tickets 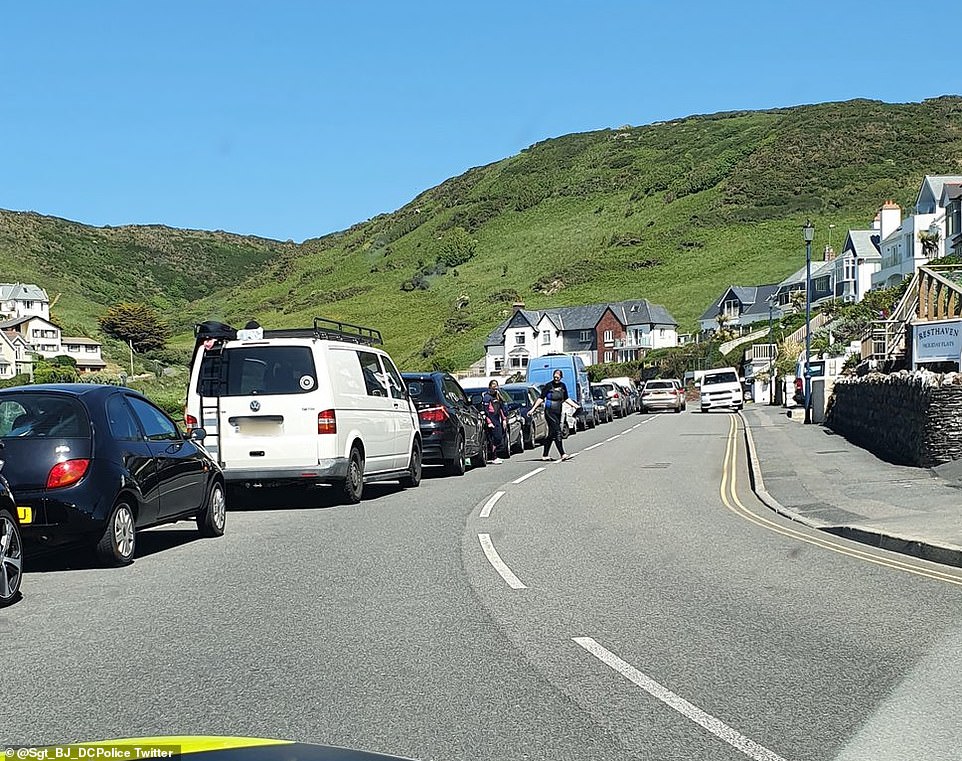 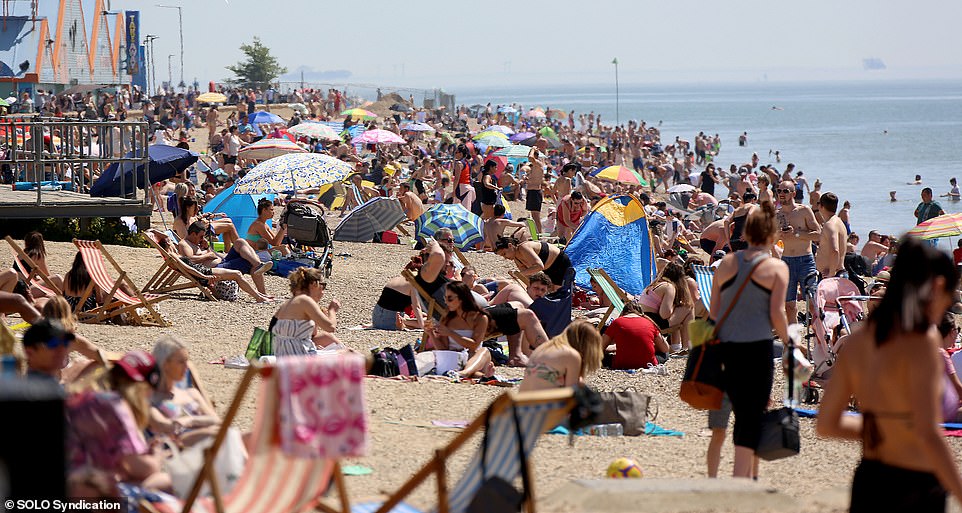 Southend beach was absolutely packed this afternoon as sun-worshipping Britons turned out to soak up the rays on what is predicted to be the hottest day of the year so far, according to the Met Office 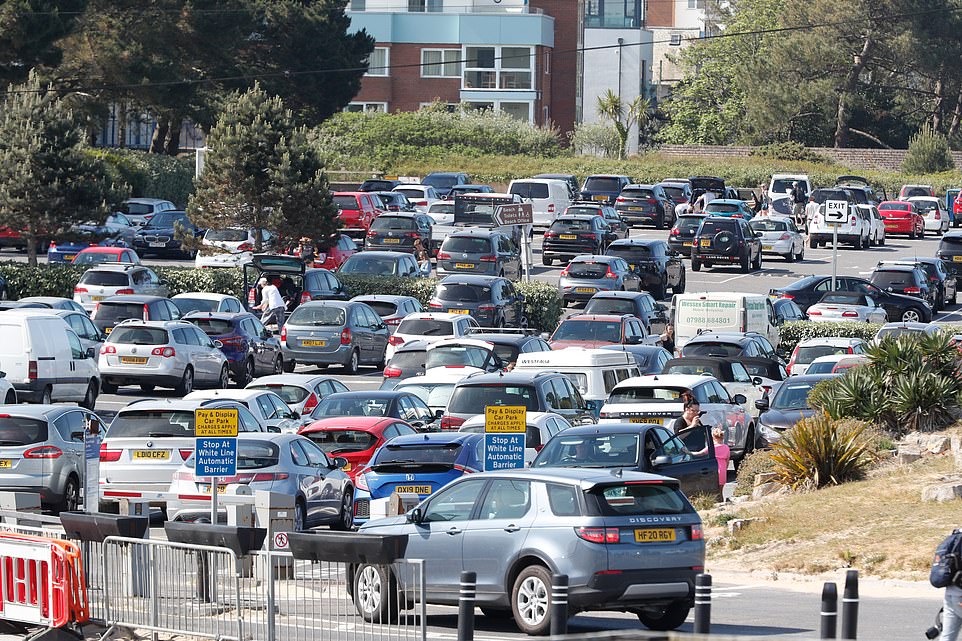 Roads and car parks were crammed full as parking restrictions were lifted several days ago and thousands of people flocked to Sandbanks in Poole, Dorset, on the hottest day of the year so far 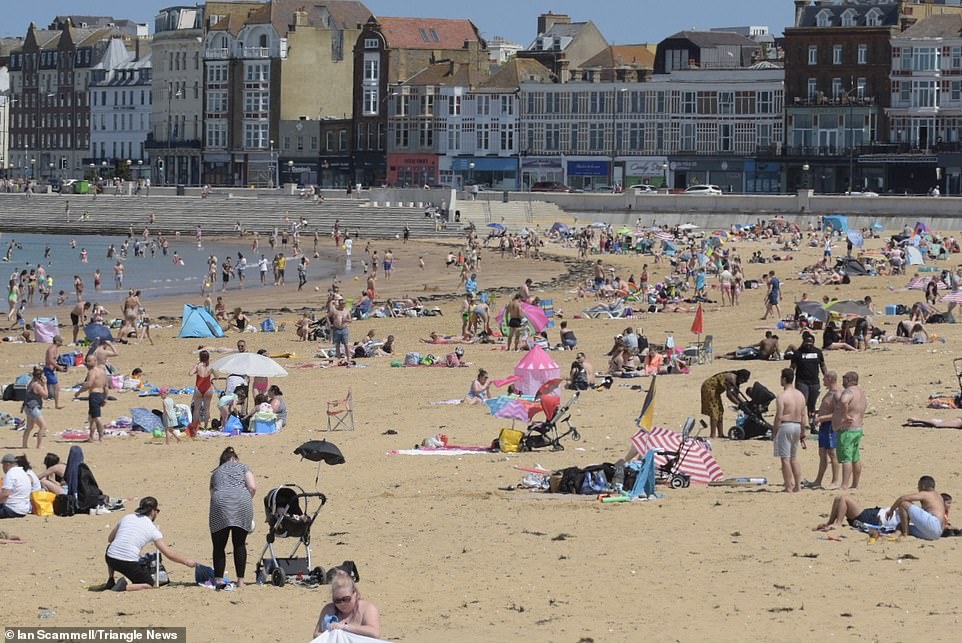 Residents and tourists enjoy the warm weather hitting Kent as Britain is set for the hottest day of the year so far. Sun seekers flocked to Margate to soak up the rays today with surrounding roads packed with cars 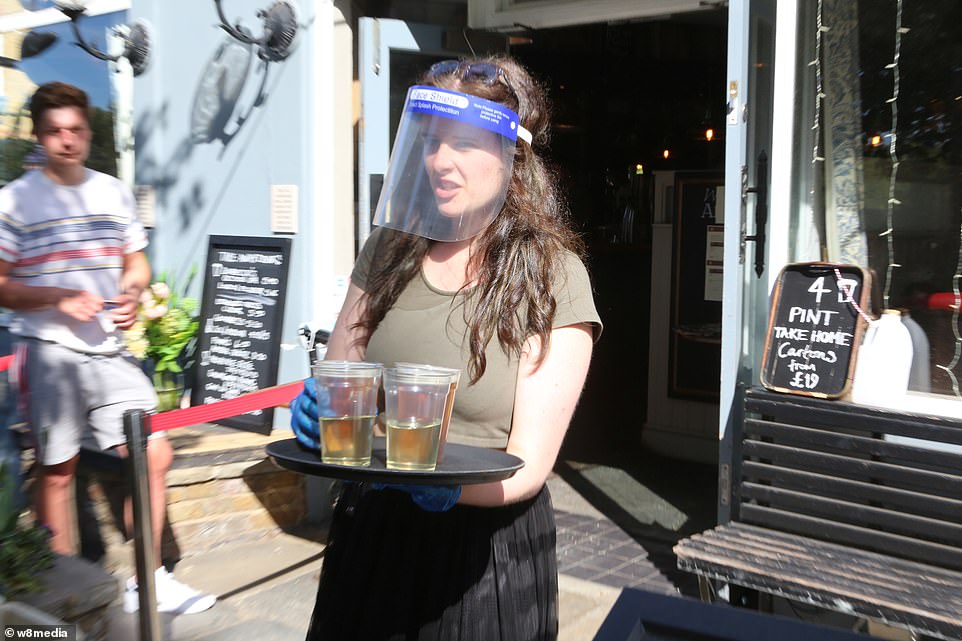 The Althorp in Wandsworth Common, London saw people enjoying drinks on the Common opposite the pub, as a woman in PPE gear handed out pints 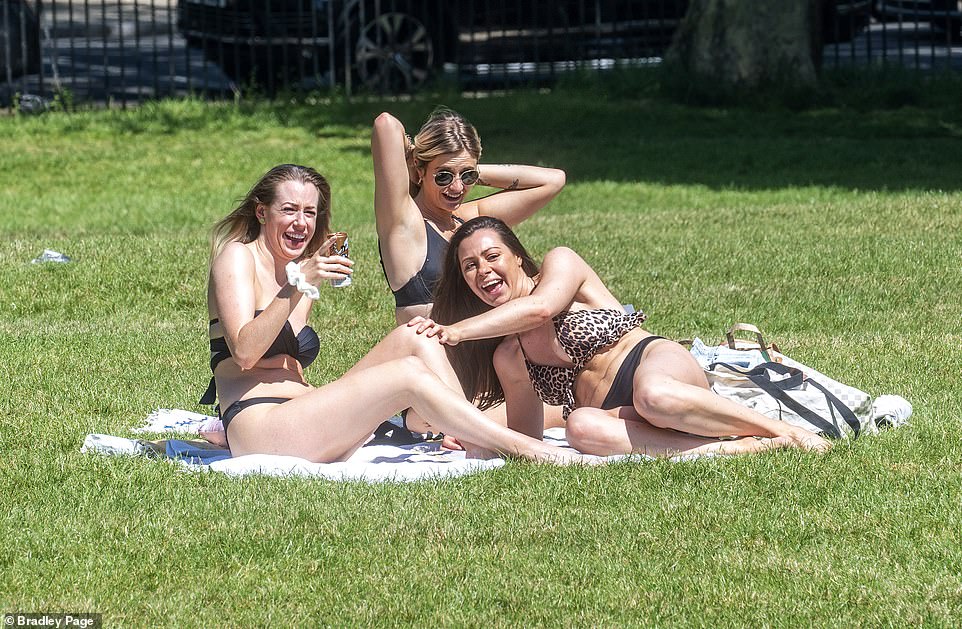 These three women enjoyed the sun as they lounged with drinks on Primrose Hill in London today, with sun-seekers all over the country taking advantage of Boris Johnson’s easing of restrictions 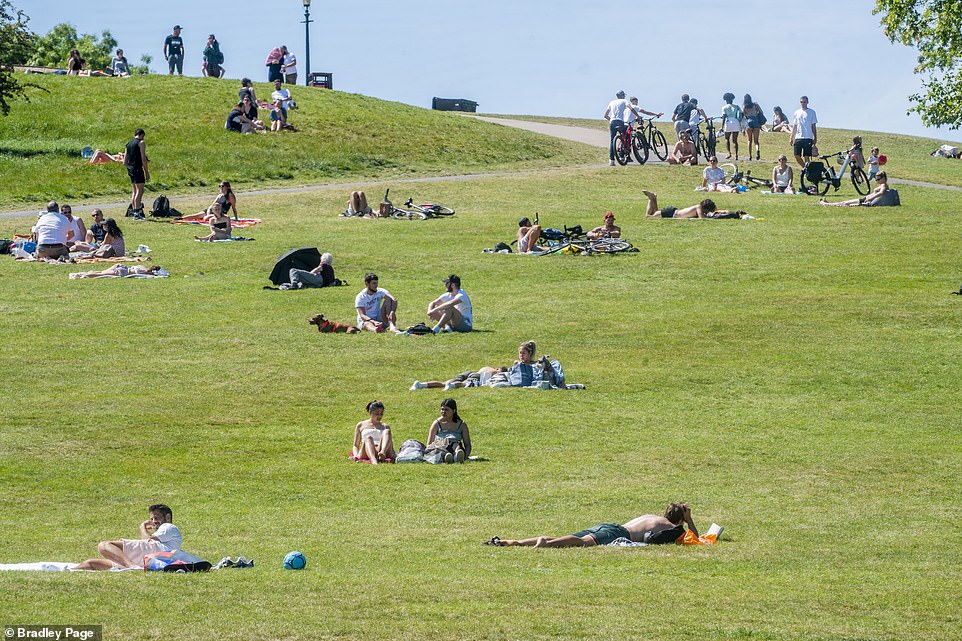 Primrose Hill was busy with sun-lovers on what was the hottest day of the year so far, though most appeared to maintain social distancing 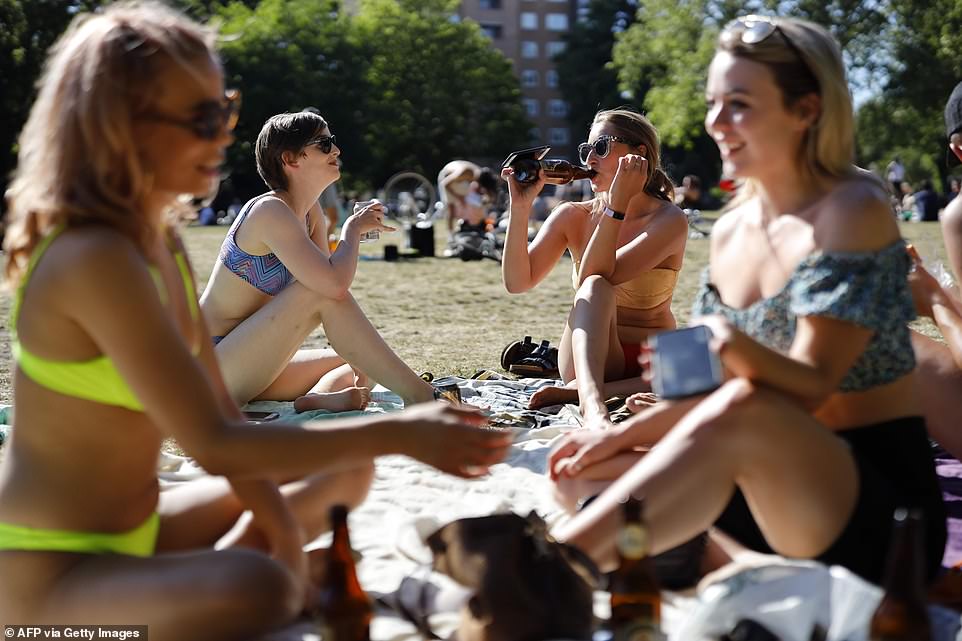 People enjoy the sunshine in London Fields, north east London on May 20, 2020, with temperatures in the capital are expected to reach 82.4F (28C) 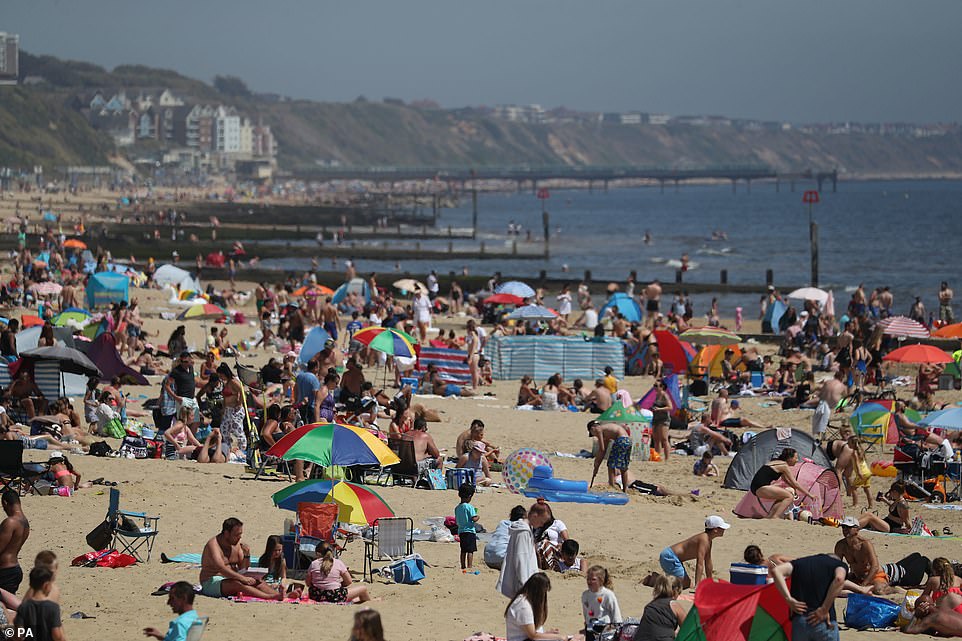 People soak up the rays at Bournemouth beach in Dorset, as Britons flock to parks and beaches as lockdown is eased 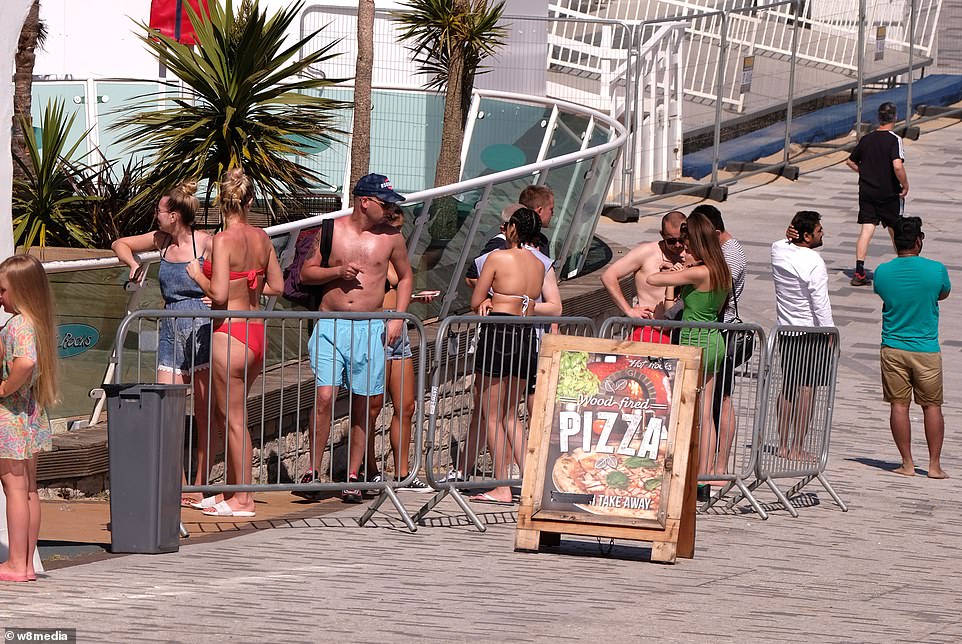 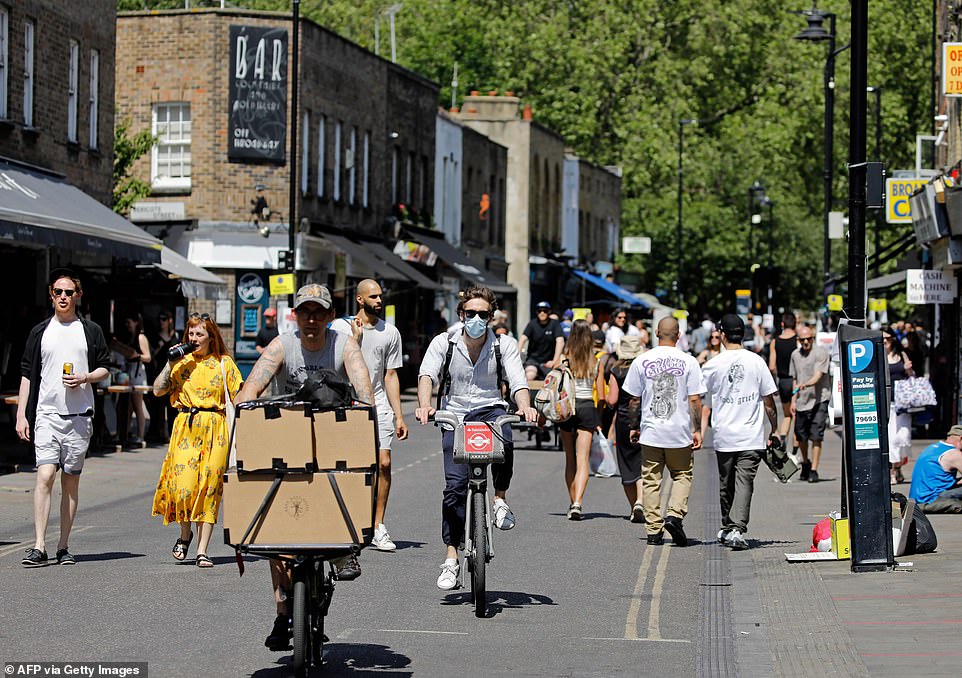 Broadway Market in Hackney, north east London was packed today, as people flocked to parks and shops to enjoy the sunshine 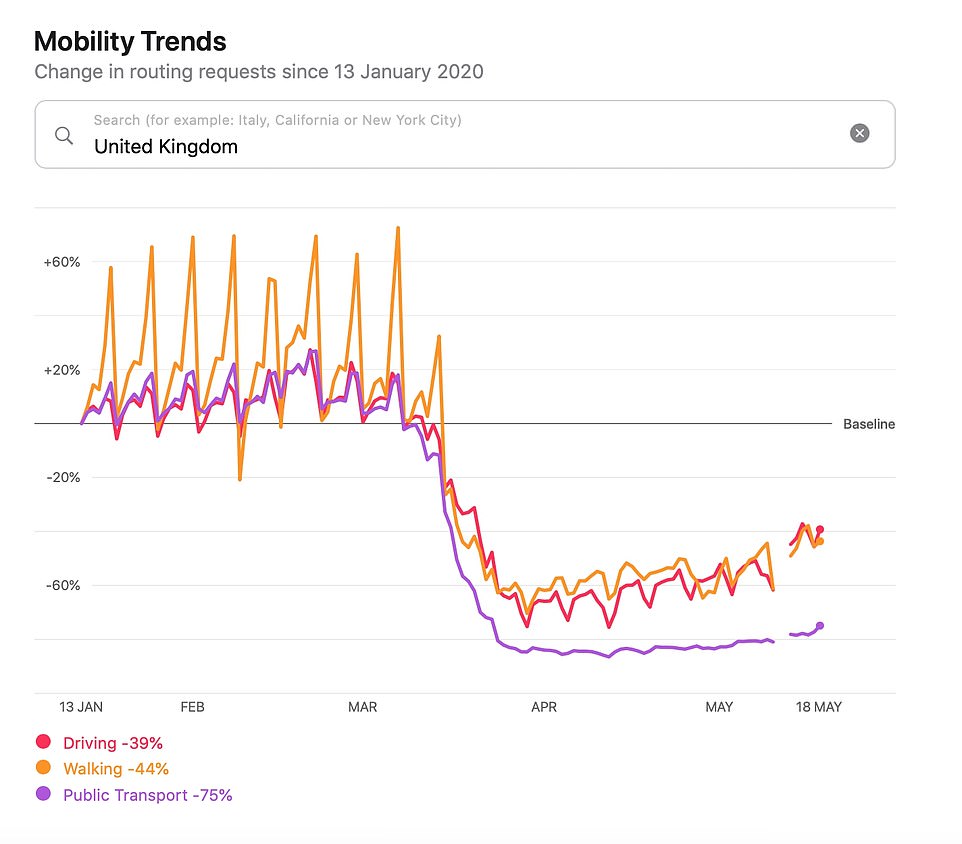 Apple mobility data shows that people across the UK are slowly starting to get back to work, with the amount of people driving, walking and taking public transport creeping back up towards baseline figures 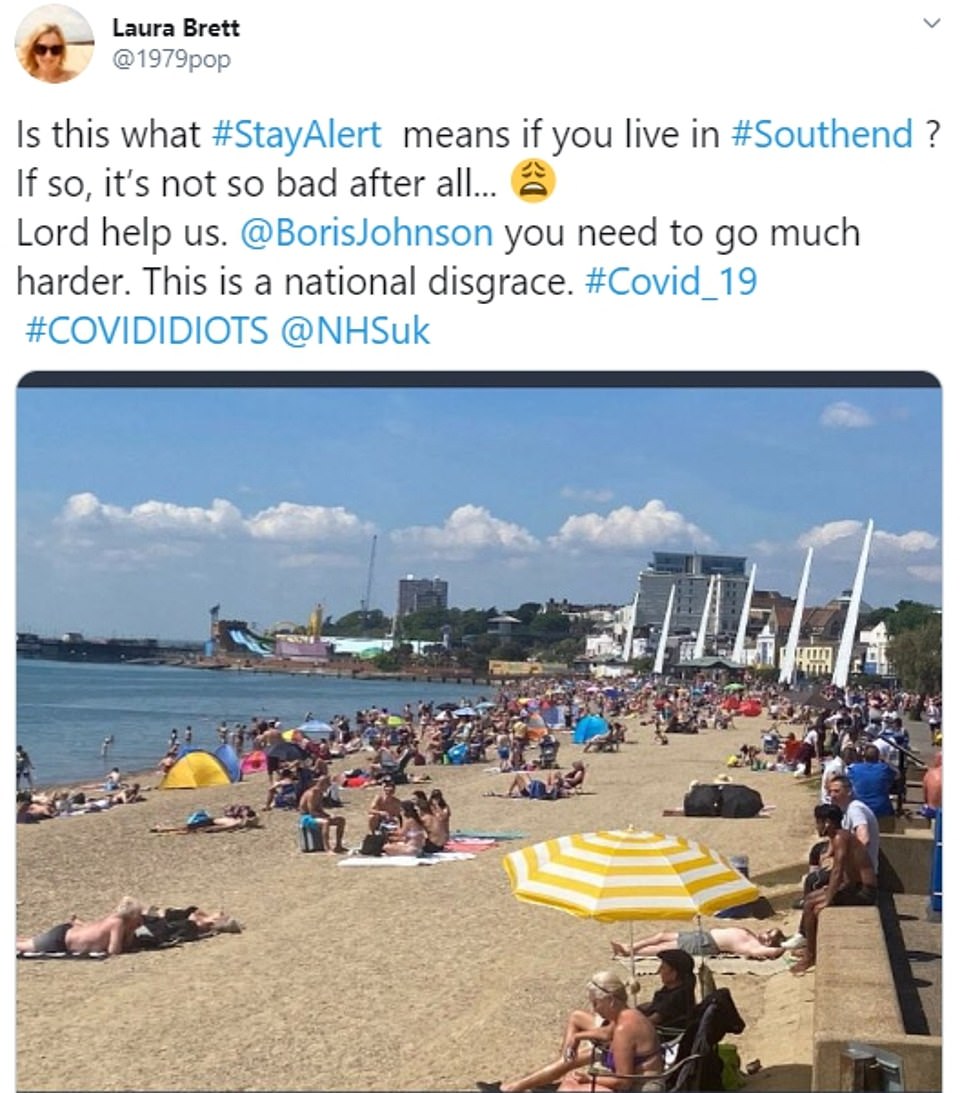 The crowded scenes at Southend beach sparked backlash on social media, with one Twitter user writing: ‘Is this what #StayAlert means if you live in #Southend? If so, it’s not so bad after all… Lord help us’ 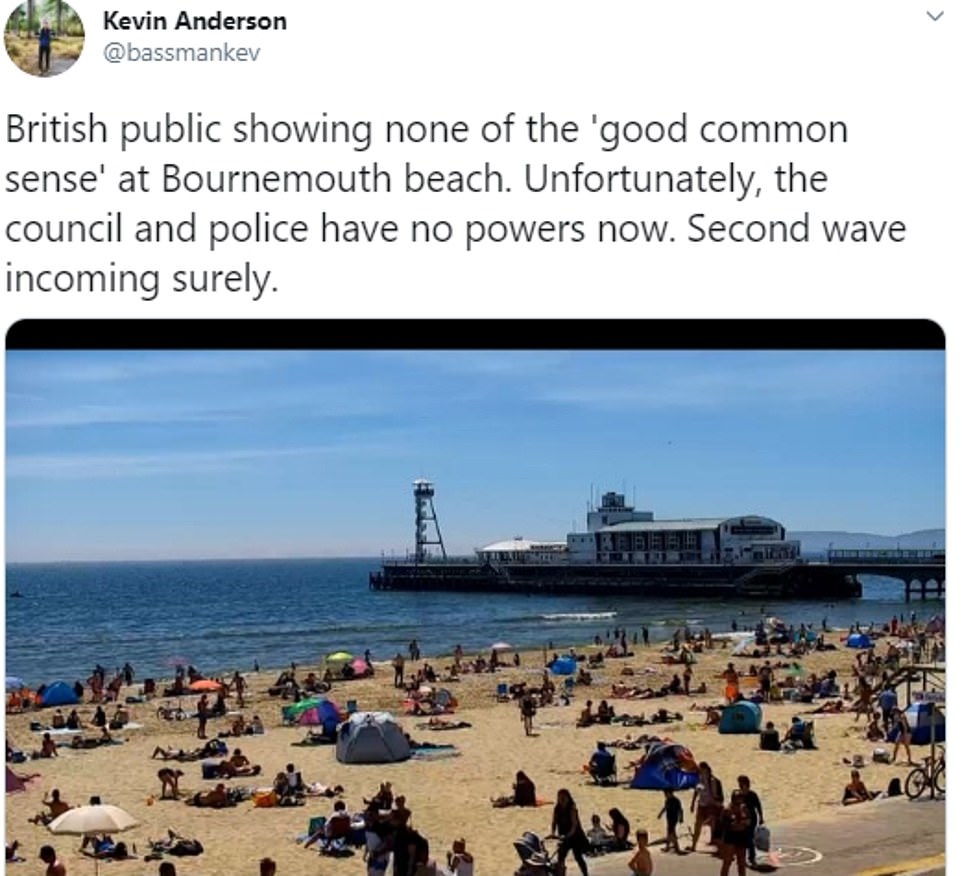 Another Twitter user posted an image of Bournemouth beach, captioning: ‘British public showing none of the ‘good common sense’ at Bournemouth beach. Unfortunately, the council and police have no powers now. Second wave incoming surely’