Thousands of Britons with an uncomfortable throat condition that causes bad breath and trouble swallowing could be cured with a 30-minute scalpel-free operation.

The only current treatment for the problem, called Zenker’s diverticulum, where food debris gets stuck in pockets of tissue in the oesophagus (gullet), has been to remove the tissue via a cut in the throat. But NHS chiefs have now approved a new technique in which tissue is shaved away using instruments passed down into the oesophagus via the mouth.

Experts say this will allow many more patients with the condition, which typically affects older adults, to be cured.

‘There are many older people living with untreated Zenker’s,’ says Dr Rehan Haidry, consultant gastroenterologist at University College London Hospital and the first doctor in the UK to carry out the surgery on the NHS.

The only current treatment for the problem, called Zenker’s diverticulum, where food debris gets stuck in pockets of tissue in the oesophagus (gullet), has been to remove the tissue via a cut in the throat

‘Many are refused surgery because it is deemed too risky, but this new method, which is straightforward and inexpensive, will reduce the number of sufferers across the UK.’

Zenker’s diverticulum affects about 3,000 Britons, usually as a result of weakened neck muscles.

The lapsed muscles cause folds of tissue to form what is known as pharyngeal pouch in the upper part of the oesophagus.

Food and liquid get stuck here, which then leads to bacteria building up, causing bad breath as well as difficulty swallowing while eating. Symptoms vary depending on how deep a pouch is formed.

In extreme cases, patients regularly choke while eating and suffer chronic coughs. In some cases, Zenker’s can cause life-threatening aspiration pneumonia – a lung infection triggered when food, saliva or other solid particles are breathed into the lungs.

In the past, Zenker’s was thought to be rare. However experts now believe that it is far more common, as many cases go undiagnosed.

Dr Haidry says: ‘Often patients will go to their GP complaining of horrible coughing, problems swallowing or really bad breath, but their doctor will dismiss this as part of old age. By our estimates, the real Zenker’s figures are double what was previously believed.’

The current procedure is performed under general anaesthetic, and requires an incision in the throat. A stapling tool is inserted through this cut and used to close the pouch. But the operation risks infection and bleeding, which makes it unsafe for some frail patients. Dr Haidry says: ‘You end up with patients living in excruciating pain for years with no treatment.’

What’s more, the staples can loosen over time, causing the pouch to re-form. 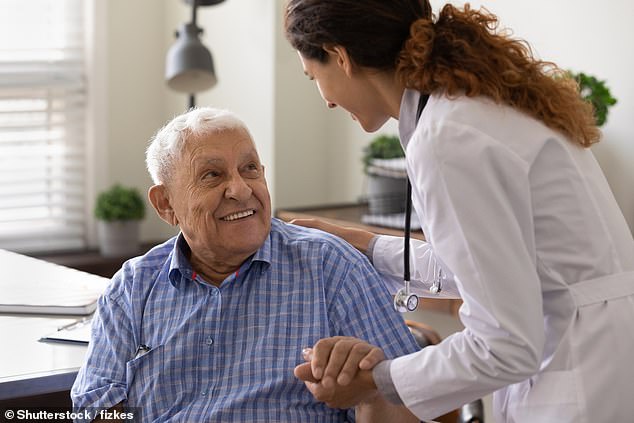 The new procedure is also performed under general anaesthetic but involves threading a tube down the throat until it reaches the pouch. A small surgical knife is attached to the end of the tube and, using a camera, surgeons cut away the excess tissue.

The procedure typically takes half an hour and patients can go home the same day.

Studies show the operation is more effective than the previous method and results in fewer side effects.

For now it is only offered at University College Hospital London, but experts say more NHS trusts will begin to use it next year. ‘It’s affordable and very easy for surgeons to learn,’ adds Dr Haidry.

One of the first NHS patients to benefit is Martin Smith, 82, from London, who was treated in September. In June, the former chartered surveyor began to struggle with swallowing his food.

‘It felt like I was choking almost every time I took a mouthful,’ Martin says. ‘It affected my breath too. It was embarrassing and made eating really difficult.’

His GP sent him for an X-ray which showed a pouch had formed in his throat. He was then referred on to Dr Haidry.

Martin went in to hospital in the morning, had the operation at 4pm and was out again after an overnight stay.

‘Since then, my throat has really improved,’ he says. ‘It felt pretty sore for a few days, but now that’s gone and I’m eating solid food again with no problems.’