The NHS is facing its own ‘Me Too’ movement after female doctors shared their experiences of sexism and sexual assault in hospitals as part of a new campaign called ‘surviving in scrubs’.

The project was launched by GP Dr Becky Cox and emergency medicine trainee Dr Chelcie Jewitt, who have both suffered harassment at work.

In its first few weeks, the campaign has already received dozens of harrowing accounts, including rape threats from patients being dismissed and being groped by male consultants on wards.

One poster described a conversation with a consultant in front of colleagues where ‘he called me “missy”, put his hand on my thigh and slid it up with his thumb on the inside’.

Another told how she was dismissed by her manager after a patient ‘made repeated and very explicit threats about how he planned to rape me and graphic sexual fantasies he had about me’.

The manager ‘laughed and said, ‘Well what do we expect, bringing a beautiful woman onto the ward?’.’

Multiple women referenced ‘Rear of the Year’ competitions in hospitals in which male staff rated female workers’ bottoms out of 10.

Dr Becky Cox is an Oxford GP specialist working in gynaecology and an academic GP with an interest in violence against women. 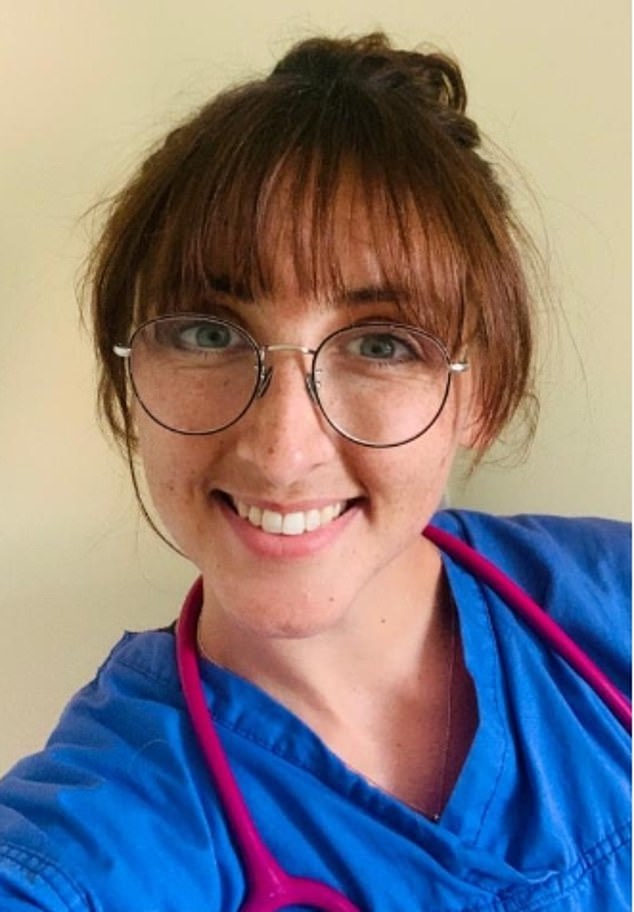 Dr Chelcie Jewitt is an emergency medicine trainee at Health Education North West, interested in health inequalities, particularly those faced by women. She was called a ‘silly little girl’ by a consultant in front of 15 colleagues.

Dr Cox and Dr Jewitt set up the campaign in response to their own experiences and their desire to change the culture of sexism.

Dr Jewitt said she has had ‘loads of sexism at work’, and told The Times: ‘The straw that broke the camel’s back was in front of a large, multidisciplinary team meeting, with about 15 people in the room.

‘A consultant called me a silly little girl. Bearing in mind, I was 28 at the time. Not silly, not a little girl.’

The website provides an anonymous platform where healthcare workers can open up about their experiences.

Another anonymous contributor to the campaign said they became aware of a competition between male doctors on the stroke ward of a hospital to see who would be first to sleep with a whole multi-disciplinary team.

They said: ‘I found out as one had been boasting about how he’d already ticked physiotherapist, nurse and dietician off his list and had recently been texting a speech and language therapist.’

More than 90% of female doctors have faced sexism at work

More than 90 per cent of female doctors have reported experiencing sexism at work, a report warned.

But just a quarter of those who either went through it or witnessed it have raised the issue, the survey by the British Medical Association (BMA) last August suggested.

The BMA said the statistics were ‘appalling’ and that their report into the problem makes for ‘shocking’ reading.

Their survey of more than 2,000 doctors found that 84 per cent of all respondents felt there was an issue of sexism in the medical profession and almost three-quarters believe sexism acts as a barrier to career progression.

More than half (56 per cent) of female doctors said they had received unwanted verbal conduct relating to their gender and almost a third (31 per cent) experienced unwanted physical conduct in the workplace.

The equivalent figures for men were 28 per cent and 23 per cent respectively.

One female junior doctor told the BMA: ‘I have been asked to massage consultants’ shoulders during surgical multidisciplinary team working.’

More than a quarter (28 per cent) of men who took part in the survey said they have or had more opportunities during training because of their gender, in comparison to just 1 per cent of women respondents.

A trainee on a course said a male consultant feigned concern that she was too drunk and walked her back to her accommodation and sexually abused her.

They said: ‘He invited himself in and suddenly turned on me sexually. I couldn’t stop him.

‘Afterwards he said nasty and humiliating things and laughed uncontrollably when I saw him next. He told some of his colleagues what he had done.’

The trainee said another consultant told her: ‘I reckon it’s only a matter of time before one of my sons violates some woman.’

She told of being ‘trapped’ in the back of the ambulance with her male colleague, where he would ‘accidentally’ walk into her, ‘including hands touching me by ‘accident’ while she was providing patient care.

When she spoke up, a trusted colleague told her: ‘Well that’s X for you, don’t let it bother you.’

She said the culture in her former workplaces around sexual misconduct is ‘abhorrent’.

She told Surviving in Scrubs: ‘It is normalised, accepted and victims or survivors are gaslighted and left without compassion or support.’

Dr Cox and Dr Jewitt have written to the General Medical Council, a public body maintaining the official register of doctors in the UK.

They want the GMC to make an  ‘explicit statement’ advising doctors not to behave in a sexist or misogynistic manner and treat female colleagues with respect’, The Times reported.

Currently, the body only advises doctors must ‘treat colleagues fairly and with respect’ and doesn’t make any mention of sexism or misogyny.

But, a draft version of new guidance to doctors says: ‘You must not demonstrate uninvited or unwelcome behaviour that can be reasonably interpreted as sexual and that offends, embarrasses, humiliates, intimidates, or otherwise harms an individual or group.’

One poster described a patient who ‘threatened to follow me to the car and rape me then kill my family’.

When she raised this to a female senior staff member, she was told: ‘Oh he’s drunk, just ignore him, you’re overreacting.’

The poster said she had ‘nightmares for weeks’ and fears walking out to her car alone after a late shift.

Another female doctor said that a consultant surgeon ‘followed me to the car park, grabbed me and tried to drag me into his car saying he wanted me to try out the seats’.

He only stopped because another surgeon walked past. When she told her clinical supervisor, he ‘laughed, called in some of the other consultants to theatre to joke about it and asked me if I needed counselling, then told me to toughen up as it happens to a lot of the girls’.