NHS England’s chief executive was today accused of ‘abusing’ Covid statistics after exaggerating the number of infected patients in hospital with the virus.

During a round of interviews this morning, Amanda Pritchard suggested there were ’14 times’ more coronavirus patients in hospital now compared to ‘this time last year’.

The claim was picked up and circulated by a number of mainstream, left-leaning news outlets including Sky News, ITV and The i.

Ms Pritchard made the comments as she urged people to come forward for their booster vaccines and warned the health service was under ‘very real pressure’.

Yet latest data from the Government’s dashboard shows there were 800 average daily coronavirus admissions and 7,000 inpatients in England on Friday.

This time in November 2020, for comparison, the country was recording about 1,300 Covid hospitalisations each day and there were more than 11,000 patients in hospital with the disease.

NHS England was later forced to clarify that Ms Pritchard was referring to statistics from the start of September, when Covid hospital rates were in fact higher than the same time last year.

Other researchers warned that the NHS chief executive had ‘abused’ the figures while political commentators said it was either the result of ‘incompetence or mendacity’.

During a round of interviews this morning, Amanda Pritchard suggested that there were ’14 times’ more coronavirus patients in hospital now compared to ‘this time last year’. Yet latest data from the Government’s dashboard shows there were 800 average daily Covid admissions on November 3, compared to almost 1,300 at the same point last year 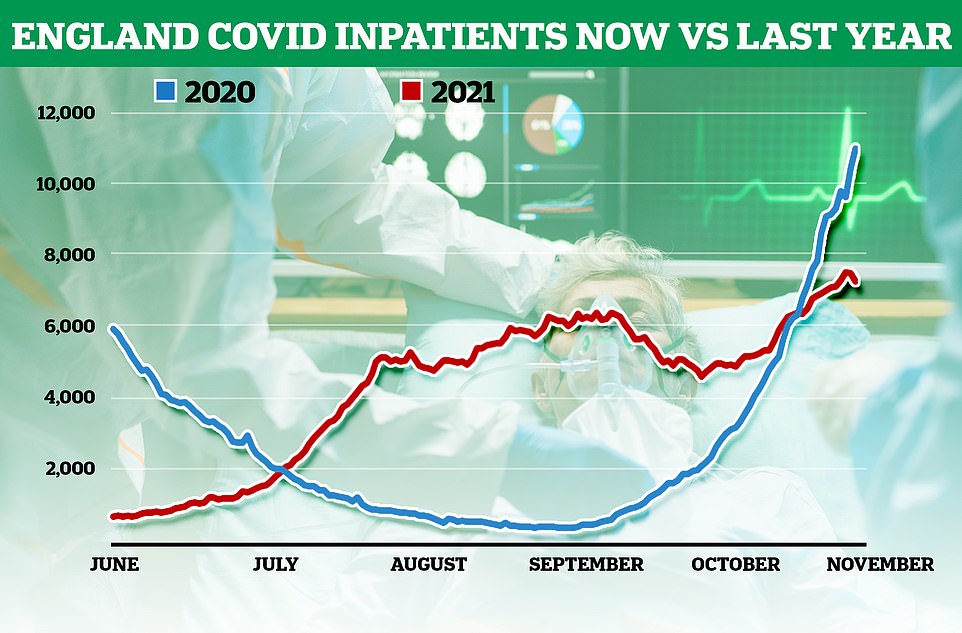 There were 7,000 inpatients in England on Friday compared to more than 11,000 patients in hospital with the disease on November 5 2020 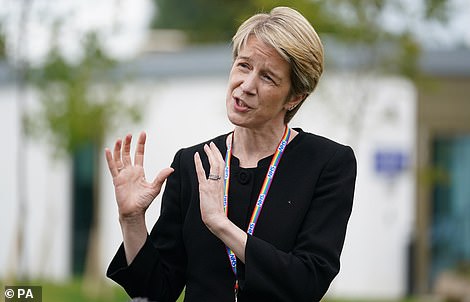 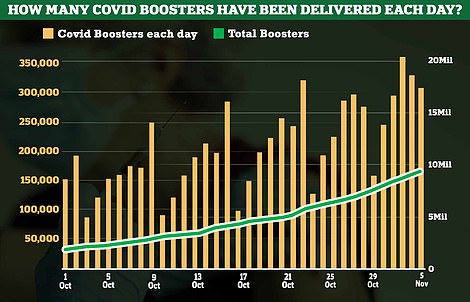 Ms Pritchard (left) made the comments as she urged people to come forward for their booster vaccines (progress, shown right) and warned that the health service was under ‘very real pressure’

Paul Mainwood, an Oxford University-educated physicist who challenged Ms Pritchard’s claim, tweeted to his 8,000 followers: ‘For those who have no idea what I’m on about. The Chief Executive of NHS England abusing statistics…’

Speaking to Sky News about the current NHS pressure, Ms Pritchard said: ‘We have had 14 times the number of people in hospital with Covid than we saw this time last year.

‘And the things we encourage people to do is anything they can do to protect themselves, so that’s the Covid vaccine, it’s the flu vaccination in particular.’

NHS England claimed that the figures quoted by Ms Pritchard were in reference to August, and weren’t meant to reflect the current situation.

NHS workers should be forced to get two doses of the Covid vaccine before winter, disgraced former Health Secretary Matt Hancock said today.

Mr Hancock — who quit in June after breaching his own social distancing rules by kissing a married colleague — said the move would act as another ‘tool to save lives’ during what is projected to be a harsh winter for the health service.

He also scorned NHS staff who are still not vaccinated and don’t have a valid medical reason, warning that it was their ‘moral duty’ and that they had ‘ignored all the scientific and clinical advice’.

Ministers have for weeks been considering whether to make Covid jabs compulsory within the health service after pushing through the requirement for care home workers in the summer.

But last week the Health Secretary Sajid Javid appeared to push back the plans until April after being warned by  NHS bosses that introducing the policy now could leave hospitals understaffed at a crucial period.

There are also concerns about whether the move is even necessary, given that more than nine in 10 NHS staff are already vaccinated.

Writing in the Daily Telegraph, Mr Hancock, who was Health Secretary for three years, warned ministers against delaying compulsory vaccinations for the sector into the new year.

He said: ‘Having looked at all the evidence, I am now convinced we must require vaccination for everyone who works not just in social care but the NHS — and get it in place as fast as possible… So as we prepare to a face a difficult winter, let’s use all the tools we have to save lives.

‘Imagine the cancer patient, already battling another deadly disease, being cared for by a nurse. Who can put their hand on their heart and say they’d be happy to tell that patient their nurse could have the vaccine, but has chosen against all scientific and clinical advice to ignore it.’ Mr Hancock said doctors and nurses had a ‘moral duty’ to get the Covid vaccine to protect their patients.

But the Government’s own Covid dashboard is based on hospital data provided by NHS England and goes up to November 5, slightly behind real time due to a recording lag.

Christopher Snowdon, from the rightwing think-tank the Institute of Economic Affairs, said in a blog post: ‘The idea that NHS England does not have access to figures that are updated every day on the dashboard is preposterous.’

Assessing the true pressure of Covid on the NHS has been made difficult because medics argue that other pandemic factors — like social distancing and isolation rules — have a knock-on effect on their ability to treat non-Covid patients.

They are also under additional pressures due to the huge backlog that has amassed during the pandemic.

But Boris Johnson has resisted calls from senior NHS officials to activate the country’s winter ‘Plan B’, which would see the return of compulsory masks and working from home, as well as vaccine passports.

Defending the decision to hold off during a visit to a hospital in Northumberland today, Mr Johnson said he is often presented with ‘different scientific advice and different scientists say different things’.

The Prime Minister added: ‘We study the data every day, we have reviews with NHS chiefs every day.

‘The key thing you want to do is to reduce those pressures, which are building, on the A&Es, on beds, by encouraging people, particularly the over-50s, to come forward and get your booster jab.’

Sajid Javid, the Health Secretary, angered NHS bosses last month when he claimed that the current pressure on the health service was not ‘unsustainable’.

Neither the Government nor health chiefs have put a threshold on the number of admissions or inpatients that the NHS could handle this winter.

But Ms Pritchard herself admitted last month to MPs that the health service has never been overwhelmed during the pandemic, even in the depths of winter last year at the peak of the second wave.

Across the UK, daily Covid cases are already in steep decline despite schools returning from half-term at the start of the month.

In all but one day, infections have seen a week-on-week fall every day since October 23 and there are 35,000 on average now compared to around 45,000 in mid-October.

Professor Jim Naismith, director of the Rosalind Franklin Institute at the University of Oxford, joined a chorus of independent scientists in claiming that Britain’s third wave has already peaked.

He said he expects hospitalisations and deaths — both of which are lagging indicators — to follow in the coming weeks.

Professor Naismith told BBC Radio 4’s Today programme: ‘In terms of cases we certainly appear now to be going down quite quickly and that’s certainly what we would hope.

But he added: ‘Of course, as cases fall we would expect the other two things to fall in time.’ 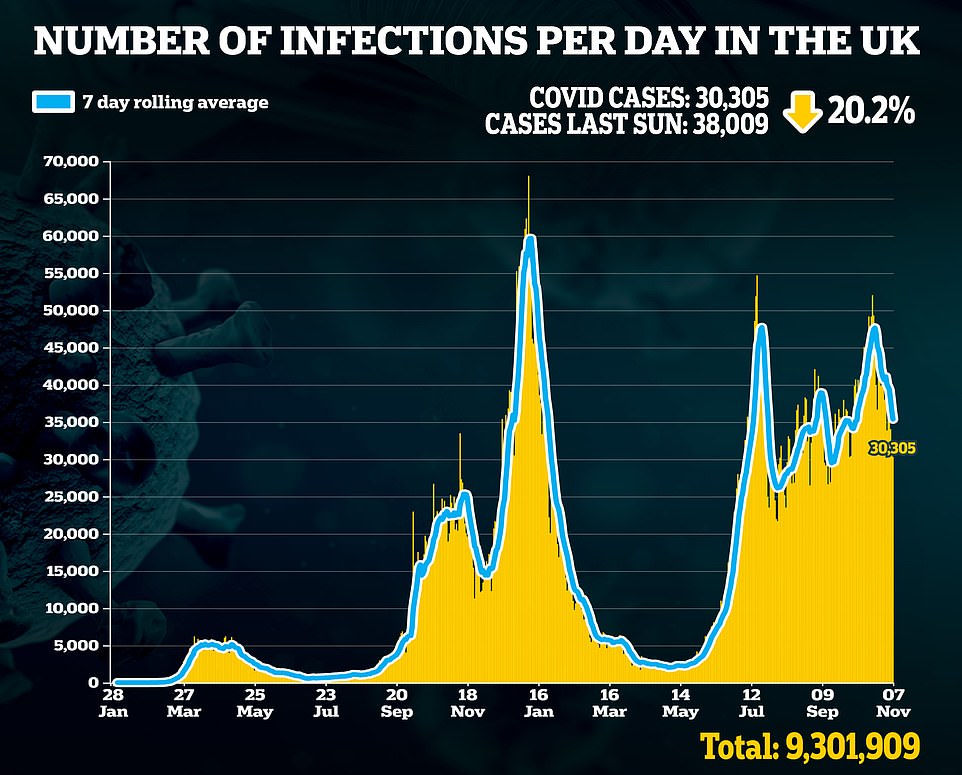 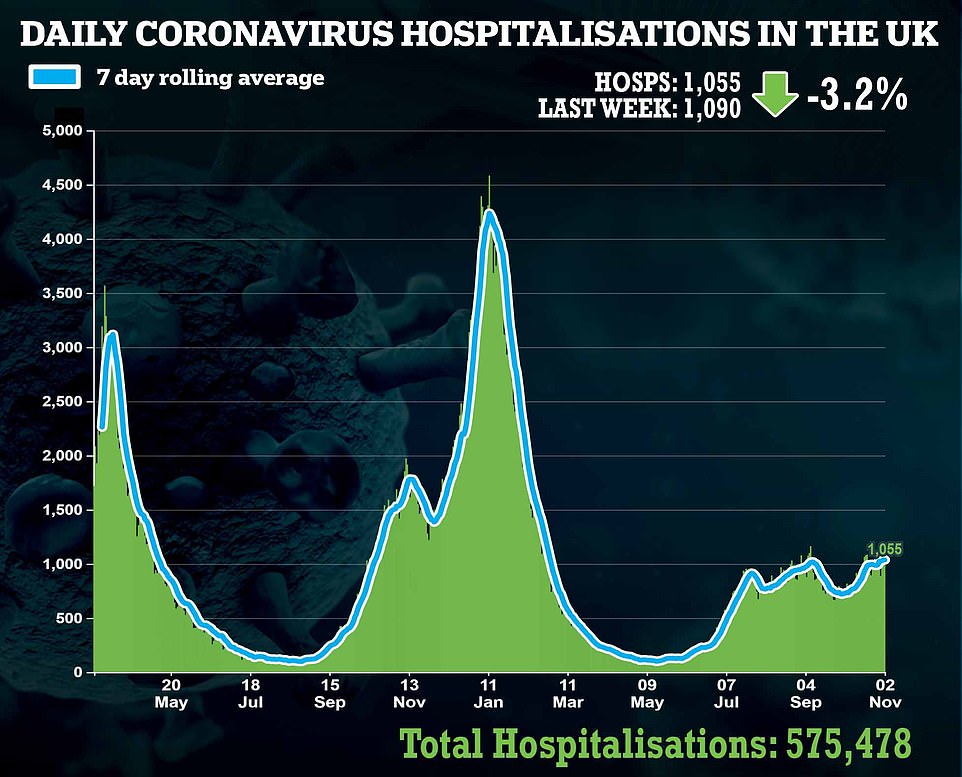 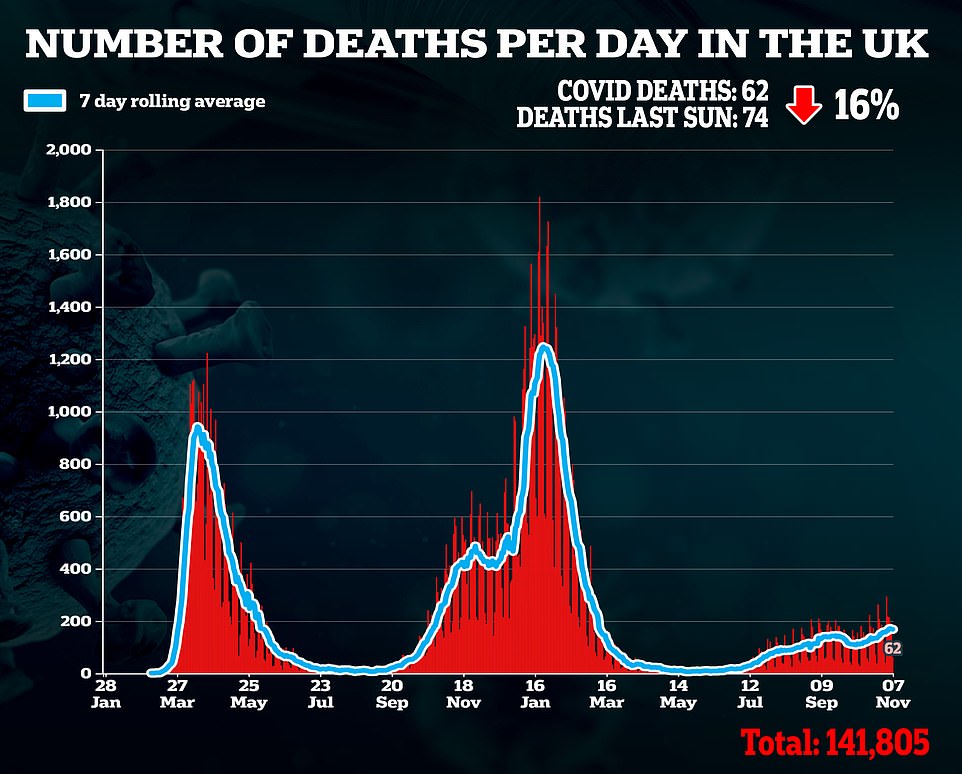 While stating the UK was ‘not out of the woods yet’ when it came to Covid, he added the country was a long way from facing the prospect of another winter lockdown.

He told Sky News: ‘I think we’re a long way away from thinking in those terms.

‘I think that clearly there is a situation that if the NHS is under severe pressure, if the number of deaths sadly starts to increase, then of course, obviously, there may be discussions around whether more restrictions need to come in.’

Leading experts have attributed Britain’s falling Covid cases to a rise in immunity trigged by a combination of the booster vaccine campaign, and the back-to-school wave of infection which triggered the latest wave.

Dr Tildesley added the prospect of a winter lockdown is dependent of how effective the rollout of the Covid vaccine booster programme is, and urged all eligible persons to get their jabs.

‘I would hope that, with a very successful vaccination campaign, the idea of a winter lockdown is a long way away,’ he said.

‘But it is certainly true that if we don’t get good immunity across the population, there may need to be perhaps further measures taken. So it’s really important that we encourage people to come forward when eligible to take those booster jabs.’

Professor Naismith also highlighted the importance of Covid booster jabs, adding he was eagerly awaiting getting his own. ‘I’m certainly looking forward to taking mine the first day I can,’ he said.