Hospitals in England were today told to stop cancelling routine operations because blood supplies are no longer dangerously low.

Trusts brought in emergency rationing plans last month after health officials issued the first ever ‘amber alert’ because stocks had dipped below two days’ worth across the country.

As a result, hospitals were forced to protect dwindling stocks. Hip replacements and similar ops were postponed.

NHS Blood and Transplant today confirmed that supplies have now bounced back to pre-shortage levels. Six days’ worth of supply is currently banked for nearly all blood types.

NHS bosses said the amber alert was a ‘vital measure’ to save blood for patients who needed it the most, such as car crash and stabbing victims. Hospitals have been told to ‘restock slowly’.

However, officials warned there could potentially be more chaos this winter because it’s ‘always a challenging time’ as supply drops due to illness and bad weather.

NHS Blood and Transplant last month imposed an ‘amber alert’ after national blood stocks fell below two days’ worth. As a result, hospitals were forced to restrict the amount of blood they used. But the health service today confirmed that supplies have now bounced back to its target of six days’ supply 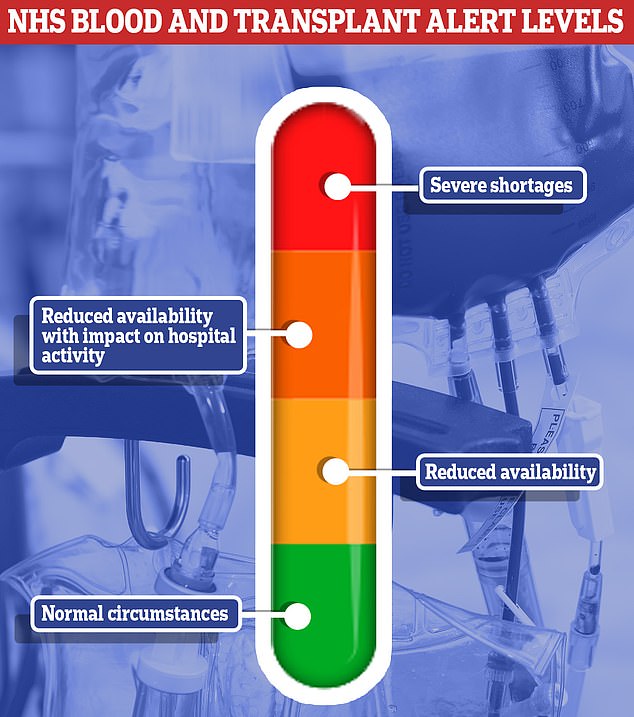 The NHS blood supply ‘amber alert’ was in place from October 12 to November 8. It saw trusts told to implement emergency plans to protect their dwindling stocks 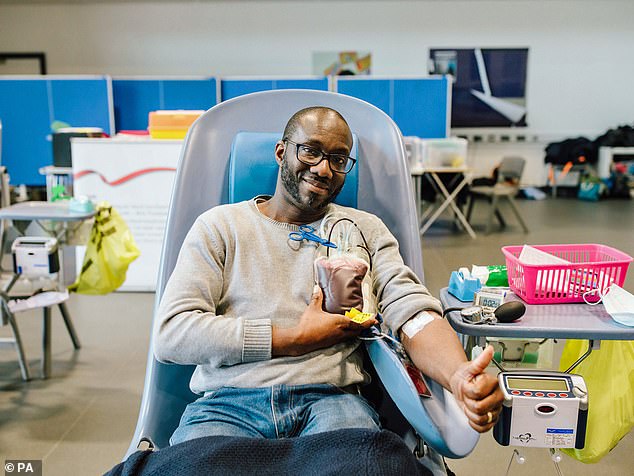 NHS bosses said the amber alert was a ‘vital measure’ to save blood for those who needed it the most while stocks were low but hospitals can now ‘restock slowly’. Pictured: a man donating blood at a session in Croydon, south London

What is the problem with NHS Blood and Transplant staffing and can I help?

Since July 1, NHS Blood and Transplant has recruited more than 250 staff in key frontline roles.

But turnover continues to be a challenge, with a quarter of staff who joining leaving every year.

The shortages have led to appointment cancellations because there are not enough staff to take the blood.

This has been exacerbated by Covid and other illnesses causing last minute absences.

What roles are there?

The greatest challenge is in donor carers.

The role looks after people giving blood and administers the needle.

Do I need a medical background to be a donor carer?

But this has been rapidly fast tracked to around eight weeks to tackle the current stock challenge.

However, volunteers with no training are not currently being asked for.

NHS Blood and Transplant triggered the amber alert on October 12 as there were only two days of O+ and O- blood — the latter being the universal blood type that hospitals are reliant on in emergencies.

It was meant to remain in place until at least November 9 — meaning it has been lifted a day earlier than expected.

While the alert was active, hospitals were told to ‘protect blood stocks’.

This included postponing ‘non-urgent’ hip replacements, which requires blood on standby, for those that don’t, such as hernia repairs, gall-bladder removal and eye surgery.

However, the health service continued to carry out urgent, emergency, cancer and transplant surgery and treated those with long-term conditions.

The health service today said the amber alert could be lifted due to an ‘amazing reaction from donors, good collaboration with hospitals and getting more staff to the frontline’.

Officials insisted the crisis was solely down to staffing shortages, as opposed to a lack of donors.

Putting extra staff on the frontline meant 3,500 more appointments were available per week, compared to before the amber alert was issued.

And 99 per cent of appointments were filled each week, compared to 94 per cent before the alert — meaning an extra 5,200 blood donations took place weekly.

And the restrictions placed on hospitals saw orders for blood drop 20 per cent during the amber alert, allowing supplies to recover, the NHS said.

Officials insisted the crisis was solely down to staffing shortages and rising Covid rates, as opposed to a lack of donors.

Most donor sessions have been full since the crisis was revealed. But some were appointments cancelled at the last minute because of staff shortages.

Overall, blood stocks are now at six days. But A+ stocks are at four-and-a-half days.

Wendy Clark, chief executive at NHS Blood and Transplant, said: ‘The Amber Alert was a vital measure to protect patients who need blood the most while supplies were low.

‘We have worked hard to quickly recover and secure blood stocks and I’m very grateful to our staff, donors and hospitals who have helped to ensure we can lift the alert as soon as possible.

‘We are asking hospitals to restock slowly and to order the right amount of blood they need for patients so we can make best use of our donors’ precious blood.

‘We need to continue to fill appointments so we can supply the blood every patient needs. We’ve seen an amazing response from our O+ and O- donors.

‘We now also need A+ donors to come forward. If you’re a first-time donor please book an appointment at one of our donor centres in the run up to Christmas or in the New Year.

‘Each blood donation can save or improve up to three lives.’

However, the NHS warned that it still faces a big challenge in recruiting permanent front line staff. It has launched a new recruitment campaign to bring in staff as quickly as possible.

Since July, 163 donor carers and supervisors have taken up roles, a further 95 have been recruited and will start shortly, while another 118 posts are being recruited to.

And it warned the winter months are ‘always a challenging time for blood stocks’.

Cold weather can lead to higher rates of seasonal illnesses and extreme weather, such as snow or flooding, can also stop people travelling to donate blood, as well as interfere with venue availability.

This can lead to a rise in short notice cancellations by donors and centres themselves if they have too few staff on the day, making it more challenging to collect enough blood.

Health Minister Neil O’Brien said: ‘I am pleased blood stocks have improved and the amber alert will be removed.’

He said the ‘incredible response shows yet again just how highly valued and respected the NHS is by all those who rely on it’.

But Mr O’Brien warned the nation to ‘not be complacent’.

He said: ‘More blood donation appointments are becoming available and I urge existing donors to continue to book in so we can build our blood stocks for the Christmas and New Year periods.’

Close to 100 per cent of appointments need to be filled to maintain blood supplies. Some 86 per cent are filled next week but the figure drops as low as 38 per cent in the week between Christmas and the New Year.