Week four was the week that launched a thousand GIFs. Brady and Belichick hugging in the Boston rain, Steve Belichick doing goodness knows what, Friday night with Urban Meyer and a coin toss for the ages.

It’s one of the closest seasons in recent memory: just one team is still perfect, 12 are 3-1 and two are waiting for a first win.

Over 28.5million people tuned in to watch Bill Belichick and Tom Brady play chess for three hours in the rain. It was compelling and fascinating and they briefly hugged in public afterwards.

Brady didn’t throw a touchdown – for only the second time since joining Tampa Bay – and completed just 51.2 per cent of passes, but still became the NFL’s all-time passing yards leader. 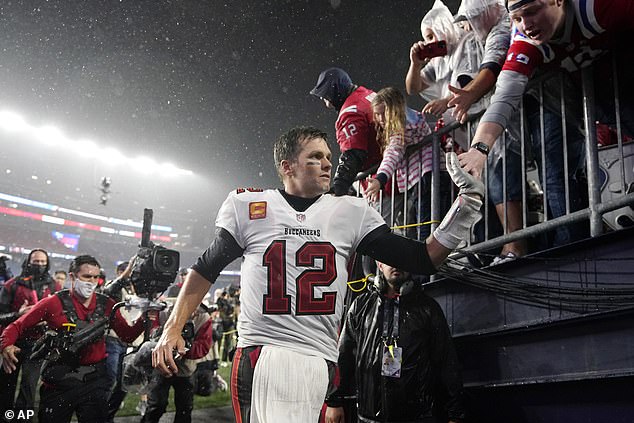 He was befuddled by Belichick but bided his time and ground out a 19-17 victory. The game-changer came when he targeted back-up slot corner Justin Bethel when Jonathan Jones was injured.

Former Buccaneer Nick Folk hit the left upright and missed a go-ahead 56-yard field goal. It’s tough to know what Steve Belichick thought about it all.

THE ONE WHERE JOEY DROPS THE F-BOMB

No Mannings this MNF, but there was a 35-minute rain delay before the LA Chargers stifled Derek Carr and inflicted a first defeat on the Las Vegas Raiders.

‘I’ve never had an indoor stadium with a lightning delay. This is a bizarre night for all of us,’ said Raiders HC Jon Gruden.

Fresh from beating KC last week, Justin Herbert threw for three touchdowns in the 28-14 win, to give the 3-1 Chargers a three-way tie at the top of the AFC West with the Raiders and Chiefs.

Chargers DE Joey Bosa was less than complimentary about the officials after he was called for an unsportsmanlike conduct penalty with 3:59 left in the game for arguing over a missed call.

‘I didn’t even know they called the f****** penalty on me because I was fuming,’ Bosa said, ‘but I mean refs are blind, simple. I’m sorry but you’re blind, like open your eyes and do your job it’s so bad it’s unbelievable.

‘Obviously that’s on me. I should never lose my temper like that but these guys have got to do a better job because it’s been years of terrible missed calls left and right. It’s really pathetic, honestly, but pathetic on me too for doing what I did. Call or not I have to take a step back and just go to the next play, but man they seem not to have their eyes open half the time.’

A statement win for the Arizona Cardinals, who beat the Rams for the first time since 2016 in a 37-20 victory which wasn’t that close.

But this team is different and lead the league in points (140) and total yards (1,762). More importantly, they lead the NFC West. 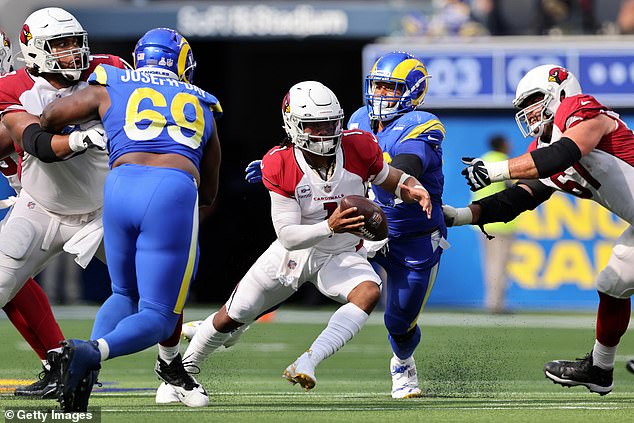 Kyler Murray has completed 76.1 per cent of his passes and has accounted for 12 touchdowns

The Saints were 21-10 up and cruising in the fourth, so little surprise that Giants players were pumped after forcing overtime in the Superdome.

It was the first time a team had overcome an 11-point deficit in the fourth since Chicago beat Carolina 23-22 at Soldier Field in 2012.

Everyone knows the importance of winning the coin toss – enter safety Jabrill Peppers.

So, just what did he say?

His excitement was not misplaced, the Giants winning in the Superdome for the first time since 1993, thanks to Saquon Barkley’s six-yard rushing touchdown.

It was unusual enough that Meyer, 57, didn’t fly back with his team to Florida after Thursday’s 24-21 defeat by the Bengals.

After staying in his home state of Ohio, on Friday the married grandfather went to Urban Meyer’s Pint House – his restaurant in Columbus.

Meyer – whose team are 0-4 and are closing in on becoming just the third team to lose 20 games in succession – called a team meeting on Monday. He, of course, vowed to ‘own it’

‘I just apologised to the team and staff for being a distraction,’ Meyer said. ‘Just stupid and so I explained everything that happened and owned it. Just stupid. Should not have put myself in that kind of position.

‘I stayed to see the grandkids and we all went to the dinner that night,” he said. “There was a big group next to our restaurant and they wanted me to come over and take pictures, and I did. They were trying to pull me out on the dance floor, screwing around, and I should have left.’

Meyer also said he apologised to his family.

A monster day for Patrick Mahomes as Andy Reid beat Philadelphia again (he’s 3-0 against his former team) to become the first head coach to win 100 games with two different franchises.

That’s as many touchdowns as Nick Sirianni has pens inside his visor. 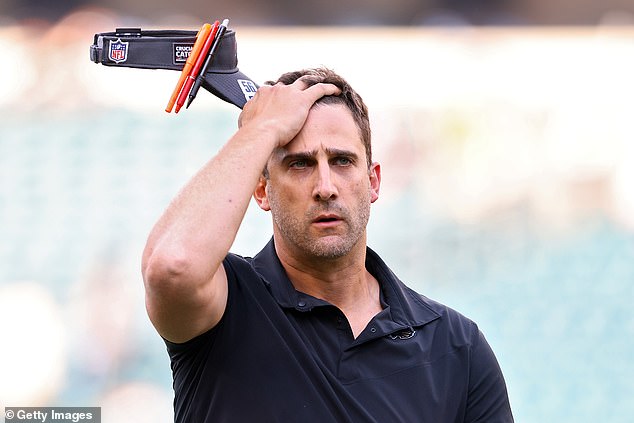 In their four defeats Detroit have gone for it ten times on fourth down, converting three.

‘I was trying to give us an upper hand,’ he said. ‘Well, you know what, I need to look at that. And we’ve got to be a lot better. And we’re going to have to live in that world in practice. That’s going to have to be the main focus for us to continue down that road. Those are the facts, ‘cause we’re not good enough there right now, third and fourth down, 2 to 3 (yards to go).’

This chart shows how it is done, with canny Cleveland topping the list of when to go for it.

And speaking of McVay, it’s all well and good praising him for being 40-0 after being up at half-time, but what about when the Rams are behind? McVay is 6-22.

LET’S HOPE THEY MEET IN THE PLAYOFFS (*language warning*)

Broncos RB Javonte Williams may or may not have started it with this run.

Either way, the Ravens were on something of a tear, rushing for over 100 yards in 42 consecutive games (Pittsburgh held the record with 43 from 1973-77).

With their makeshift running back stable of Latavius Murray, Devonta Freeman, and Le’Veon Bell perched on 97 yards, the Ravens had the chance to level the record with the final play of the game.

It did not go down well with Vic Fangio.

Broncos HC Vic Fangio thought the Ravens’ run at the end of the game was “kind of bull****” and notes he’s never seen anything like that in his 37 years of coaching in the NFL. pic.twitter.com/TltszwLKmW

That Pittsburgh game is a blip in the rear-view mirror. Buffalo are 118-23 against their last three opponents. Next up: a trip to Arrowhead…

That Buffalo game is a blip in the rear-view mirror. Pittsburgh are 44-77 against their last three opponents. Next up: Denver come to town.

But despite Ben Roethlisberger’s struggles, it is nice to see Mike Tomlin smile once in a while.

Aaron Rodgers looking at Mike Tomlin how a woman looks at a dude in the club when she got a man but knows it’s gonna be over soon.. ?? 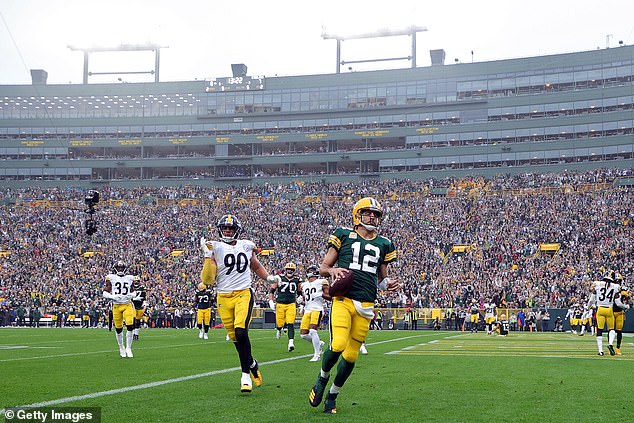 The Seahawks resurrected their NFC West chances by beating San Francisco. The 49ers wait on Jimmy Garoppolo, who suffered a calf injury during the defeat. The reins do not pass to Trey Lance, with Kyle Shanahan saying Garoppolo has a chance to face Arizona.

More tumult in Miami as the offense sputtered and the defense allowed another 100-yard rusher. That would be Jonathan Taylor, who took the ball out of Carson Wentz’s hands, helping the Colts to a first win.

Kevin Stefanski got one over Mike Zimmer as the Browns won in Minnesota, but Baker Mayfield had little to do with it. Minnesota spent big on rebuilding their (run) defense in free agency, but the Browns pounded for 184 yards on the ground.

And things are rosy in Dallas. Two more interceptions for Trevon Diggs during the 36-28 win over Carolina.

Asked if he’s the NFL’s best cornerback, Dak Prescott said: ‘For sure. Turn on the tape. Watch what he’s doing. Watch the guys that he’s following, week in and week out, the best player. Yes, it’s easy to see.’

It’s going to be a long old week for Atlanta. It’s a crying shame that it’s taken a decade for a team to work out how to use Cordarrelle Patterson, but his three-touchdown career day was in vain.

That was largely due to another former Viking, Taylor Heinicke, who showed Washington’s defense a thing or two about resilience. His improvisation, elusiveness, ability to keep plays alive and sheer guts were on show as he threw the game-winning pass to Terry McLaurin.

‘Throughout the years, high school and college, there’s been some bizarre plays so, you know, things like that happen. It’s a lot of fun, it’s really cool, but I feel like I’ve kind of been doing that, those type of plays throughout my life and I think that’s kind of the player I am. Again, I grew up watching Brett Favre, so I saw a lot of crazy stuff from him, so it’s a good part of my game.’ 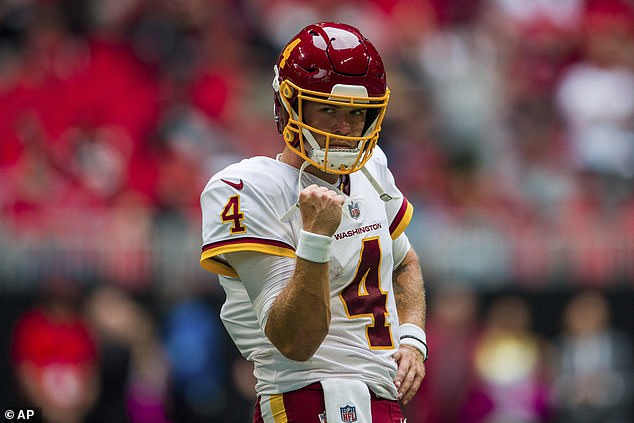 The Falcons are due to arrive on Friday ahead of Sunday’s game with the New York Jets.

The Jets won in overtime, by the way. Zach Wilson showed great powers of improvisation – and took his tally to eight interceptions for the season – to give Robert Saleh a first win as head coach.