Next is set to rake in record profits after a bumper Christmas triggered a fifth upgrade to its forecasts in ten months.

Following booming demand for party dresses and suits over the festive period, the FTSE 100 clothing chain said it now expects to make profits of £822million in the 12 months to late January.

That would be 9.8 per cent above pre-pandemic levels and more than 20 per cent higher than the £670million it pencilled at the start of the year.

Merry Xmas: Clothing chain Next said it expects to make profits of £822m in the 12 months to late January following booming demand for party dresses and suits over the festive period

It came after Next enjoyed a stonking Christmas with sales in the eight weeks to December 25 up 20 per cent on the same period in 2019 before Covid struck.

The business was boosted by sales of partywear, as shoppers hoping for a more sociable festive season decided to refresh their wardrobes.

Sales over the period were £70million higher than it had predicted just a few months ago. The High Street stalwart also pencilled in profits of £860million for the year ahead – up 4.6 per cent.

Analysts branded Next the ‘jewel in the High Street’s crown’.

All eyes will now be on its rival Marks & Spencer, which will unveil its trading update next week after launching a shake-up of its clothing department.

Despite the dazzling performance, Next warned of problems in its delivery service due to a lack of staff. And it voiced concerns over inflation as the cost of materials, staff and freight soar.

Why Lord Wolfson is retail royalty 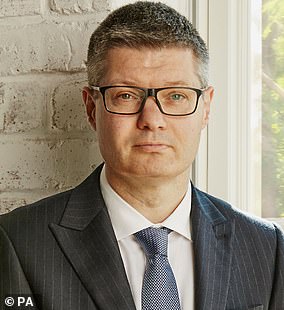 So what is the secret of Next’s success? The secret, paradoxically, is that there is no secret.

Next is brilliant because it does the basics of retail really, really well. Lord Wolfson, its boss, sells products people want, at a price they are happy to pay.

All the nitty gritty, from stock control to managing returns, is watched like a hawk.

It sounds simple, but it is easier to say than to do – just ask Next’s rivals who get it wrong.

Other ingredients in the recipe include early investment in digital, which began back in 1999 and proved its worth during the Covid lockdowns.

But the physical stores remain an integral part of the mix, so customers can pop in to try things on, pick up garments bought online and bring back unwanted items.

Next offers a platform for other brands and takes stakes in them, for instance in Reiss, where it has a 25 per cent holding.

Wolfson’s straightforward approach even extends to its financial reports. At most companies, these are splattered with corporate gobbledegook.

Next’s are a model of plain English – always a sign of a firm at ease with its business model and nothing to hide. This is why Wolfson is retail royalty.

It said wages alone were expected to rise 5.4 per cent over the next year, driven by an increase in the national living wage and shortages of warehouse and technology staff.

It said prices of its goods would probably be 3.7 per cent higher in spring and summer than a year earlier, rising to 6 per cent next autumn and winter.

Next chief executive Lord Wolfson said: ‘The key level of uncertainty is the inflationary environment.

I have been in business for 30 years and I don’t think I have ever been through another period of economy-wide inflation on this scale.’

He added: ‘How well we fare in that environment is difficult to see.’ Investors seemed to take the warning to heart, as shares fell by 3.4 per cent, or 268p, to 7770p despite the upbeat results.

Even the promise of a 160p-per-share special dividend, adding up to a total of £205million, did little to buoy sentiment.

Next is one of the few retailers with a bricks-and-mortar presence on the High Street which has performed well during the pandemic.

Part of this is due to online innovation allowing customers to still shop when stores were forced to close.

Next has also partnered with third-party brands, such as Victoria’s Secret, Gap and Reiss, to sell their clothes on its platform.

Sophie Lund-Yates, equity analyst at Hargreaves Lansdown, described Next as the ‘jewel in the High Street’s crown’. She said: ‘There aren’t many bricks-and-mortar retailers dishing out special dividends or upgrading guidance multiple times over.’