A newspaper columnist who has worked for the BBC has been revealed as one of the activists behind the Extinction Rebellion blockade of a printworks on Friday.

The blockade prevented the distribution of several national newspapers, leaving hundreds of Britons without their papers on Saturday morning.

Now, Donnachadh McCarthy, a columnist for the Independent, has been revealed as of one of around 100 XR activists who took part in the protest at a printing plant in Broxbourne, Hertfordshire.

As well as regularly writing for a national newspaper, McCarthy also frequently appears on radio and television, including the BBC’s It’s Not Easy Being Green and ITV’s How Green is Your House?.

At 9,30am on Saturday he tweeted a photograph of the blockade at Broxbourne, saying: ‘Dawn at #ExtinctionRebellion blockade of Murdoch’s print works. 9 hours & loads of rebels still locked on. Murdoch + media billionaires must Tell the Truth on climate & ecology crises.’

McCarthy, who works as an environmental auditor for businesses and is the author of The Prostitute State – How Britain’s Democracy Was Bought, has also written for The Sunday Times, The Guardian and Esquire magazine.

Donnachadh McCarthy, a columnist for the Independent, has been revealed as of one of around 100 XR activists who took part in the protest

Last week, he appeared at an XR protest near the Houses of Parliament, where he addressed a group of activists.

He has also taken part in several shutdowns of streets in central London.

In his role as an environmental editor, through his London-based 3 Acorns Eco-audits consultancy, McCarthy advises businesses and organisations on how to improve their environmental practices.

Gully Bujak, a committed Extinction Rebellion activist who works as an actress and model, also took part in the blockade.

Speaking outside the printing plant on Friday night, she said: ‘The climate emergency is an existential threat to humanity. Instead of publishing this on the front page every day as it deserves, much of our media ignores the issue and some actively sow the seeds of climate denial.’

The 27-year-old’s previous battle honours include being arrested at a protest last April after sitting in a pink boat blocking the middle of Oxford Circus. On that occasion she said the police were ‘polite and considerate’ but that, she mused, was only because of her ‘position of privilege as a white middle-class woman’.

Jonathan Fuller, an ex-civil servant with HMRC and Transport London, also took part in the blockade. 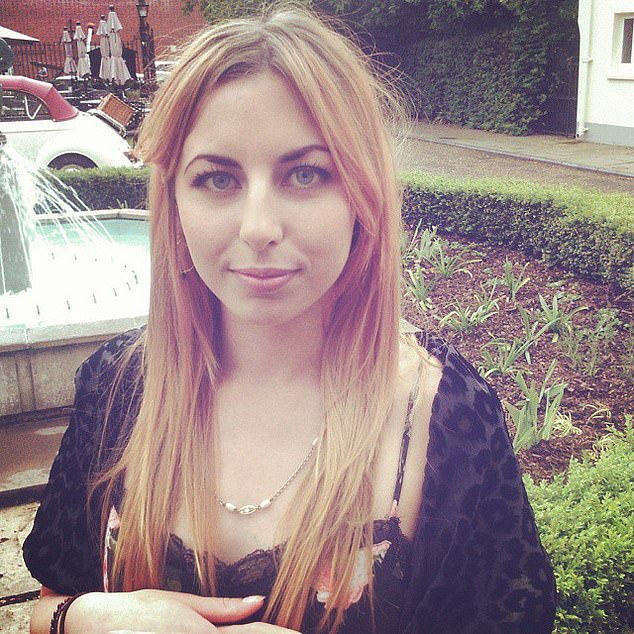 Gully Bujak, a committed Extinction Rebellion activist who works as an actress and model, also took part in the blockade 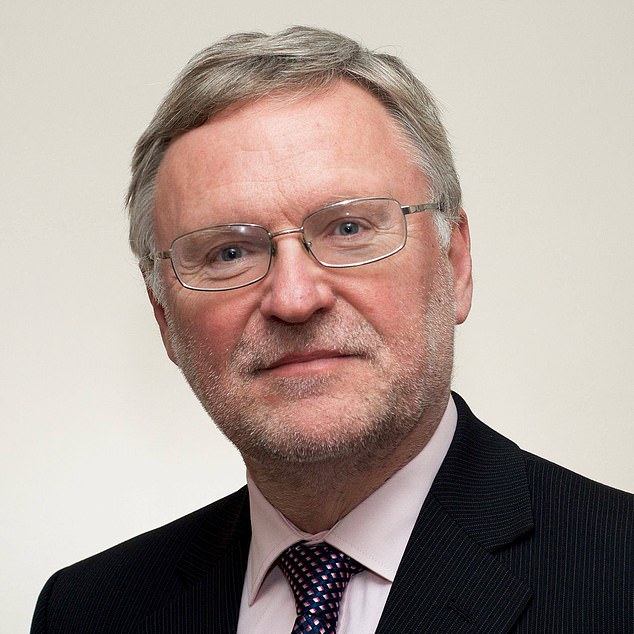 Jonathan Fuller, an ex-civil servant with HMRC and Transport London, also took part in the blockade 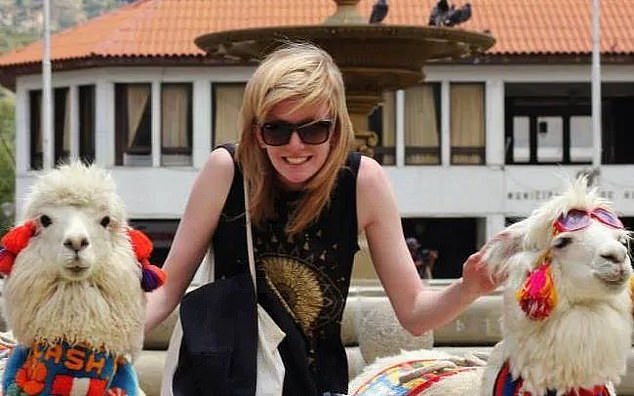 Mr Fuller, 62 and now a full-time environmental activist, previously hit the headlines after his arrest during the blockade of Oxford Circus in April last year when viral.

The clip saw him praise  police for the kindness, concern and professionalism shown to him while under arrest and in custody.

The 62-year-old has previously campaigned against the expansion of Southend Airport and proposals for an airport in the Thames Estuary.

He said on Saturday: ‘There is a lot that the broadcast media and print media are not reporting on – particularly the right-wing press – which is why we are here today.

‘In September 2018 the UN Secretary General declared that climate change is an existential threat, but it wasn’t widely reported. The same thing happened in February 2020 when the [US National Oceanic and Atmospheric Administration] forecasted that the first summer free of ice would be 2024.

‘The cruelty of this is particularly for the young. The media is denying them the information to protect themselves, to prevent what could eventually kill them.’

He said: ‘I’m not naturally a willing rebel. But a lot of this is about Murdoch and the press. This information is out there but it’s just not getting the coverage.

‘Murdoch has destroyed personal debates on a lot of things, including climate change and Brexit, and it’s just become a slagging match.’

She said: ‘If we are to sort out this mess we’re in, the mainstream media must stop profiting from clickbait culture that is swimming in misinformation, that makes us hate our neighbours, suspect foreigners and vulnerable groups, and rally the nation into action.’

Byrne is an English Literature and history of art graduate from Roehampton University.

She previously worked as a project manager and communications coordinator for the charity Action for Stammering Children.

She also worked for a year at a production company in Los Angeles before joining Project Cordillera, a firm organising sustainable adventure holidays in South America. 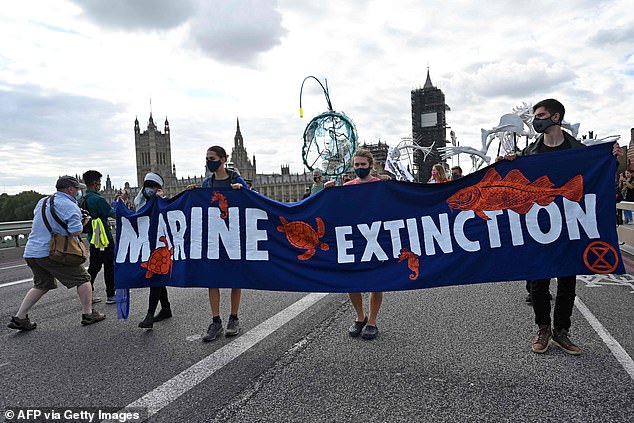 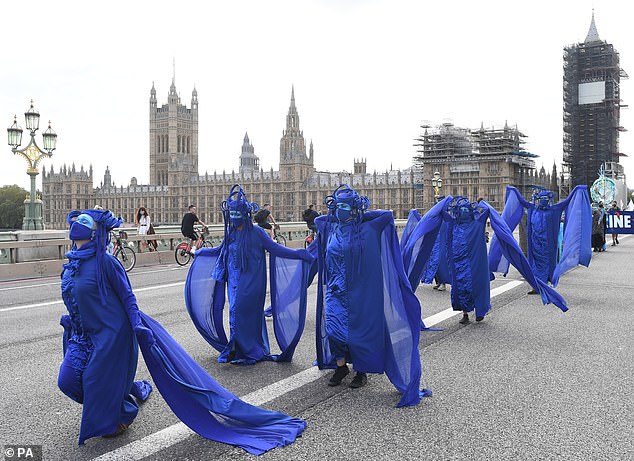 Protesters cross Westminster Bridge during a marine extinction march, part of protests in central London this weekend. Extinction Rebellion continues with its plans to hold 10 days of demonstrations across central London as part of its ongoing campaign on climate change 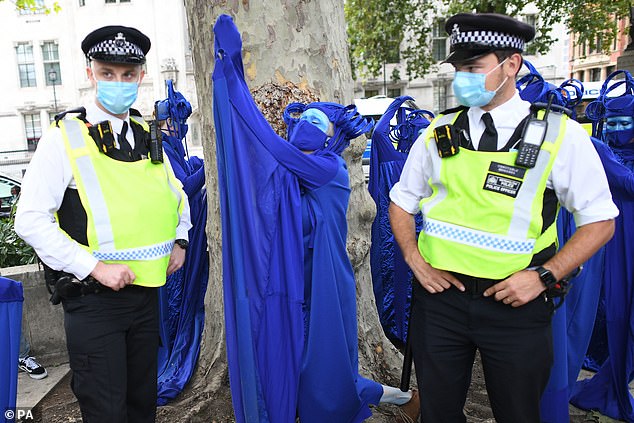 The Extinction Rebellion protesters marched across the bridge and through Westminster 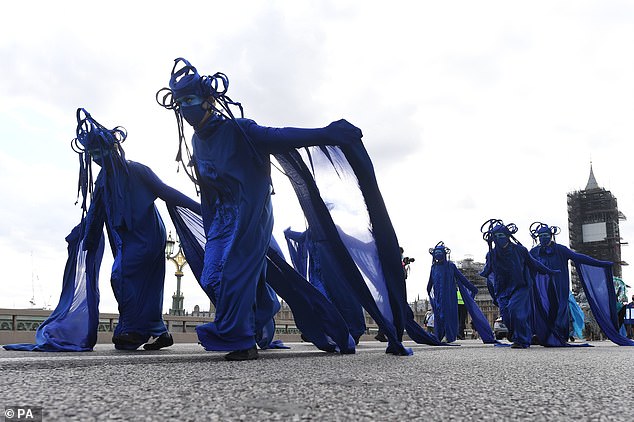 The Marine Extinction March saw campaigners carry dead sea life props, flags and banners, to highlight what XR said was the destruction of the world’s oceans in their latest demonstration 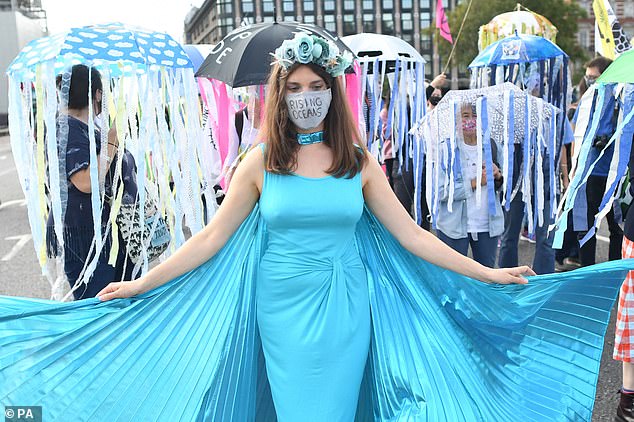 It comes as Extinction Rebellion protesters staged their latest demonstration on Westminster Bridge in London this afternoon.

Protesters dressed in blue garments crossed the bridge during a marine extinction march, part of an Extinction Rebellion protest in central London.

The environmental activists continue with plans to hold 10 days of demonstrations across central London as part of its ongoing campaign to highlight climate change.

The Marine Extinction March saw campaigners carry dead sea life props, flags and banners, to highlight what XR said was the destruction of the world’s oceans.

The procession was led by a group of dancers wearing blue gowns to represent the sea, and a man dressed only in swimwear, a yellow hat and trainers.

Earlier on Sunday, about 100 demonstrators met at Gabriel’s Wharf to raise awareness about the impact of climate change and how it could lead to more extreme weather and flooding.

Jan O’Malley, 74, from Clapham in south-west London, joined the march at Parliament Square.

She said: ‘I’m taking part because I have grandchildren, and they will soon have their own children, and I’m really worried about the impact on our future generations.

‘The Government has declared a climate emergency, but they are not taking enough action fast enough.’