New Zealand Prime Minister Jacinda Ardern is on track to win Saturday’s general election in a landslide after the country eliminated coronavirus.

The centre-right National Party has only 25 per cent of the vote, a disastrous result for the main opposition party which would be its second-worst tally in its 84-year history.

Voters have rewarded Ms Ardern, 40, for her successful handling of Covid-19 after the country stopped it spreading with a short, harsh lockdown and border closures, allowing most of normal life to resume with only 1,883 cases and 25 deaths recorded.

Labour will likely not need help to form a government but may anyway form an agreement with the Green Party – which is set to win about eight per cent of the vote and gain seats – in order to secure a left-wing ‘super-majority’. 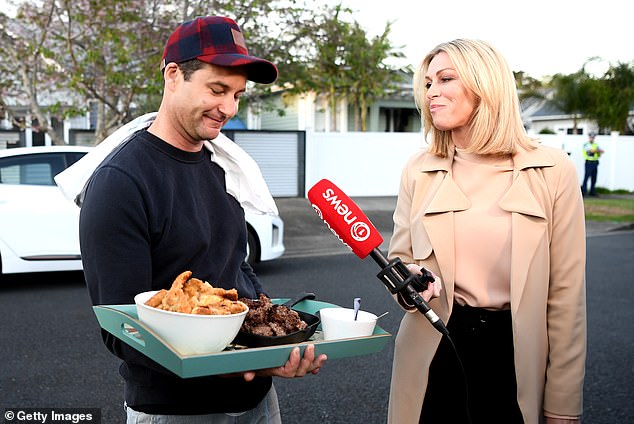 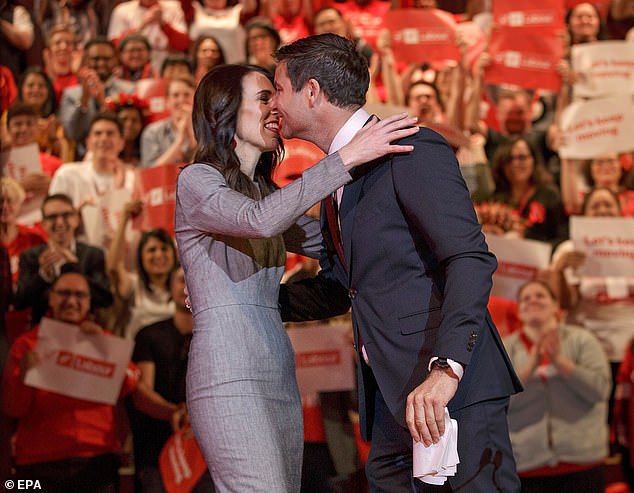 The Greens and Labour are currently in a three-way alliance with nationalist party New Zealand First, which is on track to take only two per cent of votes and lose all its seats, putting leader and foreign minister Winston Peters out of parliament for the first time in 35 years.

Libertarian party ACT is due to win about seven per cent of votes and add nine seats to its current seat to become the fourth biggest party and junior opposition party.

Faced with Ms Ardern’s popularity and her widely praised handling of the Covid-19 pandemic, National Party Deputy Leader Gerry Brownlee said: ‘We always knew it was going to be tough.’

New Zealand has a mixed-member proportional system where parliament is made up of directly elected constituency MPs and also list MPs, the number of which is determined by party vote share. 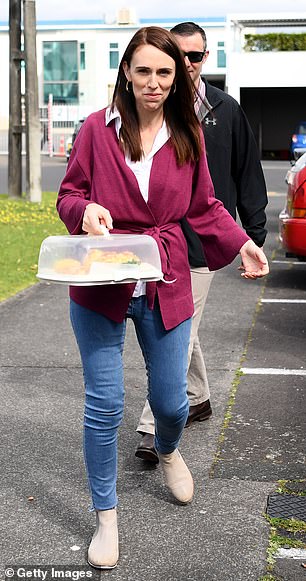 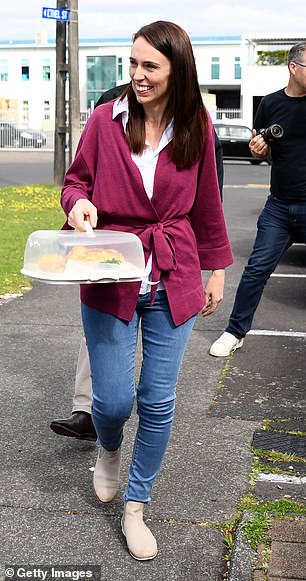 The general election was delayed by a month due to coronavirus. Pictured: Ms Ardern on Saturday 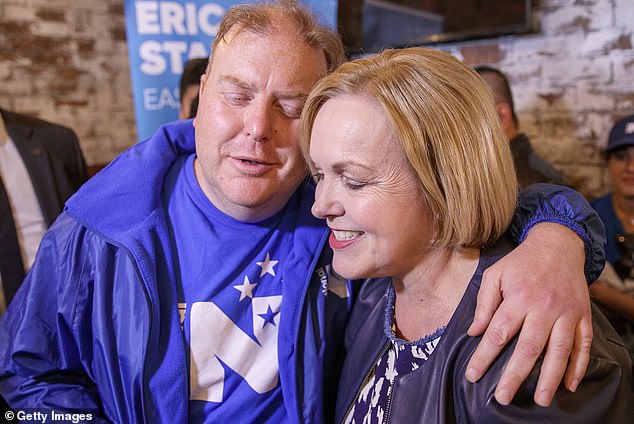 Polls on Friday gave Ms Ardern a double-digit lead over National, led by former lawyer Judith Collins, who is nicknamed ‘the Crusher’ over her 2009 plan to crush boy racers’ cars.

Ms Ardern’s re-election was far from assured before the pandemic, amid criticism that her government has failed to transform the country despite an ambitious domestic policy.

But she has won international praise for her handling of a series of crises during her tenure, including the Christchurch terror attack in March 2019 and the White Island volcano eruption in December.

With a majority, Labor would be the first party to govern alone since New Zealand switched to a form of proportional representation in 1996. 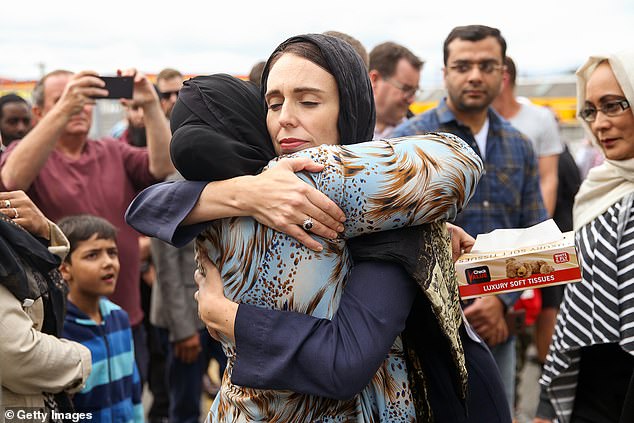 Prime Minister Jacinda Ardern at the Kilbirnie Mosque on March 17, 2019 after the Christchurch terror attack 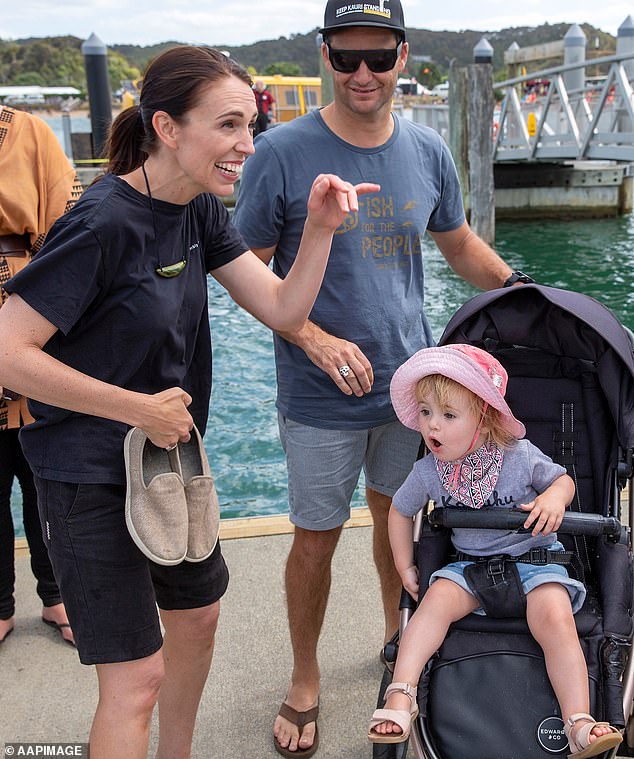 Ms Ardern has promised tax hikes on Kiwis earning over $180,000 to fund policies including free apprenticeships to help the economy recover after Covid-19.

The prime minister on Friday urged voters to deliver her a strong mandate, promising a swift recovery from the pandemic.

New Zealand is at the lowest level of restrictions with no limits on gatherings and social distancing merely a suggestion, allowing fans to return to sports grounds.

The election was postponed by a month after a new outbreak surfaced in Auckland, but this has since been quelled with no active cases in the community.

‘If you want pace and speed, give us a strong mandate,’ Ardern said in an interview on Radio New Zealand.

Immigration: Allow a broader range of people to get visas and re-start the refugee intake program

Debt: Reduce the government debt to GDP ratio to below 30 per cent by 2030 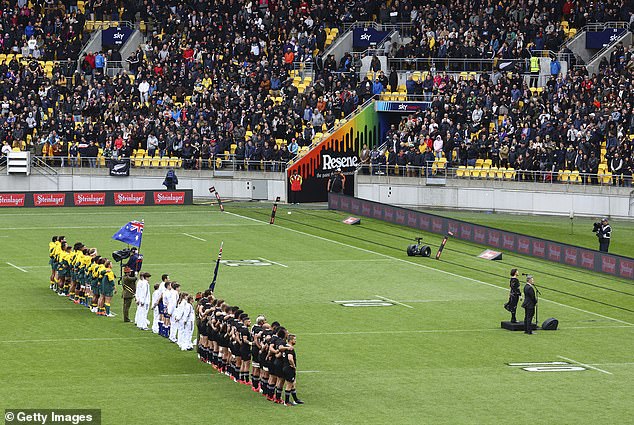 Normal life: Fans pack into a stadium in Wellington last weekend to watch the All Blacks play Australia, after New Zealand scrapped most restrictions relating to coronavirus

How do New Zealand elections work?

New Zealand has a single-house legislature with 120 members.

The system has been mixed-member proportional (MMP) since 1996.

This means the parliament is made up of directly elected constituency MPs and also list MPs nominated by their party.

Each voter casts two votes – one for their local MP and another to nominate their preferred party.

A party is entitled to a number of seats based on its share of the total vote.

If a party’s share entitles it to ten seats and its candidates win seven constituencies, it will be awarded three list seats, bringing it up to its required number.

A party that fails to win any constituencies must win five per cent of the vote to qualify for list seats.

In the 2017 parliament, 71 seats were filled by electorate MPs, with the remaining 49 from ranked party lists.

Defending her record on domestic issues, Ms Ardern said: ‘If we genuinely want to make sure what we are doing on child poverty and on climate change isn’t just a three-year burst, I have to make sure it’s sustained.

‘It took decades to create, I need more than three years to fix it.’

National Party leader Ms Collins has tried to exploit fears of a left-wing government raising taxes and being hostile to business.

Ms Collins, 61, argued that she is best placed tackle the post-pandemic financial challenges.

While life is back to normal in New Zealand, its borders are still shut, its tourism sector is bleeding, and economists are predicting a lasting recession.

The economy shrank 12.2 per cent in the second quarter to its worst level since the Great Depression.

Ms Ardern has pledged to increase taxes for top earners, while Ms Collins has promised short-term tax cuts, but they have otherwise shown few major differences on policy.

‘The relative lack of policy differences mean that much of the debate has been about competence – which party and which leader can be trusted to ‘get the job done’,’ said Geoffrey Miller, analyst at political website Democracy Project.

Business confidence, which hit historic lows in the early months of Ms Ardern’s government, has improved after her successes.

Still, there has been criticism of Ms Ardern’s economic policies and a looming summer season with no international tourists will be a major test.

‘She won’t be able to ride this wave of personal popularity forever,’ said Miller. ‘New Zealand has done well with management of Covid-19 but chapter two of the story starts from Sunday.’

About 1.7million of the 3.5million registered voters cast early ballots.

New Zealanders also voted on whether to legalise recreational cannabis and euthanasia in two referendums on Saturday.

A vote in favour of legal marijuana would make New Zealand only the third country in the world to legalise the drug so after Uruguay and Canada.

The euthanasia measure, which would also allow assisted suicide, would apply to people who have terminal illnesses, are likely to die within six months, and are enduring ‘unbearable’ suffering. 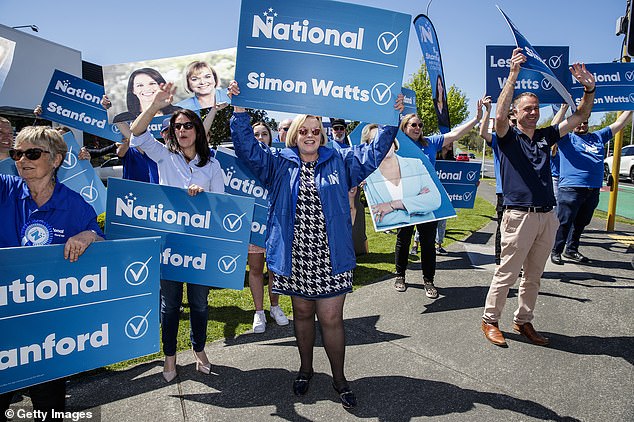 Countries that allow some form of euthanasia include the Netherlands, Luxembourg, Canada, Belgium and Colombia.

Lara Greaves, a lecturer in New Zealand politics at the University of Auckland, said she thinks the marijuana referendum is destined to fail.

‘I think the problem is that we would be going from criminalisation, and a bit of medicinal use, to full-on recreational use,’ she said.

‘Probably what needed to happen to get the public on board was to have a phase of decriminalisation.’

She said a large turnout of younger voters would be necessary for the measure to have any hope of passing but that was far from certain.

Ms Ardern has declined to say how she intends to vote, saying she wants to leave it for people to decide. 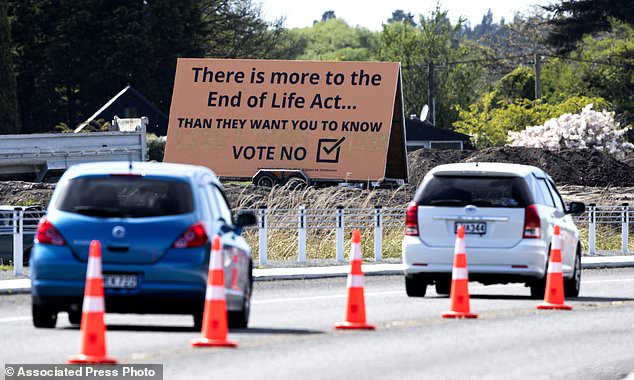 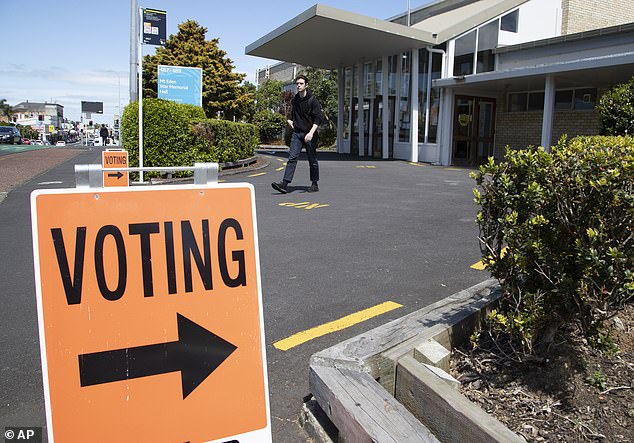 A man leaves a polling station in Auckland, New Zealand after voting in the general election

The prime minister did admit during the campaign to smoking marijuana when she was younger.

One vocal proponent of the marijuana referendum has been former Prime Minister Helen Clark.

A position paper from her foundation argues that indigenous Maori have faced disproportionate and excessive punishment from the legal system when caught with the drug.

‘Cannabis use is a reality in New Zealand, and the results of our current policy approach damage our health, worsen social equity, and drive crime,’ Clark’s foundation said.

Arguing against the referendum is a number of community and religious groups who have formed the ‘Say Nope to Dope’ campaign.

They say today’s marijuana is strong, addictive and harmful, and that keeping it illegal deters people from using it.

The results from both referendums will be announced on October 30.

From giving birth to a terror attack: Jacinda Ardern’s time in power 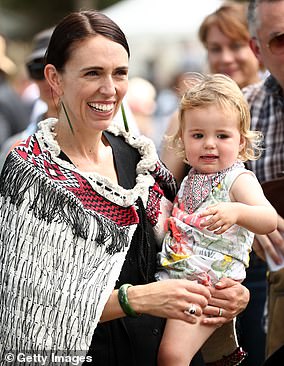 Jacinda Ardern, 40, won the top job after the 2017 election when Labour formed an alliance with two other parties – New Zealand First and the Greens. The following year, she became only the second world leader to give birth while in office.

She became a role model for working mothers around the world, many of whom saw her as a counterpoint to President Donald Trump. And she was praised for her handling of last year’s attack on two Christchurch mosques, when a white supremacist gunned down 51 Muslim worshippers.

Ms Ardern came to power with an ambitious domestic agenda but was unable to introduce flagship policies such as a capital gains tax.

In late March this year, when only about 100 people had tested positive for COVID-19, Ms Ardern and her health officials put New Zealand into a strict lockdown with a motto of ‘Go hard and go early.’

She shut the borders and outlined an ambitious goal of eliminating the virus entirely rather than just trying to control its spread.

With New Zealand having the advantage of being an isolated island nation, the strategy worked. New Zealand eliminated community transmission for 102 days before a new cluster was discovered in August in Auckland.

Ms Ardern swiftly imposed a second lockdown in Auckland and the new outbreak faded away. The only new cases found recently have been among returning travelers, who are in quarantine.

The Auckland outbreak also prompted Ardern to postpone the election by a month and helped increase the early voter turnout.