Ithaca College in New York has been slammed for segregating white staff from minority colleagues during an ‘anti-racism’ course where they will attempt to ‘dismantle white supremacy.’

The college will separate staff according to ‘racial affinity groups’ during the 2022-23 school year and have them meet on different days.

The meetings will be geared towards helping attendees ‘learn about recognizing, responding to, and redressing racial inequities in the first semester.’

In the second semester, the groups will be multiracial, according to the event’s website. 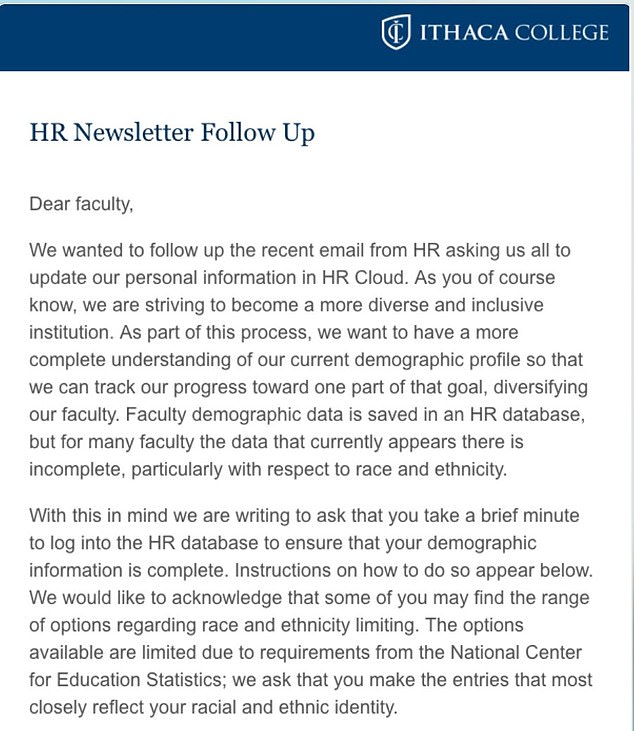 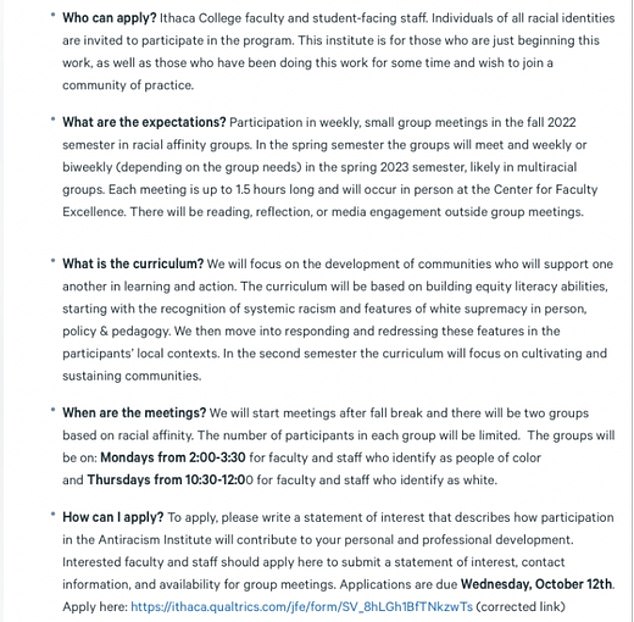 They then introduced the Antiracism Institute, which will divide attendees based on race and have them meet in groups on separate days

Many on social media were stunned by the event and called it backwards and antithetical to defeating racism.

‘Dr. Martin Luther King, Jr is turning in his grave,’ said one user, while another lamented ‘Well, I guess we’ve returned to the 1950’s.’

Another tweeted: ‘We are going backwards here in the battle against racism.’

To separate faculty members, the school recently requested all staff to record their race in an official school database.

In a letter sent to staff, the school said that in order to be ‘a more diverse and inclusive institution,’ they ‘want to have a more complete understanding of our current demographic profiles.’

The letter also said the current data the school has on employees is ‘incomplete, particularly with respect to race and ethnicity.’

The school then asked staff to ‘make the entries the most closely reflect your racial and ethnic identity.’

According to the Antiracism Institute website, which is locked to the public aside from those associated with the school, outlines ‘the long-term vision’ of the program.

They claim it was created ‘to prepare communities to dismantle racist systems and white supremacy culture embedded in policy, pedagogy, and person at Ithaca College.’

The Antiracism Institute was implemented by the college’s Center for Faculty Excellence, which seeks to ‘serve the college community through a commitment to holistic, integrated teaching and learning at every level of community life.’

Ithaca College’s plan is just the latest in a series of woke moves by American universities.

Tufts University was recently slammed after launching diversity events that are also set to separate black and ethnic minority staff from their white colleagues.

Despite aiming to understand a ‘cross-cultural dialogue,’ the Massachusetts university split up the two sessions – set to start on October 17 –  based on the race of attendees. 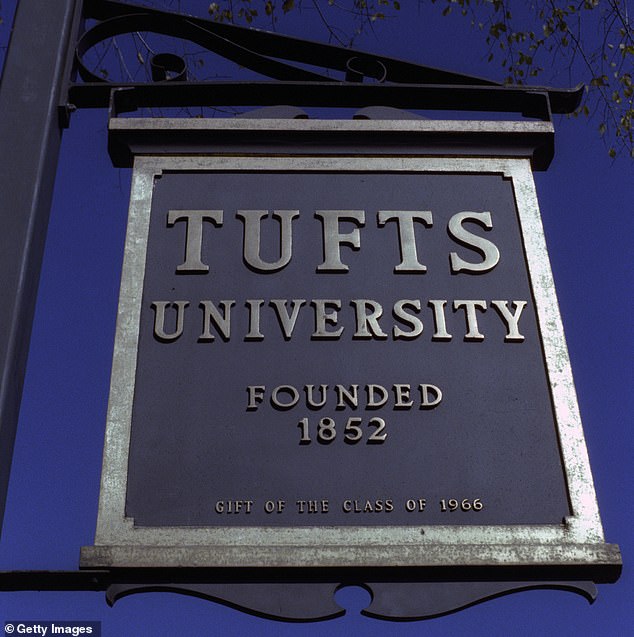 One part of the series, named Radical Healing, is meant to ‘create an important, safe space for staff and faculty at Tufts whose racial demographics are categorized as ‘BIPOC.”

It’s a place where black, Indigenous and people of color can come together to discuss how marginalized and oppressed people should live ‘free of discrimination, racism, and oppression.’

The decision to split the sessions’ participants by race has caused outrage from the school community and beyond.

One furious person wrote online: ‘This bull***t has got to stop, we simply have to stop tolerating this nonsense. Every single organization that tries this needs to be sued immediately.’

Another person, who says that they are a former student at Tufts, added: ‘As a once proud alumnus of Tufts, I am speechless that they are promoting SEGREGATION and RACE SHAMING.’