Gov Andrew Cuomo shared an outline on Sunday that details how businesses could possibly reopen in New York as the state sees 367 deaths in a day, the lowest single-day toll since March 31.

‘The descent continues,’ Cuomo said during his press conference. ‘We are now back to where we were on March 31.’

Cuomo said that 1,087 more people had been hospitalized for the virus the previous day. ‘That would normally be terrible news,’ he said of the hospitalizations. ‘It’s only not terrible news compared to where we were.’

He said that he agrees with the guidelines from the Centers for Disease Control and Prevention (CDC) that suggest the hospitalization rate must be in decline for 14 days before considering reopening.

The governor announced that the reopening process would then consist of two phases. Phase one will focus on ‘low-risk’ construction and manufacturing companies getting back to work.

Phase two will focus on more essential businesses that are also considered low risk. These businesses will be required to give the governor’s office ideas about what precautions they are going to take in the workplace.

Gov Andrew Cuomo shared an outline on Sunday that details how businesses could possibly reopen in New York as the state sees 367 deaths in a day, the lowest single-day toll since March 31 (depicted, right) 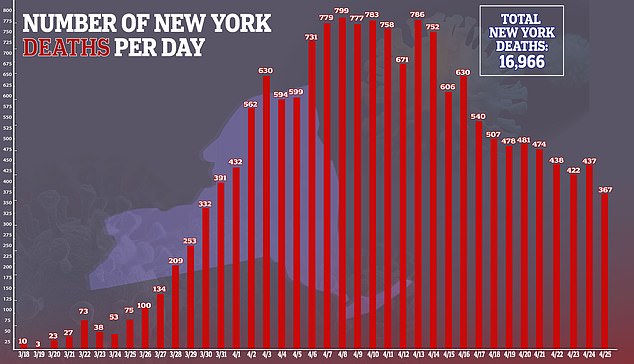 Cuomo said that 1,087 more people had been hospitalized for the virus the previous day. There were 367 deaths for April 25

‘They have to give us a plan before they can reopen,’ Cuomo said. ‘We need them to be creative and think outside the box.’

Officials will be monitoring the number of hospitalizations, antibody tests and positive diagnostic tests between both phases.

Cuomo warned that there will need to be two weeks between the phases so ‘we can monitor what we just did’ otherwise ‘we could lose’ all of the work done ‘if we’re not careful’.

‘There’s no return to yesterday in life. It’s about moving forward,’ Cuomo said.

During the press conference, the governor acknowledged that the situation would be different for downstate New York and that it’s more likely that upstate New York will be the first to reopen.

New York City Mayor Bill de Blasio said Sunday that he hopes to have a roadmap by June 1 on how to rebuild the city after the coronavirus threat subsides.

The mayor said at a news conference that city leaders he’s invited to help plan the city’s recovery should give him the roadmap by then. He said a full rebuild will take about 20 months.

He also said the latest statistics on people being treated for COVID-19 continued to be stable or decline.

The number of people in the city’s hospital intensive care units had dropped from 785 to 768.

De Blasio said the city can’t begin reopening until decreases continue for 10 to 14 days. He said such a fall would signal it was time for the first steps in opening up.

‘The health indicators have to give us the all clear,’ de Blasio said. ‘We restart when we have evidence. There´s no on-off switch here. It’s a series of careful, smart moves.’ 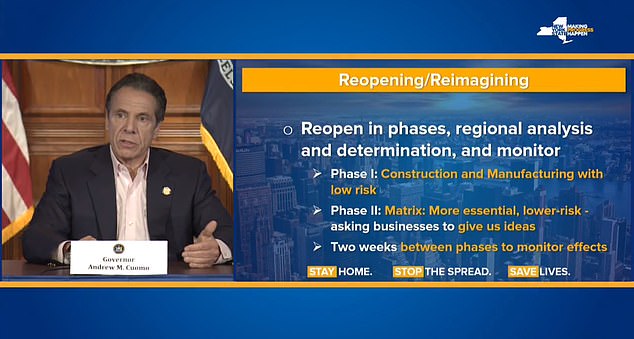 Cuomo announced that the reopening process will consist of two phases: Phase one will focus on ‘low-risk’ construction and manufacturing companies getting back to work. Phase two will focus on more essential businesses that are also low-risk 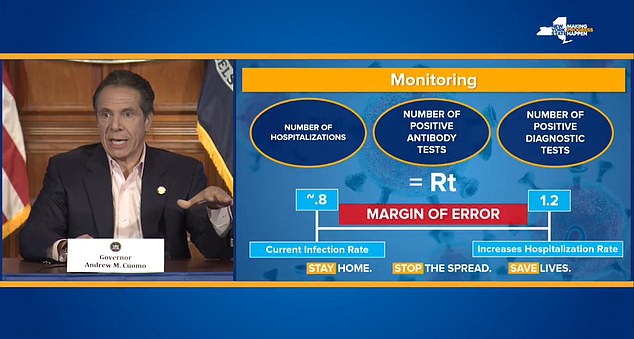 Officials will be monitoring the number of hospitalizations, antibody tests and positive diagnostic tests between both phases

Cuomo said Saturday that New York has started to test health care workers for coronavirus antibodies and will do the same next week with transit and law enforcement workers as the state eases away from the worst days of the pandemic.

Doctors, nurses and other employees at four New York City hospitals that have handled high volumes of coronavirus patients will be the first tested under the new program, Cuomo said.

Rate of Transmission in New York for COVID-19

The COVID-19 rate of transmission (Rt) in New York state is now about 0.8.

That means 10 positive people infect about 8 others.

New York state must keep the Rt below 1 in order to keep slowing the spread.

If that number climbs higher than 1, the state will be right back where it started and likely see an increase in cases and deaths.

Antibody testing is a way of determining if a person has been infected by the coronavirus even if they hadn’t shown symptoms.

After weeks of reserving conventional coronavirus testing to people with symptoms to conserve supplies, the state is expanding eligibility to include first responders, health care workers and a long list of essential employees, such as bus drivers, dry cleaners, undertakers and grocery store workers.

‘Why? Because these people have been carrying the load and they have been subjected to the public all during this crisis, and because they’re public facing,’ Cuomo said. ‘These are the people you interact with.’

Cuomo said he is signing an executive order to allow pharmacies to serve as collection points for testing samples.

If accurate, that means that as many as 1.7 million people have been infected in the city – and that the mortality rate is between 0.6 and 0.8 per cent, far greater than the 0.1 per cent mortality rate of the flu.

Statewide, the virus prevalence was 13.9 per cent but it was far higher in New York City, where 21.2 per cent tested positive.