The sole volunteer in a trial to test an experimental and controversial gene-editing therapy has died from unknown causes.

Terry Horgan, from Montour Falls, New York, was enrolled in the study in late August with the hope of treating Duchenne muscular dystrophy (DMD).

The 27-year-old was one of the first Americans to be treated with CRISPR – which works by editing genes by precisely cutting DNA and letting the natural repair process take over.

His rare genetic muscle-wasting disease is caused by a mutation in the gene needed to produce a protein called dystrophin.

As of now, the exact cause of Horgan’s death last month remains unclear.

But his death is raising questions about the overall prospect of gene-editing therapies, which have buoyed hopes among many families facing rare and incurable diseases.

At this point, it’s unclear whether Horgan received the treatment and whether CRISPR, other aspects of the study or the disease itself contributed to his death.

Deaths are not unheard of in clinical trials, which test experimental treatments and sometimes involve very sick people.

But trials involving CRISPR are relatively new. And Fyodor Urnov, a CRISPR expert at the Innovative Genomics Institute at University of California, Berkeley, said any death during a gene therapy trial is an opportunity for the field to have a reckoning.

‘Step one is to grieve for the passing of a brave human soul who agreed to be basically a participant in an experiment on a human being,’ Urnov said. ‘But then, to the extent that we can, we must learn as much as we can to carve out a path forward.’

Terry Horgan, 27, died last month while participating in a trial for a new gene-editing technology aimed at treating his Duchenne Muscular Dystrophy, a fatal genetic disorder that causes muscle deterioration. 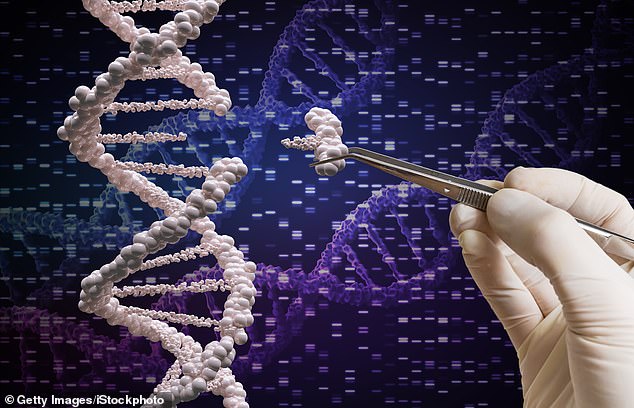 CRISPR is a way of finding a specific strand of DNA in a cell and then removing, adding or altering sections of the DNA sequence. It has the potential to transform the ways in which diseases such as cancers and neurodegenerative disorders are treated.

DMD is a genetic disorder that effects around 20,000 children each year. The disorder occurs in one in 3,500 to 5,000 newborns worldwide.

The condition is caused by a mutation on the X chromosome that creates problems producing the protein dystrophin, which helps strengthen muscle cells and keep them intact.

A dystrophin shortage leads to a person’s muscle fibers breaking down when exposed to enzymes in the body, causing them to lose strength necessary to carry out daily tasks.

The condition occurs primarily in males and is typically diagnosed early between the ages of two and six.

DMD is typically treated with a corticosteroid, which slows disease progression.

The introduction of corticosteroid can alter levels of the hormone testosterone. That can lead to delayed puberty.

Many DMD sufferers die in their teens. Medical advances in care have extended the lifespan of many patients into their 30s, 40s and 50s in recent years, though.

HOW DOES CRISPR WORK?

Unlike other gene-silencing tools, the Crispr system targets the genome’s source material and permanently turns off genes at the DNA level.

The DNA cut – known as a double strand break – closely mimics the kinds of mutations that occur naturally, for instance after chronic sun exposure.

But unlike UV rays that can result in genetic alterations, the Crispr system causes a mutation at a precise location in the genome.

When cellular machinery repairs the DNA break, it removes a small snip of DNA. In this way, researchers can precisely turn off specific genes in the genome.

Cure Rare Disease, which funded the study and was founded by Horgan’s brother,  said in a statement: ‘The loss of Terry is heartbreaking, and he will be remembered as a hero.’

Cure Rare Disease said multiple research teams across the US are reviewing likely cause of Horgan’s death, adding: ‘This is a complex undertaking and could take up to four months.’

Cure Rare Disease, which supports development of 18 other therapeutics, said in its statement that the teams’ work is essential not only to shed light on the study’s outcome but also ‘on the challenges of gene therapy broadly.’

The researchers have supplied a report of the incident to the Food and Drug Administration (FDA), as is required for clinical trials.

The agency also approved the trial, which was led by Dr Brenda Wong, a pediatric neurologist at the University of Massachusetts.

CRISPR has been both praised and bashed since it was first unveiled in 2012.

The technology works by finding a particular thread of DNA in a cell and then altering or removing that DNA.

Some scientists believe the gene editing technology could one day help cure patients of cancer or HIV, allowing doctors to fix faulty DNA.

The inventors of the tool won a Nobel Prize in 2020.

CRISPR, or Clustered Regularly Interspaced Short Palindromic Repeats, has the potential to transform medicine by helping treat and prevent serious diseases such as cancers and neurodegenerative conditions.

Despite its promise, CRISPR is not perfect.

Safety issues in gene editing technology research are not unheard of.

There is a risk of erroneously changing the DNA or RNA in regions other than the target site, which could result in unwanted side effects. For example, unintended modification of a tumor suppressor gene can result in cancer.

A major scandal rocked the world in 2019 when Chinese scientist He Jiankui was imprisoned after modifying the DNA of twin girls Lulu and Nana before birth to make them resistant to HIV.

He’s work to manipulate the genes of human embryos was deemed ‘monstrous,’ ‘unethical,’ and ‘very dangerous’.

A group of over 100 scientists in China blasted He’s work in 2018: ‘Conducting direct human experiments can only be described as crazy.’

The group added, ‘Pandora’s box has been opened. We still might have a glimmer of hope to close it before it’s too late.’

In 2019, a group of scientists proposed a worldwide moratorium on human germline editing.

They wrote: ‘By ‘global moratorium’, we do not mean a permanent ban. Rather, we call for the establishment of an international framework in which nations, while retaining the right to make their own decisions, voluntarily commit to not approve any use of clinical germline editing unless certain conditions are met.’

Late last year, Pfizer reported the death of a patient in its early-stage trial for a different Duchenne muscular dystrophy gene therapy.

In 1999, meanwhile, 18-year-old Jesse Gelsinger died during a study that involved placing healthy genes into his liver to combat a rare metabolic disease.

Scientists later learned that his immune system overreacted to the virus used to deliver the therapy.

The latest fatality linked to CRISPR technology is likely to undermine public trust that it is being used in an ethical, safe way.

The study’s sample size of just a single patient was a sticking point for Dr Caplan.

Horgan’s death ‘may make us think whether we really do like studies that are just on one person, and do we want to say: ‘No, ethically, you’ve got to at least have a trial where you line up 5, 10, 20 people (and) you learn from the data.”

Terry Horgan was diagnosed with DMD at age three. He loved computers as a kid — once building his own — and would play catch in the driveway with his family when he could still walk, according to a statement from Cure Rare Disease.

Cure Rare Disease called Horgan ‘a medical pioneer whose courage and unflinching determination has paved the way for increased focus and attention on funding and developing new therapies for patients with rare and ultra-rare conditions.’