The 25-year-old Jones is set to enter free agency this offseason after the Giants previously declined the fifth-year option in his rookie contract.

‘We’d like Daniel to be here,’ said Schoen. ‘He said it [Sunday], there is a business side to it. But we feel like Daniel played well this season. 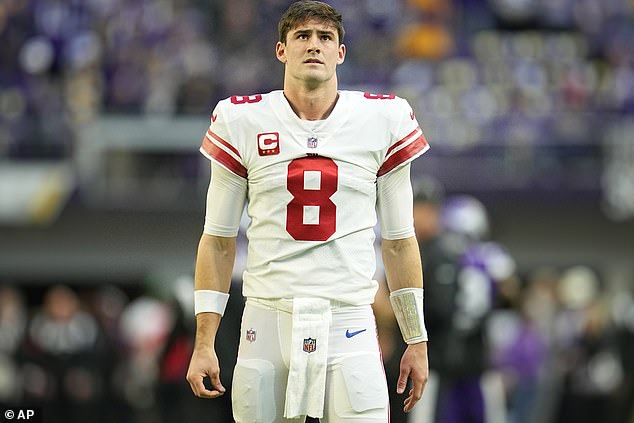 ‘He’s done everything we’ve asked him to. … We would like to have Daniel Jones back.’

The Giants have the options of either agreeing to a long-term contract with Jones or using the franchise tag to lock him up for at least the season albeit at an very high salary.

This offseason the league salary cap is projected to be $220 million which would set a quarterback playing on the tag to make at least $31.7 million for the season.

Jones had the best season of his young career in what became a prove-it year in the first season of the new regime of Schoen and first-year head coach Brian Daboll.

Both sides are expected to open contract talks next month while the deadline for teams to franchise tag a player is March 7. 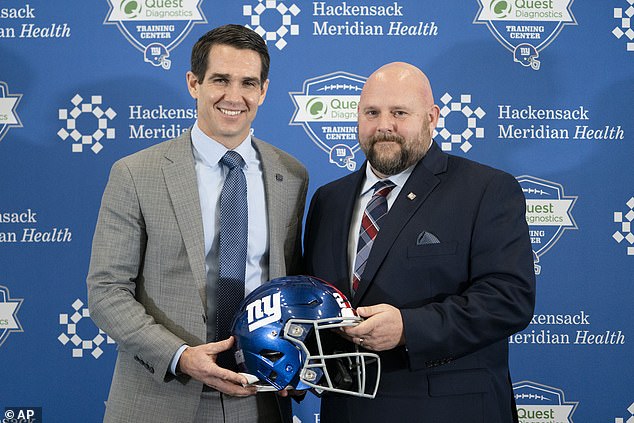 ‘Hopefully we can get something done with his representatives. That would be the goal, to build a team around him where he could lead us to win a Super Bowl.’

Jones threw for 3,205 yards and completed 67.2 percentage this season to go along with 15 touchdown passes and five interceptions, he also ran for another 708 yards and seven touchdowns.

‘I really enjoyed my time here, and I want to be here,’ Jones said. ‘I think there’s a business side of it all, and a lot of that I can’t control.’

‘I have love and respect for this organization and ownership and the guys in this locker room. ‘So I’d love to be here. I really enjoyed being here, and we’ll see how it all works out.’ 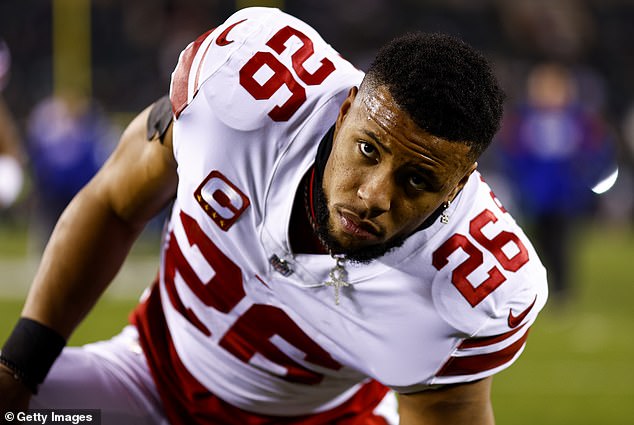 Giants running back Saquon Barkley is also set to enter free agency this month, however it did not seem like as much of a priority for Schoen.

‘Listen, Saquon’s done everything we’ve asked him to do and he’s a good football player,’ Schoen said. ‘Again, the positional value, we’ll get into how we want to build this team and allocate our resources. That is what it comes down to.

‘Again, he’s a good football player. He was durable for this year. He played well and, again, he’s a guy we would like to have back.’

Barkley recently told reporters he wasn’t ‘concerned about resetting any [running back] markets,’ and that he couldn’t imagine the playoff loss to the Philadelphia Eagles ‘being the last time being in a Giants uniform.’

If Barkley and the Giants are not able to reach a deal, the projected franchise tag salary for a running back is around $9.9 million.