Coronavirus dead across New York could be temporarily buried on the city’s famous Hart Island, where unclaimed and unidentified bodies are buried by prison inmates in mass graves, as morgues across the city continue to overflow and the death toll ticks up.

Hart Island is ordinarily used to bury unidentified or unclaimed bodies. It was used after the Spanish Flu and has now emerged as a possible mass burial site for coronavirus victims.

Drone footage taken last week on Thursday – which is the day bodies are buried there every week – by The Hart Island Project shows inmates in hazmat suits digging graves on the island, possibly for victims of the virus which has claimed more than 3,400 lives across New York City.

In a normal week, 25 bodies are buried there. According to Jason Kersten, a spokesman at the Department of Correction, which oversees the island, that number has risen to 72 since the end of March, when the virus exploded in New York City.

Mayor Bill de Blasio told reporters Monday: ‘We may well be dealing with temporary burials so we can then deal with each family later.

‘Obviously, the place we have used historically is Hart Island.

‘We’re going to try and treat every family with dignity, respect, (meeting) religious needs of those who are devout.’

It comes after public officials sparked panic and disgust by claiming some of the dead would be temporarily buried in public parks.

That suggestion, made by councilman Mark Levine, has since been dismissed but the question of what to do with the escalating body count remains pertinent.

Rikers Island inmates in hazmat suits dig graves on Hart Island on April 2. The island is where unidentified or unclaimed bodies have been buried for years. Now, the city is suggesting it could become a mass burial site for coronavirus victims. Burials ordinarily take place on Thursdays, which is when this video was filmed overhead 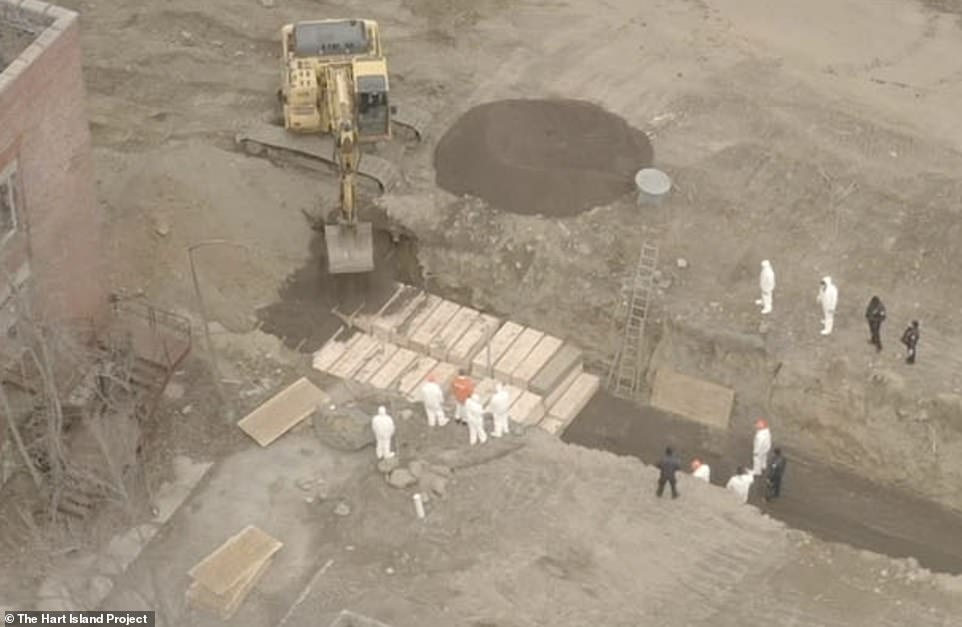 Bodies are buried three deep in wooden, unmarked caskets. Normally, 25 are buried a week. In the last week of March, however, 72 were buried. It is not known if any or all were coronavirus patients or whether or not the bodies, once in the medical examiner’s office, were tested for COVID-19 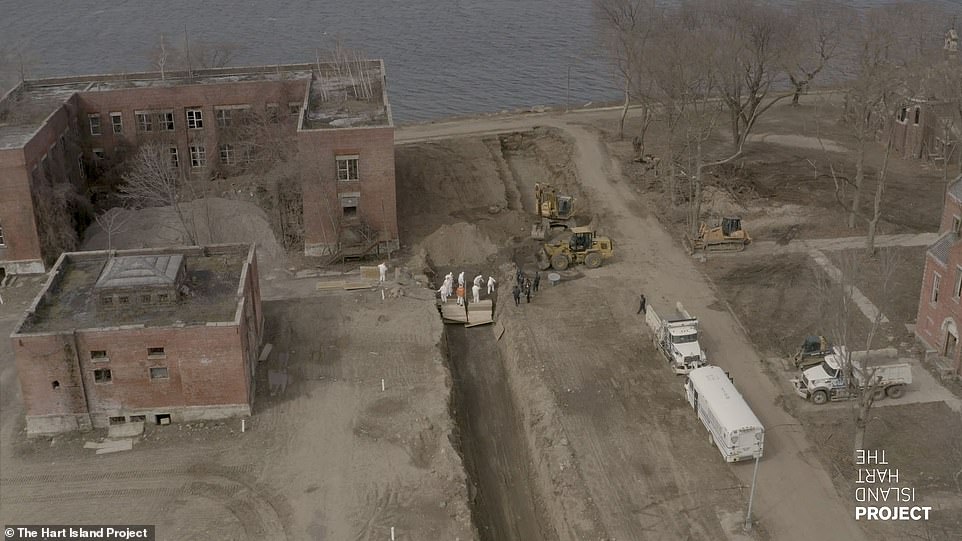 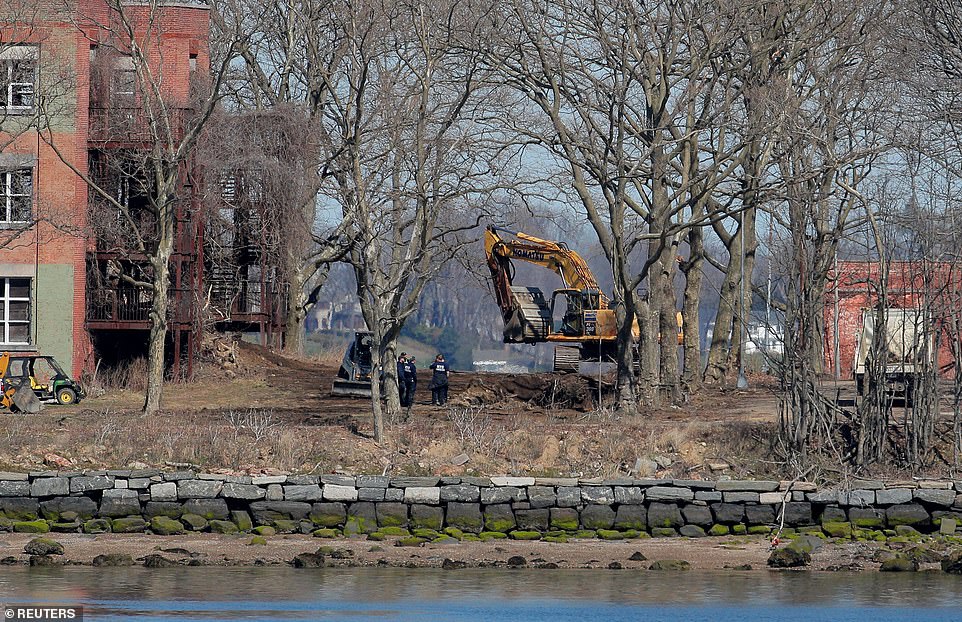 Workers are seen on Hart Island yesterday, the former location of a prison and hospital that is a potter’s field burial site of as many as one million people and which New York City is considering serving as a site for temporary interment of victims of coronavirus 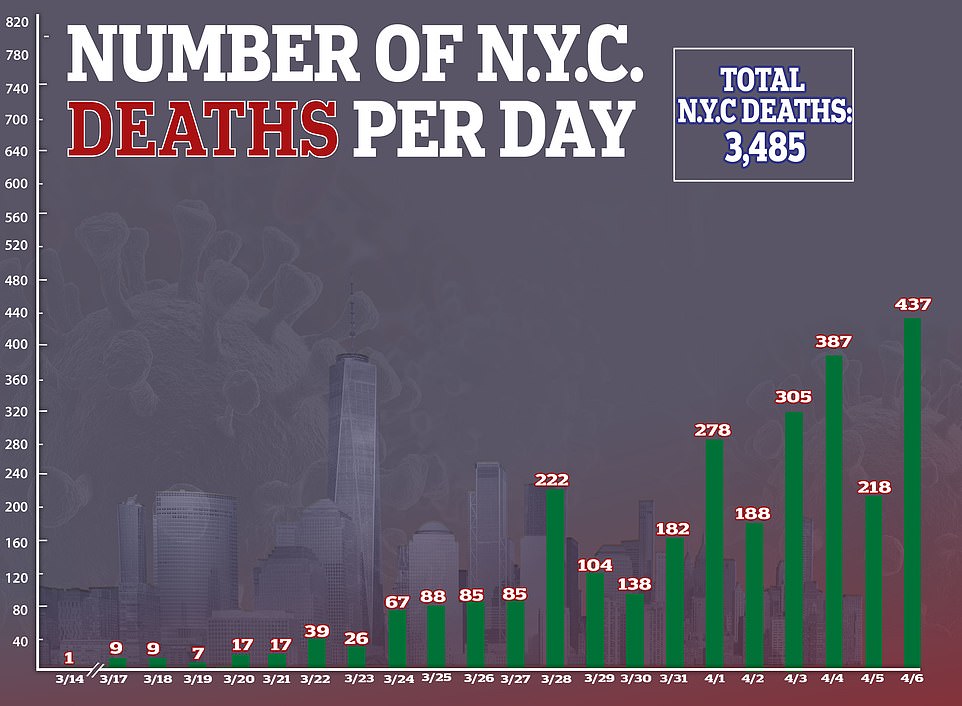 Mark Levine, a Manhattan council representative, tweeted on Monday: ‘Trenches will be dug for 10 caskets in a line. It will be done in a dignified, orderly and temporary manner. But it will be tough for NYers to take.’

The comments caused a stir, prompting Levine to clarify his remarks by saying he understood any temporary burials would be carried out on Hart Island rather than public parks.

Hart Island, sometimes referred to as Hart’s Island, has a grisly history and started being used as a cemetery during the civil war in 1868 and there are now more than a million bodies buried there.

Since then it has been used as a women’s psychiatric institution, a tuberculosis sanatorium, a potter’s field burial site and storage for Cold War anti-aircraft missiles.

After its first use as a cemetery in 1868, the island started to be used as a potter’s field for unmarked graves and accounts from the time describe bodies piling up on the island after being transported from hospitals in the city.

During the Spanish Flu, when more than 500,000 Americans died, thousands were buried at Hart Island as city burial sites were overwhelmed.

It is estimated they would be asked to remove between 50 and 5,000 victims a day during the epidemic.

In more recent times, thousands of unclaimed AIDs victims have been buried on the island. The first were buried in 1985 away from other graves, in the belief that AIDs could infect dead bodies.

The island in Long Island Sound has also been the site of a homeless shelter, a boys’ reformatory, a jail and a drug rehabilitation center.

During the Cold War, Project Nike anti aircraft missiles were stationed on the island.

An amusement park was planned for the site in the 1970s, but it was never built as it was too close to a prison.

During World War II the island was used as a correctional facility when the population of Rikers Island was moved there.

The island was also used as a homeless shelter which operated from 1951 to 1954 and an alcohol treatment facility in 1955, before returning to being used as a common grave in the 1980s.

It is still used to bury unknown or unclaimed people with bodies from across New York taken to the site twice a week and laid to rest by inmates at Rikers Island.

He added: ‘I have spoken to many folks in City gov’t today, and received unequivocal assurance that there will be *no* burials in NYC Parks.

‘All have stated clearly that if temporary interment should be needed it will be done on Hart Island.’

The mayor’s spokeswoman, Freddi Goldstein, stressed that the city government was not considering using local parks as cemeteries. But she added that Hart Island, where around one million New Yorkers are already buried in mass graves, may be used ‘for temporary burials, if the need grows’.

Interments of coronavirus fatalities on the island may already have taken place.

She told CBS New York: ‘Within an hour they’ve buried 25 bodies, so it’s a very efficient system of burials.

‘Hart Island has been used during the 1918 flu epidemic. Thousands of New Yorkers were buried there, diphtheria, tuberculosis.’

One former Rikers Island inmate who spent five months working on the island until February this year has also told of the grim operation that goes on there.

Vincent Mingalone said in a voiceover of the video that he worked as a team of around seven men who formed a supply chain to move the bodies from a truck to the mass grave every Thursday.

They were stacked three deep and then covered with sand and soil.

Mingalone said that he is now worried about whether there will actually be enough inmates willing to do the job. When he was incarcerated, he said no one else volunteered to do the work because they viewed it as ‘ghoulish’ or ‘dirty’ and because it was low paid compared to other prison jobs.

Since the pandemic erupted, 1,000 inmates have been released from Riker’s Island, leaving fewer people to bury the bodies when they keep piling up.

‘My concern was, they released a lot of sentenced inmates. So I don’t know if they’re going to get the inmate labor.

‘It was one of the lower paying jobs compared to maybe working the car wash or cleaning or any of the other outside clearance jobs. A lot of people didn’t want that job.

‘Now it’s going to be slim pickings because a lot of inmates have all been released because of this pandemic,’ he said.

The island is home to the city’s potter’s field, a cemetery for people with no next of kin or whose families cannot arrange funerals.

Over the last 160 years Hart Island has been a Union Civil War prisoner-of-war camp, a psychiatric institution, tuberculosis sanatorium and a potter’s field burial site.

Since 1861 more than a million people have been buried there, with trucks still arriving at the site twice a week from morgues across New York.

One there inmates from Rikers Island are paid 50c an hour to act as pallbearers and bury the dead.

The dead are interred in trenches, with babies placed in coffins, which are stacked in groups of 1,000, measuring five coffins deep and usually in 20 rows.

Adults are placed in larger pine boxes arranged according to size and stacked in sections of 150, measuring three coffins deep in two rows.

Since the first decade of the 21st century there are fewer than 1,500 burials a year at Hart Island.

Hunt, who has documented Hart Island, added that help would be needed from the military when it came time to reunite families with the deceased. 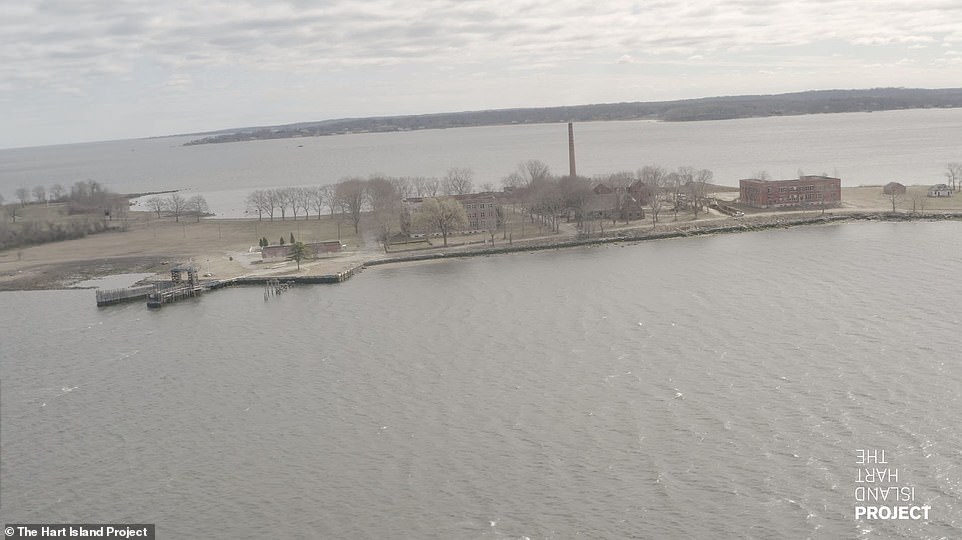 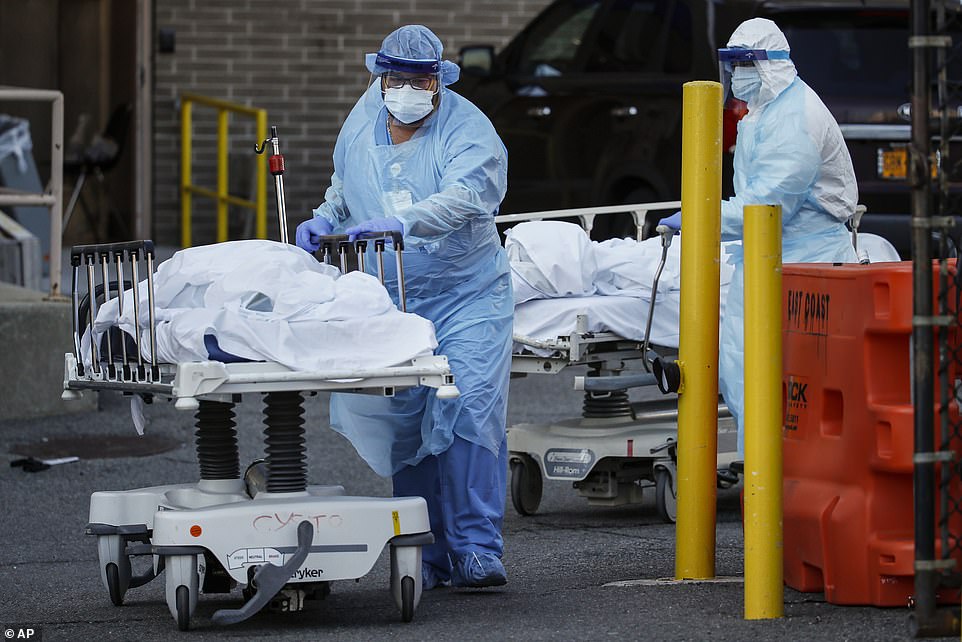 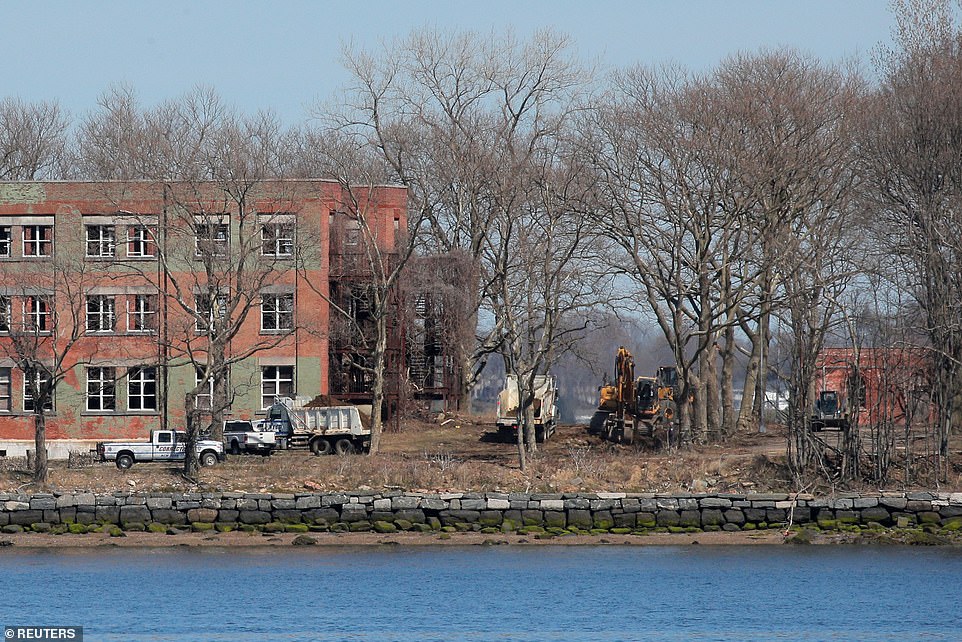 A work site is seen on Hart Island yesterday as it is to be used as a temporary burial site for coronavirus victims. The island is already used as a common grave site 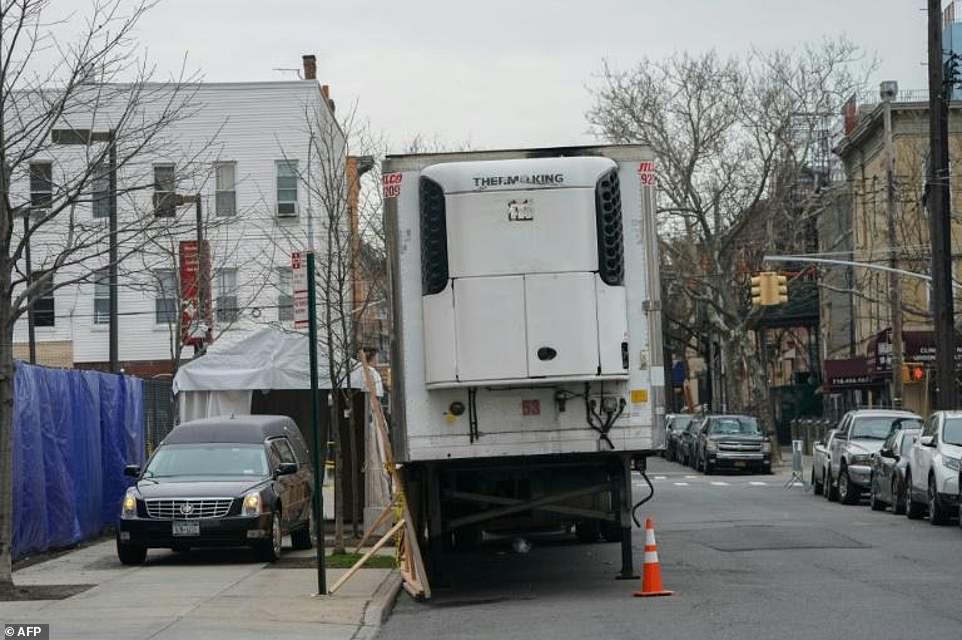 A refrigerator truck pictured (above) for COVID-19 victims outside a Brooklyn hospital on Sunday. Temporary morgues have been set up around New York 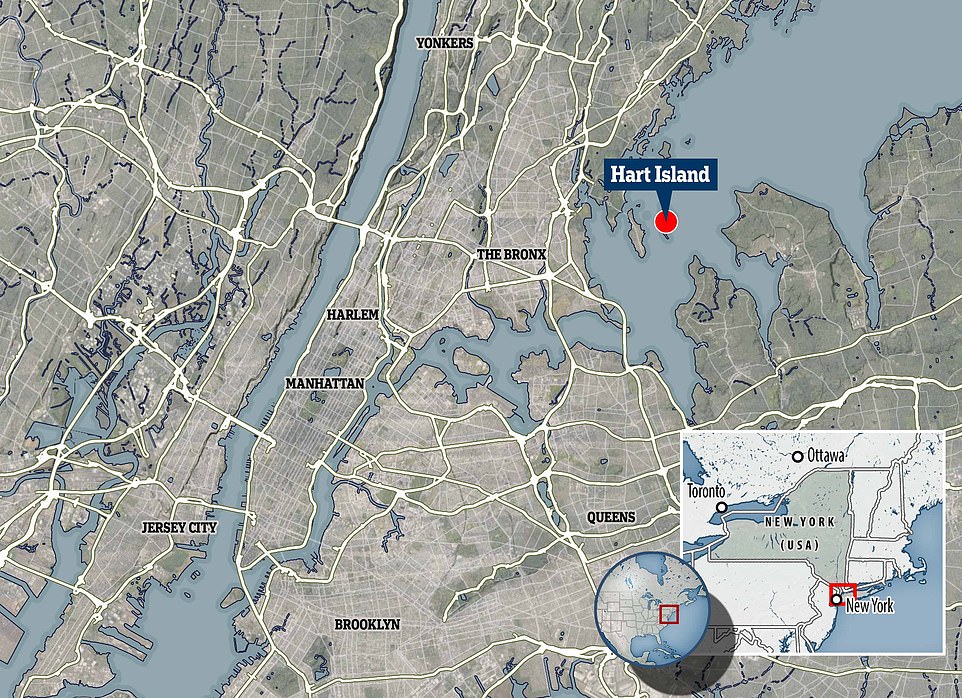 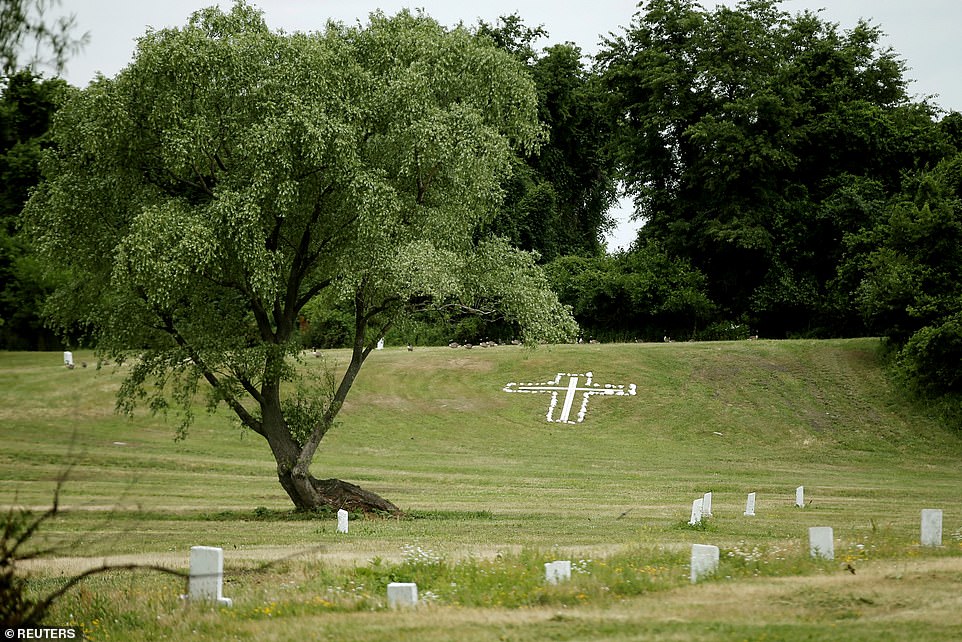 A cross made of stones pictured (above) amid stones marking mass graves on Hart Island, the former location of a prison and hospital 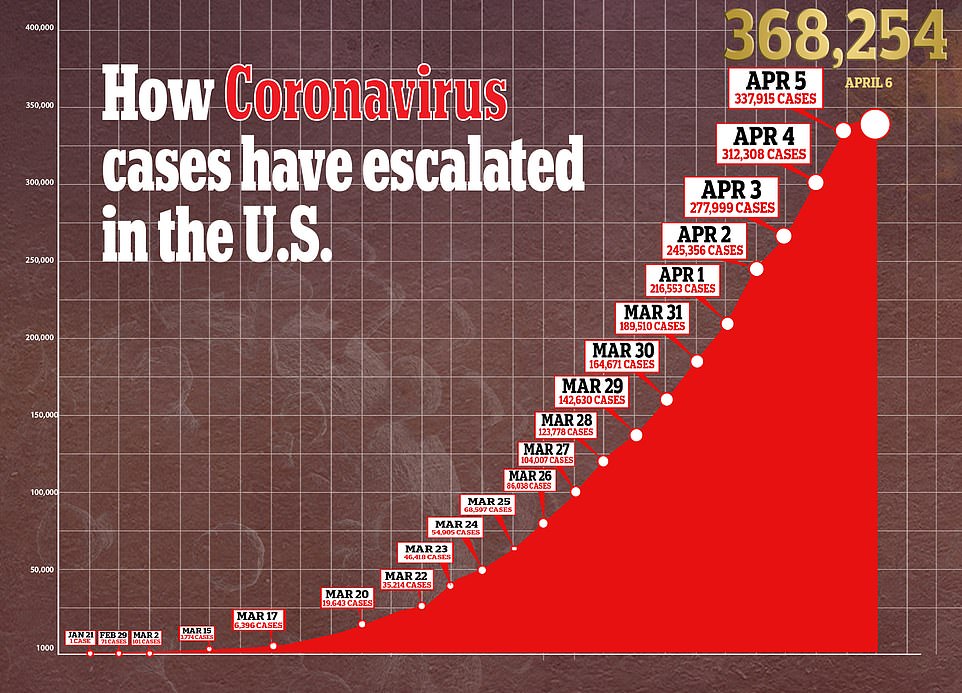 Mayor Bill de Blasio himself spoke of the possibility of temporary burials ‘to tide us over until the end of the crisis.

‘We are not at that point,’ he told reporters, before refusing to give any more details.

On Monday morning, nine bodies were seen being loaded into trucks outside Wyckoff Hospital in Brooklyn.

Several undertakers interviewed said they were struggling to deal with New York state’s coronavirus death toll of more than 500 a day.

Between Friday and Saturday, a high of 630 deaths were recorded.

Ken Brewster, owner of Crowe’s Funeral Homes in Queens, said: ‘The majority of funeral homes do not have refrigeration or [have] limited refrigeration.

‘If you don’t have the space…you need those trucks,’ added Brewster, whose small business has been bombarded with requests for funeral services for COVID-19 patients over the past week.

He is finding it difficult to cope with the stress generated by influx of bodies, particularly because he himself just lost a cousin and close friend to the pandemic.

Marmo said: ‘The hospitals are pushing [us]. They want the people picked up [as quickly as possible] and the funeral homes don’t have the facilities to handle these bodies.’

Marmo estimates that his homes are currently dealing with three times more bodies that normal and that burials will last well into next month.

Governor Andrew Cuomo announced on Monday that the number of deaths across New York state had flattened out since Saturday’s high, below 600 a day.

He suggested the state may be at the peak of its pandemic, but extended stay-at-home measures until April 29, saying now was not the time to end social distancing. 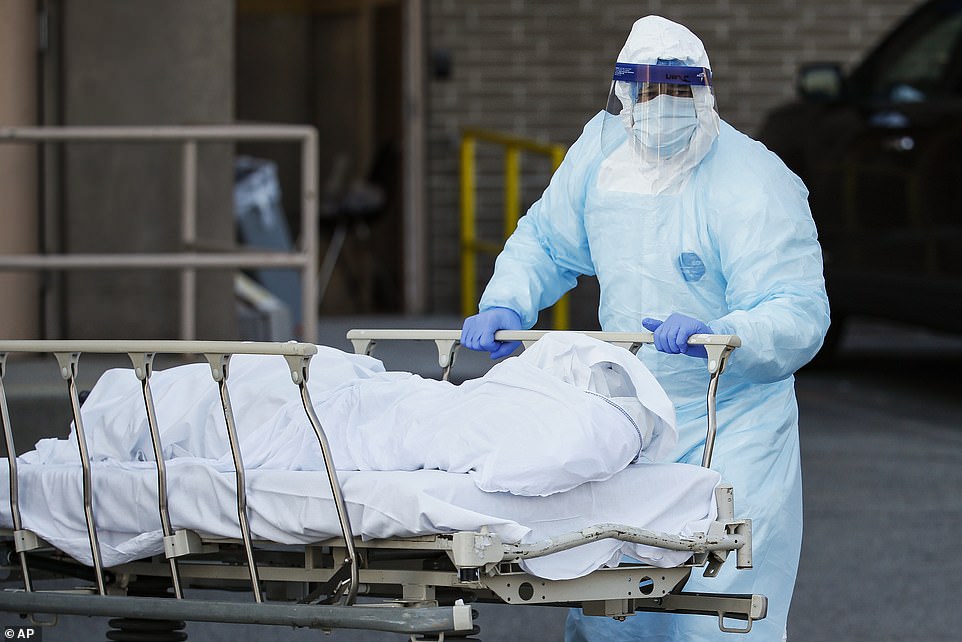 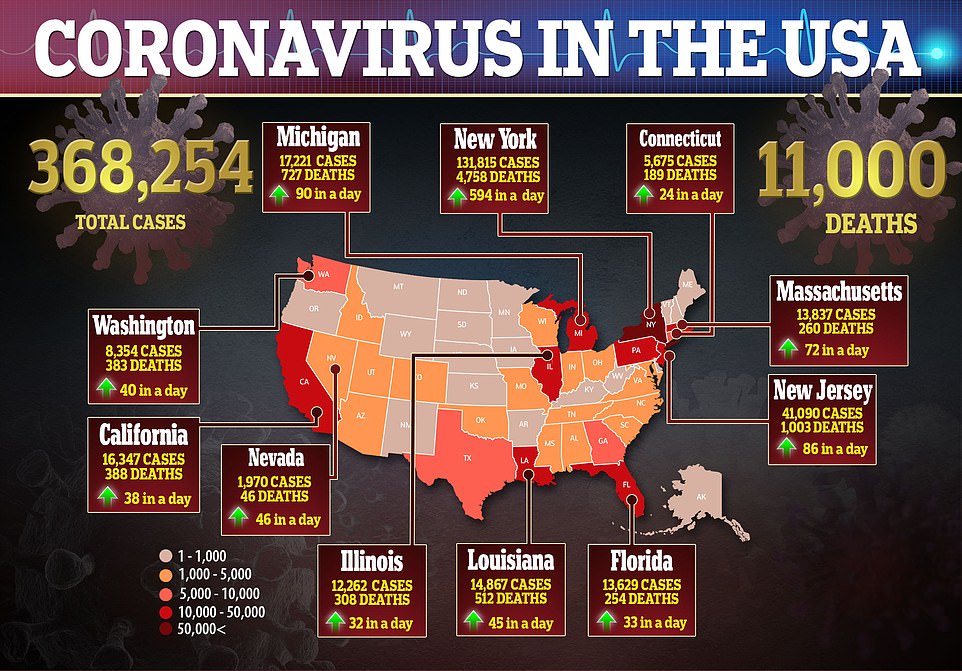