Confronting footage shows people on Argyle Street in the Rocks screaming out in distress as a large group makes their way through a barricade as helpless police and security watch on.

Parents were even forced to hold young children above their heads fearing they would be trampled in the chaos.

The near-disaster unfolded when swarms of revellers started pushing through guarded barriers into the ticketed section to get a better view of the fireworks just before midnight. 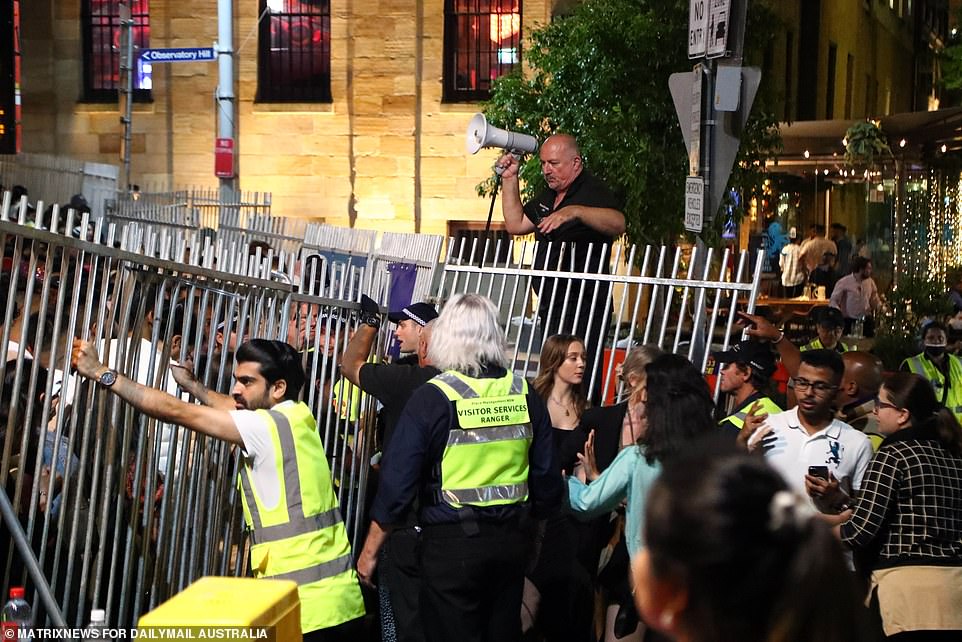 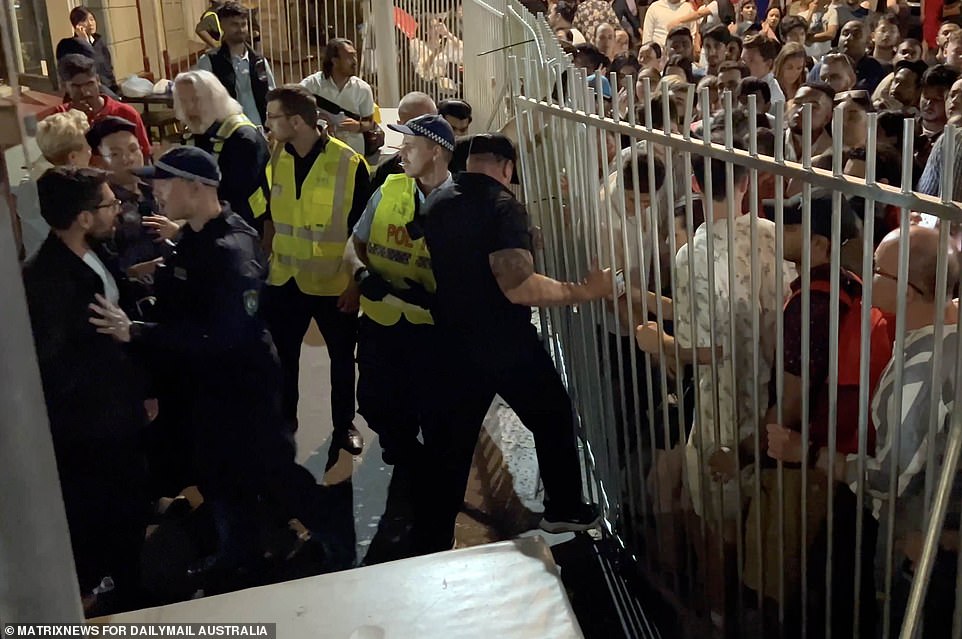 ‘It was really scary, very dangerous and I thought I was going to be badly injured,’ one man caught up in the harrowing scenes who did not wished to be named told Daily Mail Australia.

‘People were trampling me, as I was on the ground with about a dozen other people and some were running over the top of me.

‘I lost my footing when I was pushed to the ground and landed on top of two others.’

He added that the situation was particularly frightening given what happened two months earlier in Seoul, where 196 people where killed in a Halloween crowd crush.

The horrific scenes were sparked in the trendy Itaewon neighbourhood on Octobers 29, when a massive crowd of mostly young adults flocked outdoors for a major street festival on the heels of the Covid pandemic. 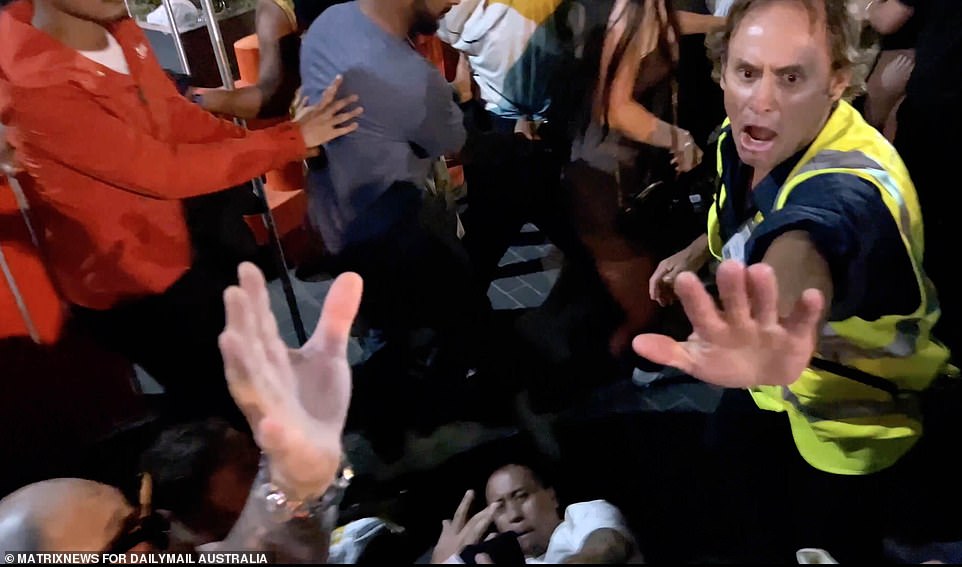 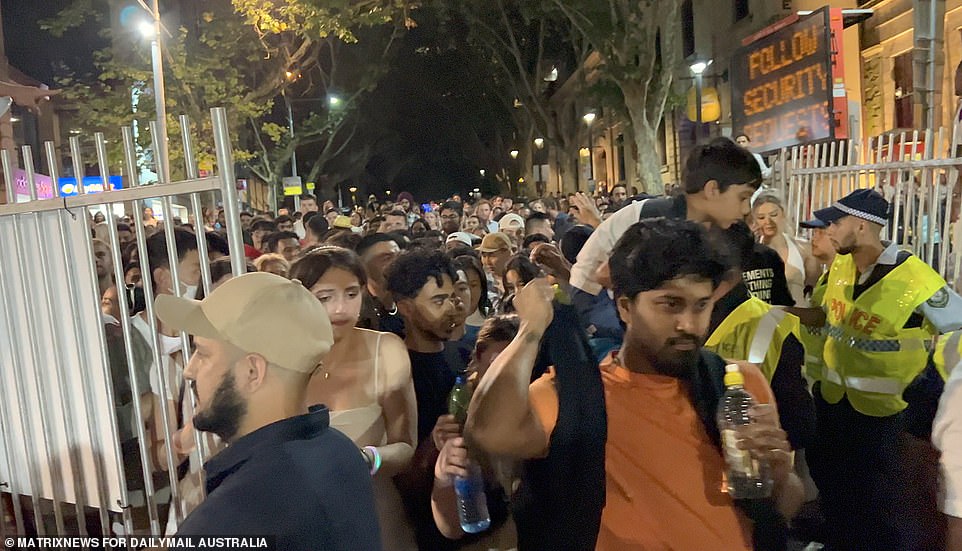 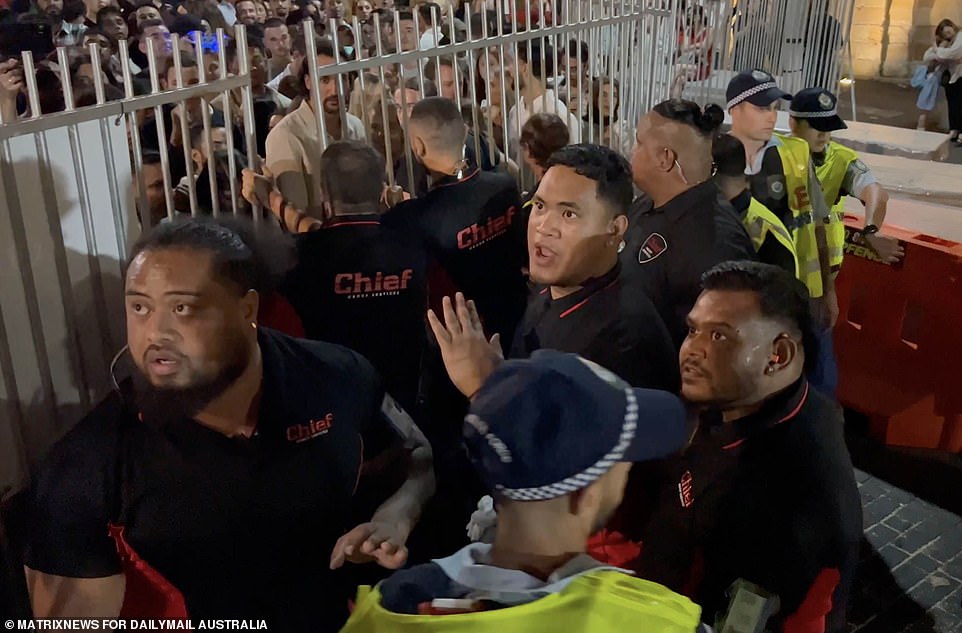 Police and security guards can be seen in video shouting at the crowd in desperation to ‘move back’ but the hoards of people continue to pile in.

Eventually, NSW Police’s Public Order and Riot Squad was called in to get control of the situation.

It is not yet known if there were any injuries.

Police said that while there were ‘a few exceptions’, most people were well-behaved and enjoyed their celebrations safely and responsibly.

‘Several vantage points around the city were at capacity by late-afternoon, as over 200,000 revellers travelled into the city and foreshore areas ahead of the 9pm and midnight fireworks displays,’ a statement said.

‘Just before midnight, large crowds surged towards the Sydney Harbour Bridge resulting in significant police resources being deployed to the area for crowd management.

‘Across the CBD and Sydney Harbour foreshore, 83 arrests were made, and 25 charges laid for various offences, including assault police, assault, prohibited drug related offences, offensive behaviour. Over 200 traffic and railway infringement notices were issued.’

Daily Mail Australia have reached out to police and the City of Sydney for further comment.

Australia has farewelled 2022 and thrown off the shackles of the Covid pandemic with massive celebrations to ring in the new year.

Millions of Aussies flocked to harbours, foreshores, riverbanks and beaches to savour the multi-million-dollar firework displays.

Sydney’s world-famous harbour and bridge was lit up in a spectacular display, while the skies over Melbourne, Brisbane and Adelaide featured spellbinding firework shows.

Revellers were out in force to make up for time lost in the last three years, as celebrations were dampened by the black summer bushfires in 2020 and the Covid pandemic the following two years.

Partygoers made their way into the nation’s CBDs in droves to ring in 2023 in style – with local and state government organisers putting on celebrations bigger and better than ever before.

Crowds in the nation’s focal point Sydney hit around the million mark, as thousands queued up well in advance earlier in the day to vie for a spot on the steps of the iconic Opera House. 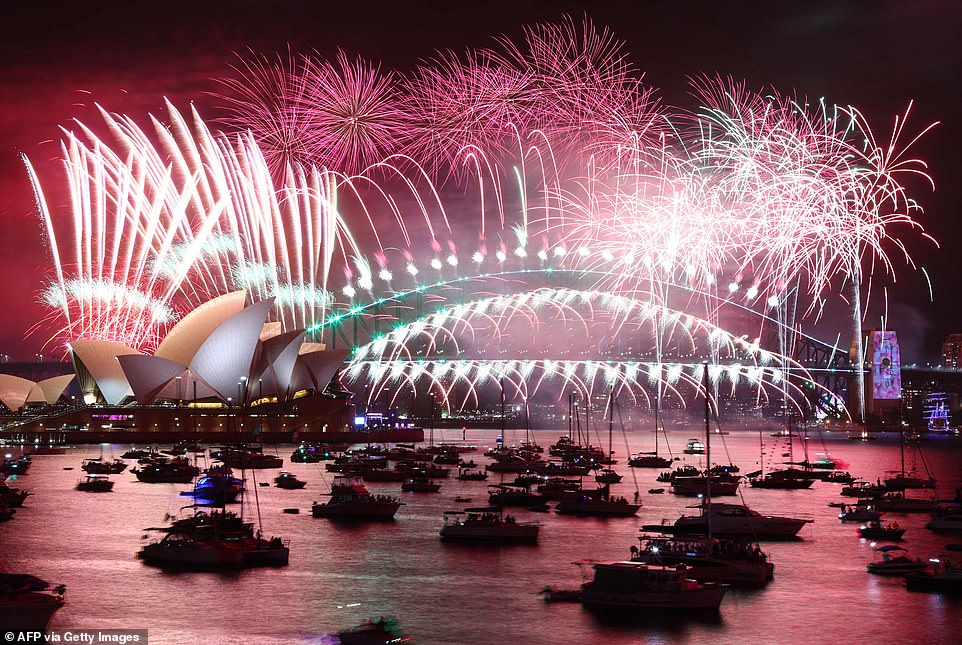 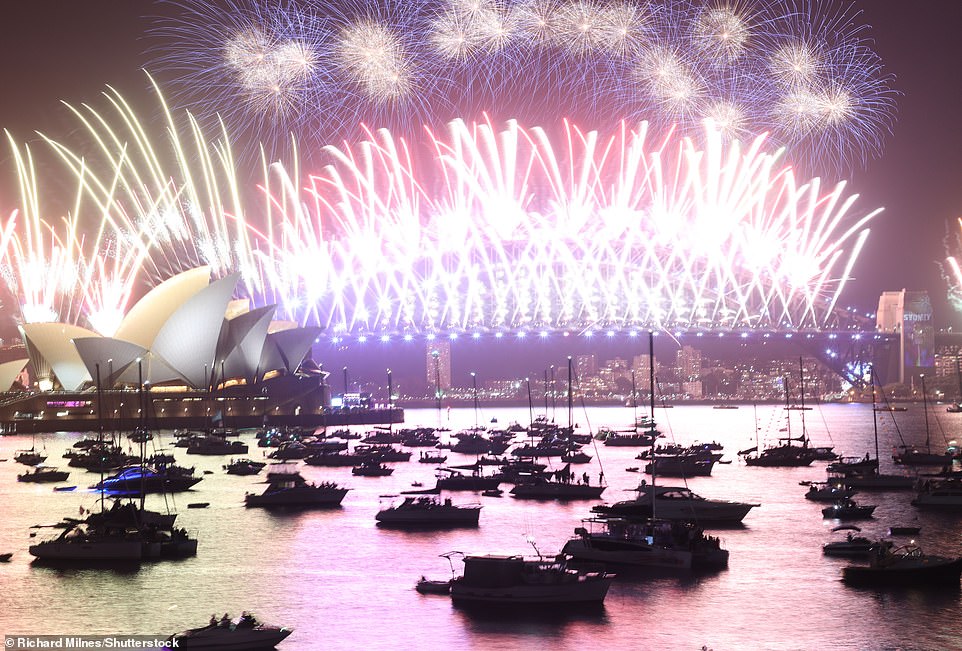 Sydney’s world-famous harbour and bridge was lit up in a spectacular display, while the skies over Melbourne, Brisbane and Adelaide featured spellbinding firework shows 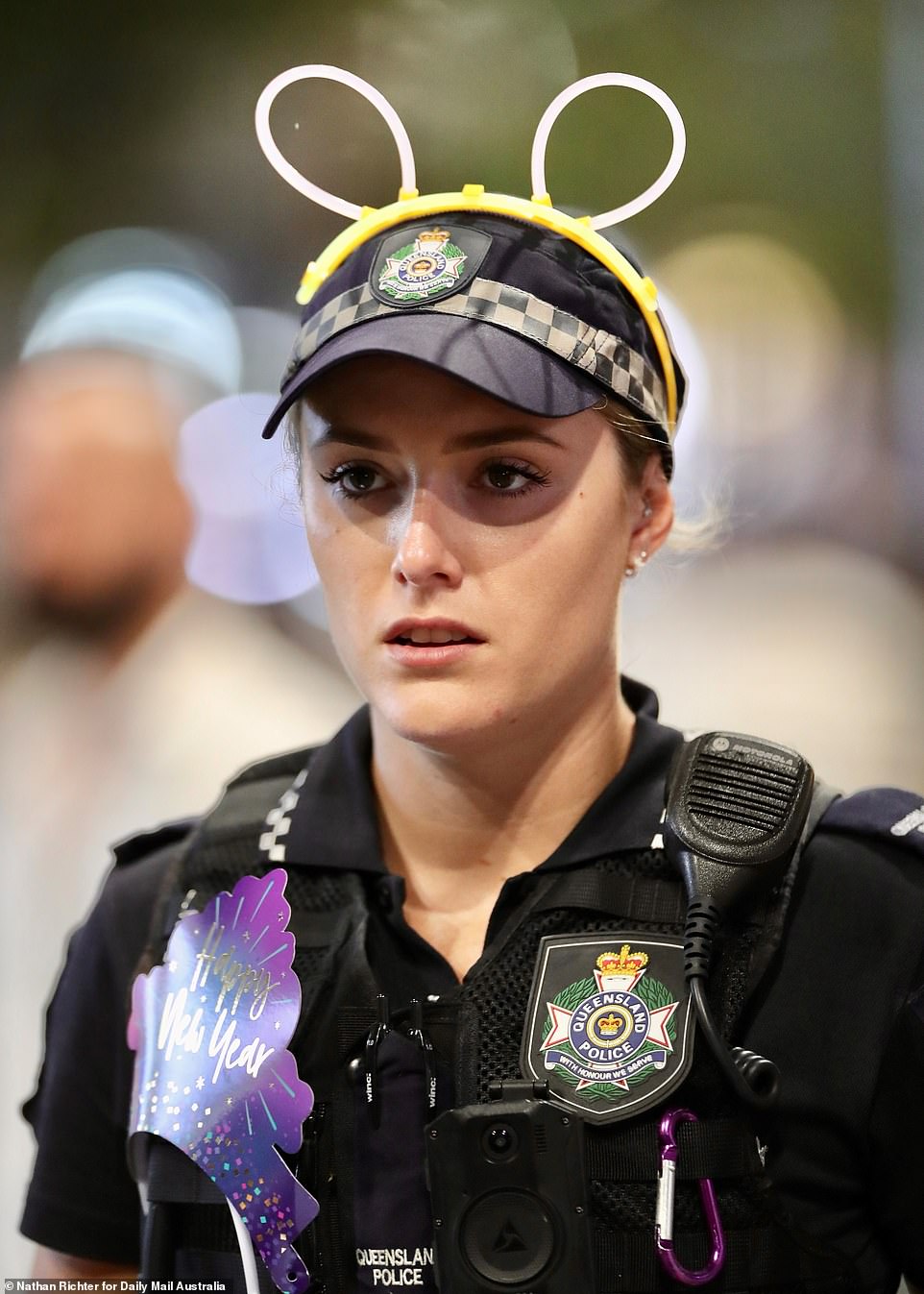 On the Gold Coast police and patrons were in a celebratory mood, as masses flocked to celebratory locations to ring in the new year 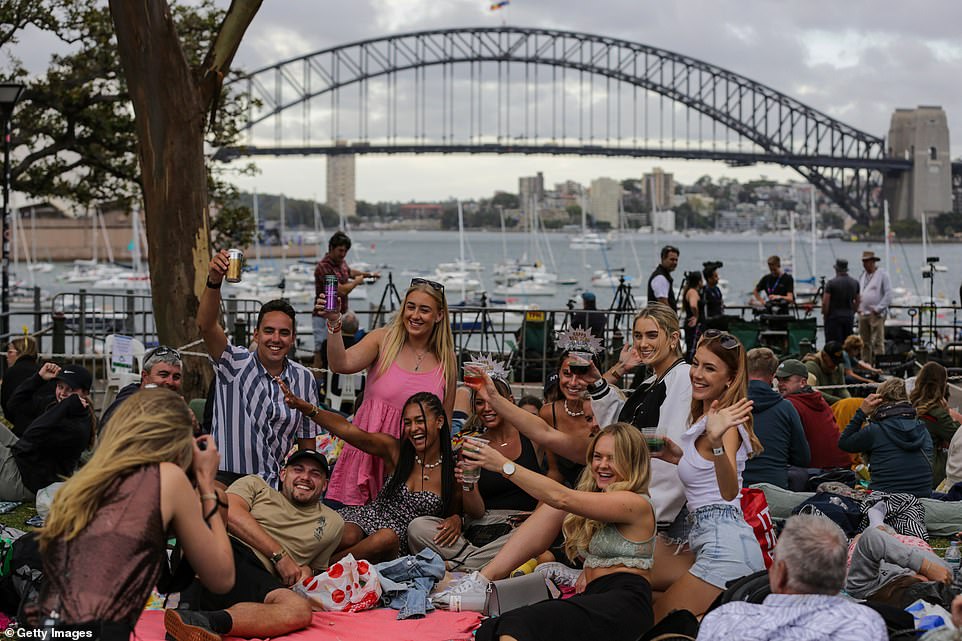 Crowds in the nation’s focal point Sydney, hit around the million mark as people got together to celebrate the end of 2022 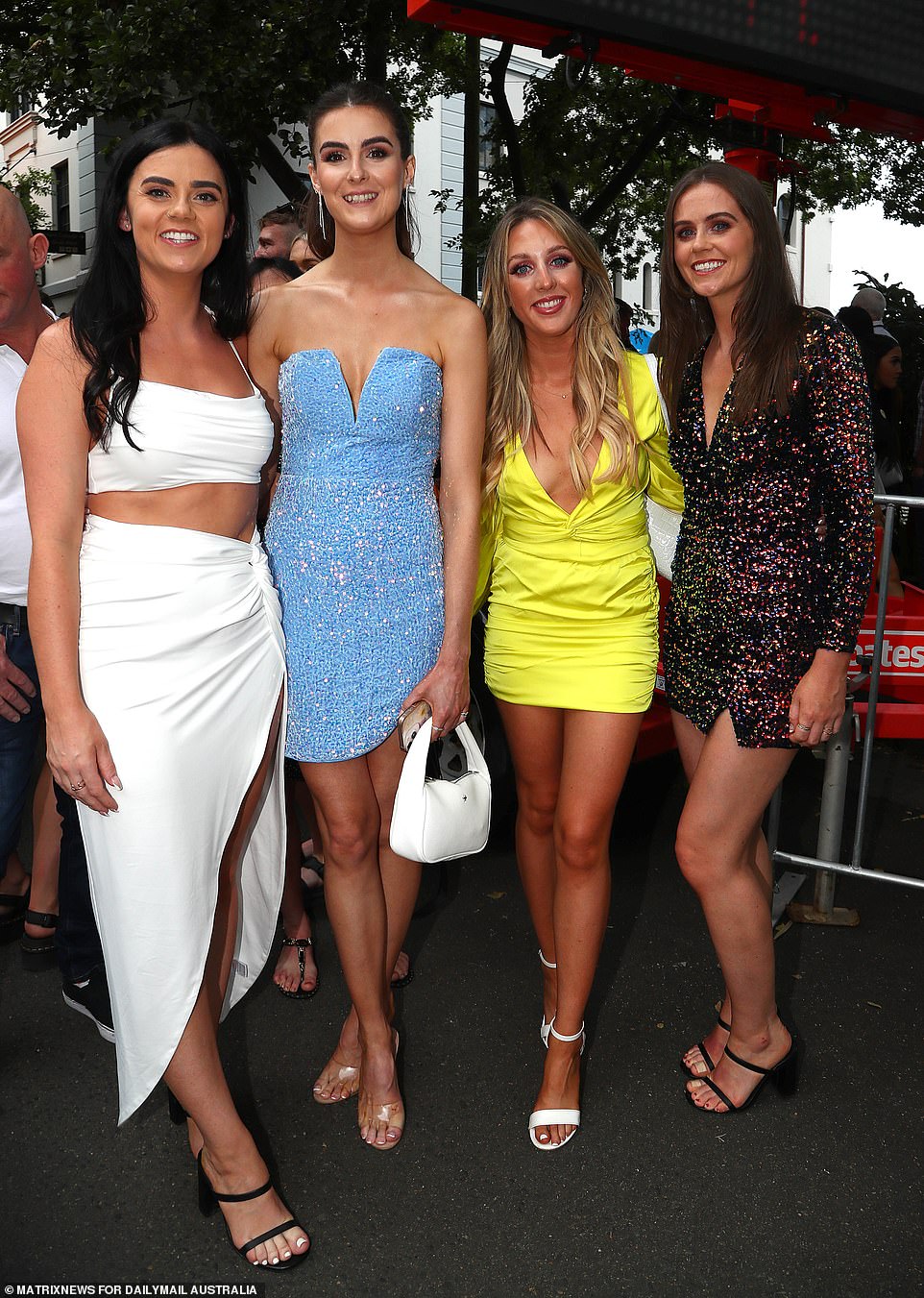 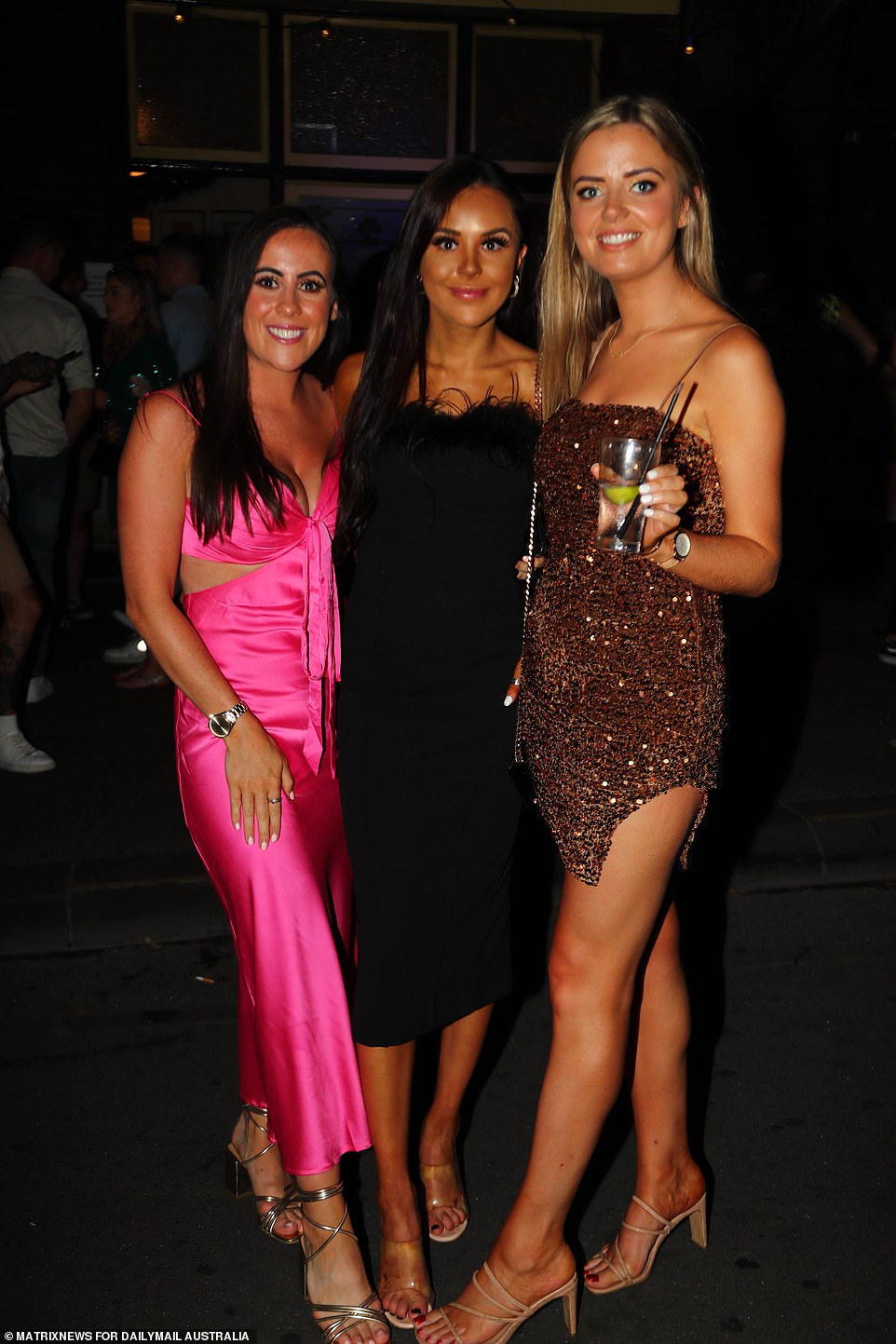 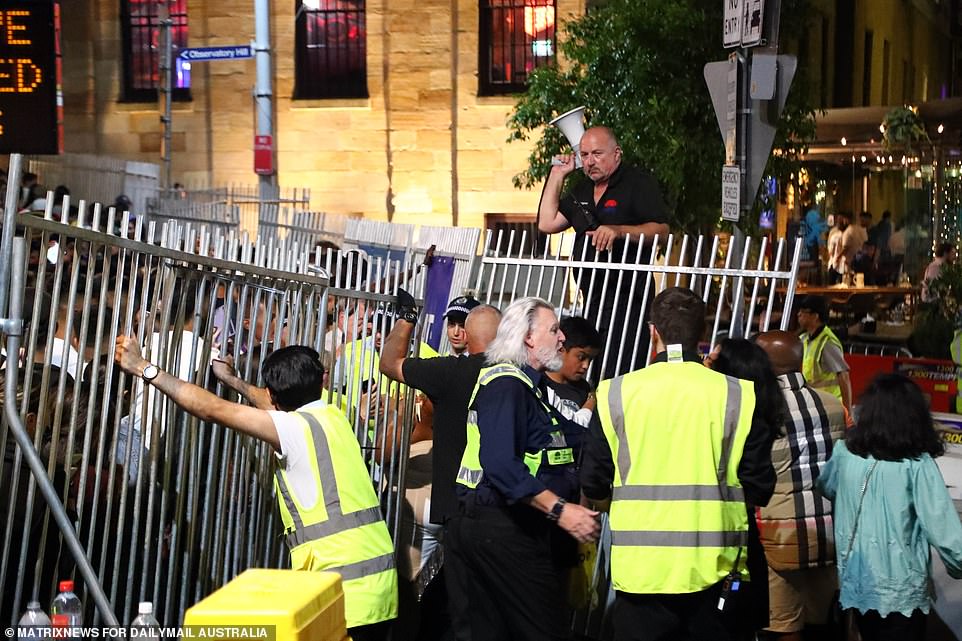 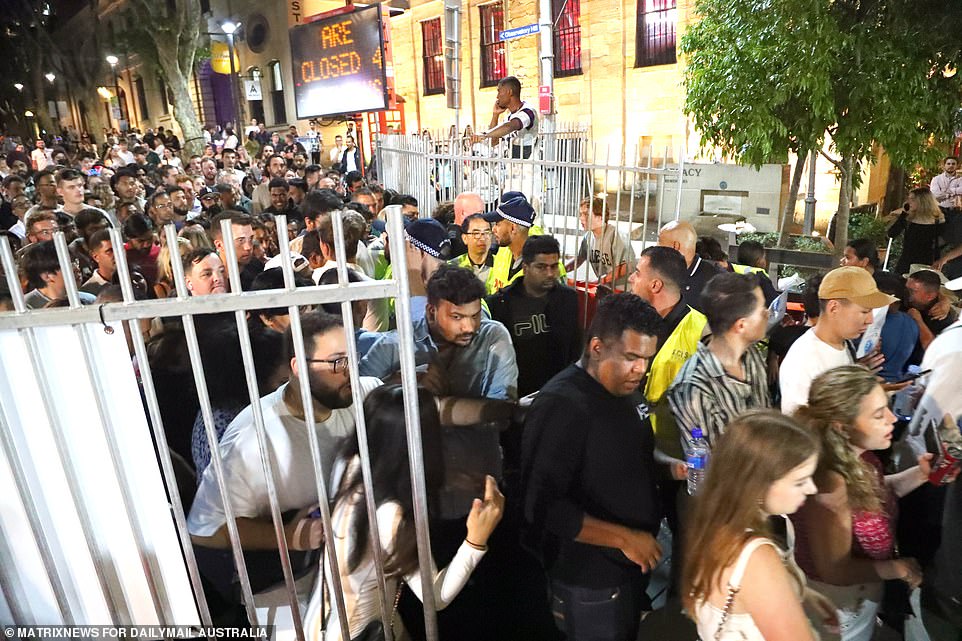 The Harbour City saw an Indigenous smoking ceremony at 7.30pm kick things off before the family-friendly fireworks display dazzled the nation.

In New South Wales’ capital, 13,000 fireworks totalling $7million lit up the sky from the Opera House, Harbour Bridge and rooftops around the city.

In a nod to the upcoming World Pride festival taking place in Sydney in February, the progress pride flag colours were projected onto the Sydney Harbour Bridge at 11pm.

While in Melbourne’s CBD, crowds built up quickly with families and groups of friends flocking to parks for early fireworks, before an estimated 450,000 people continued on to see in the new year.

In what felt like Melbourne’s out of Covid party, revellers took advantage of life without masks with fireworks set off from a record 30 rooftops in celebrations costing around $4million.

Perth put on a show from start to finish with it’s first ever family-friendly show kicking off at 9pm before their traditional Swan River spectacular at midnight.

On the Gold Coast, around 30 tonnes of fireworks brought vivid colours and patterns to the skyline’s at Coomera, Broadwater Parklands, Surfers Paradise, Broadbeach and Coolangatta.

Festivities in Western Australia’s central Kimberley region and Menindee in far west NSW had their celebrations dampened as they were faced with rising floodwaters. 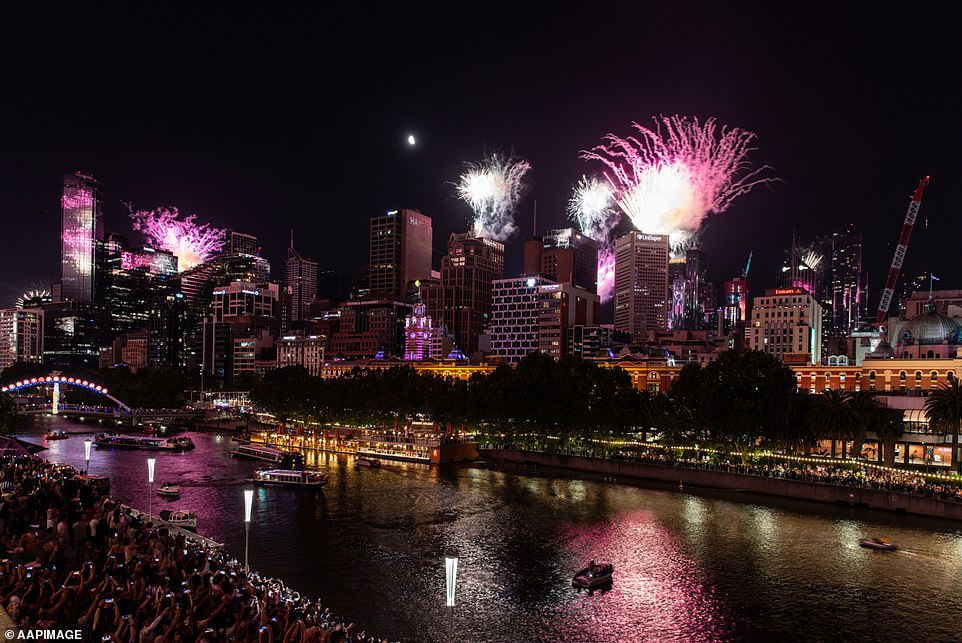 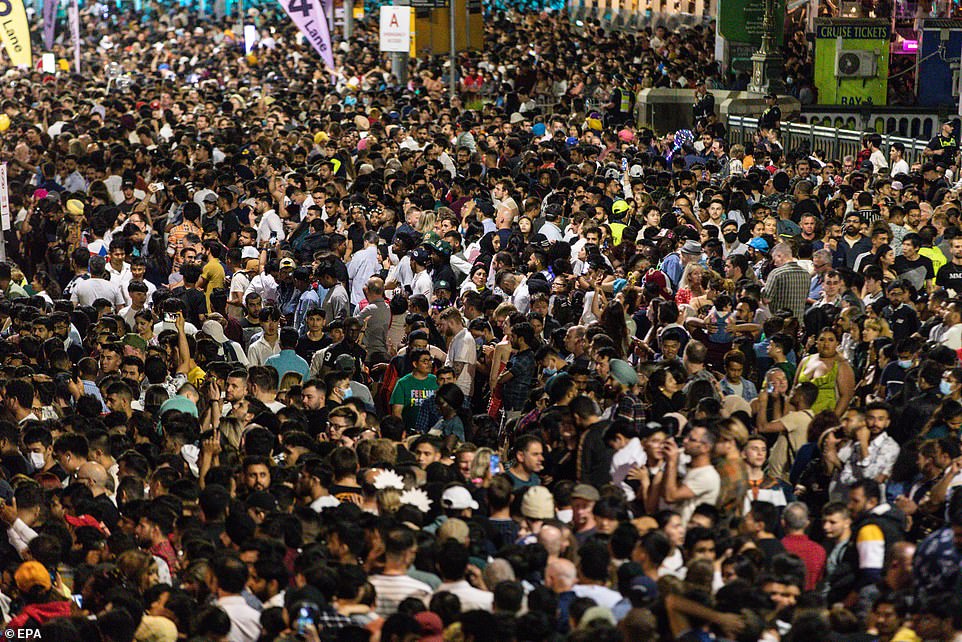 Masses of people turned out to watch the Melbourne midnight fireworks, gathering along the Princes Bridge 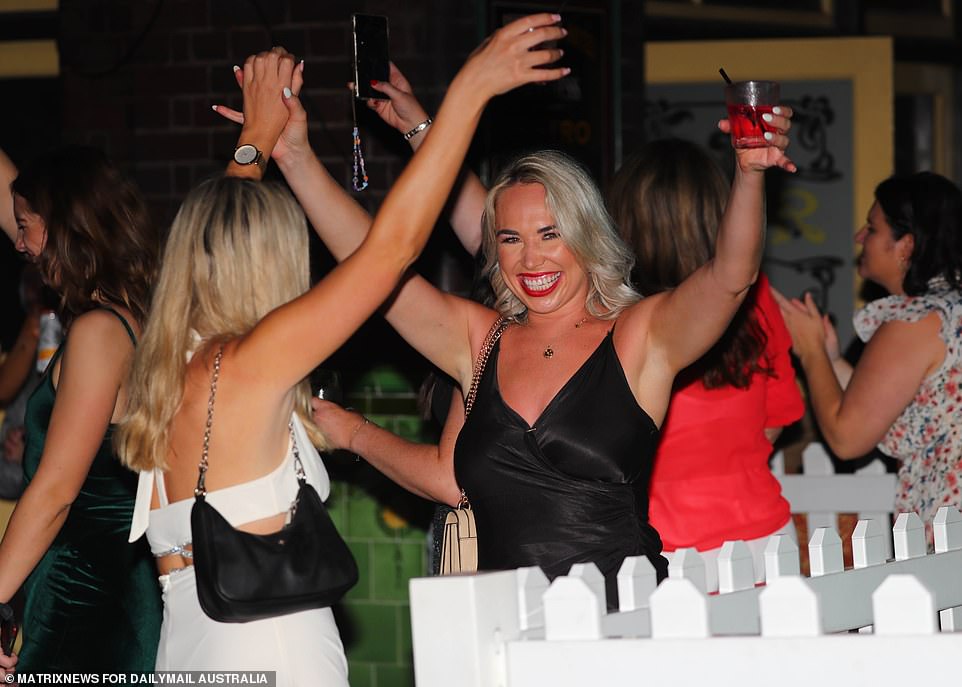 In Sydney’s The Rocks celebrations kicked off with many party-goers dancing throughout the night, with high hopes for the new year 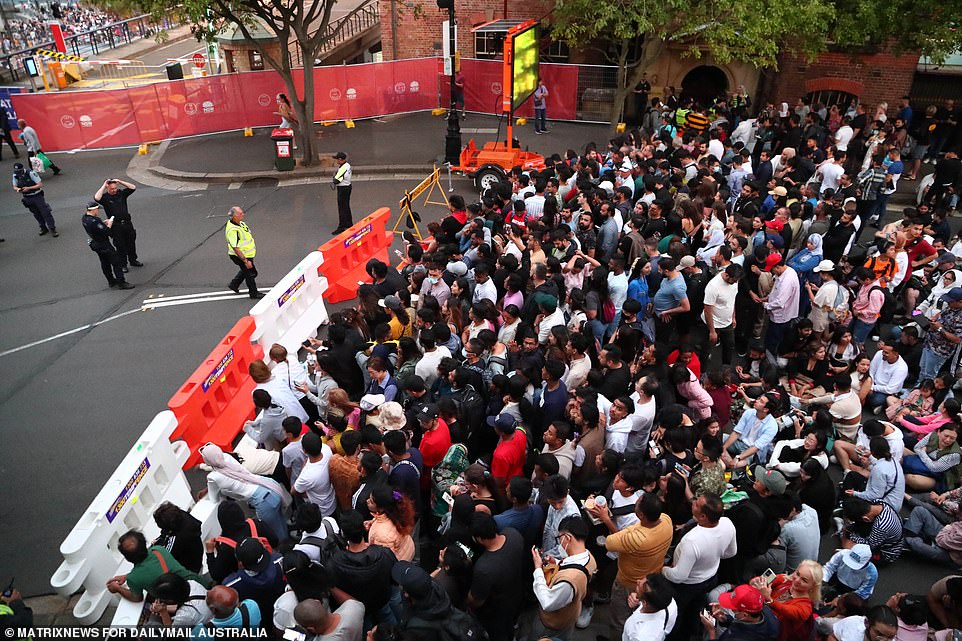 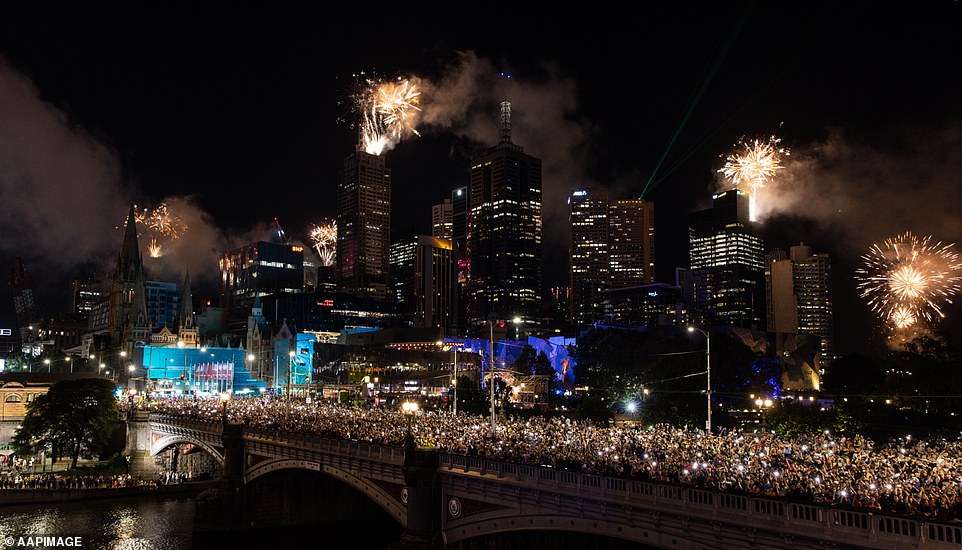 In Melbourne a large fireworks displays were set off at 9.30pm before the feature leaving crowds in awe at midnight, with around half a million people making their way into the CBD 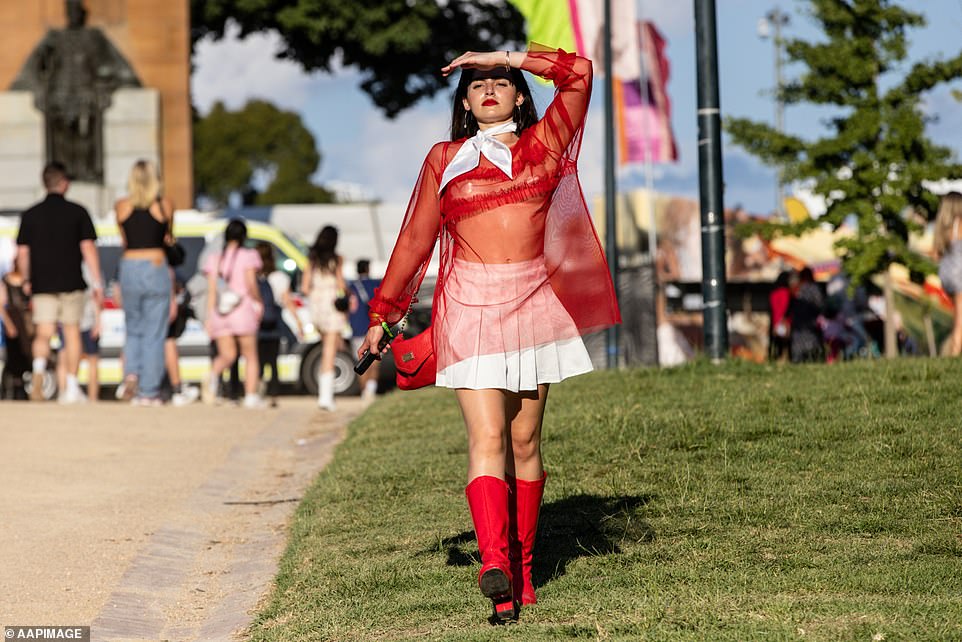 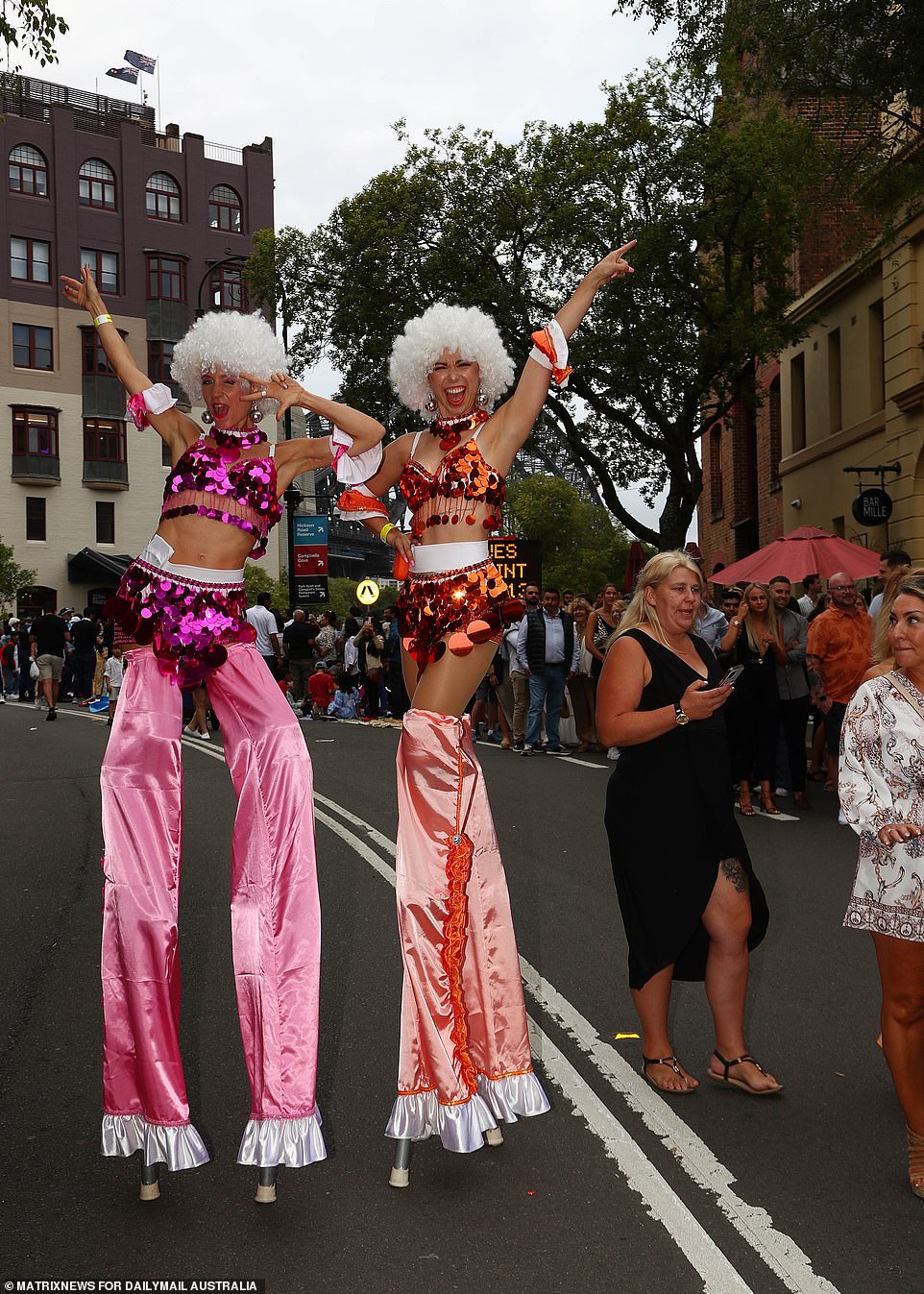 Life is too short not to have a good time: Stilt walkers join in on the celebrations at the Rocks in Sydney 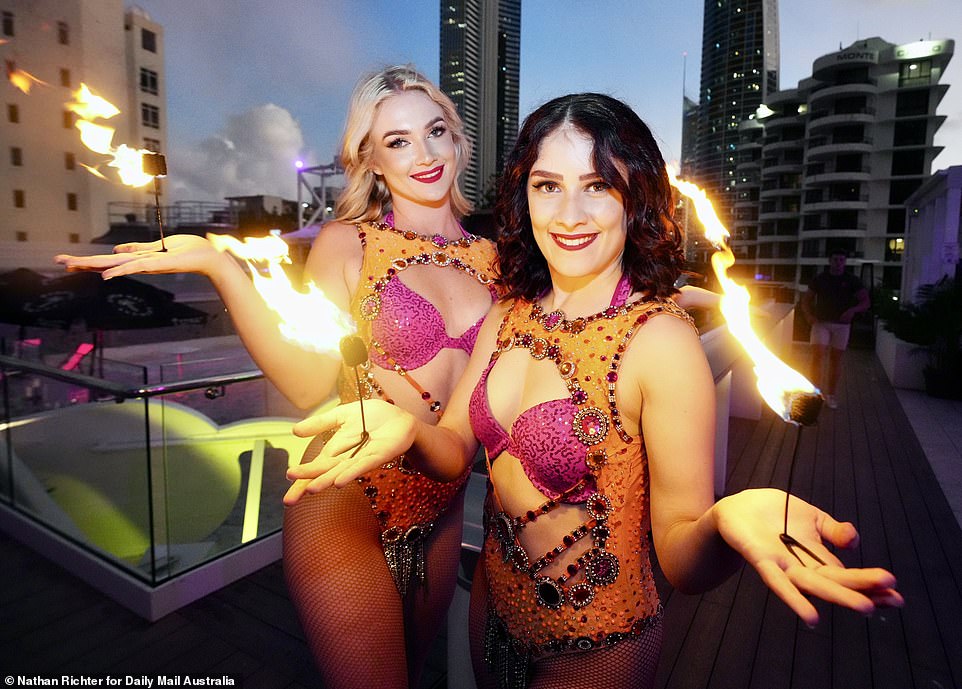 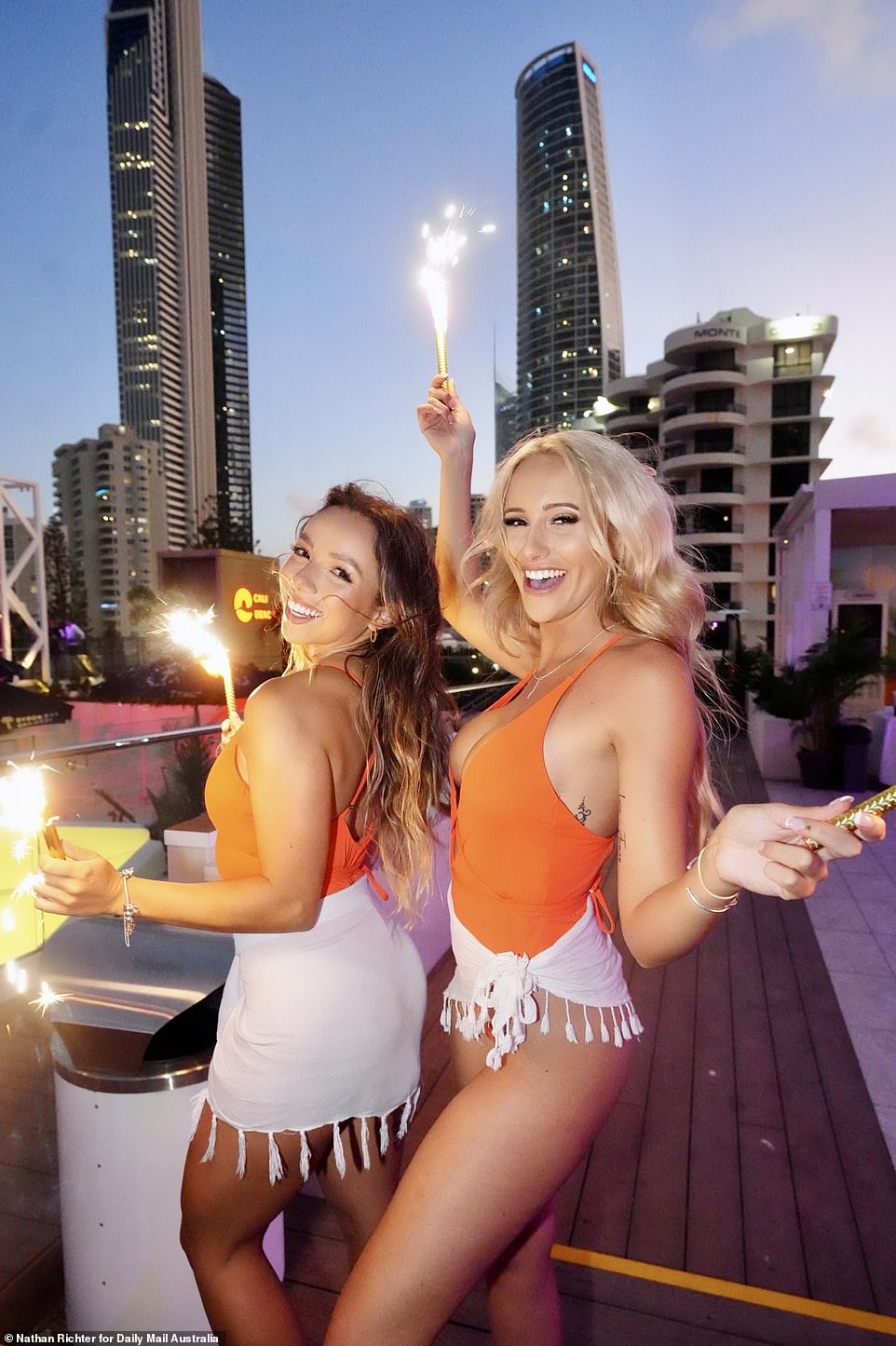 The Gold Coast also lit up with about 30 tonnes of fireworks at Coomera, Broadwater Parklands, Surfers Paradise, Broadbeach and Coolangatta 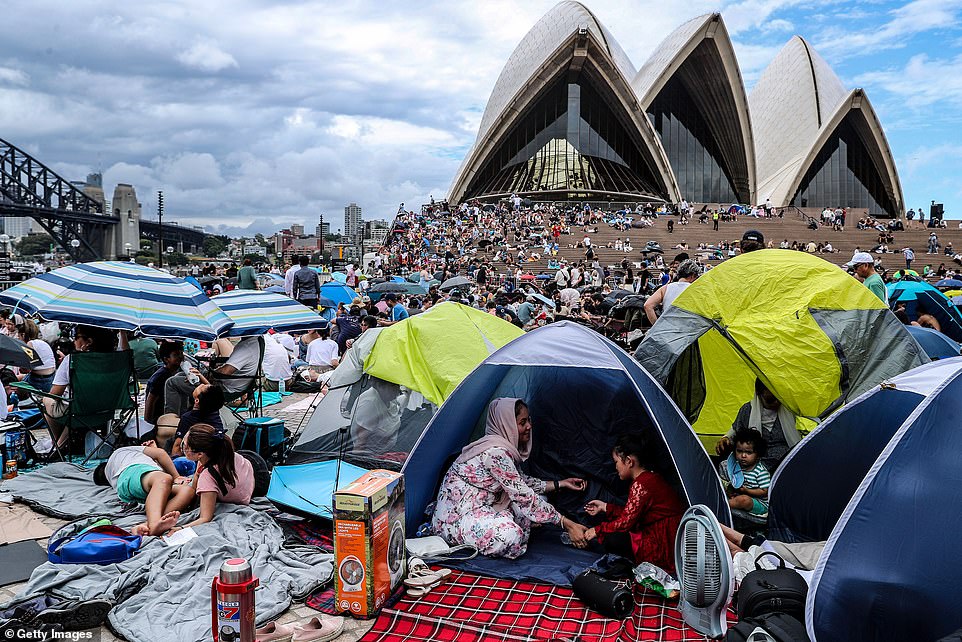 Thousands queued up throughout the afternoon in an to attempt to get onto the Sydney Opera House steps in search of the best seat in the house. Hundreds of thousands of people pitched their tents and settled in