Volkswagen has unleashed the most powerful road-going version of the Golf yet – and for the first time ever it comes with a ‘Drift’ mode.

The aggressively styled all-wheel-drive model – the most potent ever to wear the iconic Golf badge – produces 320 horsepower from a highly-strung 2.0-litre, four-cylinder, petrol engine and can accelerate from rest to 62mph in just 4.7 seconds and to a top speed of 167mph.

But it’s the inclusion of a drift mode that will likely cause the biggest stir – both among Golf fanatics and road safety groups – as when it’s activated it turns the family-friendly hatchback into a power-sliding hooligan.

VW’s new hooligan hatchback: This is the all-new Golf R, which packs a massive 320hp and – for the first time – features a ‘Drift’ mode

Linked to a slick seven-speed dual-clutch gearbox, the standard top speed for the new Golf R is 155mph. But that increases to 167mph with the addition of the optional R-Performance pack.

One of these is a Drift mode – taking a leaf out of the hit movie series Fast and Furious and copying the Ford Focus RS – that’s clearly aimed at those who like the thrill and excitement of controlled sliding.

When the driver presses the R-Performance button on the steering wheel, they can then activate the drifting setting in a sub-menu on the touchscreen in the dashboard.

‘In Drift profile, the parameters for the Electronic Stability Control and the distribution of power via the all-wheel drive system enable the Golf R to drift on private tracks,’ VW says.

It adds that the mode ‘opens up a whole new level of driving dynamics away from public roads and makes the experience behind the wheel even more fun’.

However, perhaps mindful that not all maverick drifters always stick to the rules – or to the track – and no doubt advised by their lawyers, VW notes: ‘To ensure the profile is only selected on private roads, the infotainment system always displays a confirmation prompt before it is activated.’ 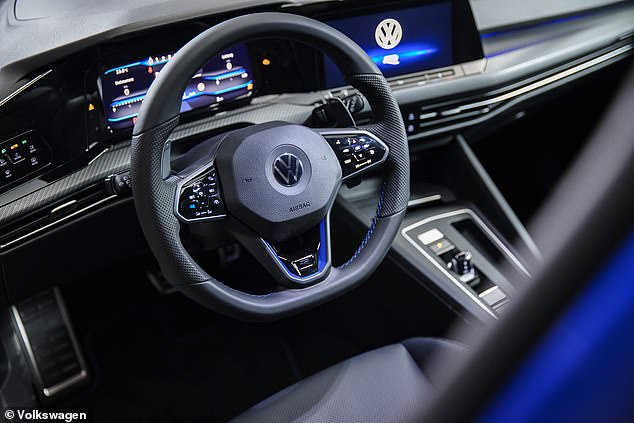 In Drift profile, the parameters for the Electronic Stability Control and the distribution of power via the all-wheel drive system enable the Golf R to drift on private tracks,’ VW says 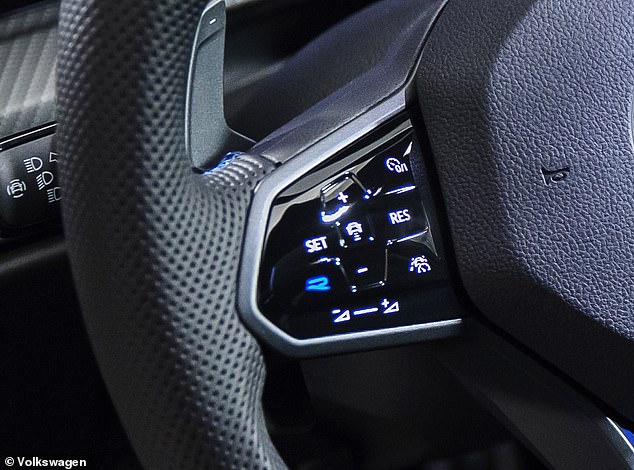 Drift mode is part of the R-Performance pack, which is activated using the blue ‘R’ button the steering wheel. To select Drift mode, you have to go into a sub-folder in the infotainment system 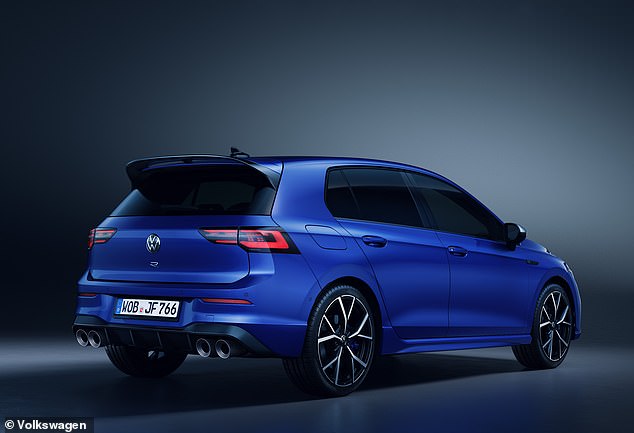 Road safety groups will question the safety credentials of a setting that promotes drifting and can be activated on public roads, despite a warning flashing up on the screen to only use it on private land or race tracks

While it recommends the mode should not be used on private roads, this statement suggests drivers can simply ignore the prompt and activate the setting on public highways.

When Ford first announced its Focus RS hot hatchback had a drift mode five years ago, road safety groups around the world questioned the inclusion of a setting that promoted potentially dangerous driving antics.

Stunt driver Ben Collins, formerly the white suited and helmeted professional driver behind ‘The Stig’ on BBC’s Top Gear, was reported as saying of the Ford RS that you can drive it ‘like a hooligan’ once in the special driving mode.

Harold Scruby, a road safety campaigner for the Pedestrian Council of Australia, told news.com.au in 2016 that he was ‘absolutely stunned’ that the mode had been approved.

‘A disclaimer is not going to stop an idiot from trying this on public roads,’ he said.

‘We urge Ford to reconsider its decision, recall these vehicles and disable this driving mode. Ford cannot absolve itself from its duty of care to road users and its customers with a disclaimer in the dashboard.’ 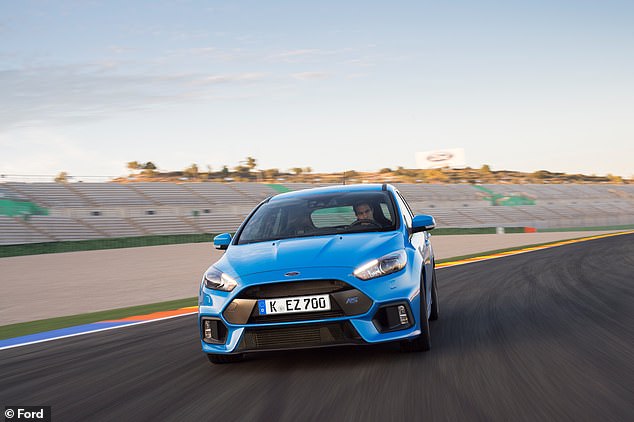 At the time, Ford issued the response: ‘Drift mode is targeted for track use only — a disclaimer appears on (the instrument) cluster when switching modes. We believe the drift and track modes are appropriate for racetracks, and that typical Focus RS customers will understand the need to deploy these features under controlled and safe conditions such as during a track day.’

VW’s inclusion of a similar mode for the all-new Golf R has rekindled concerns that some drivers may still use the option on public roads, especially given the recent examples of illegal drift meetings in the UK.

The second setting within the R-Performance pack is a new ‘Special’ mode that has been tuned on the infamous Nurburgring’s Nordschleife circuit where it helped cut 17 seconds off the lap time of the previous Golf-R (7 mins 53 sec as opposed to 8 mins 10 seconds).

Mindful of the propensity of some fast-moving performance cars to take to the air, VW says the set-up is tailored ‘to make sure the Golf R can maintain maximum contact with the road on the undulating Nordschleife’. And no doubt elsewhere too.

For those looking for a more relaxed ride – and travelling in a straight line – there’s also a ‘Comfort’ mode.

Completing the array of driving models are ‘Sport’ and ‘Individual’ profiles, with the latter allowing the driver to tweak a variety of settings to suit their personal preference. 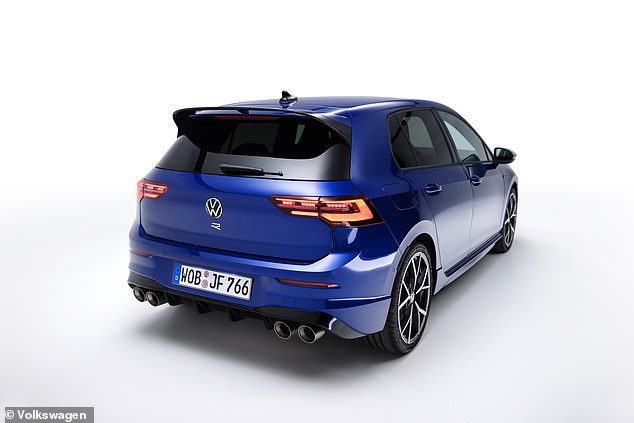 The Golf R looks ultra aggressive with flared arches, a bulkier bumper and a large spoiler 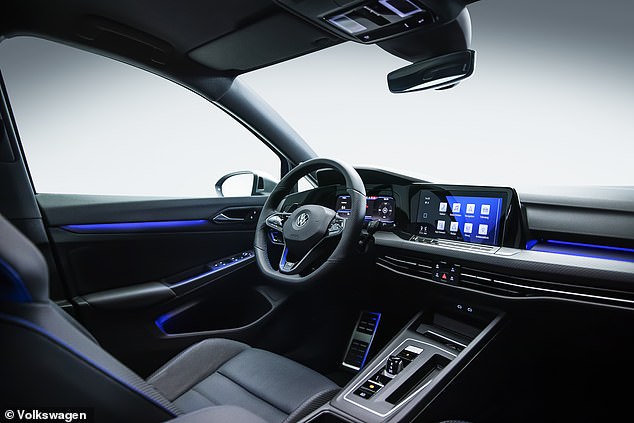 Inside, the blue tones tell it apart from the red-orientated Golf GTi, which sits below this car in the VW range

Away from driving modes and drifting, what else does the Golf R have to offer?

The new Golf-R rides on 18-inch wheels as standard with 19-inch versions as an option.

Powerful new brakes ensure it can also stop in time and ‘ensure superior deceleration from every speed range’.

VW says the new fifth-generation of the Golf-R’ car is the new ‘dynamic flagship model’ of the eighth generation Golf noting: ‘It is the most powerful of all Golf models.’

It says: ‘The R-Performance package also comes with a large rear spoiler that is open towards the roof (providing extra downforce on the rear axle) as well as 19-inch instead of 18-inch wheels and two additional driving profiles. Special (Nurburgring mode) and Drift’. 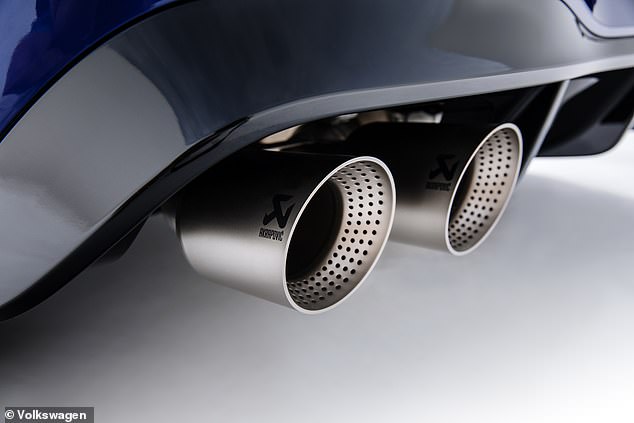 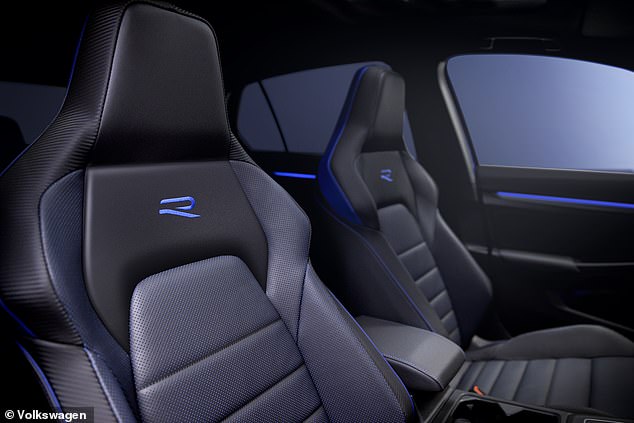 VW explains: ‘Here, a new rear axle drive distributes the drive power not just between the front and rear axles, but also between the two rear wheels. This makes it possible to significantly increase the agility of the Golf R, particularly when cornering.

‘As a world first, the all-wheel drive is also networked via a vehicle dynamics manager with other running gear systems – such as the electronic differential locks and adaptive chassis control.

‘Thanks to this close integration, the new Golf R offers optimum traction characteristics, neutral handling with the utmost level of precision, maximum agility and, last but not least, maximum driving pleasure.’

The car maker said: ‘Volkswagen will once again offer an optional seven kilograms lighter Akrapovic titanium exhaust system for the new Golf where the sound can also be controlled by the flaps.’

Inside, the driver has customised digital display screens with some specifically tailored Golf-R graphics, such as a central round rev counter.

The multi-function touch-sensitive leather sports steering wheel has ergonomically-shaped manual gear paddles that are larger than the standard model.

Some 35 million Volkswagen Golfs have been launched over eight generations since 1974 when the boxy hatchback succeeded the curvaceous Beetle.

More than 200,000 performance R models have been sold to date over five generations since 2002.