There were 5.2 million new claims for unemployment benefits filed last week, according to the latest Labor Department figures released on Thursday.

The staggering number of first-time claims was on top of the 16.8 million applications filed since the virus took hold in mid-March.

Economists say the unemployment rate could reach as high as 20 percent in April, which would be the highest rate since the Great Depression of the 1930s.

The latest figures mean about 13.5 percent of the workforce have filed for unemployment in four weeks.

In comparison, unemployment never topped 10 percent during the Great Recession between 2007 to 2009. The latest jobless claim figures show the coronavirus has now wiped out nearly 10 years of job growth since the Great Recession.

Unemployment from the coronavirus collectively constitute the largest and fastest string of job losses in records dating to 1948.

The real unemployment number is likely to be even higher because many states are still clearing out backlogs of unemployment claims after lengthy delays due to the influx of people filing online and via the phone.

There were 5.2 million new claims for unemployment benefits filed last week, according to the latest Labor Department figures released on Thursday

Initial claims for state unemployment benefits dropped 1.370 million to a seasonally adjusted 5.245 million for the week ending April 11, according to the figures.

Data for the prior week was revised to show 9,000 more applications received than previously reported, taking the tally for the ending April 4 to 6.615 million.

Economists are divided on whether the second straight weekly decline in claims suggests that filings peaked at a record 6.867 million in the week ending March 28, or that overwhelmed state employment offices were unable to process the flood of applications.

All businesses deemed nonessential have been closed in 48 states across the US as the economy has essentially shut down to stop the spread of coronavirus.

Layoffs are spreading beyond service industries like hotels, bars and restaurants, which absorbed the brunt of the initial job cuts, into white collar professional occupations, including software programmers, construction workers and sales people.

Up to 50 million jobs are vulnerable to coronavirus-related layoffs, economists say – about one-third of all positions in the United States. That figure is based on a calculation of jobs that are deemed non-essential by state and federal governments and that cannot be done from home.

It’s unlikely that all those workers will be laid off or file for unemployment benefits but suggests the extraordinary magnitude of unemployment that could result from the pandemic. 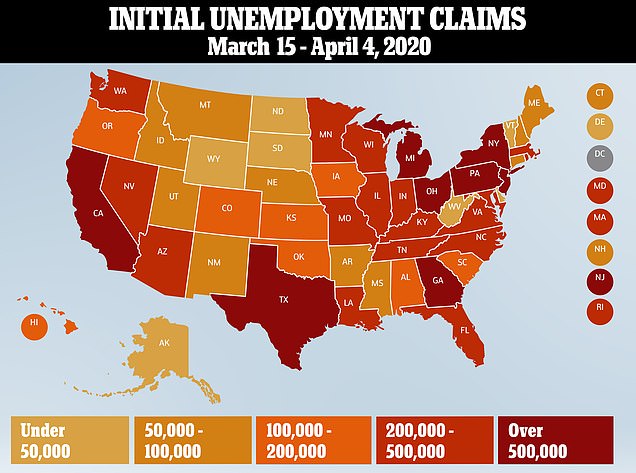 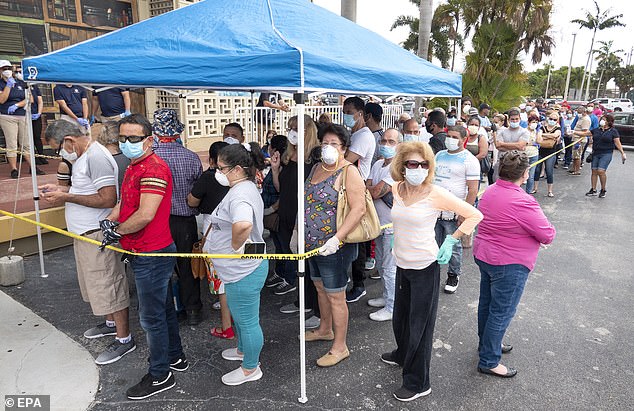 Last week, authorities in Miami, Florida handed out unemployment forms to people lining on foot and in cars after the website they were posted on crashed 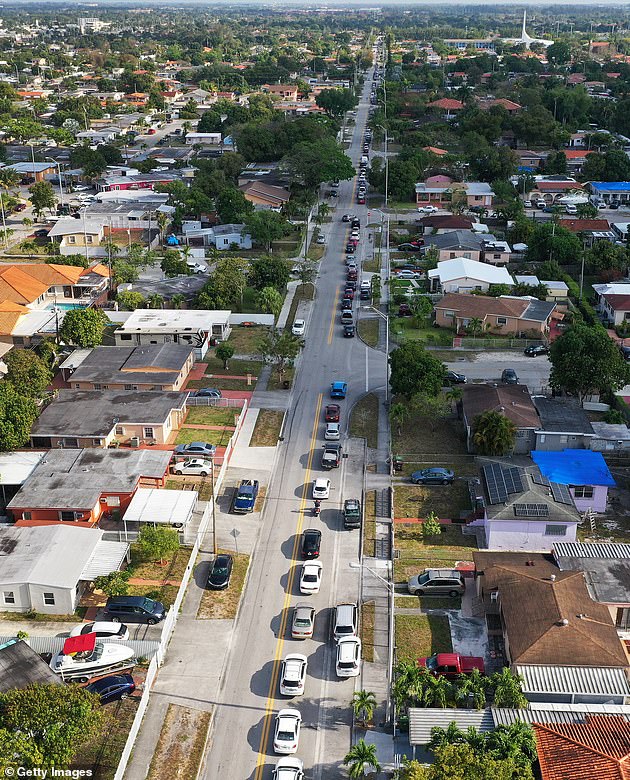 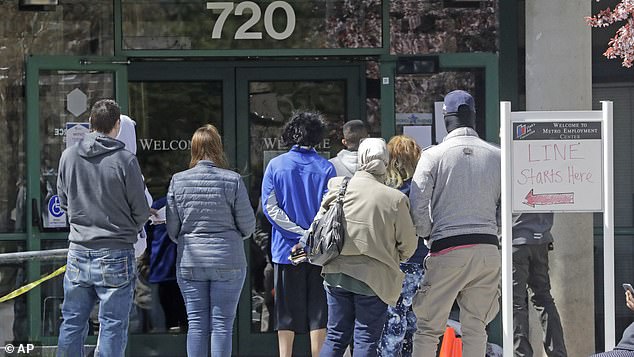 Weekly jobless claims, the most timely data on the economy’s health, are being closely watched for clues on the depth of the downturn, when the waves of layoffs may let up and when a recovery might start.

The surge of jobless claims continues to overwhelm state unemployment offices around the country.

Last week, authorities in Miami, Florida handed out unemployment forms to people lining on foot and in cars after the website they were posted on crashed.

Meanwhile, thousands of people have been lining up at food banks across the country as the jobless toll from the coronavirus continues to mount.

Cars lined for 1.5 miles outside a drive-thru food distribution site in Florida on Wednesday. Thousands more lined up in Los Angeles, San Antonio and Pittsburgh over the Easter weekend.

The latest unemployment benefits report followed dismal data on Wednesday showing a record drop in retail sales in March and the biggest decline in factory output since 1946.

Electronics chain Best Buy said this week that it will furlough 51,000 of its hourly employees, including nearly all its part-time workers. Royal Caribbean Cruises will cut one-quarter of its 5,000 corporate employees.

Job losses are now spreading well beyond occupations involving restaurants, retail, travel and entertainment, which were hit first and hardest.

The software company Toast, which works with the restaurant industry, last week cut half its workforce – or 1,300 people – citing a dizzying drop in restaurant sales. 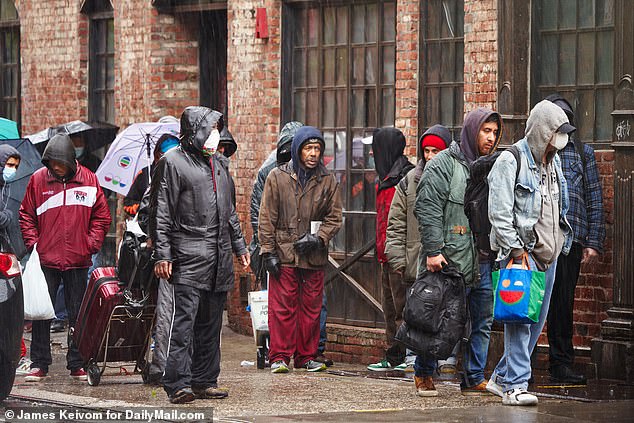 Thousands of people have been lining up at food banks across the country as the jobless toll from the coronavirus continues to mount. People are pictured waiting in line to receive lunch at the Bowery Mission in New York this week 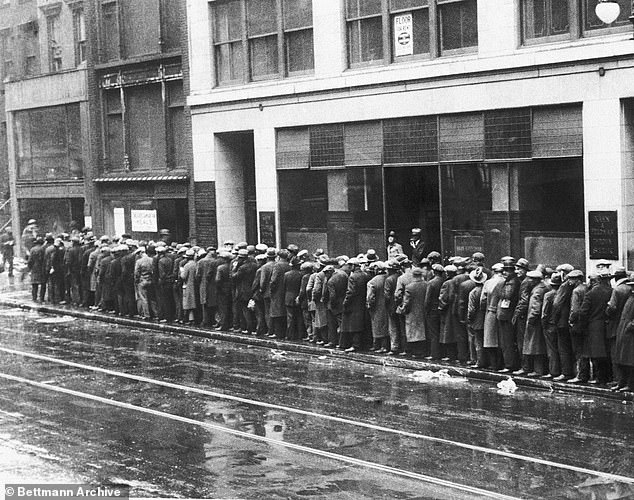 President Donald Trump will unveil his plan to reopen the country in a phone call with governors on Thursday afternoon – even as some of the nation’s top CEOs told him there needs to be more coronavirus testing before the economy can get going again.

The new guidelines are aimed at clearing the way for an easing of restrictions in areas with low transmission of the coronavirus, while keeping them in place in harder-hit places.

The ultimate decisions will remain with governors.

‘We’ll be opening some states much sooner than others,’ Trump said on Wednesday.

But in a round of calls with business leaders, Trump was warned that a dramatic increasing in testing and wider availability of protective equipment will be necessary for the safe restoration of their operations.

While the business leaders said they too wanted to get the economy going, they had worries about how to safely do so.

Health care officials have cautioned there could be a second wave of coronavirus cases if the country reopens too early.

The calls with CEOs were part of Trump’s Great American Economic Revival Industry Groups – a coalition put together by the White House as an advisory team on how the economy can recover from the devastation caused by the coronavirus.

The executives involved in the first call – which included leaders from banking, financial services, food and beverage, hospitality and retail industries – described current testing levels as inadequate to effectively reopen the economy.

Trump has staked his re-election on a strong US economy and has repeatedly complained the coronavirus interrupted ‘the greatest economy’ ever.

Trump originally wanted to reopen the country by Easter Sunday, a date he was moved back from by health care officials.

He has now focused on May 1 and appears committed to that date, although he has tempered it by saying different areas of the country will open at different times.

Some states have already extended stay-at-home orders beyond May 1. In Virginia, Governor Ralph Northam announced Wednesday he was extending his executive order that puts restrictions on businesses for two more weeks – until May 8.

Trump will kick off his effort to reopen America on Thursday with a 3pm call with the nation’s governors.