A 400km rainbomb is drenching the east coast with thunderstorms and strong winds sparking severe weather warnings across NSW and cancelling the Bathurst Shootout for the first time in history.

It comes after emergency services performed six rescues in NSW in the past 24 hours as heavy rain continues to bombard the state and widespread flooding continues threatening landslides and flash floods.

Conditions are expected to intensify until midnight as the weather system causing the downpour moves from west to east.

Saturday’s Top 10 Bathurst Shootout was abandoned for the first time since 1978 because of unsafe track conditions caused by the torrential rain at Mount Panorama.

And the F3 A-League soccer derby between Central Coast Mariners and Newcastle Jets was also axed after the Gosford stadium was turned into a swimming pool by the downpour.

Strong winds and rainfall will continue to buffet the east coast of Australia, weather experts have warned (above, total rainfall forecast for the two days of the weekend)

Motorsport Australia officials spent over an hour deliberating whether to let the top 10 drivers from Friday’s first qualifying session take to the track to decide their starting order for Sunday’s race.

But it was deemed unsafe after the final Super2 and Toyota 86 series races were also canned, with rivers of water running on the track at times.

Aussie motor racing driver Cam Waters said he was disappointed to see the shootout cancelled but would prefer to see the full field out for Sunday’s race, rather than have cars wrecked in the hazardous conditions.

‘The rain was crazy and you saw the rivers and everything going on. It was going to be a bit of a safety thing,’ he told Fox Sports.

‘As soon as you hit a river you aquaplane, you’ve got no control over the car and you don’t want to be writing cars off the day before the big race.

‘I’m disappointed but I think officials have made the right call.’ 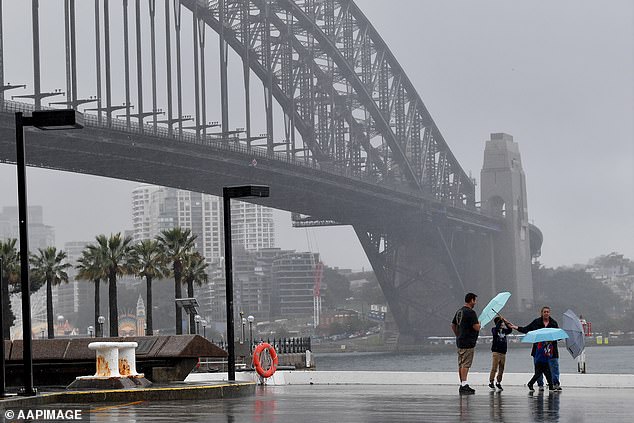 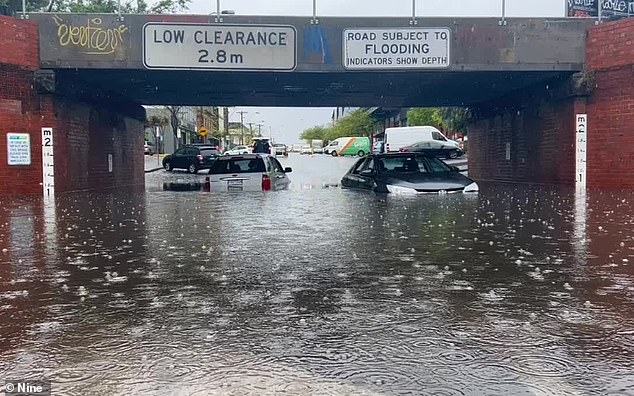 Much of Victoria and Queensland will also be in the firing line, with state emergency services cautioning against unnecessary travel (pictured, flooded roads in Melbourne on Friday)

Up to 100mm was expected to fall on the tens of thousands of attendees, potentially leading to flooding along the Macquarie River in Bathurst.

Free sandbags are available in the town, while volunteers are checking in with residents and tourists camping near the river.

NSW Premier Dominic Perrottet urged people to stay safe, be cautious on the roads and avoid driving through flood waters.

‘Don’t put your life at risk, your family at risk or our volunteers at risk,’ he said. 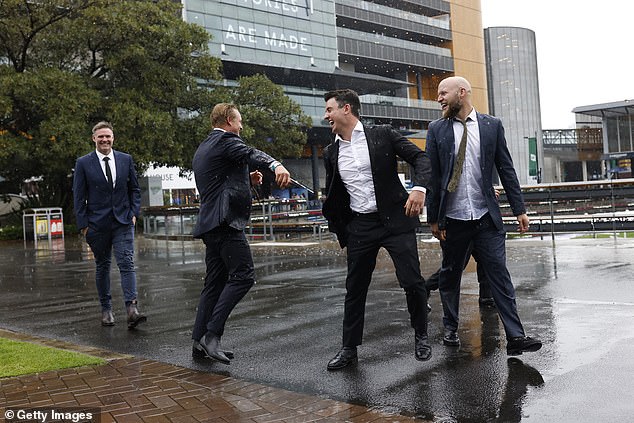 ‘The good news is this system is moving through pretty quickly and we should have a couple of days of reprieve,’ the Bureau of Meteorology’s Jane Golding said (pictured, racetrack attendees leave the racecourse after the races were postponed on Saturday)

The Bureau of Meteorology’s Jane Golding said the rain would intensify throughout Saturday into early Sunday east of the Great Dividing Range.

It will begin easing by midday, with some sunshine forecast for the start of the week.

‘The good news is this system is moving through pretty quickly and we should have a couple of days of reprieve,’ Ms Golding said.

In Sydney and inland New South Wales, drenched dams and water catchments will be tested by the intense downpour over the weekend, after Sydney surpassed its wettest year on record this week.

Much of Victoria and Queensland will also be in the firing line, with state emergency services cautioning against unnecessary travel.

Heavy downpours cut off roads in Melbourne on Friday with the SES receiving more than 300 calls for help across Victoria.

There are 63 flood warnings in place and residents across NSW, including in Sydney, are being asked to stay across their local situations as rivers swell.

Four defence helicopters will come online from 6pm on Saturday in response to a request for extra help from the NSW State Emergency Service. 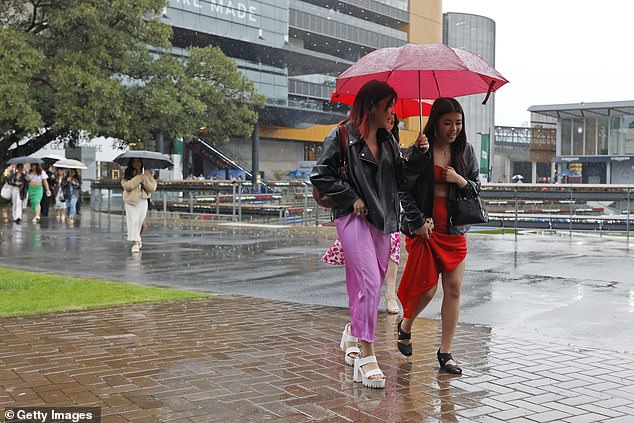 The rain is forecasted to  intensify throughout Saturday into early Sunday east of the Great Dividing Range (pictured, racegoers leave the track on Saturday after races were postponed because of the rain at Royal Randwick Racecourse)

The agency has received 330 calls for help in the past 24 hours.

After a soggy week in NSW, heavy falls on already saturated grounds would heighten the risk of landslides and debris falling across roads.

Parts of NSW have seen up to 100 millimetres of rain so far, with full dams and saturated catchments meaning rivers are prone to flash flooding.

Major flooding is occurring on the Macquarie, Darling, Culgoa and Lachlan rivers, a risk of inundation is current for multiple inland catchments.

Damaging winds are also likely across Sydney and along the Illawarra coast into Sunday, with peak gusts of more than 90km/h.

The system is expected to blanket the state throughout the weekend, with widespread showers forecast from top to bottom.

As flood peaks move down already swollen rivers around the state, the BoM has warned of renewed risks for the Gwydir, Namoi, Macquarie and Belubula rivers, Mandagery Creek, the Lachlan and Bogan rivers, Colo River, Wollombi Brook and Lower Hunter River.

‘It is important to remember that the rains will pass and the sun will come out, but the rivers may still be rising,’ she said.

Six hourly rainfall totals of 30-50 millimetres are predicted in the Central Tablelands, the Hunter region and metropolitan Sydney, with isolated areas expected to receive up to 70mm.

While the worst of the weather is forecast for Sydney, the Hunter region and the Central Tablelands, other areas can also expect rain. 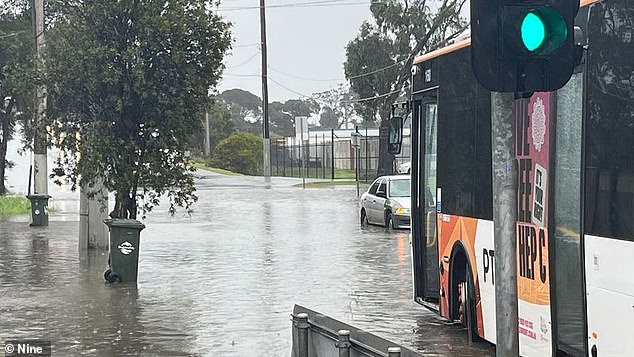 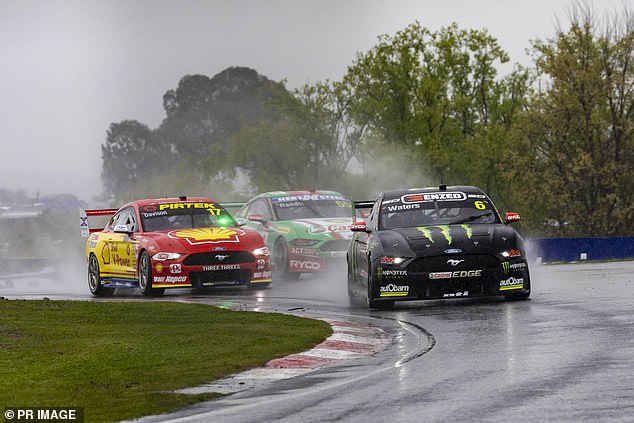 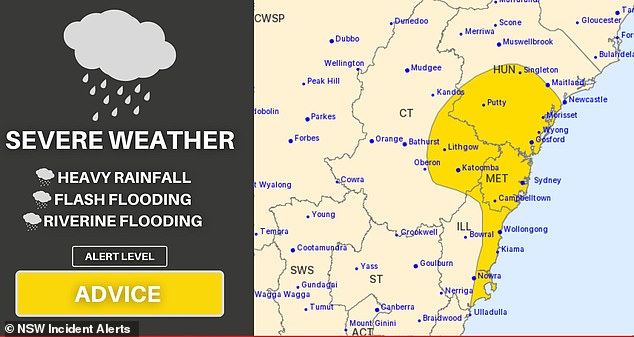 State emergency operations controller Peter Cotter asked that the community work with emergency services and follow any directions they were given.

‘Those in flood-prone areas are urged to avoid essential travel and drive to the conditions on the roads,’ he said.

Victoria SES asked Victorians to prepare for the impacts of flooding.

‘Being well-prepared can reduce the impacts of flooding by up to 80%.’

‘VICSES volunteers also ask Victorians to avoid flooded roads, and to avoid driving during heavy downpours. Floodwater rescues put our volunteers at risk let alone the dangers to those in the vehicle.’