ESG investing has faced intensified scrutiny in recent months, but investors have continued to engage with climate issues during this year’s AGM season, according to a report by DF King.

ESG investment, which focuses on environmental, social and governmental concerns, has been under the regulatory microscope amid a crackdown on claims of ‘greenwashing’.

Market attention has also turned to more urgent themes like the cost of living crisis and looming recession, while volatility in the last year has hit many ESG-associated stocks hard.

The Financial Conduct Authority (FCA) recently announced plans to introduce new rules aimed at cracking down on ‘greenwashing’ in investment funds, including new restrictions on the use of the term ESG.

‘As we look back at 2022 and contemplate the ESG landscape for 2023, one may be tempted to believe that the ESG movement has plateaued, at least momentarily,’ said David Chase Lopes, managing director, EMEA at DF King.

‘If generally in the UK and Europe there has been a confirmation of the stakeholder model, the ESG movement that drove the evolution from a shareholder to a stakeholder one has experienced real growing pains in 2022.’

The report by DF King, which analyses voting results published by issuers across Europe, finds that climate change and diversity continue to be important topics for investors.

France retains its crown as the market with the highest participation levels for the second year running at 74 per cent, followed closely by the UK, though this is slightly below pre-pandemic levels.

The resolutions tabled in the 2022 AGM season have mainly been targeted towards high greenhouse gas emitting sectors like energy, mining and industrials, as well as companies that finance these sectors. 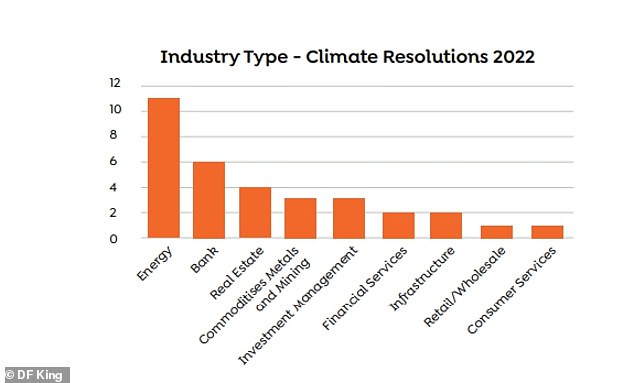 The composition of the FTSE 100, which has a strong tilt towards the likes of energy, banking and mining, goes a long way in explaining the number of climate-related proposals in the UK.

The usual topics up for discussion were supplemented by Russia’s invasion of Ukraine and the subsequent fallout in energy markets and broader inflation. But DF King’s report found topics that came to the forefront during the pandemic have begun to resurface.

DF King found there has continued to be ‘growing demands from investors for improved general transparency’, particularly in regards to remuneration.

Support for remuneration-related proposals in the FTSE has been surprisingly consistent and average approvals are now back above the 90 per cent mark.

Not all companies have been able to sustain this support. Informa suffered the biggest UK shareholder revolt on pay in more than a decade with only 28 per cent of shareholders supporting the rejected remuneration report. No other reports were rejected.

Lopes said: ‘In the end, the 2022 AGM season was another year underpinned by issuers and investors lobbying hard to find common ground on key ESG topics. Both sides continue to improve but may need to reassess their scopes and methods to continue to progress in the interest of shareholders and stakeholders alike.

‘Getting AGM transparency right in 2023 would help issuers illustrate why and how their current boards remain fit-for-purpose at a time where they need to address diverse, important and sometimes contradictory challenges related to the remains of the pandemic, inflation, climate, conflict and societal pressures’.