The wait is finally over for Star Wars fans eager to ride Disney’s Rise of the Resistance attraction – because it opens tomorrow at Star Wars: Galaxy’s Edge in Florida.

And never-before-seen images and video footage reveal more of the excitement in store.

The attraction will see riders join the Resistance in a climactic battle with the First Order, which will include a face-off with Kylo Ren in what Disney describes as the most ambitious, technologically advanced and immersive experience in its history.

Disney’s Rise of the Resistance attraction opens tomorrow at Star Wars: Galaxy’s Edge in Florida. Fifty menacing First Order Stormtroopers await guests as they arrive in the hangar bay of a Star Destroyer as part of the ride 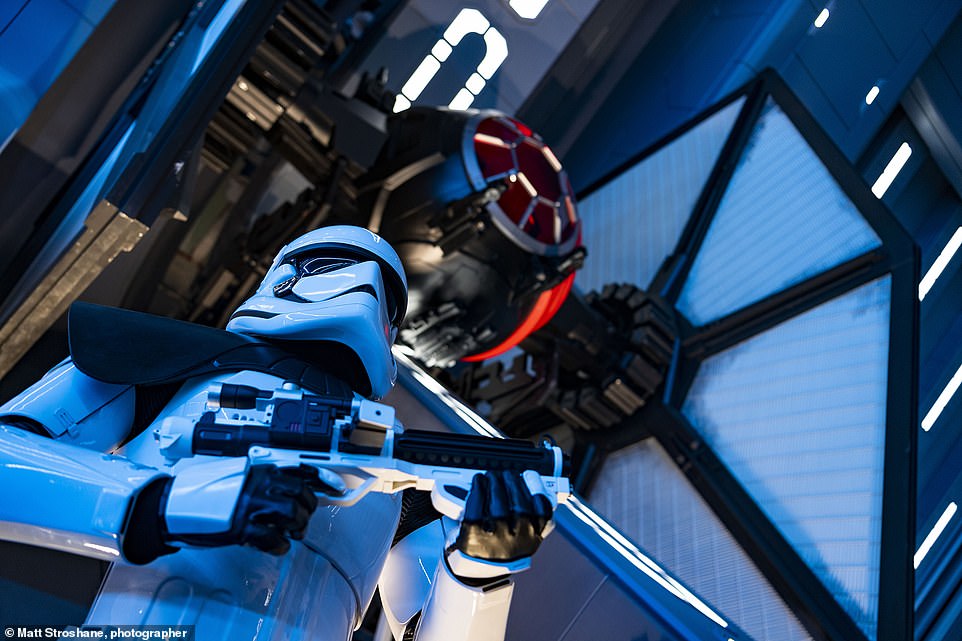 A First Order Stormtrooper stands guard in a Star Destroyer hangar bay beneath a docked Tie fighter. Guests enter the hangar bay after their ship is caught in the Star Destroyer’s tractor beam

The ride, which opens at midnight, starts with guests finding the Resistance’s temporary encampment in the forested area along the outskirts of Black Spire Outpost on Batuu.

The gateway to the encampment is marked by a large turret and from there a pathway leads deeper into the forest towards towering cliffs and the crumbling remains of an ancient civilization.

Guests weave through low stone walls, timeworn pillars and tight corridors as they progress further into the base, with military communications chattering along the way.

In a makeshift briefing room, Rey appears via holo-transmission alongside droid BB-8 to welcome the ‘new Resistance recruits’. She shares a plan to reunite with General Leia Organa at an off-planet location that must be kept secret from the First Order.

Guests then board a nearby Intersystem Transport Ship (I-TS) and have to make their rendezvous quickly to avoid a First Order Star Destroyer.

Disney says that Rise of the Resistance ‘throws out the rulebook for traditional attraction design, eschewing and/or blending industry notions such as “queue”, “preshow” and “ride” to create a seamless, holistic experience full of rich details and breath-taking excitement on a cinematic scale’. 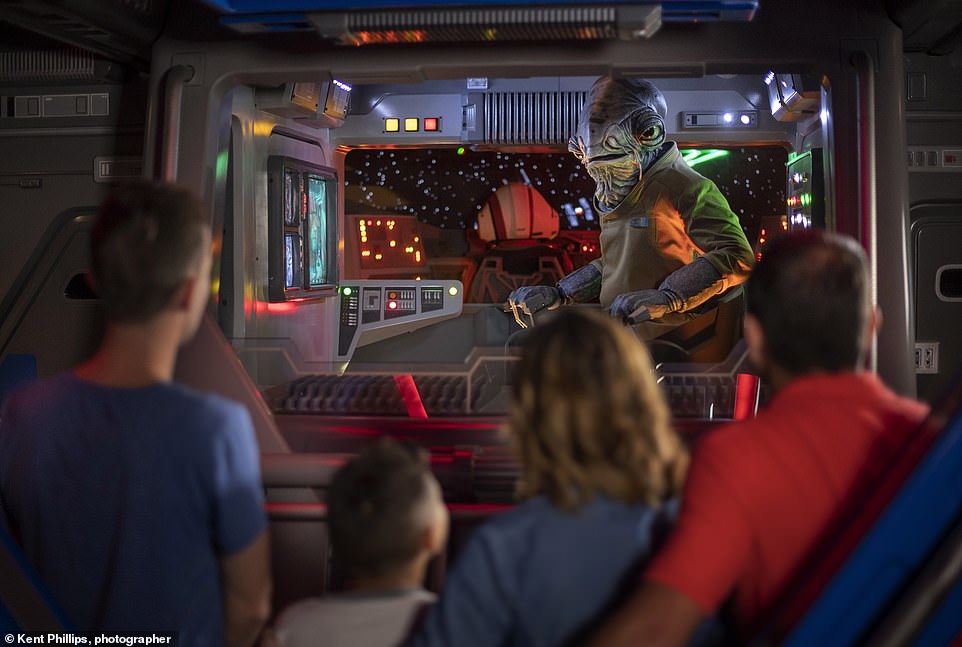 Lieutenant Bek, a Mon Calamari Resistance officer, speaks with guests aboard an Intersystem Transport Ship as they blast off Batuu in the new groundbreaking ride 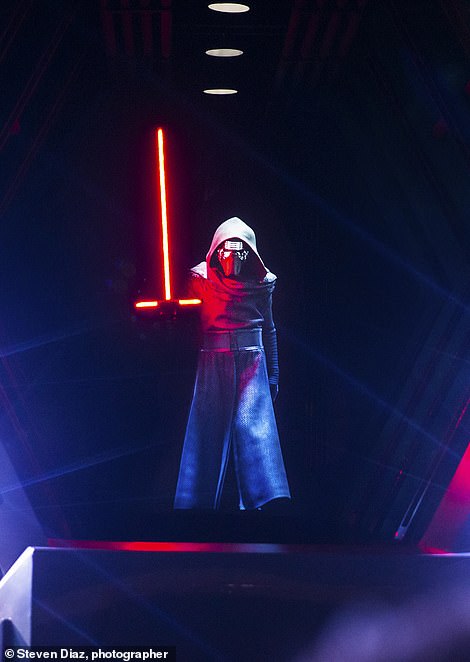 It adds that when guests board the I-TS, they’ll feel as if they’re lifting off the surface of Batuu and blasting into space alongside Poe Dameron in his signature black-painted X-wing starfighter, Black One.

However, Disney says that before the I-TS can make the jump to lightspeed, it’s caught in the tractor beam of a Star Destroyer and pulled into a massive hangar bay.

The attraction features grand set pieces – including the hangar bay that is filled with 50 menacing stormtroopers and a docked Tie fighter.

Throughout their journey, riders are hunted by Kylo Ren, who uses the Force in an ‘attempt to pry from their minds the location of General Organa’s secret base’.

The ride also features appearances from actors from the current Star Wars film trilogy, who reprise their roles for new scenes and dialogue in the ride.

Walt Disney Imagineering says it worked hand in hand with Lucasfilm in writing the attraction’s script, which ‘ensures the characters and storylines were properly integrated into the broader Star Wars galaxy’. 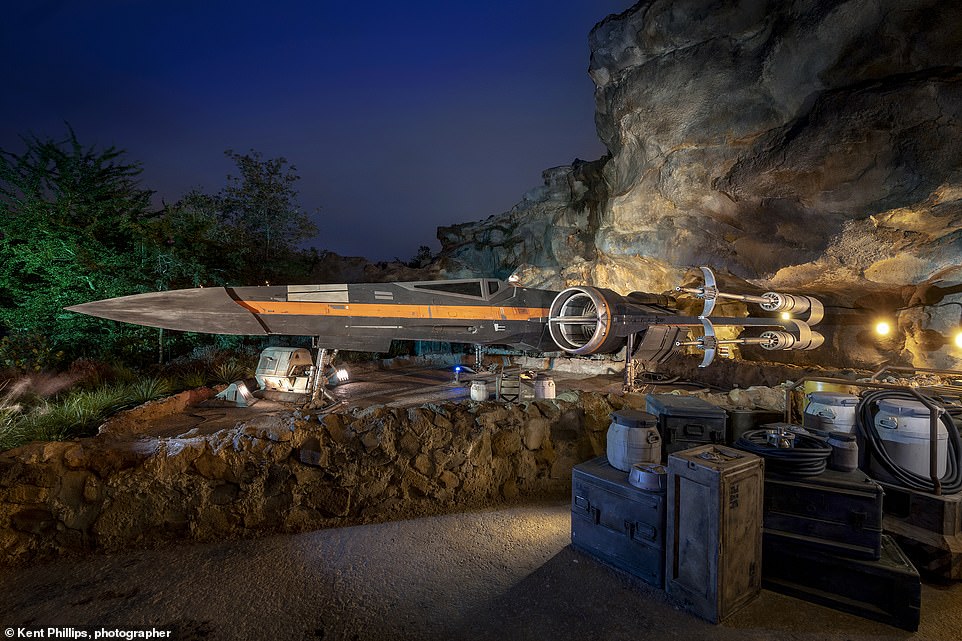 Poe Dameron’s X-wing starfighter, Black One. Poe escorts guests off Batuu as they attempt to rendezvous with General Leia Organa in Rise of the Resistance

Among the cutting-edge technology used in Ride of the Resistance is a new simulator experience that gives the sensation of falling from space to crash-land on Batuu.

In addition, the trackless ride vehicles used in the attraction are some of the most advanced ever used in a Disney attraction, with a ‘sleek, low profile and the ability to move in all directions’.

The same ride is set to open at Star Wars: Galaxy’s Edge at Disneyland Resort in California on January 17, 2020. 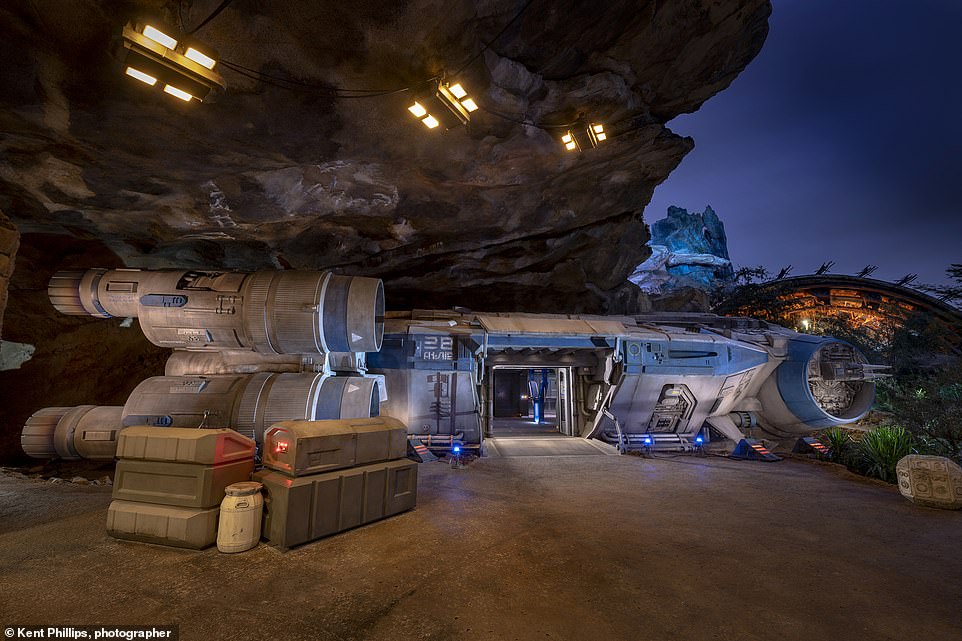 The Intersystem Transport Ship (I-TS) that guests board to blast off Batuu. Disney says that when guests board the I-TS, they’ll feel as if they’re lifting off the surface of Batuu and blasting into space

‘We threw out the rulebook when designing this attraction to deliver experiential storytelling on a massive, cinematic scale.

‘Star Wars: Rise of the Resistance sets a new standard for what a theme park experience can be – just like Galaxy’s Edge, itself.

‘None of this would be possible without the incredible teams at Walt Disney Imagineering, Disneyland and Walt Disney World, who brought not one, but two award-winning lands to life at the same time.’