The draconian new restrictions imposed last night were drawn up after the number of people carrying the coronavirus more than trebled in a week.

The rapid rise in areas which were last night plunged into new tier 4 measures is said to be down to a new virus strain, which was first announced on Monday.

The restrictions will apply in London, Kent, Essex, Buckinghamshire, Berkshire, Surrey, Gosport, Havant, Portsmouth, Rother and Hastings, all of which were previously in tier 3.

Epidemiologist John Edmunds, a member of the Government’s Scientific Advisory Group for Emergencies (Sage) said: ‘This is the worst moment of the epidemic because of the extraordinary infectivity of the new strain.’

He added: ‘This strain has been increasing exponentially during the lockdown and during the tier 3 restrictions that Kent and other parts of the South East have been under.

‘Although the lockdown was enough to bring cases down elsewhere, it was not enough to stop this strain from spreading rapidly. We will need much more severe measures to bring the incidence down.

‘Worse than that, we are starting from a very high incidence already with hospitals stretched and NHS staff under strain. It is a very perilous situation.’

Analysis show that the worst-hit area was Rochford, Essex, where the number of cases increased by 207 per cent, from 180 to 533 in a week. Elsewhere in Essex, Castle Point saw a 183 per cent increase, from 182 cases to 516, and Epping Forest recorded a spike of 140 per cent.

Infections in some London boroughs have increased by nearly 150 per cent.

The number of people in Kent catching the virus has also soared. There was a 118 per cent increase in Sevenoaks, with 942 cases, up from 431, while Swale has the most cases in the county with 1,127.

Big increases have been recorded in commuter-belt towns such as Woking in Surrey with 327 infections recorded up to December 14. 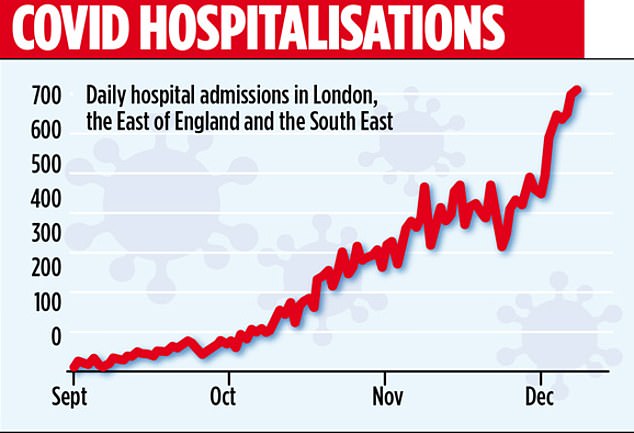 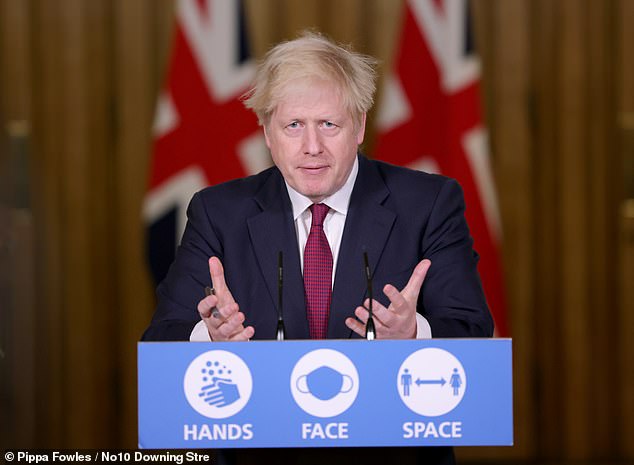 The rapid rise in areas which were last night plunged into new tier 4 measures is said to be down to a new virus strain, which was first announced on Monday

Mole Valley, which lies at the heart of Surrey, mid-way between London and the Sussex coast, more than doubled its figures from 70 to 177 cases, and Reigate and Banstead saw a 132 per cent increase.

Professor Chris Whitty told a Downing Street briefing yesterday that there had been a ‘really dramatic’ increase in the proportion of cases seen with the new variant.

Screening tests suggest that in the South East of England, 43 per cent of the virus was now the new variant, in the East it was 59 per cent and in London 62 per cent. The new strain is thought to have spread along a corridor from Kent to London, before seeding in the capital and then spreading to the Home Counties via commuter routes. The Office for National Statistics estimated that 567,300 people had Covid last week, up from 481,500 seven days earlier.

Tracey Crouch, Tory MP for Chatham and Aylesford in Kent, responded to the latest surge by tweeting: ‘I feel quite down (personally & professionally) about tougher restrictions… but I also understand why this has happened.

‘Our local hospitals have reached capacity, the virus and its new variant is rife in our community. Focus must be on vaccine rollout.’

Tudor Price, deputy chief of Kent Invicta Chamber of Commerce, said the new restrictions for the county were ‘disappointing but not surprising’. He said: ‘It’s the worst of all possible situations from a business point of view but understandable from a public health point of view. I am extremely empathetic towards those businesses that now have to close.’

Conservative MP Sir Roger Gale, whose constituency North Thanet is also in Kent, said: ‘It is very hard but if we are to enjoy Christmas and at the same time stay safe, it is vital that everyone sticks to the restrictions that have been announced this afternoon.

‘The alternative will be a truly dangerous and terrible start to 2021.’