The UK’s new car market recorded a third successive month of growth in October but experts warn that rising inflation and economic stagnation is set to derail the sector’s recovery from the pandemic.

Some 134,344 new cars were registered in October, up 26.4 per cent compared with the same month last year, with Ford’s Fiesta returning to the top of the sales charts, according to the latest figures published by Society of Motor Manufacturers and Traders (SMMT).

The trade body attributed the increase to ‘strong order books’ being partly fulfilled, with Britons having to endure long waiting times – some up to a year – for their new vehicles to arrive as a result of supply shortages.

However, industry insiders have warned that rising inflation impacting the value of finance deals, higher mortgage rates, soaring energy bills, and both fuel and food becoming increasingly expensive, is set to put a stranglehold on car sales into 2023 and possibly beyond.

Farewell Fiesta: Some 134,344 new cars were registered in October with Ford’s Fiesta returning to the top of the sales charts in the month it was confirmed it is being axed next year

The SMMT caveated last month’s rise in registrations by acknowledging that October’s results are being compared to a ‘particularly disappointing’ October 2021.

The total number of new cars registered so far this year is a third below pre-coronavirus levels, which is mostly a result of low availability of vehicles caused by parts supply shortages, especially with regard to semiconductor chips.

Ford’s Fiesta returned to the top of the sales charts in the month the car-making giant confirmed that the hugely popular model will be axed in June 2023, ending 47 years of continuous production of the supermini. 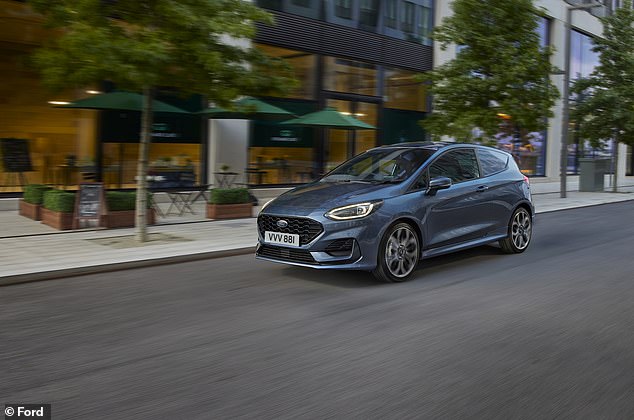 Ford confirmed last month that it will stop making the Fiesta in June 2023, ending 47 years of continuous production

The Nissan Qashqai was the second most-bought new car last month, meaning it has leapfrogged the Vauxhall Corsa at the top of the 2022 sales charts 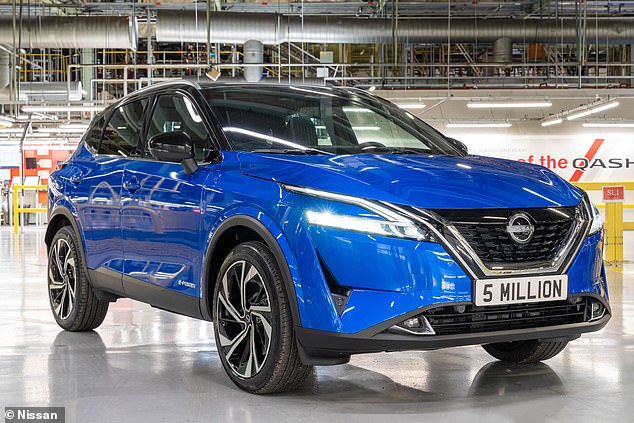 The popularity of the Nissan Qashqai is great news for the North East, with the SUV built at the Japanese manufacturer’s factory in Sunderland

The 4,230 Fiestas bought in October will add to the more than 1.5 million already on Britain’s roads, with the little Ford the most-owned car in the country.

Second in the sales charts was the Sunderland-built Nissan Qashqai SUV, with 4,228 sales.

It has now overtaken the Vauxhall Corsa as the most-bought new car in Britain in 2022, in a welcome boost for the North East.

SMMT chief executive Mike Hawes said that October’s results are ‘hugely welcome’ but it is ‘still not enough to offset the damage done by the pandemic and subsequent supply shortages’.

He remained upbeat on the demand for electric cars, which he said could help see the market though the predicted turbulent 12 to 18 months ahead, with the cost of living crunch set to tighten consumer spending.

However, he warned this could only be achieved with an expansive and reliable charging infrastructure in place.

‘Next year’s outlook shows recovery is possible and EV (electric vehicle) growth looks set to continue, but to achieve our shared net-zero goals, that growth must accelerate and consumers given every reason to invest,’ he said.

‘This means giving them the economic stability and confidence to make the switch, safe in the knowledge they will be able to charge – and charge affordably – when needed.

‘The models are there, with more still to come; so must the public chargepoints.’ 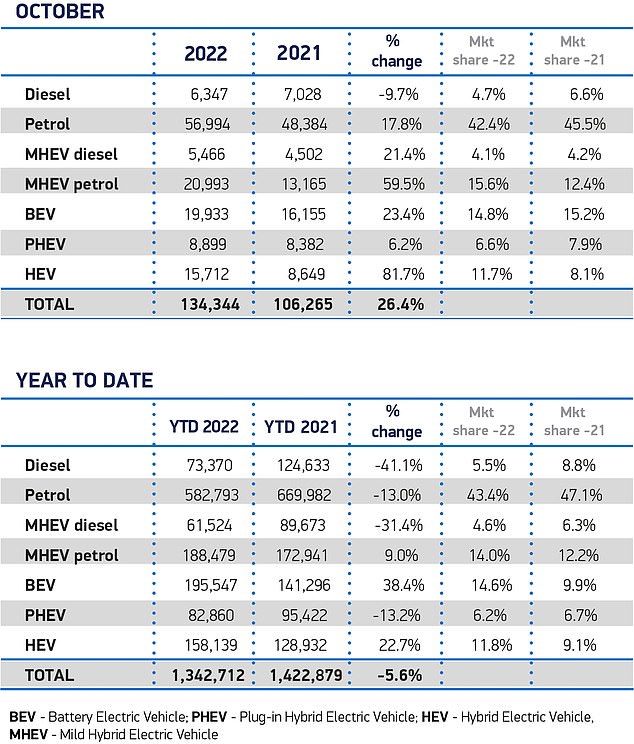 Ginny Buckley, founder of website Elecrtrifying.com, said people shouldn’t read too much into October’s EV sales stats as registrations of battery cars are massively impacted by the timing of shipments to the UK from big-selling brands such as Tesla, Kia and MG

Registrations of pure battery electric new cars grew by less than the overall market for the first time since the pandemic, up 23.4 per cent,

The year-on-year market share of the cars fell for the first time since May last year, from 15.2 per cent to 14.8 per cent.

Ginny Buckley, an electric car expert and founder of website Elecrtrifying.com, said people shouldn’t read too much into October’s stats: ‘Electric car registrations are massively impacted by the timing of shipments to the UK from big-selling brands such as Tesla, Kia and MG.

‘We know that large numbers of electric cars are due to arrive in the UK over the next two months and will be sent straight out to eager buyers.’

He added: ‘The economic climate is moving away from the direction the industry needs it to, and this is becoming increasingly problematic for manufacturers that are having to invest in new electric vehicle plants and grow their electric vehicle line-up to meet Government-imposed targets.

‘Though electric vehicle sales continue to grow, rising energy prices and cost of living is making it harder for some to make the switch.’

Chris Evans, head of sales at Heycar adds that rising interest rates and the highest mortgage rates that we’ve seen in 14 years are making consumers ‘far more cautious’ when it comes to their next big purchase.’ 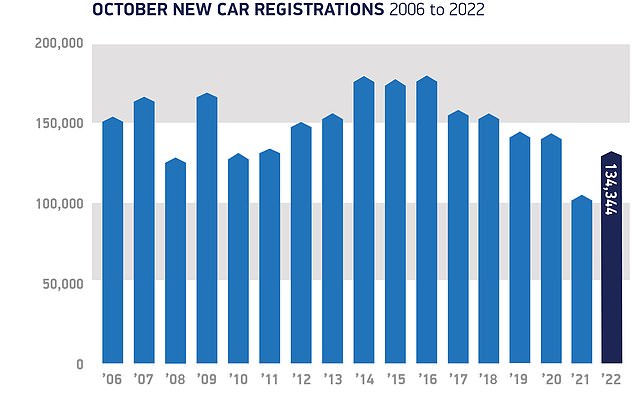 Jamie Hamilton, Deloitte’s car market analyst, adds that he has tracked a decline in appetite for cars already.

‘The SMMT figures come at a time of rising interest rates – the base rate reaching 3 per cent just this week – making the cost of financing a new car more expensive, and could soften demand as many consumers delay major purchases.

‘This also comes as manufacturers start to emerge from the microchip shortage and supply chain issues.

‘According to the Deloitte Consumer Tracker, just 4 per cent of consumers plan to purchase a car between now and the end of the year.’

‘In some areas it is becoming apparent that stock is clearly taking longer to be sold, with dealers advising of strong pricing actions being required.’

‘Major demand headwinds are building for households and businesses and the latest assessments of UK economic growth prospects are bleak,’ he told This is Money.

‘GlobalData forecasts that the UK car market this year will struggle to reach 1.6 million, with just 1.7 million new car sales projected for 2023.

‘I’m afraid a weak recovery for the sector is in prospect with very tough trading conditions in prospect for at least the next 18 months.’