Researchers in the US have created a new class of antibiotics that can kill even the most chemical-resistant bacteria, in what they describe as a ‘potential landmark’.

If commercialised, hospital patients infected with ultra-strong, highly-evolved ‘superbugs’ could take the drugs – called dual-acting immuno-antibiotics (DAIAs) – in the form of a pill to clear a bacterial infection.

DAIAs tackle the huge ongoing problem of antimicrobial resistance (AMR) – when bacteria and other microbes adapt and evolve in response to modern chemicals designed to kill them, becoming ultra-strong ‘superbugs’.

DAIAs work by targeting a metabolic pathway in bacteria that most of them need in order to survive and thrive.

At the same time, DAIAs also stimulate an immune response in humans, making us less susceptible to the superbugs in the first place.

In lab tests, DAIAs were shown to be effective against bacteria including E. coli, a common source of infection that’s becoming increasingly resistant to antibiotics.

DAIAs even target pan-resistant bacteria – bacteria that’s resistant to every antibiotic drug there is on the market.

‘We took a creative, double-pronged strategy to develop new molecules that can kill difficult-to-treat infections while enhancing the natural host immune response,’ said study author Farokh Dotiwala at the Wistar Institute, University of Pennsylvania, US.

‘We reasoned that harnessing the immune system to simultaneously attack bacteria on two different fronts makes it hard for them to develop resistance.

‘We believe this innovative DAIA strategy may represent a potential landmark in the world’s fight against AMR, creating a synergy between the direct killing ability of antibiotics and the natural power of the immune system.’

An entire scientific industry is now dedicated to targeting the serious problem of antimicrobial resistance (AMR) and the resulting superbugs.

The World Health Organisation (WHO) estimates that these superbugs will kill 10 million people each year by 2050 – with patients dying because of once harmless infections – and impose a cumulative $100 trillion burden on the global economy. 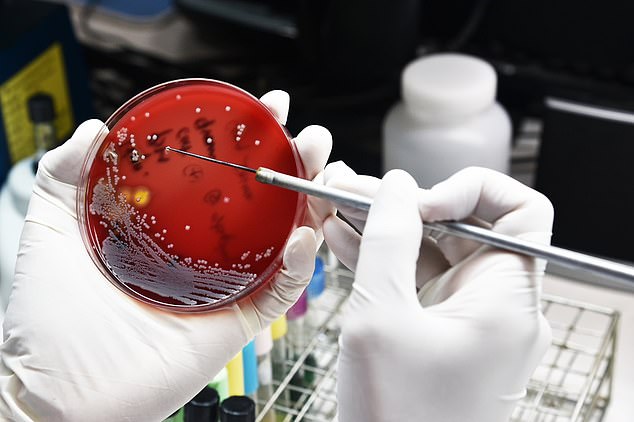 Pathogens such as bacteria and fungi can evolve to become super resistant to our chemical treatments. WHO estimates that superbugs will kill 10 million people each year by 2050, with patients dying because of once harmless infections

WHO has declared AMR as one of the top 10 global public health threats against humanity, while one expert has called the threat of AMR as severe as terrorism.

‘AMR’ includes antibiotic resistance (ABR) – a term specific to bacteria that are resistant to drugs designed to kill them (antibiotics).

To make matters worse, the list of bacteria that are becoming resistant to treatment is growing.

According to the Wistar Institute, few new drugs are in the pipeline, creating ‘a pressing need’ for new classes of antibiotics to prevent public health crises.

However, bacteria can acquire resistance from antibiotics by way of their natural ability to evolve and mutate in the fight for survival. 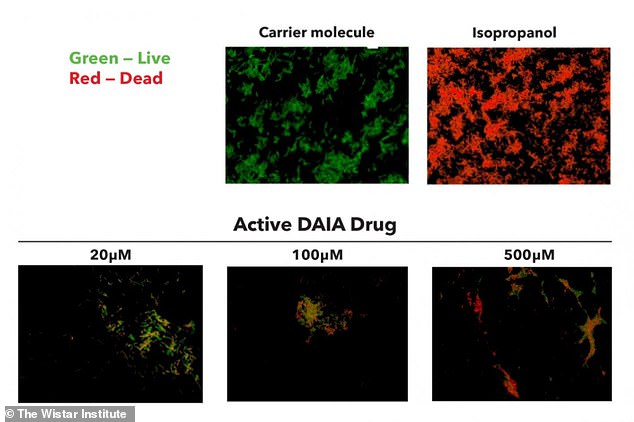 Flourescence microscopy staining showing the effects of DAIA treatment on bacteria viability. E.coli bacteria were treated with isopropanol (a bactericidal chemical compound), a carrier molecule (with no killing action) and growing concentrations of the active DAIA drug, and stained with propidium iodide (PI, red), which stains dead cells, and SYTO 9 (green), which stains live cells only

Wistar Institute researchers focused on a metabolic pathway that is essential for most bacteria but absent in humans, making it an ideal target for antibiotic development.

This pathway, called methyl-D-erythritol phosphate (MEP) or non-mevalonate pathway, is responsible for biosynthesis of isoprenoids – molecules required for cell survival in most disease-causing bacteria.

The lab targeted the IspH enzyme, an essential enzyme in isoprenoid biosynthesis, as a way to block this pathway and kill the microbes.

Given the broad presence of IspH in the bacterial world, this approach likely targets a wide range of bacteria, the researchers say.

They then used computer modelling to screen several million commercially available compounds for their ability to bind with the enzyme.

They selected the most potent ones that inhibited IspH function as starting points for drug discovery.

They tested clinical isolates of antibiotic-resistant bacteria, including a wide range of pathogenic gram negative and gram positive bacteria, ‘in vitro’ (in a glass petri dish).

All compounds tested were shown to be nontoxic to human cells.

The promising study has been published in Nature.

AMR ‘AS DANGEROUS AS TERRORISM’

Antimicrobial resistance (AMR) occurs when bacteria, viruses, fungi, and parasites change over time and no longer respond to medicines, making common infections harder to treat and increasing the risk of disease spread, severe illness and death.

Antibiotics have been doled out unnecessarily by GPs and hospital staff for decades, fueling once harmless bacteria to become superbugs.

The World Health Organisation (WHO) has previously warned if nothing is done the world is heading for a ‘post-antibiotic’ era.

It claimed common infections, such as chlamydia, will become killers without immediate solutions to the growing crisis.

Bacteria can become drug resistant when people take incorrect doses of antibiotics or if they are given out unnecessarily.

Former chief medical officer Dame Sally Davies previously claimed that the threat of antibiotic resistance is as severe as terrorism.

‘If we don’t take action, then we may all be back in an almost 19th century environment where infections kill us as a result of routine operations,’ she said.

‘We won’t be able to do a lot of our cancer treatments or organ transplants.’

WHO estimates that superbugs will kill 10 million people each year by 2050, with patients succumbing to once harmless bugs.

Professor Kinch said: ‘We tend to refer to the antibiotics crisis as a looming one, but it is not that at all – it’s a current crisis.

Another unnamed expert told Byrson: ‘ We are looking at a possibility where we can’t do hip replacements or other routine procedures because the risk of infection is too high.’