A neuroscientist is arguing notorious US serial killer Jeffrey Dahmer is not a psychopath because he showed ’emotional empathy with people’.

Professor James Fallon, 74, a physciatrist at the University of California, Irvine argues that Dahmer’s behavior matches more that of someone with borderline personality disorder (BPD).

It is a condition where a person suffers an impacted ability to regulate their emotions and from poor impulse control.

Dr Fallon believes the killer, who has recently risen to fame once more as a result of a hit Netflix series, is suffering from the condition because of his unstable childhood.

Many believe that Mr Dahmer and others like him are psychopaths, misusing the term as a catch-all for any erratic or dangerous behavior.

Psychopaths are people who lack empathy, are manipulative and often have a total disregard for the consequences of their actions.

The infamous murderer was diagnosed with BPD before his 1992 murder trial.

Jeffrey Dahmer was an infamous serial killer who killed 16 people in Wisconsin and Ohio between 1978 and 1991. He was recently brought into prominence by a hit Netflix series dramatizing  his crimes. Pictured: Dahmer at his 1992 trial in Milwaukee, Wisconsin 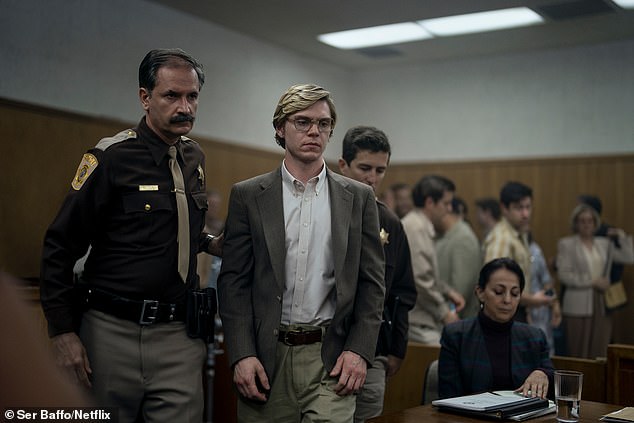 The crimes of Jeffrey Dahmer rose to prominence once more when Netflix released a series dramatizing his story earlier this year. Pictured: Dahmer, portrayed by actor Evan Peters, in the Netflix series

Fallon argues that because of Dahmer’s substance addictions, unusual sexual behaviors and inability to control his anger, he likely has BPD.

Each of those are traits more associated with the condition than they are psychopathy. 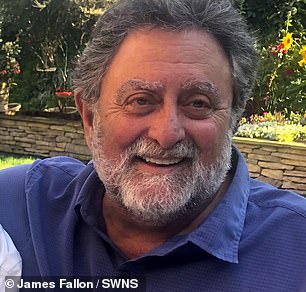 Dr James Fallon (pictured), argues that Jefferey Dahmer was not a psychopath and was instead just showing symptoms of his BPD

‘Jeffrey Dahmer was not a psychopath. His characteristics all point to BPD,’ James said.

‘It was never confirmed he was a psychopath but everyone assumed for simplicity’s sake that a bad person is a psychopath.

‘He showed emotional empathy with people and many psychopaths don’t have that.’

Dr Fallon has studied the brain imaging of psychopaths – particularly those of murderers and serial killers – since 1989.

He also researched several other personality disorders, including BPD.

Dr Fallon believes this is what Mr Dahmer had rather than psychopathy – because he had too much fear of abandonment to fit the tropes of a psychopath.

The doctor said there are certain aspects of Dahmer’s behavior that didn’t fit into the tropes of psychopathy.

He highlighted how the serial killer showed emotional empathy and developed connections with people in a way a psychopath wouldn’t – because his crimes appeared to be motivated by intense fear of abandonment.

He said: ‘A common thing with people with BPD is that they have these crazy fears of being abandoned.

‘Jeffrey Dahmer seemed to fear this all the time – when the men he met tried to leave him, he would kill them so they couldn’t.’

Dr Fallon added that even Dahmer’s most infamous behavior – eating his victims which earned him the nickname ‘the Milwaukee Cannibal’ – can be attributed to this.

He said this cannibalism likely stemmed from a desire to make someone be a part of you forever – so they can’t leave you.

‘A lot of people feel this with babies or puppies, like ‘I love this baby so much that I want to eat it’ – that’s actually an impulsive take on an otherwise normal way of thinking about ingesting someone,’ he said.

‘Dahmer took it to extremes because he needed that feeling that the person would always be with him and he’d never be abandoned.’

Other key behaviors which James said indicates he had extreme BPD include his unusual sexuality – recklessly engaging in often unsafe sex.

He also highlighted self-destructive behaviors such as putting himself in risky situations which could have endangered him, as well as his notorious substance abuse – both more common of BPD than psychopathy.

Dr Fallon concluded: ‘When you think of the famous serial killers, Dahmer included, everyone loves to think for simplicity’s sake that they’re all the same.

‘It’s never been fully confirmed Dahmer was a psychopath but it does keep coming up.

‘But his characteristics don’t agree and I don’t believe he was.

‘We’ll never know for sure because we can’t see his genetics or brain images, but I feel he was more like someone with BPD.’

WOULD YOU KNOW HOW TO SPOT A PSYCHOPATH?

Psychopaths display different traits depending on their disorder.

Common signs include superficial charm, a grandiose notion of self-worth, the need for stimulation and impulsiveness, pathological lying, the ability to manipulate others and a lack of remorse and empathy.

But despite the popular association, not all psychopaths become killers.

This is down to incongruous behaviour because psychopaths tend to do a lot of acting to deceive, or mimic normal reactions, sometimes changing their views and reactions quickly.

For example, Self-professed psychopath Jacob Wells said that upon meeting someone, he tries to become ‘the most interesting person they know’ and presumably adopts suitable interests and responses to do this.

His response also gives away another common trait – a grandiose notion of self-worth – in that he can be the most interesting person in the room.

This may be because they are unable to understand emotions such as fear and love, but can mimic them.

Psychopaths display different traits depending on their disorder, but common signs include superficial charm and the ability to manipulate others. Despite the popular association, not all psychopaths become killers (stock image)

Generally psychopaths’ ’emotions’ are shallow and short-lived and there is a manipulative ulterior motive to showing them.

For example, Mr Wells said he offers to do favours and tells false secrets to people to gain their complete trust.

He also displays insincere charm – another trait associated with psychopaths.

He says: ‘I keep secrets, and tell them fake secrets to further gain their trust, and once they trust me enough, I ask for favours, reminding them of the favours I did them. I can get literally anything from them, which is incredibly useful.’

Psychopaths typically display an incredible ability to manipulate others and sometimes take pleasure in doing so.

Psychopaths often have an air of superiority about them, perhaps shown by Mr Wells’ belief he can spot other psychopaths

Even expert Dr Hare, who came up with the Hare Psychopathy Checklist-Revised (PCL-R) used as a diagnostic tool to determine where someone lies on the psychopathy spectrum, warns that anyone can be duped during a short interaction with a psychopath.