The UK’s biggest teacher union has demanded that secondary schools only open on a week-on, week-off system after lockdown.

Kevin Courtney, joint general secretary of the National Education Union (NEU) has said the new rotas should be used until the country has a ‘fit for purpose’ Test and Trace system.

The union has already pleaded for schools to close during lockdown to no avail.

Andy Burnham, mayor of Greater Manchester, agreed that schools should close so the ‘full benefits’ of a national lockdown will be seen.

He told Sky News: ‘If we’re going to do this, let’s do it properly and get cases right down before January – traditionally the most difficult month in the NHS.

‘Of course it’s difficult closing schools, but I think schools will be less disrupted if we get this real circuit break. To be honest, it’s not a proper circuit break unless we really do close everything.’

As for higher education, Jo Grady, the general secretary of the Universities and College Union (UCU) said it would be ‘incomprehensible’ to allow in-person teaching to continue.

However, Mr Johnson confirmed at Saturday evening’s Downing Street press conference that schools, universities and colleges would remain open as he announced a new nationwide lockdown.

He said the country could not afford to allow the virus to ‘damage our children’s futures even more than it has already.’

However, Anne Longfield, the Children’s Commissioner for England, said it is ‘very welcome’ that schools would remain open and added it would have been a ‘disaster’ if they were to close.

Her comments were echoed by the prominent headmistress Katharine Birbalsingh, who said it was ‘wonderful’ that schools will remain open.

Confirming a new national lockdown from Thursday, in which bars and restaurants will have to close, Mr Johnson insisted that schools would remain open.

He said: ‘My priority – our priority – remains keeping people in education.

‘So childcare, early years settings, schools, colleges and universities will all remain open.

‘Our senior clinicians still advise that school is the best place for children to be. 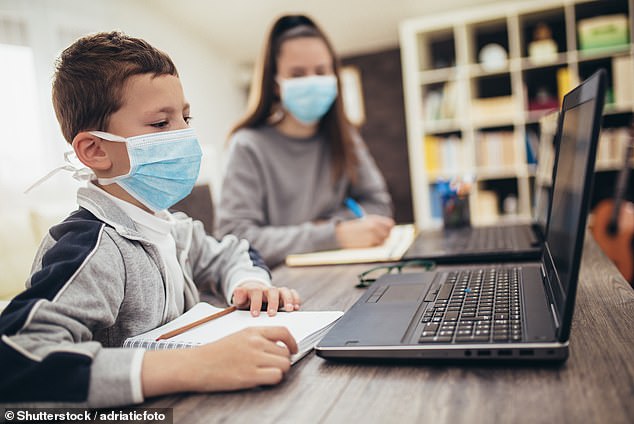 The union has already pleaded for schools to close during lockdown to no avail. Stock picture

‘We cannot let this virus damage our children’s futures even more than it has already and I urge parents to continue taking their children to school.

‘I’m extremely grateful to teachers across the country for their dedication in enabling schools to remain open,’ he added.

And Ms Birbalsingh, who is headmistress of top-performing Michaela Community School in Wembley, north-west London, also welcomed the news.

She told MailOnline: I think it’s wonderful that the schools are staying open.

‘All children have suffered in terms of their learning but all the more so the disadvantaged and without schools being open I really fear for their welfare.

‘It is essential to keep them open. I’m very grateful that they remain open not just for the sake of the children but for my own sake. I get to work every day and i love that.

‘Well I suppose the unions will do what the unions do and the rest of us will get on with the job.’

The NEU is gunning for secondary school students to be partially taught at home after lockdown.

Its analysis of the latest data from the Office of National Statistics claimed that coronavirus rates were the one of the highest in the country in secondary school students.

But Mr Courtney said not including schools and colleges in new lockdown measures would likely lead to the need for even longer lockdowns in future.

‘The latest figures from the ONS estimate that 1 per cent of primary pupils and 2 per cent of secondary pupils have the virus and that these levels have increased dramatically since wider opening in September,’ he said.

‘The National Education Union called for a two-week circuit break over half-term to include schools, which the Wales Government and the Northern Ireland assembly have done – but the Government in Westminster has ignored this call.

‘More severe measures are now called for as a result, the Government should not make this mistake again. 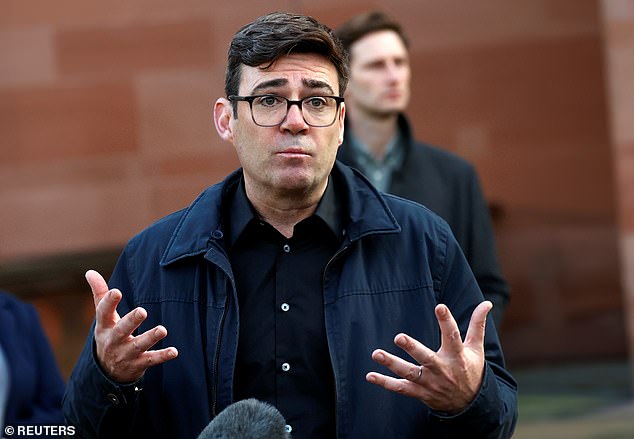 Andy Burnham (pictured), mayor of Greater Manchester, agreed that schools should close so the ‘full benefits’ of a national lockdown will be seen

‘The Government should include all schools in proposals for an immediate national lockdown and as a minimum be preparing for school rotas at the end of that period, including by actually meeting its promise to deliver broadband and equipment to those children who do not have them.

‘It is also vital that the Government ensure proper financial support for all those affected by lockdown including crucial supply teachers and other staff.’

Mr Courtney told The Telegraph: ‘The rota system would run for as long as necessary, certainly until we have a fit-for-purpose test, trace and isolate system,” Mr Courtney said.

‘The need for rotas will lessen when safety measures are significantly improved, and when the R rate has reduced to below one.’

However, a landmark coronavirus study in August found the risk of transmission in classrooms is minimal.

The PHE study, which tested more than 20,000 pupils and 100 teachers, is hoped to allay the concerns of wary teacher unions, which thwarted ministers’ initial attempts to resume classes for fears of staff catching the virus.

The organisation’s deputy director, Dr Susan Hopkins, told Times Radio Breakfast: ‘The majority of children have infection that’s related to infection in their households, which is clearly the most likely place that children will get infected.

‘We have also agreed that we want our children to be in education, that we think that the damage done from a year of children’s education lost is too high for us to accept as a society.’

The Government has announced that millions of quick and cheap Covid-19 tests will be distributed across the country to tell students if they are infectious in just 10 to 15 minutes.