Netflix is rolling out a new feature globally as part of its efforts to crack down on password sharing.

This means favourites, recommendations and viewing history are salvaged when profile owners start a Netflix account of their own.

Netflix says the tool lets profile holders easily transfer their profile from the account of someone they’re no longer in contact with – such as an ex-boyfriend.

But it also encourages people with profiles on Netflix to start up – and pay for – their own account rather than ‘freeloading’ off someone else’s.

HOW TO ACTIVATE PROFILE TRANSFER

– Go to the ‘Transfer Profile’ option when you hover over your profile icon in the dropdown menu on the homepage.

Netflix said the ‘much requested’ feature is now rolling out to all users around the world, and that an email will be sent as soon as it’s available for each account.

The news come shortly after Netflix announced that its new ad-supported tier will cost £4.99 per month and be arriving next month.

Announcing the rollout, Timi Kosztin, product manager at Netflix, wrote in a blog post: ‘People move. Families grow. Relationships end. But throughout these life changes, your Netflix experience should stay the same.’

‘No matter what’s going on, let your Netflix profile be a constant in a life full of changes so you can sit back, relax and continue watching right from where you left off.’

Profile Transfer essentially allows profile owners to transfer all their personalised settings and recommendations to a new account.

To transfer a profile, users need to select the ‘Transfer Profile’ option on the dropdown menu on the homepage and then follow the instructions.

They’ll need to enter their email address, a new password and other data that new sign-ups have to enter – including billing information.

Netflix says Profile Transfer can be turned off in account settings at any time, and that the duplicated profile won’t be automatically removed from the original account.

On Netflix, a single account can host up to five ‘profiles’, each individually named and curated for one person. 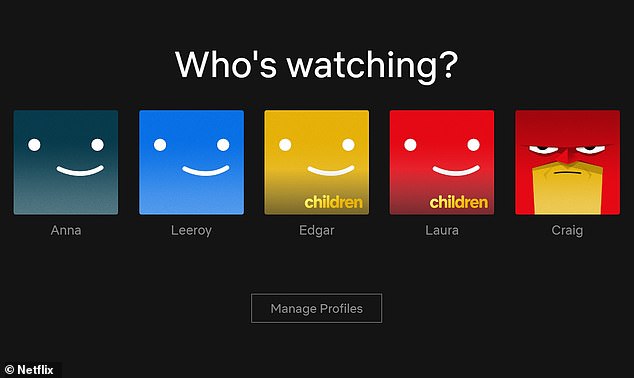 On Netflix, a single account can host up to five ‘profiles’, each individually named and curated for one person 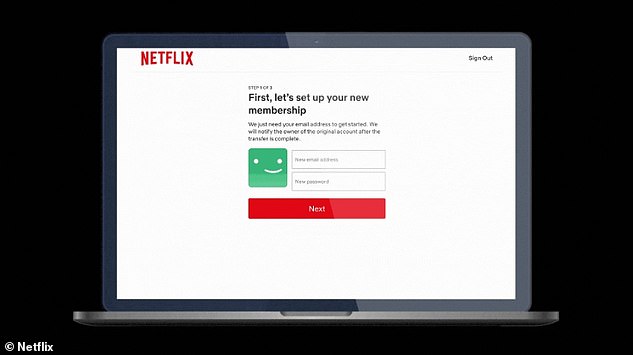 Netflix has announced that its new ad-supported tier will cost £4.99 per month and be arriving in November.

Called ‘Basic with Adverts’, the new tier will launch for users in the UK, the US and several other countries on November 3.

Basic with Adverts will show an average of four to five minutes of adverts per hour, with each advert 15 or 30 seconds in length.

The ads will play before and even during content, which could infuriate viewers if they interrupt a particularly dramatic or suspenseful moment of their show.

Each person can enjoy customised features – such as algorithmically-powered viewing recommendations, viewing history and settings – on their profile.

Netflix originally designed this feature so that multiple members of a household, such as children, can enjoy content without having to start their own Netflix account and pay the monthly fee.

But there’s nothing to stop it being used across multiple households, even though the Netflix terms of service say that users of an account must live in the same household.

In effect, it means that five people living under five different addresses can have their own profile under one account.

This deprives Netflix from a potential revenue source, and ‘undermines our long term ability to invest in and improve our service’, Netflix says.

According to a 2019 study, Netflix may be losing out on a whopping $192 million (£138 million) worth of revenue each month from password sharing.

On Netflix, a single account holder counts as one subscriber – and subscribers are something the firm is desperately trying to attract and hold on to.

In July, Netflix announced that it had lost nearly one million subscribers in the second quarter of the year – almost five times the amount lost in the first quarter.

Netflix is scheduled to release third quarter earnings later today (October 18), which will reveal how many subscribers it added or lost between July and September. 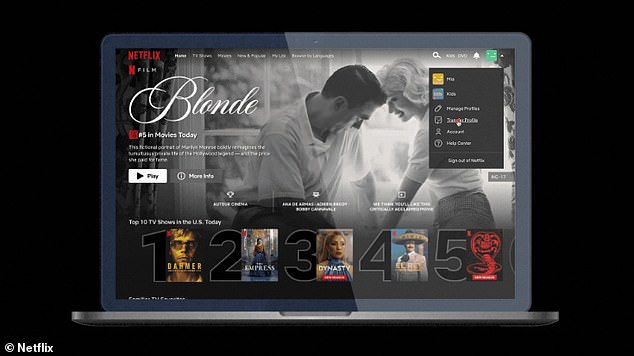 To transfer a profile, users need to select the ‘Transfer Profile’ option on the dropdown menu on the homepage and then follow the instructions

This is not Netflix’s first attempt to restrict password sharing; in March it started testing a system where users pay an extra fee to share their account with people outside their household.

The system, which was tested in Peru, Chile, and Costa Rica, used information such as IP addresses and device IDs to determine the location of devices.

Last year, it also started sending messages to viewers asking them to verify that they share a household with the account holder.

ALMOST ONE MILLION BRITS HAVE CANCELLED SUBSCRIPTIONS TO STREAMING SERVICES INCLUDING NETFLIX THIS YEAR DUE TO COST OF LIVING, REPORT REVEALS

Almost one million Brits have cancelled their subscriptions to video streaming services so far this year amid the cost-of-living crisis, a new report reveals.

According to London analytics firm Kantar, the number of UK homes with at least one paid-for video subscription fell by 937,000 between January and September.

In the last quarter alone – between July and September – 234,000 British households have ditched video streaming.

The public are being forced to cancel subscriptions to the likes of Netflix, Amazon Prime Video and Disney+ to pay for energy, food and mortgage bills.

But the public is also a victim of ‘content fatigue’ – a sense of being overwhelmed by the amount of content available to stream.