Elon Musk on Monday accused a MSNBC host of ‘basically saying Republicans are Nazis,’ after the anchor, Mehdi Hasan, warned that Musk’s plan to give the left and right an equal platform on Twitter was dangerous.

Musk, 50, on April 25 reached an agreement with Twitter’s board to buy the company for $44 billion.

He said he was motivated by a wish to restore Twitter as a place for the free exchange of ideas, and has repeatedly said he wants to move away from ‘censorship’ and err on the side of free speech.

His critics fear that this will result in an explosion of hate speech.

Hasan, 43, on Sunday told viewers of his show: ‘It’s easy in American discourse to talk simplistically about the far-left and the far-right as two equally dangerously fringe boxes.

‘Elon Musk has done it plenty of times just in the past week.

‘And this asymmetrical polarization of U.S. politics would be laughable if it went so horrifying.’

MSNBC host Mehdi Hasan on Sunday warned about Elon Musk’s promise to open up Twitter, saying that there were dangers inherent in unbridled free speech 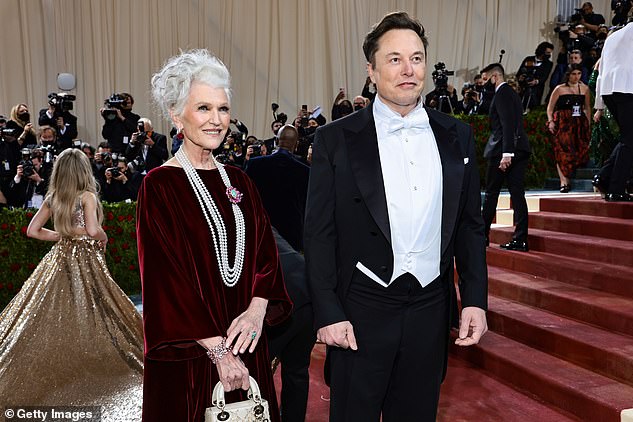 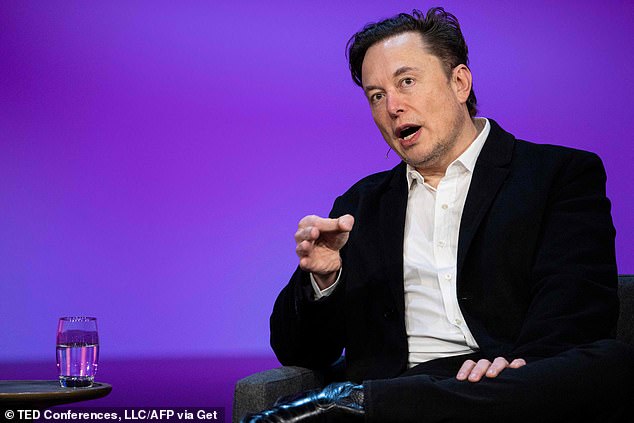 Musk is pictured on April 14, at a TED conference in Vancouver

Hasan said the United States was ‘living through an unspeakably dangerous moment,’ noting that ‘the pro-QAnon, pro neo-Nazi faction of the Republican party is poised to expand dramatically’ in November’s midterms.

Hasan said that, if Trump wins re-election in 2024, Musk’s purchase of Twitter could be seen as ‘a pivotal moment’.

It would be seen, he continued, as the moment: ‘When a petulant and not so bright billionaire casually bought one of the world’s most influential messaging machines and just handed it to the far-right.’ 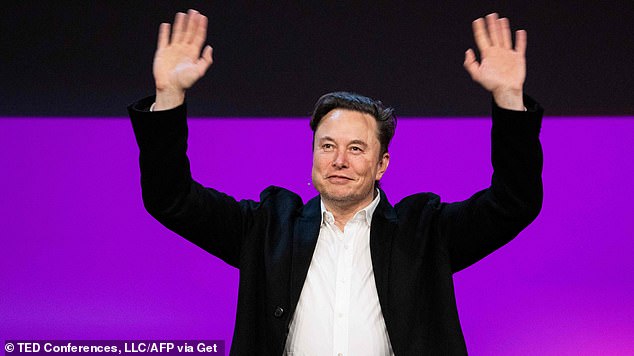 Musk was unimpressed by Sunday’s criticism, and fired back on Twitter

Musk on Monday was unimpressed by Hasan’s critique.

‘NBC basically saying Republicans are Nazis,’ he tweeted in a thread.

‘I’m not ‘basically saying’ Republicans are Nazis, watch the clip: I’m calling out groups of House Republicans who attend conferences with neo-Nazis and echo their Nazi rhetoric.

He then invited Musk onto his show.

‘Instead of replying to right-wing, bad-faith Twitter accounts that selectively clip the words of liberals and leftists, and in this case prompt you to then distort my words, why not come on my show and do a robust interview with me on your views on free speech?’

‘So what say you @elonmusk?’ he tweeted.

‘Rather than take softballs on the TED stage, why not come on my show and have a robust discussion with me about the nature and scope of free speech in America?

‘Is there anything more pro-free speech than a good-faith, informed public debate?’ 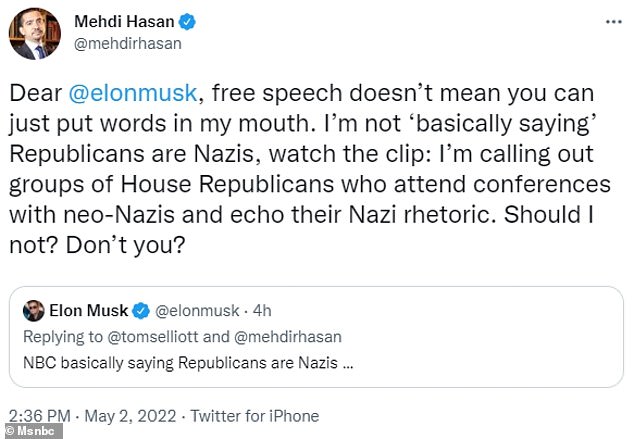 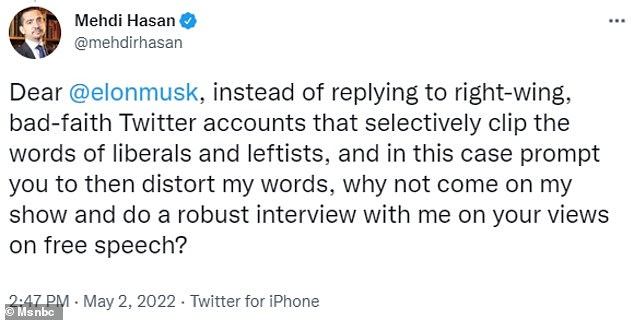 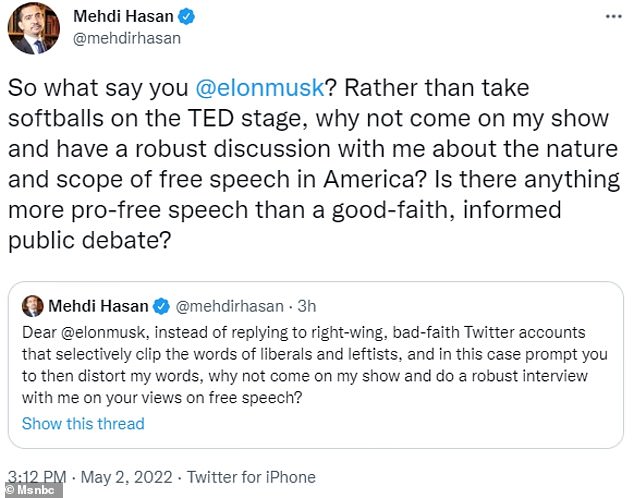 Musk on Monday night was at the Met Gala in New York City – his first public outing since sealing the deal to buy Twitter.

He was asked by La La Anthony, interviewing guests as they arrive, about his plans for Twitter.

‘My goal, assuming everything gets done, is to make Twitter as inclusive as possible and to have as broad a swathe of people on Twitter as possible,’ he said.

‘And that it is entertaining and funny and they have as much fun as possible.’ 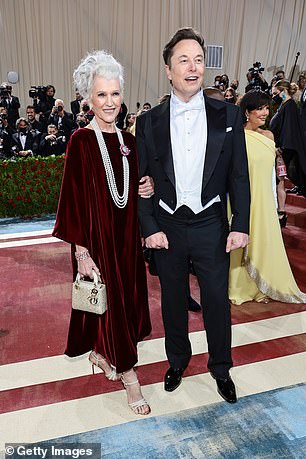 Hours before the gala began, it emerged that Musk is in talks with large investment firms and high net-worth individuals about taking on more financing for his $44 billion acquisition of Twitter and tying up less of his wealth in the deal, Reuters reported.

Musk is the world’s richest person, with Forbes estimating his net worth at about $245 billion.

Yet most of his wealth is tied up in the shares of Tesla, the electric car maker he leads.

The new financing, which could come in the form of preferred or common equity, could reduce the $21 billion cash contribution that Musk has committed to the deal as well as a margin loan he secured against his Tesla shares, the sources said.

Musk has also pledged some of his Tesla shares to banks to arrange a $12.5 billion margin loan to help fund the deal.

Investors have been fretting over whether Musk will complete the Twitter deal given that he has backtracked in the past.

In April, he decided at the last minute not to take up a seat on Twitter’s board.

In 2018, Musk tweeted that there was ‘funding secured’ for a $72 billion deal to take Tesla private but did not move ahead with an offer.

Twitter shares ended trading up 0.2% at $49.14 in New York on Monday, closer to the $54.20 per share acquisition price, as investors interpreted the news on the new financing discussions as making it slightly more likely that the deal will close.

Musk would have to pay a $1 billion termination fee to Twitter if he walked away, and the social media company could also sue him to complete the deal.

Musk, who calls himself a free speech absolutist, has criticized Twitter’s moderation policies.

He wants Twitter’s algorithm for prioritizing tweets to be public and objects to giving too much power on the service to corporations that advertise.