EXPRESS INFORMER > Sports > NBA ROUND-UP: Steph Curry’s return is soured as the Warriors are stunned by a depleted Suns team

Mikal Bridges had 26 points, nine rebounds and five assists and the undermanned Suns dominated in Stephen Curry’s return from injury as Phoenix beat the Golden State Warriors for a third time this season, 125-113 on Tuesday night to snap a season-worst six-game skid.

Former Warriors guard Damion Lee received his championship ring in a pregame ceremony from brother-in-law Curry, then scored 22 points and grabbed seven rebounds against his former team. He converted six free throws over the final 1:13 and went 14 of 14 from the line overall.

Curry came back from an 11-game absence with a partially dislocated left shoulder to score 24 points on 8-for-22 shooting. Klay Thompson had 29 points with six 3-pointers — four 3s and 14 points in the first quarter alone. Jordan Poole’s 3 with 1:28 remaining cut it to 117-111, and he scored 27 points.

While Warriors coach Steve Kerr noted, “to go 6-5 without Steph is an accomplishment,” the reigning NBA Finals MVP couldn’t do it all against a Phoenix team missing injured stars Devin Booker, Chris Paul, Deandre Ayton and Cameron Johnson. The first two meetings in the desert were lopsided, with the Suns winning 134-105 and 130-119. 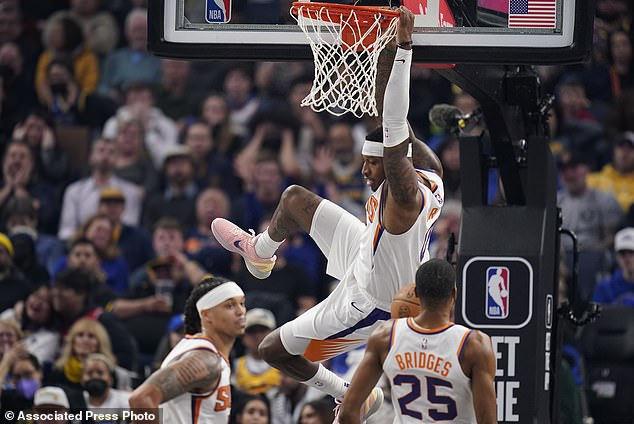 The Warriors have lost three in a row after a season-best five-game winning streak, wrapping up an eight-game homestand that matched the longest in franchise history.

Andre Iguodala was ejected with 4:30 left in his second game played this season. But the defending champions had their starting five back together for the first time in several weeks.

Thompson was a late scratch with soreness in his surgically repaired left knee for a 115-101 loss to the Magic on Saturday night as the Warriors dropped consecutive home games for the first time all season. Now they have to hit the road again trying to best their 3-16 record away from Chase Center. 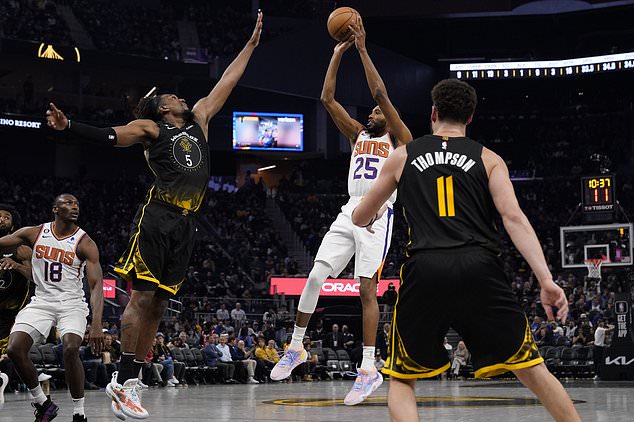 Jimmy Butler´s three-point play with 12.9 seconds left capped an NBA-record performance by the Miami Heat and gave them a 112-111 victory over the Oklahoma City Thunder on Tuesday night. 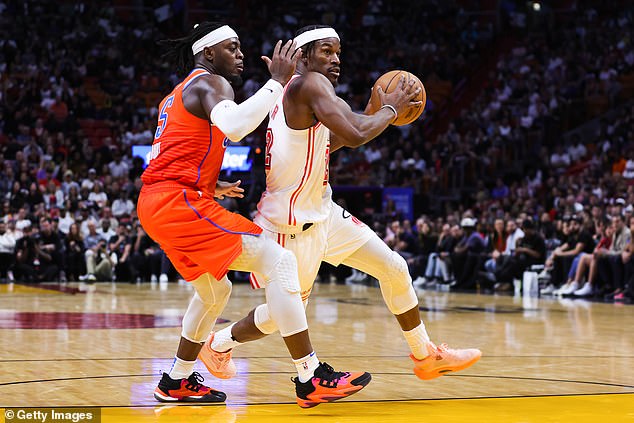 Embiid returned from a three-game absence with a sore left foot with a new look. But it was the same dominant performance out of last season´s NBA scoring champion.

Two days after Harden also had a triple-double in the 76ers´ victory at Detroit, the Sixers raced to a 24-point lead in the first half. 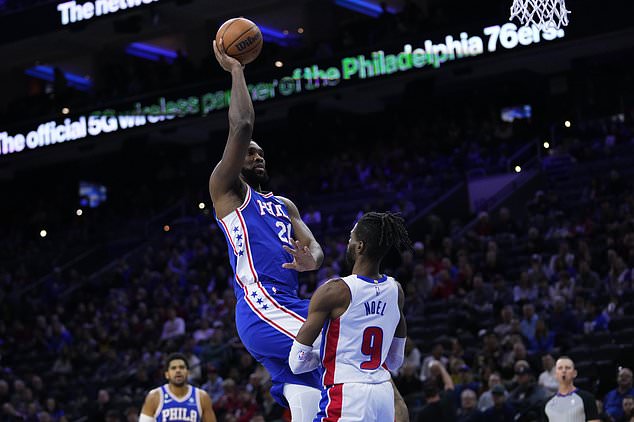 O.G. Anunoby had 22 points, matching his career high with six 3-pointers. The Raptors made a season-high 20 3-points in 44 attempts.

Terry Rozier scored 33 points and LaMelo Ball had 24 points and a season-high 14 assists for Charlotte. The Hornets lost for the fifth time in six games. 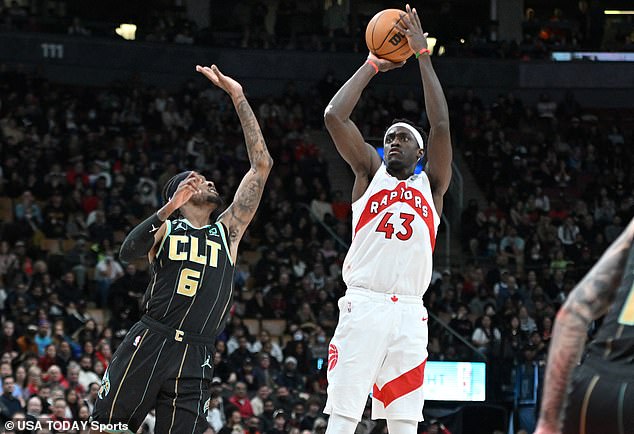 Donovan Mitchell had 46 points in his return to Utah, but the Jazz rallied late behind Jordan Clarkson to beat the Cleveland Cavaliers 116-114 on Tuesday night.

Clarkson scored 32 points, including five 3-pointers, and poured in nine straight down the stretch to fuel a decisive 13-0 run.

Lauri Markkanen had 25 points and 16 rebounds for the Jazz. Malik Beasley, Mike Conley and Nickeil Alexander-Walker added 13 apiece as Utah won for just the second time in nine games. 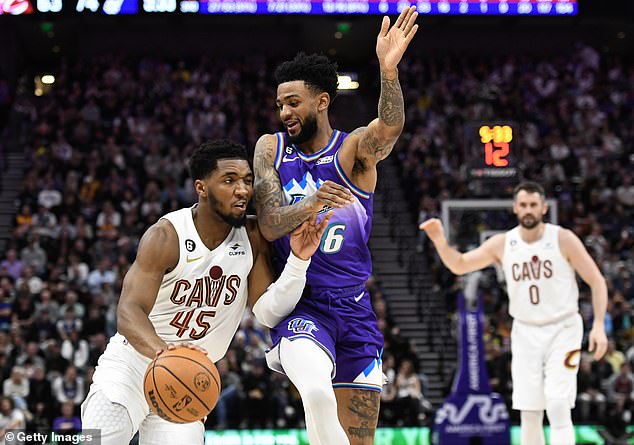 Damian Lillard had 30 points for the Blazers, who lost their fourth straight.

The Magic led 19 points in the first half, but the Blazers closed the gap in the second quarter to tie it at 50 at halftime. 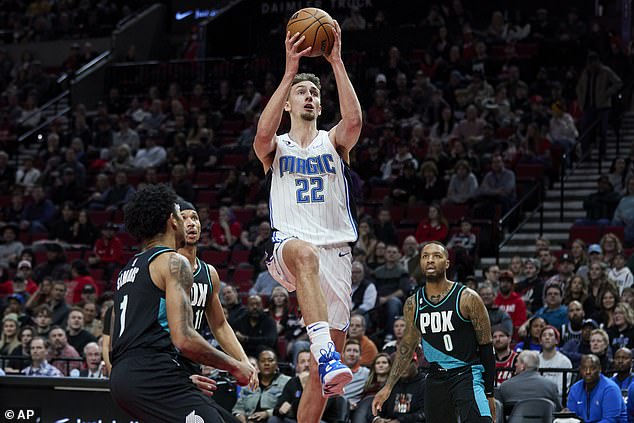 Kawhi Leonard scored 33 points to carry the Los Angeles Clippers to a win over the Dallas Mavericks on Tuesday.

Norman Powell provided a strong contribution off the bench as scoring 27 points.

Luca Doncic continued his amazing season even in defeat scoring 43 points and ending the night with more than double as many points as the nearest teammate. 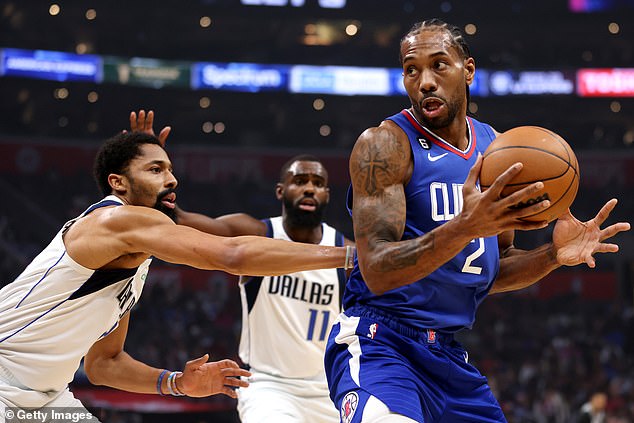