EXPRESS INFORMER > Sports > NBA: Robert Sarver has started the process of SELLING the Phoenix Suns amid calls a lifetime ban

Phoenix Suns and Mercury owner Robert Sarver has announced that he has started the process to sell both franchises.

The move comes after Sarver was handed a one-year ban and $10million fine by the NBA following a league investigation into allegations that he engaged in racism, sexism, and bullying.

The NBA revealed it found that Sarver used the N-word on at least five occasions among other transgressions, including the use of language and conduct demeaning to female employees, over his nearly two-decade tenure as owner of the Suns and WNBA’s Mercury.

In a statement released on Wednesday, Sarver said: ‘Words that I deeply regret now overshadow nearly two decades of building organizations that brought people together – and strengthened the Phoenix area – through the unifying power of professional men’s and women’s basketball.

‘As a man of faith, I believe in atonement and the path to forgiveness. I expected that the commissioner’s one-year suspension would provide the time for me to focus, make amends and remove my personal controversy from the teams that I and so many fans love.

‘But in our current unforgiving climate, it has become painfully clear that that is no longer possible – that whatever good I have done, or could still do, is outweighed by things I have said in the past. For those reasons, I am beginning the process of seeking buyers for the Suns and Mercury. 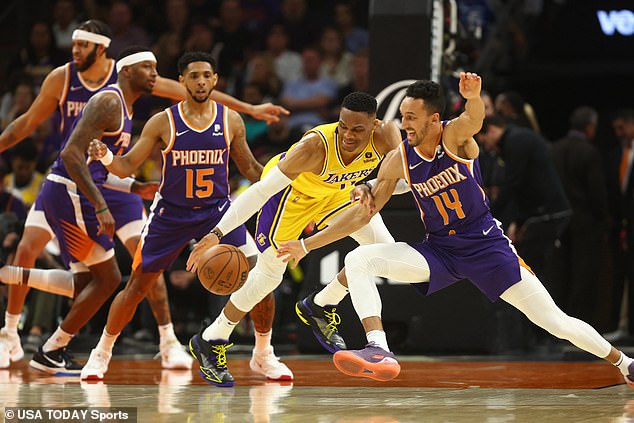 ‘I do not want to be a distraction to these two teams and the fine people who work so hard to bring the joy and excitement of basketball to fans around the world. I want what’s best for these two organizations, the players, the employees, the fans, the community, my fellow owners, the NBA and the WNBA. This is the best course of action for everyone.

‘In the meantime, I will continue to work on becoming a better person, and continuing to support the community in meaningful ways. Thank you for continuing to root for the Suns and the Mercury, embracing the power that sports has to bring us together.’

NBA commissioner Adam Salver released a statement Wednesday afternoon that read: ‘I fully support the decision by Robert Sarver to sell the Phoenix Suns and Mercury. This is the right next step for the organization and community.’ 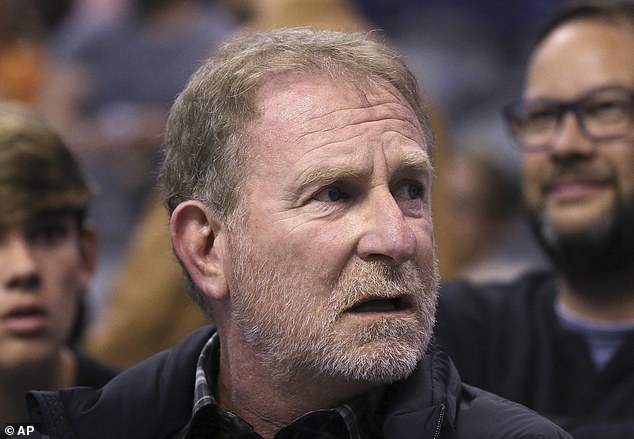 No clear suitors have yet emerged but reports emerged last year that former Disney CEO Bob Iger was interested in buying the team.

Last week, the NBA suspended and fined Sarver after an investigation corroborated an ESPN report alleging Sarver used racist language, made sex-related comments to and about women, and mistreated employees.

‘The statements and conduct described in the findings of the independent investigation are troubling and disappointing,’ Silver said.

‘We believe the outcome is the right one, taking into account all the facts, circumstances and context brought to light by the comprehensive investigation of this 18-year period.’

Although witnesses claimed to have heard Sarver use the racist slur, the investigation found that he was either repeating the N-word or purporting to do so. The NBA did not find that Sarver used the term ‘with the intent to demean or denigrate.’ 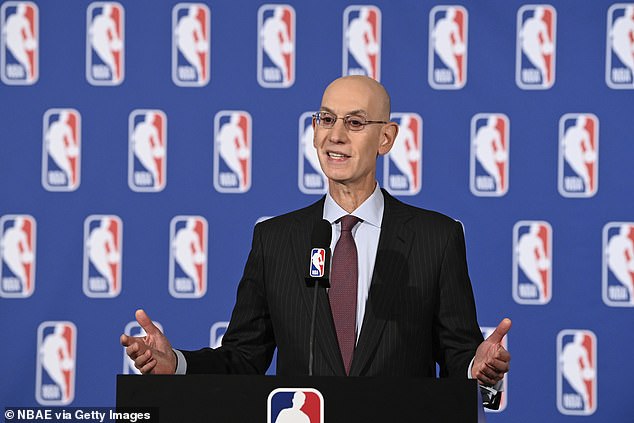 Since the report was released, the National Basketball Players Association (NBPA) has called for Sarver to be banned for life.

Executive director Tamika Tremaglio told ESPN she was speaking on behalf of NBA players in saying they were ‘absolutely calling for’ a lifetime ban.

Meanwhile, Suns minority owner Jahm Najafi had called on Sarver to resign and owner and Phoenix’s jersey sponsor – PayPal – said they would not continue to sponsor the Suns if Sarver returned.

LeBron James seemingly celebrated the news as he tweeted : ‘I’m so proud to be a part of a league committed to progress!’

James was among several NBA stars, including Chris Paul and Draymond Green, who slammed the punishment with some calling for a lifetime ban.

A member of Sarver’s own team, Phoenix Suns Guard Chris Paul, said he was left ‘horrified and disappointed’ by the report on Sarver’s conduct as he slammed the NBA’s sanctions as insufficient.

Paul took to Twitter to hit out at the sanctions, believing that Sarver should have faced a harsher punishment.

Paul hit out at the sanctions, believing that Sarver should have faced a harsher punishment

He posted: ‘Like many others, I reviewed the report. I was and am horrified and disappointed by what I read. This conduct especially towards women is unacceptable and must never be repeated.

‘I am of the view that the sanctions fell short in truly addressing what we can all agree was atrocious behavior. My heart goes out to all of the people that were affected.’

Lakers superstar James hit out at the NBA for their handling of the situation as he insisted there is no place for ‘that kind of behavior’ in the league.

On Twitter he posted: ‘Read through the Sarver stories a few times now. I gotta be honest… Our league definitely got this wrong. I don’t need to explain why.

‘Y’all read the stories and decide for yourself. I said it before and I’m gonna say it again, there is no place in this league for that kind of behavior.

‘I love this league and I deeply respect our leadership. But this isn’t right.

‘There is no place for misogyny, sexism, and racism in any work place. Don’t matter if you own the team or play for the team. We hold our league up as an example of our values and this aint it.’

Meanwhile, Golden State Warriors star Green called for NBA owners to vote to determine whether Sarver should be removed as Phoenix Suns majority owner as he labeled his punishment ‘bulls***’. 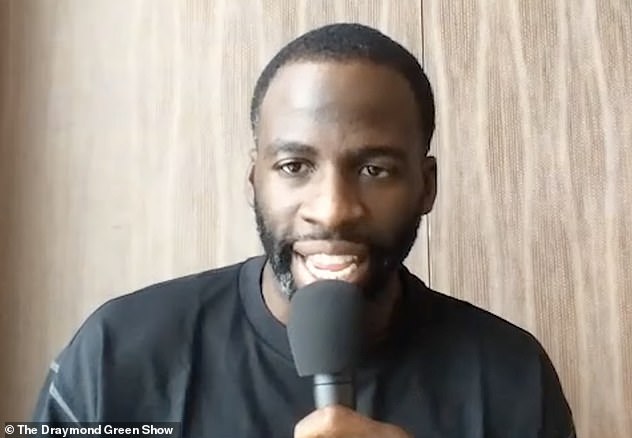 The NBA rules state that in order for an owner to be removed, it needs three-quarters of its board of governors to agree to start the process. Last week, commissioner Silver made it clear that he cannot act alone on ‘the right to take away his team,’ referring to Sarver, in a press conference.

Sarver’s case has drawn comparison’s to that of former Clippers owner Donald Sterling, who was banned for life and fined $2.5m for racist comments in 2014.

Sterling was forced to sell the Los Angeles franchise for $2billion to former Microsoft CEO Steve Ballmer after 33 years of ownership. Sterling sued the NBA in 2014 for $1billion but after a two-and-a-half-year legal battle the suit was settled in 2016 in order to allow Ballmer’s purchase of the Clippers to go through. 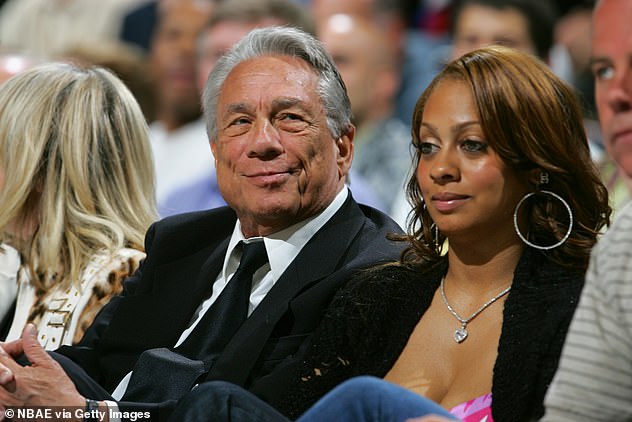 Sarver’s case has drawn comparison’s to that of former Clippers owner Donald Sterling (left), who was banned for life and fined $2.5m for racist comments in 2014

The NBA had the option of giving Sarver a longer ban than the one-year suspension. The $10m fine was the maximum allowable, as was the case with Sterling’s $2.5m fine eight years ago; NBA rules on maximum fines were changed in 2019.

But Silver revealed that Sarver was likely spared even stronger sanctioning by the NBA for his racist, misogynistic and hostile words and actions because of one key conclusion by investigators.

The law firm that spent nearly a year digging into the situation determined Sarver’s use of slurs ‘was not motivated by racial animus.’

Had that not been the case, Silver indicated, Sarver’s punishment – a one-year suspension and $10m fine – would have been far more severe.