A racist pensioner who terrorised a lollipop lady outside Jacob Rees-Mogg’s prep school will be sentenced next month.

Vala’s campaign of harassment took place when he was already subject to a suspended prison sentence.

Many of his crimes took place in front of pupils of the £41,000-a-year school, whose alumni includes Tory minister Rees-Mogg, Andrew Lloyd Webber, and Labour MP Hilary Benn.

Vala was due to be sentenced at Southwark Crown Court today but Judge Philip Bartle ordered further psychiatric reports and adjourned the case until January 22.

‘The victim works as a school crossing attendant for Westminster Under School,’ said Suleman Hussain, prosecuting.

Vala repeatedly approached Ms Khames while she was assisting children as they crossed the road outside the school’s entrance, between September 25 and October 14 this year.

‘He ran over her feet with his shopping trolley, threw her lollipop stick on the floor and shouted “f*** you”.

‘On September 29 the defendant approached the victim while she was working and said “you’re disgusting” and walked away.

‘He repeatedly made comments towards her on multiple dates and she doesn’t have an active record but she hides away from him and is now scared to go to work. 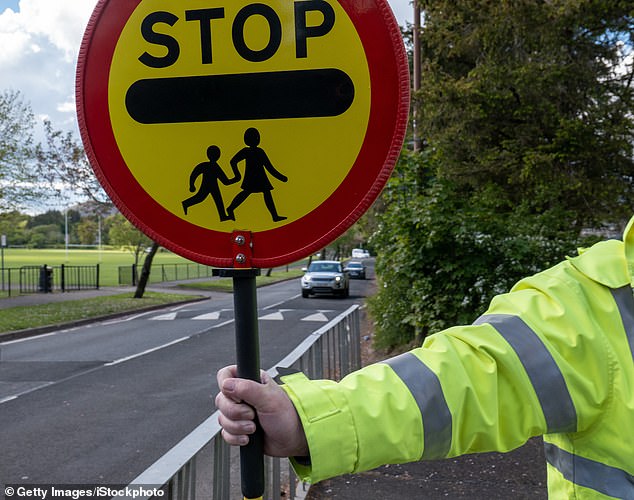 Vala repeatedly approached Ms Khames while she was assisting children as they crossed the road outside the school’s entrance, between September 25 and October 14 this year (stock photo of a crossing guard)

Mr Hussain added that Stephen Bailey, the headteacher, spotted him outside the school on October 14.

Vala was also seen thrusting his hips and making lewd sex gestures in the street.

‘What’s concerning is it occurs just outside the school as the children are released to go home,’ he said, noting children were present at the time of the offences.

Vala replied: ‘She’ got a disease,’ and walked for five metres before turning back to say ‘I’m going to kill you and one of us is going to die today.’

On July 2 Vala called an ambulance to his home near the school and screamed abuse at paramedics.

‘The defendant was subsequently arrested and he continued to shout and swear. He also said Nazi, KKK, Heil Hitler, Heil Hitler.’

On the same day ‘he called a paramedic the word n***** twice and made a Nazi salute in their direction and said Heil Hilter numerous times.

‘He said he was a Nazi and racist and will smash the victim’s head in with a dagger.

Vala also called his local doctors’ surgery and introduced himself as Jack the Ripper.

‘He was intoxicated and rambling and slurring,’ said the prosecutor.

‘He told her he needed help, he was a danger to the public and had a knife and hung up the phone.’

Sumitra Sharma, defending, told the court Vala’s actions were directed at the lollipop lady, not the children.