The husband of jailed Nazanin Zaghari-Ratcliffe today urged Boris Johnson to be ‘brave’ to secure her release from an Iranian prison.

Richard Ratcliffe, who is meeting with the PM at Downing Street this afternoon, said he wants to hold the Prime Minister to his pledge that he would ‘leave no stone unturned’ to bring her home.

Mr Ratcliffe, who is speaking to Johnson along with their five year old daughter at No 10, is re-doubling the pressure to free his wife, who has been in a Tehran jail since 2016 on spying allegations.

Any optimism over Ms Zaghari-Ratcliffe’s chances of freedom has been dampened by the soaring tensions with Iran provoked by the US killing of its top general, Qassem Soleimani.

He last met Mr Johnson when he was foreign secretary in 2017, which came shortly after Mr Johnson had to apologise after wrongly suggesting that Mrs Zaghari-Ratcliffe had been training journalists at the time of her arrest. She has always maintained she was in Iran visiting relatives. 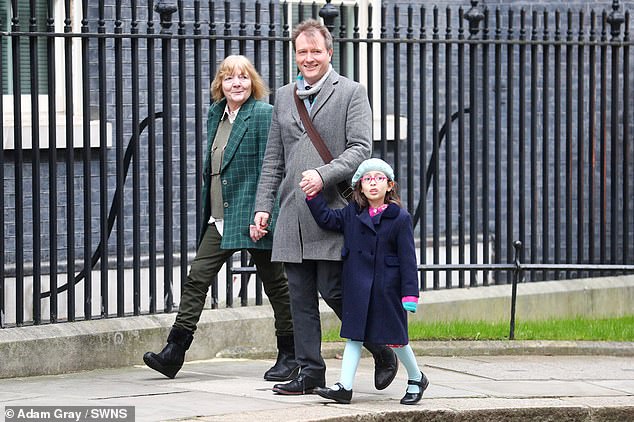 Mr Ratcliffe, pictured arriving in Downing Street today with his daughter Gabriella and his mother Barbara said he wants to hold the Prime Minister to his pledge that he would ‘leave no stone unturned’ to bring her home

The meeting is also being attended by Foreign Secretary Dominic Raab.

‘We remain extremely concerned about her welfare. The UK continues to take every opportunity to raise Nazanin’s case at the most senior levels of the Iranian government.

‘The PM called for the immediate release of Nazanin and other dual nationals when he spoke to President Rouhani on January 9.’ 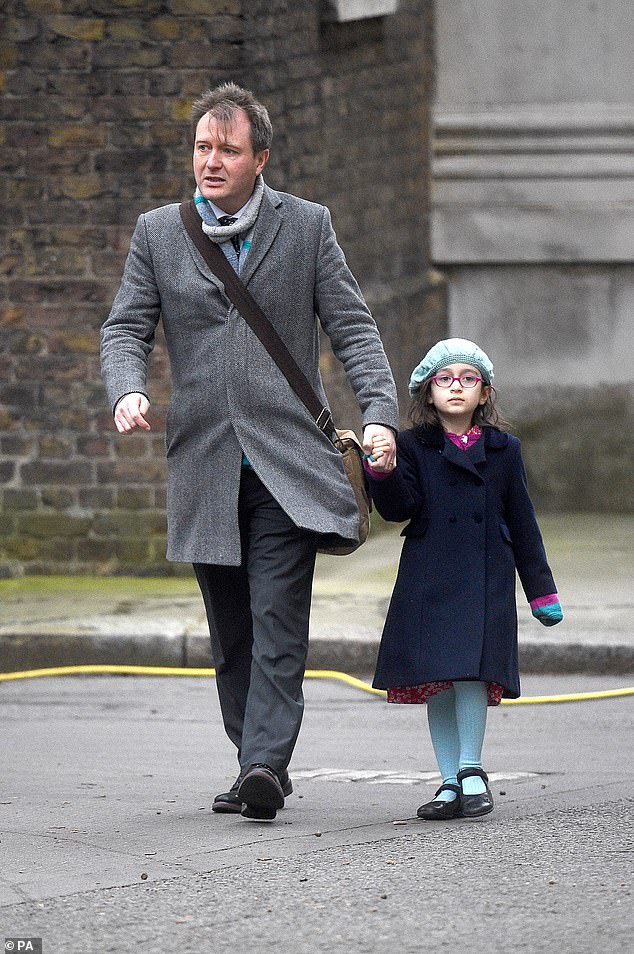 Mr Ratcliffe (pictured this afternoon) told BBC Radio 4’s Today programme: ‘He needs to take responsibility for Nazanin’s case, for upholding the promise he made to us to leave no stone unturned’ 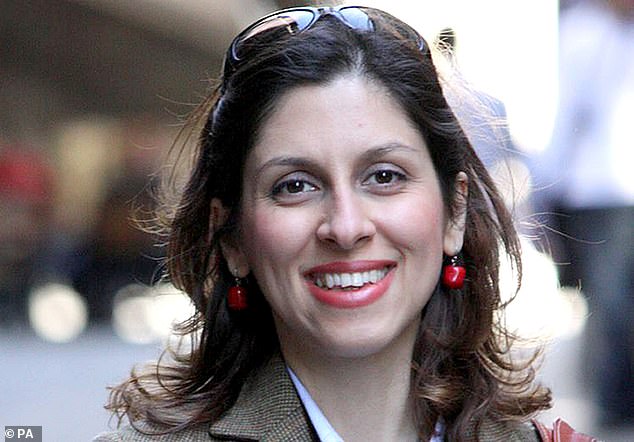 Ms Zaghari-Ratcliffe, a 41-year-old mother from London, is serving a five-year sentence after being arrested during a holiday with her daughter and accused of spying

Mr Ratcliffe is expected to ask Mr Johnson – who he has previously criticised over his handling of the charity worker’s situation – to take a personal interest in the case and treat it as ‘a priority’.

Ahead of the meeting, Mr Ratcliffe called on the PM to take responsibility after the comments he made when he was foreign secretary were blamed for worsening his wife’s plight.

Mr Ratcliffe told BBC Radio 4’s Today programme: ‘He needs to take responsibility for Nazanin’s case, for upholding the promise he made to us to leave no stone unturned.’

He urged Mr Johnson to be ‘brave’ in resolving a long-running trade dispute with Iran over the settlement of a £400 million debt.

He added: ‘Nazanin was told way back in 2016 she was being held over it. It has long been in the shadows of our case.

‘His (Mr Johnson’s) obligation is to protect British citizens. He needs to be brave in doing positive gestures in relation to the debt and other issues that will calm relations down, but also being brave in calling out Iran on hostage-taking. It is not an acceptable way to conduct diplomacy.’ 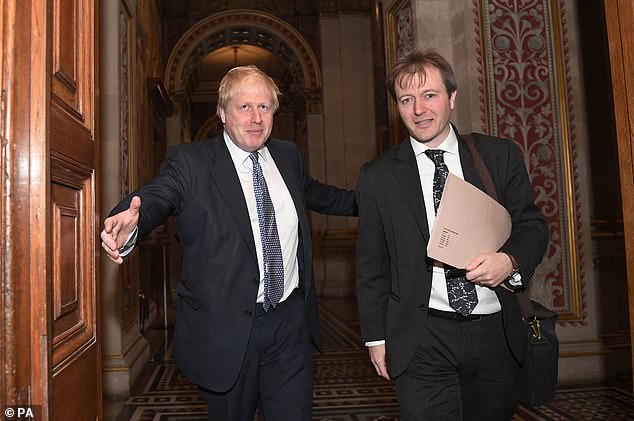 Mr Ratcliffe last met Mr Johnson when he was foreign secretary in 2017 (pictured, at the Foreign & Commonwealth Office in London) 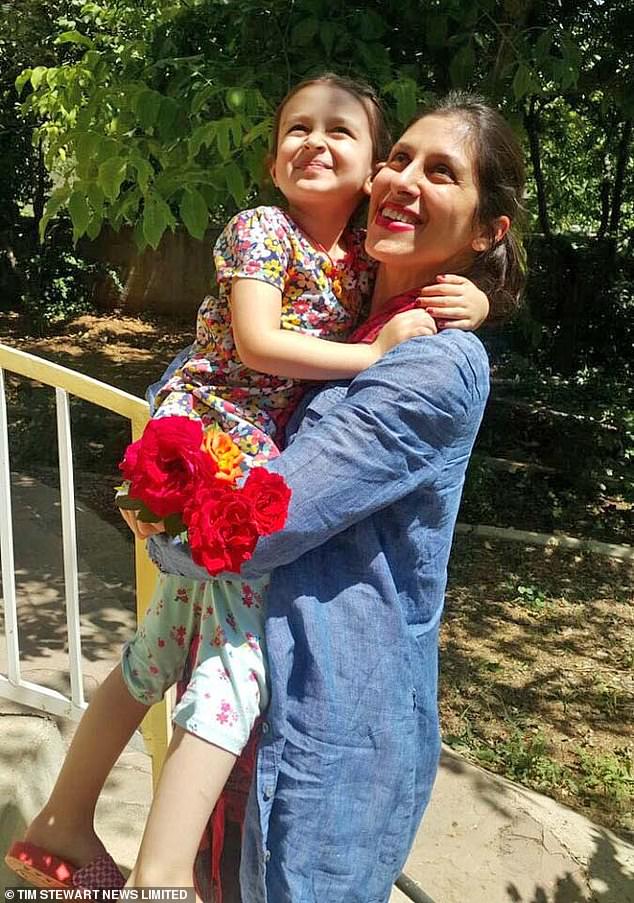 Ms Zaghari-Ratcliffe (pictured with her daughter) is among as many as five people with dual British-Iranian nationality, or with UK connections, believed to be in prison in Iran.

Ms Zaghari-Ratcliffe, a 41-year-old mother from London, is serving a five-year sentence after being arrested during a holiday with her daughter and accused of spying.

Her family and the UK Government have always maintained her innocence and she has been given diplomatic protection by the Foreign Office.

Diplomatic protection is a little-used mechanism the Government can use to attempt to help individuals it believes have been wronged by another state.

It raises Ms Zaghari-Ratcliffe’s treatment by Iran to become a formal state issue and recognises that the legal proceedings brought against her failed to meet international standards.

Mr Johnson has been persistently criticised for wrongly claiming, when he was foreign secretary, that she was training journalists at the time of her arrest.

Four days later she was summoned to an unscheduled court hearing during which Mr Johnson’s comments were cited as proof she was engaged in ‘propaganda against the regime’.

Ms Zaghari-Ratcliffe is among as many as five people with dual British-Iranian nationality, or with UK connections, believed to be in prison in Iran.

There are some hopes that diplomatic tensions could ease between London and Tehran if a long-running £400 million dispute is settled in the Court of Appeal this week.

Iran’s ambassador to the UK, Hamid Baeidinejad, tweeted that if a portion of the debt is assigned to Tehran then it will mean ‘the legal process of the case is coming to an end and there will be no excuse for default’ from the Government.

The sum has been outstanding since pre-revolutionary Iran paid the UK for 1,500 Chieftain tanks in the 1970s.

The deal was cancelled after the Shah of Iran was deposed in 1979, but Britain has refused to heed Iran’s demands to hand back the money.

Ms Zaghari-Ratcliffe’s local MP, Labour’s Tulip Siddiq, called on the Government to pay the sum back to Iran so that her constituent can be returned to the UK and reunited with her family.

Ms Siddiq said in the Commons: ‘This case relates to the £400 million that we owe Iran as a country, and anyone with a passing interest in my constituent’s case will know that the debt is linked to her imprisonment.

He said: ‘The British Government cannot and must not pay or appear to pay, either in fact or reality, money to allow people who have been illegally detained to be released.

‘The risk that would cause to other Britons travelling abroad would be very considerable.

‘The law must take its course in relation to the money which was deposited here, but it would be absolutely wrong to connect the two issues.’