Naturists have blasted police for arresting an elderly man who was walking through the countryside naked, insisting that the act was not illegal.

Officers arrested the man on suspicion of outraging public decency after receiving several reports of a naked pedestrian on Waldridge Fell in Durham on September 14 and 15. After police carried out enquiries he was released with no further action.

Durham Constabulary published a Facebook post reporting the arrest, but naturist group Three Rivers Outdoor Club criticised the force, saying the post falsely suggested that being naked in public was illegal – and did not mention any other reason for the arrest.

Police guidance says that passive public nudity is not illegal unless there is an intention to cause harassment, alarm or distress.

Three Rivers Outdoor, based in the North East, organises various naturist activities including countryside rambles and river dips across the region. Members said the Facebook post was ‘discriminatory’ and puts their members at greater risk of assault.

A spokesperson for the group said: ‘Our events are usually a liberating and joyful experience, but during one walk last summer, one of the ramblers had water thrown over them, whilst the assailant told the group that they shouldn’t be walking naked In public.

‘It is wrong for Durham Police to post misleading reports that suggest that public nudity is illegal, and it puts us at greater risk of harassment in future.’

The College of Policing says naturists only break the law if they ‘commit sexual offences or use disorderly behaviour that they intend to or are aware may be disorderly within the hearing or sight of a person likely to be caused harassment, alarm or distress’.

The Facebook post from Chester-le-Street Police said: ‘On Monday 14th and Tuesday 15th September we received a number of calls reporting a man walking around Waldridge Fell who was naked.

‘Officers attended and conducted searches on both days. Yesterday afternoon, PCSOs who were dispatched to assist with the search located a naked man matching the description on the fell. The PCSOs detained the man until a police officer attended the location and arrested him.

‘The man was subsequently taken to custody and has since been helping officers with enquiries.’

After carrying out their enquiries the man was subsequently released with no further action.

The spokesperson for the group said that although these incidents are ‘rare’ it’s even more important to raise awareness.

He added: ‘I’ve been a naturist for 30 years and during that time one person came up to me and shouted abuse at me.

‘These incidents are very rare but we want to get this message out there so there’s a greater understanding. 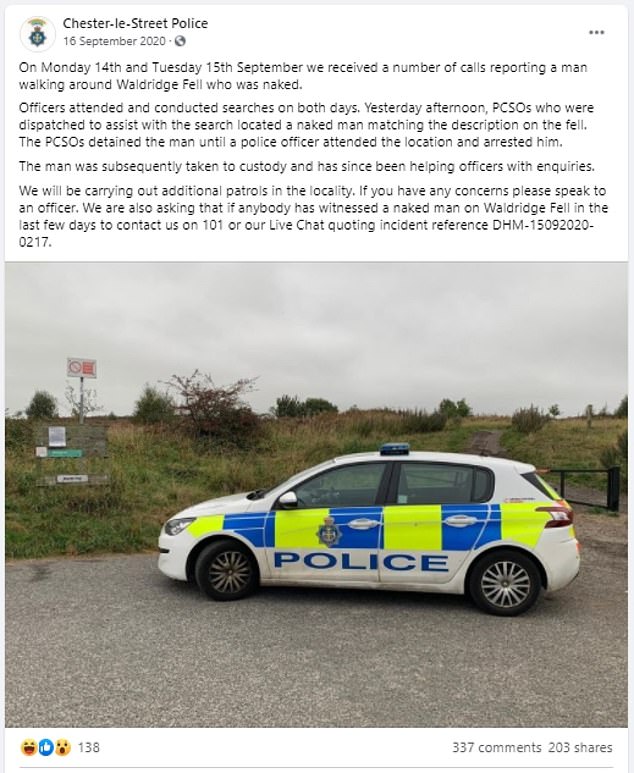 The post from Chester-le-Street Police said: ‘On Monday 14th and Tuesday 15th September we received a number of calls reporting a man walking around Waldridge Fell who was naked’

‘It’s a really liberating experience to get out in nature and to get out and see our stunning countryside.

‘Part of it is the social side and you get to see the same people who come to the pool and we can just meet and talk about football.

‘We’re like a small social club for people with similar interests.’

The naturist group said Durham Constabulary refused to change the post and said the Professional Standards department would not register a complaint about the post being discriminatory.

Durham Constabulary said they use Facebook to communicate with the community and reassure them about their concerns.

A spokesperson for the force said: ‘We received several calls from members of the public reporting an elderly man walking naked on Waldridge Fell on September 14 and 15, who was later identified and arrested on suspicion of outraging public decency.

‘Following a medical assessment, it was considered that it was not in the public interest to pursue the matter and he was subsequently released with no further action.

‘Over recent years, there have been several sexual and public order incidents reported on Waldridge Fell, which have led to concerns from local residents and councillors.

‘We often use Facebook as a means of communicating with our residents and to inform them of issues that are relevant to their area.

‘This particular post was uploaded to reassure the local community, and to show them that we are taking their concerns seriously.’