NATO summits are less awkward now that Joe Biden has taken over from Donald Trump as president, the Netherlands’ prime minister said as members of the alliance met in Brussels today.

Mark Rutte said meeting with Biden is ‘more natural’ as he arrived in Brussels for talks, adding that he understands ‘the necessity of NATO.’ His sentiment was echoed by Italian PM Mario Draghi who said the alliance is ‘rebuilding’ after years of ‘undecided’ policy from Trump.

Summits with Trump has frequently devolved into in-fighting as he pressured leaders to spend more on the alliance, questioned its purpose, showed up late, blew off meetings and on one occasion stormed out early.

Biden kicked off the summit by committing the US to NATO’s mutual defence pact – calling it a ‘sacred obligation’ – in an early break from Trump who notoriously prevaricated when asked if he would do the same back in 2017.

Leaders were also expected to expand the terms of Article 5 to including both cyber attacks and attacks on space satellites, saying an assault on either will be considered an attack on all 30 nations.

Meanwhile NATO chief Jens Stoltenberg said the alliance is ready to open ‘a new chapter’ with Biden ‘at a pivotal moment’ in its history. It comes after the G-7 meeting of ministers in the UK last week, and ahead of Biden’s first summit with Putin later this week.

Biden is also expected to hold talks with President Erdogan on the sidelines of the NATO summit, as one image appeared to show the Turkish leader kissing Biden’s hand – though it was only a trick of perspective.

Joe Biden met with Tayyip Erdogan for talks on the sidelines of NATO’s summit in Brussels today, with the two men greeting each-other with what at first appeared to be a kiss on the hand – though this was only a trick of perspective 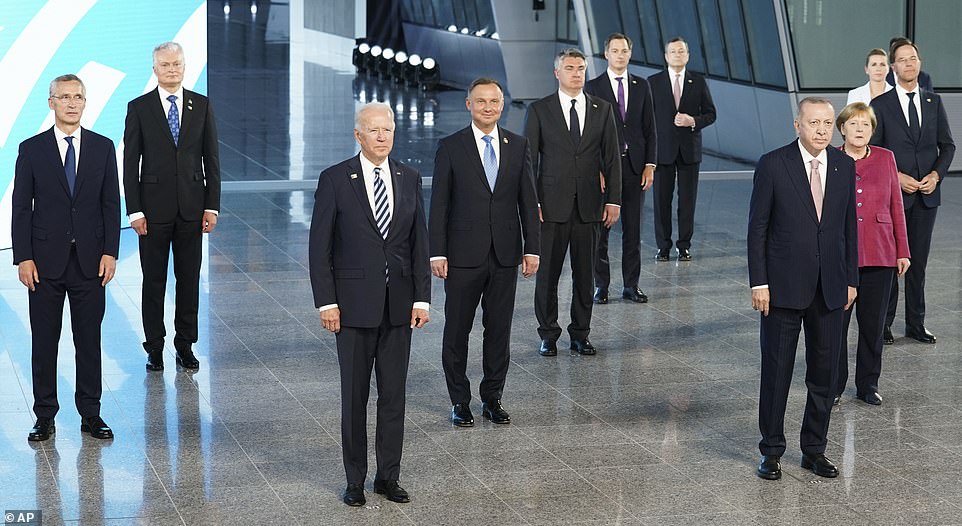 Biden kicked off the summit by committing the US to NATO’s mutual defence pact, saying he views it as a ‘sacred obligation’ in a break from Trump – who notoriously refused to commit to the pledge 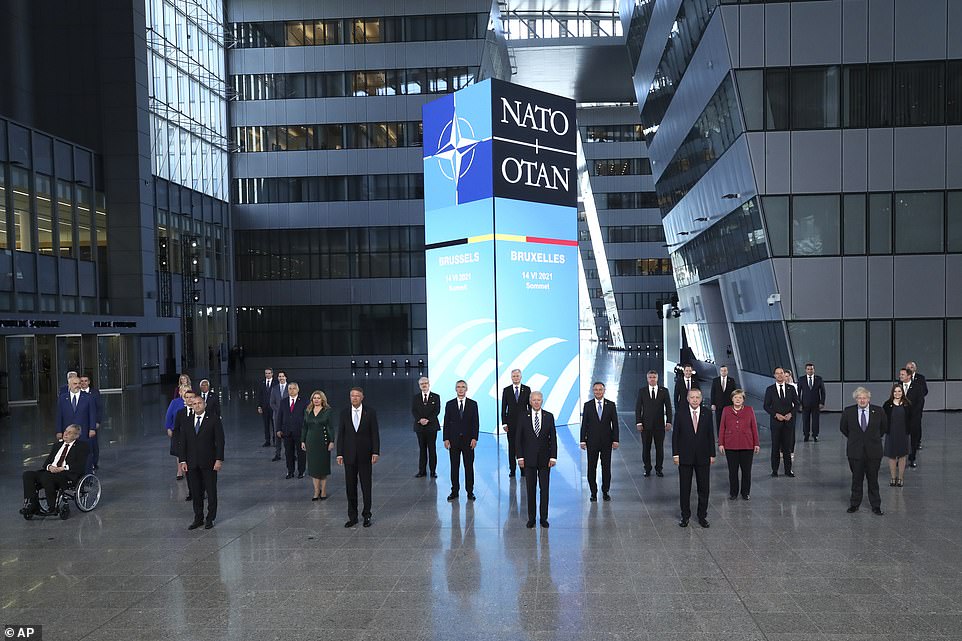 Biden is attempting to rally his allies ahead of his first meeting with Vladimir Putin in Geneva later this week, as relations between the two countries plunge into the deep-freeze 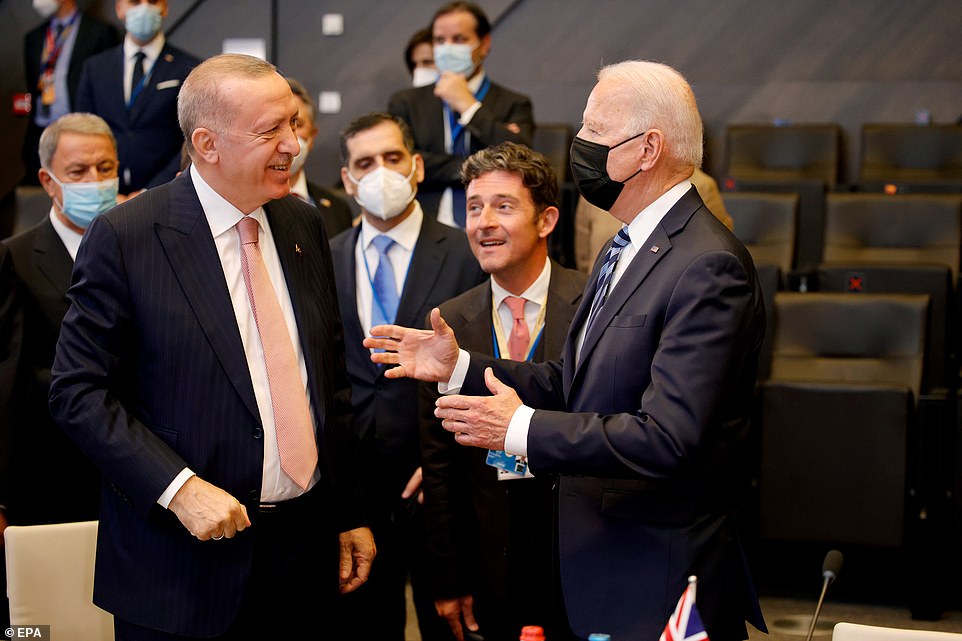 Erdogan was rising out of his chair when Biden offered him a fist-bump which he reciprocated, though for a moment and at the right angle it appeared the Turkish president was kissing Biden’s hand

In fact, Erdogan was getting out of his chair when Biden offered him a first-bump – a gesture he reciprocated while only halfway out of his seat.

Biden has known Erdogan for years but their relationship has frequently been contentious. During his campaign, he drew ire from Turkish officials after he described Erdogan as an ‘autocrat.’

In April, Biden infuriated Ankara by declaring that the Ottoman-era mass killing and deportations of Armenians was ‘genocide’ – a term that U.S. presidents have previously avoided using. 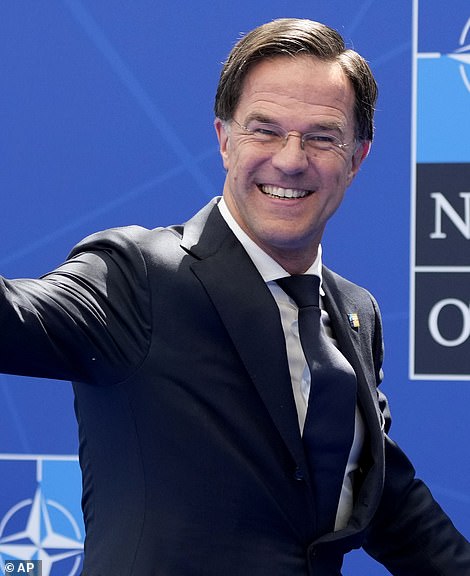 Dutch PM Mark Rutte was keen to draw a line under the Trump era, saying relations are ‘more natural’ with Biden

The two leaders were expected to discuss Syria and Iran as well as what role Turkey can play on Afghanistan following U.S. withdrawal, according to the White House.

Also on the agenda: how Washington and Ankara ‘deal with some of our significant differences on values and human rights and other issues,’ White House national security adviser Jake Sullivan said.

The unsettled security situation in Libya, as well as overlapping concerns on China and Russia are also expected to be discussed.

Biden is attempting to rally his allies as he takes a tough line on both China and Russia in the early days of his presidency. In two days, he will fly to Geneva for his first meeting with Vladimir Putin since becoming president.

Throwing his weight behind the alliance, he told European leaders: ‘Article 5 we take as a sacred obligation. I want NATO to know America is there.’

Article 5 of NATO’s founding treaty states that attack on any one of the 30 allies will be considered an attack on them all.

So far, it has only applied to more traditional military attacks on land, sea, or in the air, and more recently in cyberspace.

‘I think it is important (with) our Article 5, which states that an attack on one will be regarded as an attack on all, that we all will respond,’ Stoltenberg said, at a German Marshall Fund think tank event.

‘We will make it clear at this summit that, of course, any attack on space capabilities like satellites and so on or attacks from space will or could trigger Article 5.’

Around 2,000 satellites orbit the earth, over half operated by NATO countries, ensuring everything from mobile phone and banking services to weather forecasts. Military commanders rely on some of them to navigate, communicate, share intelligence and detect missile launches.

In December 2019, NATO leaders declared space to be the alliance’s ‘fifth domain’ of operations, after land, sea, air and cyberspace. Many member countries are concerned about what they say is increasingly aggressive behavior in space by China and Russia. 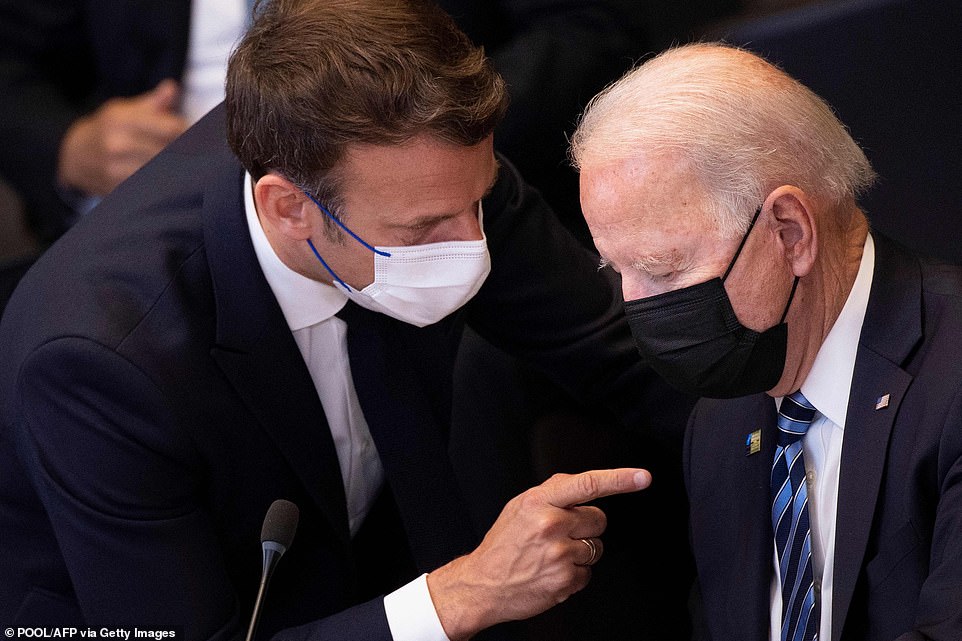 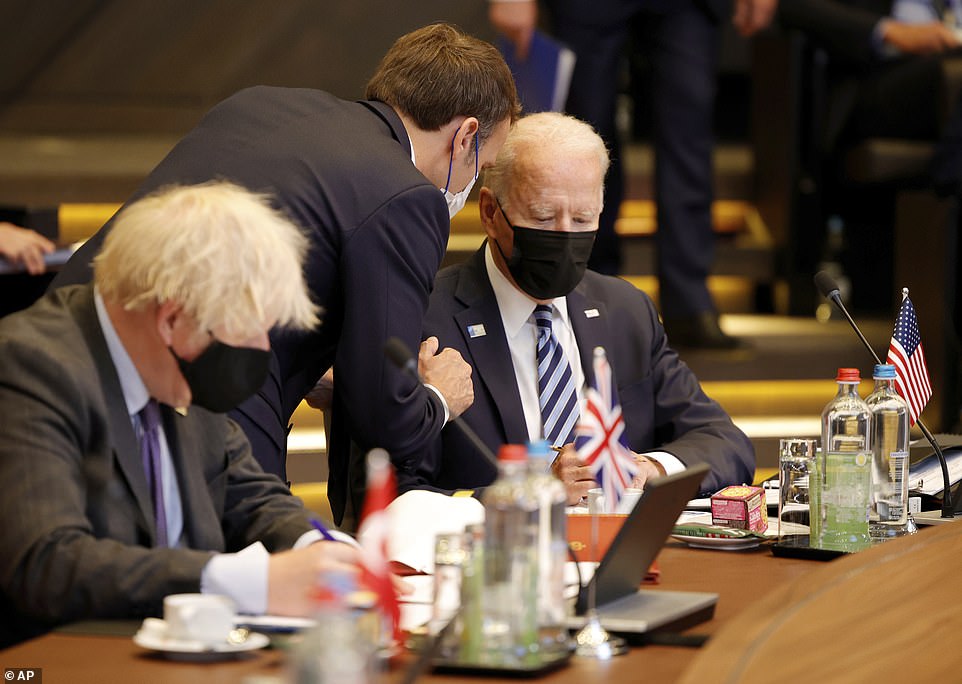 Boris Johnson (left), Emmanuel Macron (centre) and Joe Biden (right) are seen ahead of the NATO summit in Brussels today 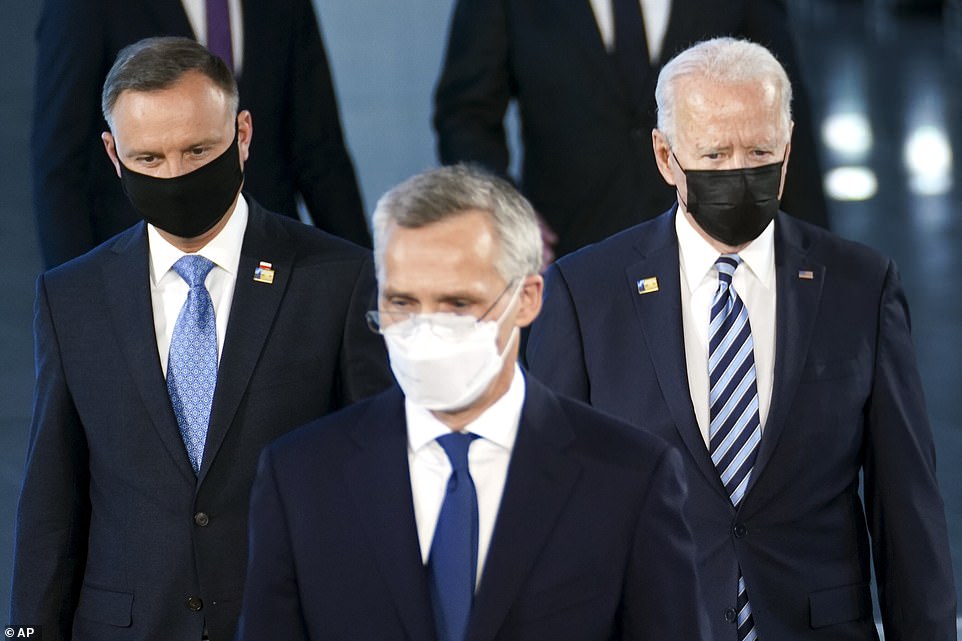 NATO chief Jens Stoltenberg (centre) pledged a ‘new chapter’ for the alliance under Biden, which he said comes at a ‘pivotal’ moment in its history (pictured left, Polish president Andrzej Duda) 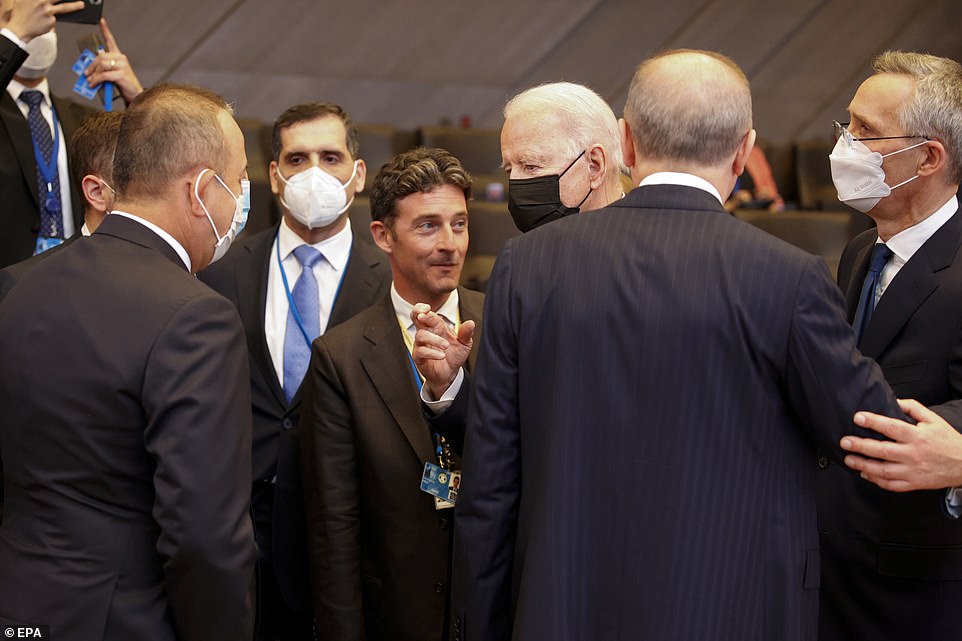 A communique is also expected to be issued after the summit has finished that will be signed by all members, and is expected to include updates to Article 5 to including mutual defence in the event of cyber attacks.

If an alliance member needs technical or intelligence support in response to a cyber attack, it would be able to invoke the mutual defense provision to receive assistance.

The president started his day meeting with leaders of the Baltic states on NATO’s eastern flank regarding the ‘threat posed by Russia,’ China and the recent air piracy in Belarus, according to Sullivan.

The White House added: ‘The leaders committed to further strengthening our political, military, and economic partnerships, including working together through NATO to address challenges posed by Russia and China.’

Meanwhile French President Emmanuel Macron tweeted that he wants to ‘move forward’ with Turkey toward a demanding and respectful relationship, after meeting with the country’s President Recep Tayyip Erdogan.

Both men talked Monday on the sidelines of the NATO summit in Brussels. It was their first meeting since the dispute between the two countries reached its peak in October after Erdogan questioned Macron’s mental health.

Macron said he wants all NATO allies to make a clear commitment to the military organization’s values, principles and rules, according to the French presidency.

Both men discussed Libya and Syria issues, the Elysee said. Macron has notably accused Turkey of flouting its commitments by ramping up its military presence in Libya and bringing in jihadi fighters from Syria.

Macron also highlighted that France’s secularism respects all religions, including Islam. The French presidency said a ‘clarification’ was needed in response to Erdogan’s tough criticism of Macron’s attitude toward Islam and Muslims, as the French government proposed a law to fight Islamist radicals.

British Prime Minister Boris Johnson added that NATO leaders do not see China as an adversary in the same way that they view Russia, but that they must come to terms with the Asian giant’s growing influence.

Johnson told reporters at a NATO summit in Brussels Monday that China is ‘a gigantic fact in our lives and a new strategic consideration for NATO.’

He says ‘I don’t think anybody around the table today wants to descend into a new Cold War with China.’

He says the leaders of the 30-nation alliance ‘see challenges, they see things that we have to manage together, but they also see opportunities, and I think that what we need to do is to do it together. 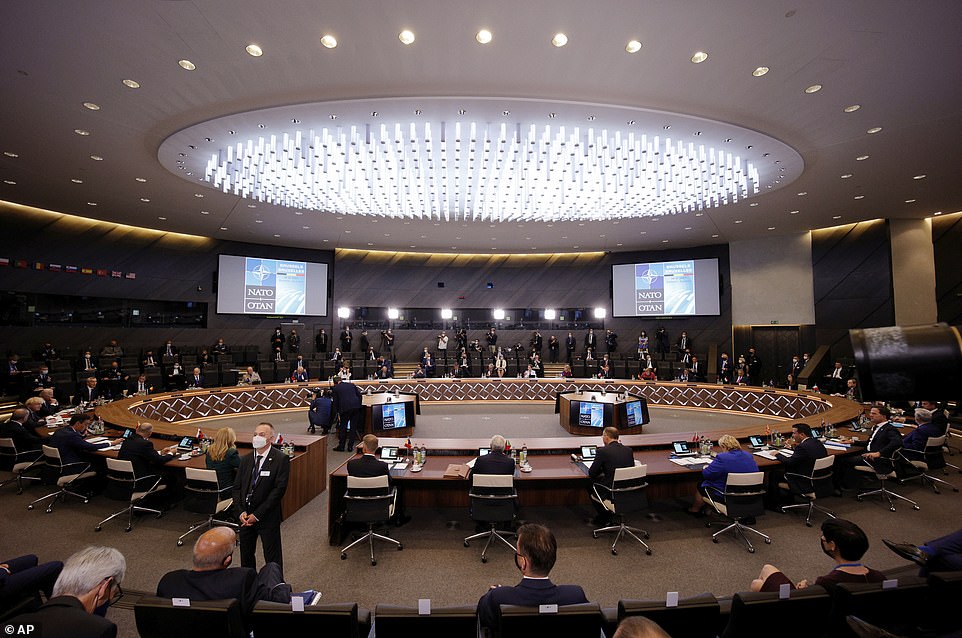 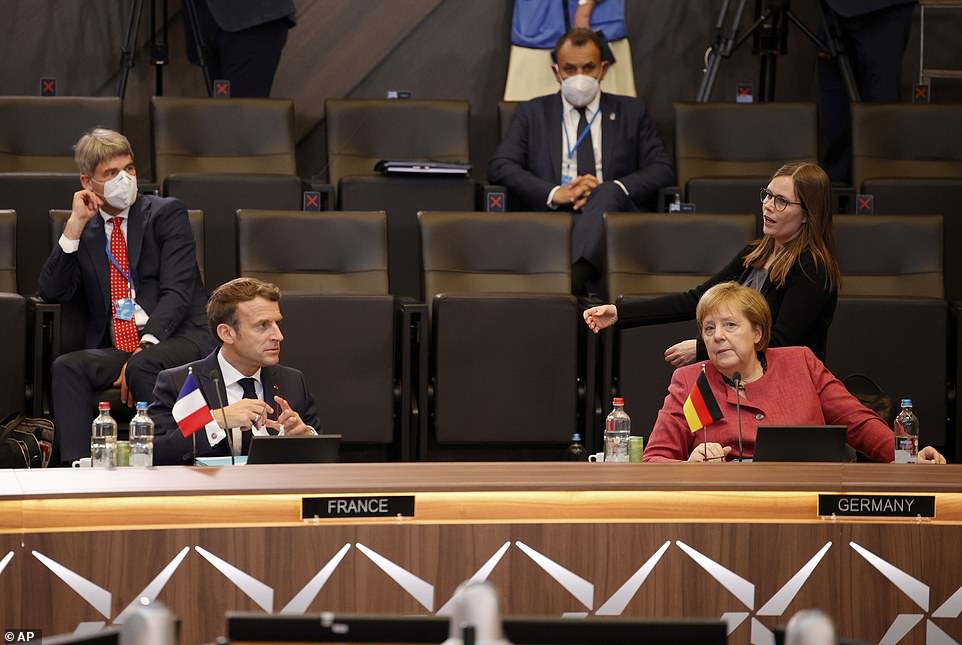 The NATO summit also comes on the tail of the G7 meeting that took place just a few days prior in the UK.

At the G-7, leaders sought to convey that the club of wealthy democracies – Canada, France, Germany, Italy, Japan, the United Kingdom and the United States – is a better friend to poorer nations than authoritarian rivals such as China and Russia.

The G-7 meeting ended with a communique that called out forced labor practices and other human rights violations impacting Uyghur Muslims and other ethnic minorities in the western Xinjiang province.

The president declined to discuss private summit negotiations over the provision, but said he was ‘satisfied’ with the communique, although differences remain among the allies about how forcefully to call out Beijing.

Biden is focused on building a more cohesive bond between America and allies who had become wary of U.S. leadership after enduring four years of Trump’s name-calling and frequent invectives about the relevance of NATO.

Trump complained that the NATO alliance allows ‘global freeloading’ countries to spend less on military defense at the expense of the U.S. and dismissed the alliance as ‘obsolete.’

Biden offered a pointed rejoinder on Sunday, saying: ‘We do not view NATO as a sort of a protection racket. We believe that NATO is vital to our ability to maintain American security for … the remainder of the century. And there’s a real enthusiasm.’

Trump lashed out after Trudeau was caught on a hot mic gossiping with other leaders about Trump turning photo opportunities into long news conferences.

Ahead of the summit, Macron had declared NATO ‘brain dead’ because of a void in U.S. leadership under Trump.

Biden has already acknowledged during his Europe tour that the alliance needs to ensure better burden sharing and needs more American leadership.

He’s also highlighted NATO members’ contributions in the war in Afghanistan, noting that ‘NATO stepped up’ after America was attacked on Sept. 11, 2001.

The U.S. and NATO are winding down their involvement in the nearly 20-year war that killed tens of thousands of Afghans and more than 3,500 U.S. and allied troops.

The war also raised profound questions about whether NATO’s most ambitious effort was worth it.

For now, NATO plans to leave civilian advisers to help build up government institutions. It’s unclear who will protect them.

The alliance is also weighing whether to train Afghan special forces outside the country.

NATO members are also expected to endorse the creation of a new cyber defense policy to improve coordination with countries impacted by the increasing frequency of ransomware attacks.

That will come alongside a climate security action plan to reduce greenhouse gases from military activities in line with national commitments under the Paris agreement and a commitment to strengthen NATO’s deterrence to meet threats from Russia and elsewhere, according to the White House.