The National Trust has been condemned online after using plastic trees to promote its campaign urging Britons to celebrate the blossom season.

Britons took to Twitter to slam the heritage body after it emerged that the Trust’s #BlossomWatch campaign was being promoted on faux trees on London’s New Bond Street.

Posters which read ‘Join a celebration of the blossom season’ alongside its ‘#BlossomWatch’ hashtag were seen fitted to the bottom of the fake cherry blossom trees.

The trees are being used despite the Trust telling Britons on its website about ways to ‘join us in the fight against plastic’.

One Twitter user branded the decision to use the trees as an ‘epic fail’, while another said it was ‘so disappointing’ as they pointed out: ‘We don’t need more plastic pollution’.

However, whilst they admitted the trees are ‘artificial’, the Trust said in response to the flurry of tweets that they were supplied by a ‘carbon neutral company.’

They added that they were ‘pleased’ to get the opportunity to raise money for their  push to plant 20milion trees in Britain by 2030.

The flurry of criticism came after one Twitter user posted photos of the fake trees on Tuesday.

Others quickly piled in to join in the criticism.

One wrote: ‘Epic fail! What were you thinking @nationaltrust ?!!

‘It’s all very well saying it’s a way of promoting fundraising to plant real trees, but promoting a company that makes plastic trees in doing so? Am I missing something?’

Another said: ‘We don’t need more #plasticpollution @nationaltrust What an appalling example for other plastic polluters to follow. So disappointing… #ClimateEmergency #ecocide’

A third wrote: ‘Why on earth is @nationaltrust celebrating #blossomwatch with PLASTIC blossom?????

‘How hard to use a real tree which won’t litter the environment for 100 years?’

Responding, the Trust said in their own tweets that, whilst the trees were artificial, they’re ‘as sustainable as possible’.

They said the trees are supplied by firm Twilight Trees, who boast on their website about being ‘experts in all things faux tree related’.

MailOnline has approached the company for commment.

Another critical Twitter user pointed out: ‘The National Trust are completely missing the point with #BlossomWatch.

‘Wheres the joy in a never changing plastic representation of a flower?

‘The beauty is in the measure of time as buds become blossom and then into fruit, and all the life that that attracts.’

The message on another of the tree pots read: ‘Text PLANT to text £5 and donate a real tree for future generations to enjoy’.

The Trust is using the trees even though it has a guide on its website which explains how Britons can use less plastic.

It reads: ‘We all have a special connection to forests, rivers and beaches, but the places we love and the animals that live there are threatened by plastic pollution.’

The guide notes the Trust’s previous measures to combat plastic waste, including its commitment to stop selling single-use plastics by 2022. 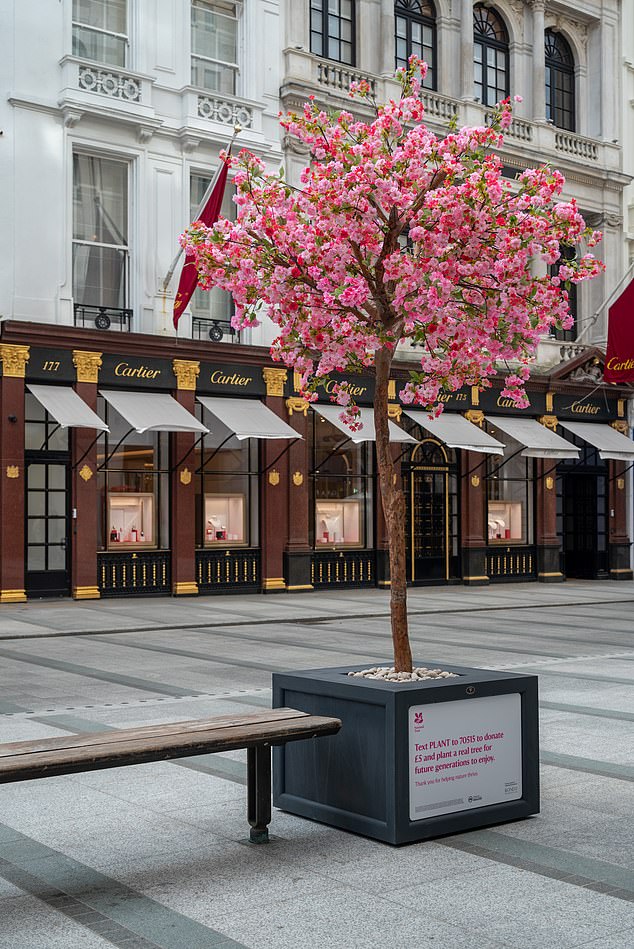 Whilst they admitted the trees are ‘artificial’, the Trust said in response to the flurry of tweets that they were supplied by a ‘carbon neutral company.’

They said they have also banned plastic bags in 275 of their shops.

They added on the page: ‘Work with us to stop the tide of plastic waste from overwhelming precious landscapes and vulnerable wildlife.

‘Every single piece of plastic ever created still exists in some form today, and a huge amount of it is choking oceans and washing up on shores.’

The message finished by admitting that ‘kicking the plastic habit isn’t always easy’.

The organisation launched its blossom campaign in March. Thousands of Britons have responded by sharing their own photos of blossom.

A National Trust spokeswoman said of the campaign: ‘As restrictions ease and loved ones can finally start to meet outside, the conservation charity is urging people to use the easing of restrictions to share in one of nature’s most magnificent natural spectacles.

‘The recent topsy-turvy weather – with plunging temperatures of up to minus five at night and some areas experiencing snowfall – has given this year’s blossom an uncertain start but it is expected to reach its peak in the coming days and weeks.’