Britain’s National Grid has started constructing its ‘Viking Link’ – an interconnector system that will allow the exchange of electricity between Denmark and the UK.

The undersea cable will stretch 475 miles between Lincolnshire in England and South Jutland in Denmark, allowing clean energy to be shared between the nations.

The 1.4 gigawatt high-voltage electricity interconnector will be the longest in the world when completed, National Grid said.

Once completed by the end of 2023, the £1.7 billion cable will have the capacity to be able to supply renewable energy to power 1.5 million UK homes.

Viking Link will also play a ‘vital role’ in helping to shift the UK’s power supply away from carbon-generating sources, such as coal-fire power stations.

The UK government is aiming to deliver on a legally-binding agreement to reach net zero greenhouse gas emissions by the year 2050.

By 2030, 90 per cent of electricity imported via National Grid’s interconnectors will be from zero carbon sources.

The construction phase of the Viking Link Interconnector project, a high-voltage direct-current (HVDC) link between the UK and Denmark, has commenced in Lincolnshire

‘We’ve already completed the initial groundwork with archaeological and ecological surveys as well as water works studies – however, this is a key construction milestone for the project,’ said Mike Elmer, Viking Link project director for National Grid Ventures.

‘It will enable access to a cleaner greener supply of electricity, which will make energy more secure and affordable for consumers.’ 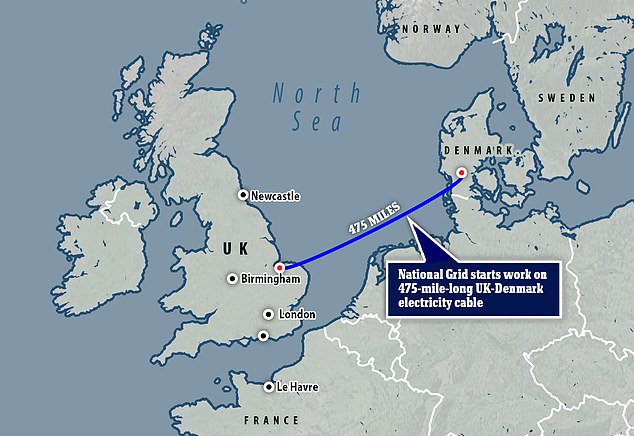 Electrical interconnectors are high-voltage cables that connect the energy networks of neighbouring countries.

They allow excess energy, sourced from wind and solar farms in especially windy and sunny weather or hydroelectricity, to be traded and shared between nations, even if they’re separated by sea.

These interconnectors reduce waste and enables a cleaner, more efficient power system, according to the National Grid.

The first stage of building Viking Link, which involves creating a 1.5-mile-long access road for a converter station that will be sited in Bicker Fen, Lincolnshire, has started this month. 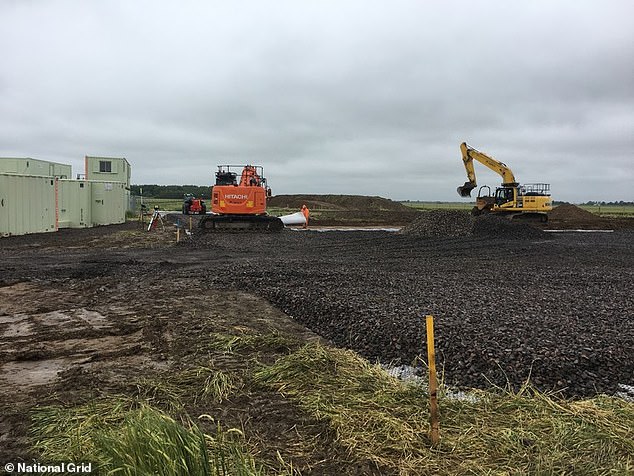 Siemens Energy was appointed to construct the UK and Denmark converter stations on both ends of the interconnector link. UK-work has started to build a new access road to the site (pictured). The permanent road will take nine months to complete and will enable access for the major construction equipment to the converter station and for operational vehicles to access the site once the converter station is completed in 2023

The permanent road, which will take nine months to complete, will initially enable access for transporting major construction equipment to the site.

At a later date, when the converter station has been completed, it will be used by operational vehicles.

Viking Link is a joint venture between National Grid Ventures, part of National Grid, and the Danish electricity system owner and operator, Energinet.

German conglomerate Siemens is set to construct the British and Danish converter stations on both ends of the interconnector link. 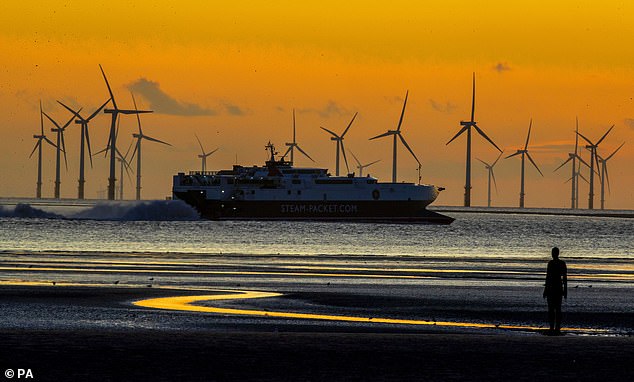 At the Lincolnshire end of the construction process will be a burst of ‘green-collar jobs’ created for the next three years at least, according to Kwasi Kwarteng, Minister for Energy and Clean Growth.

Solar – light and heat from the sun.

Tidal – energy from the rise and fall of sea levels.

Geothermal – energy generated and stored in the Earth.

‘This major construction project will put Lincolnshire firmly at the heart of our economic recovery,’ he said.

‘Not only will this scheme create local green-collar jobs across the county, but it will also bolster our energy security, reduce bills for consumers, and give our home-grown renewable generators a greater chance to export zero-carbon electricity around the world.’

Matt Warman, MP for Boston & Skegness, said reducing carbon emissions is one of the biggest challenges facing faced by humanity.

‘It is great to hear that this project will create employment opportunities to the local community and look to procure products and services from local companies throughout the project.’

Britain is steadily turning away from carbon-belching sources of energy generation – most notably coal and gas.

Last month, Britain’s record-breaking stretch run without coal-fired power came to an end after 67 days, 22 hours and 55 minutes since April 9.

The coal-free run ended on June 16 due to a coal power unit running tests after essential maintenance at Drax power station in north Yorkshire, which added some power to the grid.

By the time it ended, the coal-free run had far outstripped the previous record for the length of time Britain had gone without the fossil fuel – 18 days, 6 hours and 10 minutes, set in June last year. 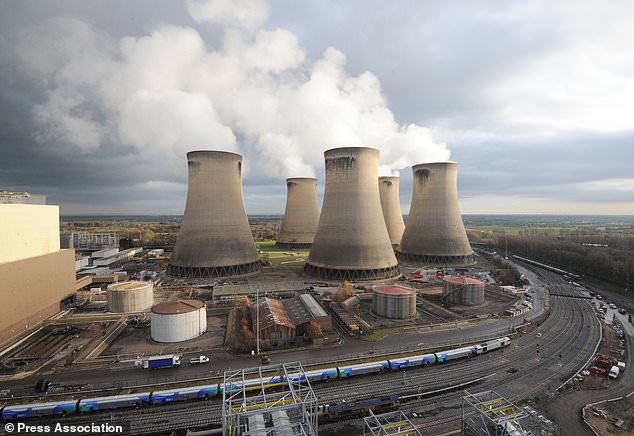 This new record is the longest period the British grid has gone without electricity from coal since 1882, during the Industrial Revolution.

In recent months, lockdown measures have seen a drop in power demand, while increasing levels of renewables have helped squeeze out coal.

Over the period of the coal-free run, renewables made up the biggest share of the mix, generating nearly 36 per cent of power, while gas provided around 33 per cent, and nuclear 21 per cent, analysis by climate website Carbon Brief shows.

Power generation from both brown coal and hard coal are both down more than 40 per cent over the past month compared with last year, due to the costs involved, the website reported back in April.

Europe has seen a rise in more environmentally-friendly forms of power generation, including wind and solar.

WHAT ARE THE UK’S PLANS FOR ‘NET ZERO’ CARBON EMISSIONS?

However, experts are concerned over how the proposals will work.

The report commits to ensuring that the emissions generated by the UK are offset by removing the same amount of carbon from the atmosphere.

There are two main ways this can be achieved – by planting more trees and by installing ‘carbon capture’ technology at the source of the pollution.

Some critics are worried that this first option will be used by the government to export it’s carbon offsetting to other countries.

International carbon credits let nations continue emitting carbon while paying for trees to be planted elsewhere, balancing out their emissions.

Some argue that the scheme is a way for developed nations to shirk their environmental obligations, by passing them to poor and developing countries.