National Geographic magazine’s editor Susan Goldberg has been mocked online for adding ‘white, privileged, with much to learn’ to her email signature.

Goldberg added the words on a June 6 newsletter emailed to readers, which invited them to participate in the magazine’s Race Card Project, which sees those featured sum up their experience with race in six words.

‘These aren’t just binary conversations about Black and white people,’ reads Goldberg’s letter. ‘This “quilt,” as she describes it, pulls at all manner of cultural threads, from Latinos and Indigenous people to Asians and Iranians.’

‘So, what’s my race card?’ Goldberg continues. ‘This is a hard exercise, but reflecting on the difficult past year, on our fraught politics, and so many frank conversations I’ve had with friends and colleagues, for now I’ll leave it at this: “White, privileged, with much to learn.” ’

‘America surely has the most insufferable elite,’ wrote conservative writer Rod Dreher in a Twitter post with a screen grab of the letter. His tweet has since garnered 7,336 likes, 1,175 shares and 766 comments.

‘If she’s ashamed of her race, her class, and her ignorance, maybe she should resign,’ replied Geoffrey Miller, a psychology professor and writer, to his post and Twitter user Barrington Martin II, a former Atlanta congressional candidate, simply commented, ‘cringeworthy.’

National Geographic editor-in-chief Susan Goldberg was mocked on social media for having the email signature, ‘white, privileged, with much to learn’ 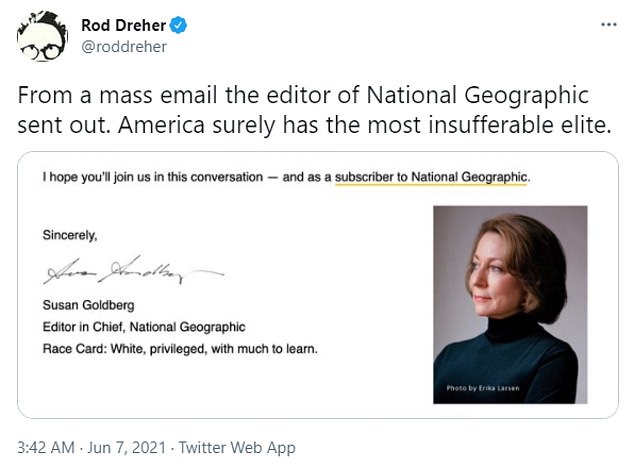 Other users agreed in a thread that spans over 700 comments

A number of Race Card Project entries are shared on Twitter and all have evoked outraged tweets from mostly conservative outlets and readers threatening to cancel their subscription.

Perhaps the most criticized was a portrait of a white woman from Arkansas with the caption, ‘I am ashamed of my ancestor’s race.’ One user wrote ‘I doubt they’re thrilled with her either’ and another wrote ‘I’m ashamed of NatGeo for publishing this story.’

A tweet explaining the post in the same thread reads, ‘Lindsey Lovel Heidrich was born in Arkansas and her ancestors ran a small plantation in Georgia and owned slaves. “When I try and bring things up, or I try and criticize the south, you know, it’s never gone over great with my family,” [she said]. ’

Another Race Card Project post shows a young, black man with the caption, ‘Black boy. White world, Perpetually exhausted.’ The tweet drew hundreds of appalled comments mocking the man in the photo and the idea that the world is ‘white.’

A following tweet reads, ‘After a frightening encounter with police right before entering college, Esayas Mehretab decided not to tell his parents, who had fled persecution in Ethiopia. But he discovered that keeping quiet about these challenges takes a toll.’

Another shows a mixed-race woman with the caption, “I am not an exotic creature.’ The following tweet explaining the caption reads, ‘Hana Peoples said the constant guessing game about her identity, as well as the harassment and unwanted attention she’s received from “creepy men,” makes her feel like a specimen. Her six-word story was born of exasperation.’

Writer Michele L. Norris began pursuing the Race Card Project on her own over a decade ago and National Geographic recently brought her own as a storytelling fellow to continue her work. So far, she has included entries from 500,000 people from 100 countries and territories.

The Race Card Project is one of the most recent efforts made by National Geographic to discuss racism and expose injustice. But many see it as ironic considering the magazine’s past.

National Geographic was first published in 1888, but has recently come under fire for treating non-white cultures and native people with what critics say is neo-colonialist disdain. One example that has since been widely shared featured a 1916 issue on Australia referred to the indigenous people of the continent as ‘savages’ who ‘lacked intelligence.’

Susan Goldberg spoke of her desire to make amends over criticism by publishing the magazine’s Race Issue in April 2018.

She tapped University of Virginia professor John Edwin Mason to examine the magazine’s archives and pinpoint what it could have done differently.

But many left-leaning sources and Twitter users found the magazine’s attempts to emerge from its racist past as being tone deaf and superficial. Vaxton Hartnabrig, of NPR’s Code Switch, wrote that the magazine recognizes that race is ‘socially constructed,’ but acts like its coverage of that means that racism ‘could just be waved away.’

National Geographic has also responded to criticism over its racial imbalances by announcing a plan to boost inclusion, and creating a residency program aimed at giving young journalists of color a foot on the latter.