NASA has revealed a stunning mosaic of fake space images used to train its astronomical algorithms – but has hidden within it is a single image of a genuine cosmic marvel.

The mosaic below consists of 225 images, 224 of which are fake, created by artificial intelligence (AI). But one shows a real interstellar phenomenon, taken by NASA’s Hubble Space Telescope.

NASA uses computer algorithms to crunch digital images of the real night sky taken by robotic telescopes, in order to find stars and galaxies and measure their properties.

This mosaic consists of 225 images, 224 of which are fake. One is real – but can you spot which one? If you’re having trouble finding it, MailOnline reveals the answer below

But to calibrate these algorithms, it is useful to test them on fake images of fake universes.

NASA said: ‘Why would you want to fake a universe? For one reason – to better understand our real universe.

‘The featured mosaic of fake images was created to specifically mimic the images that have appeared on NASA’s Astronomy Picture of the Day (APOD).’

A new Twitter bot account and webpage are posting regular photos of these fake Astronomy Picture of the Day, AI-generated shots, which range from murky splodges to impressively realistic panoramas. 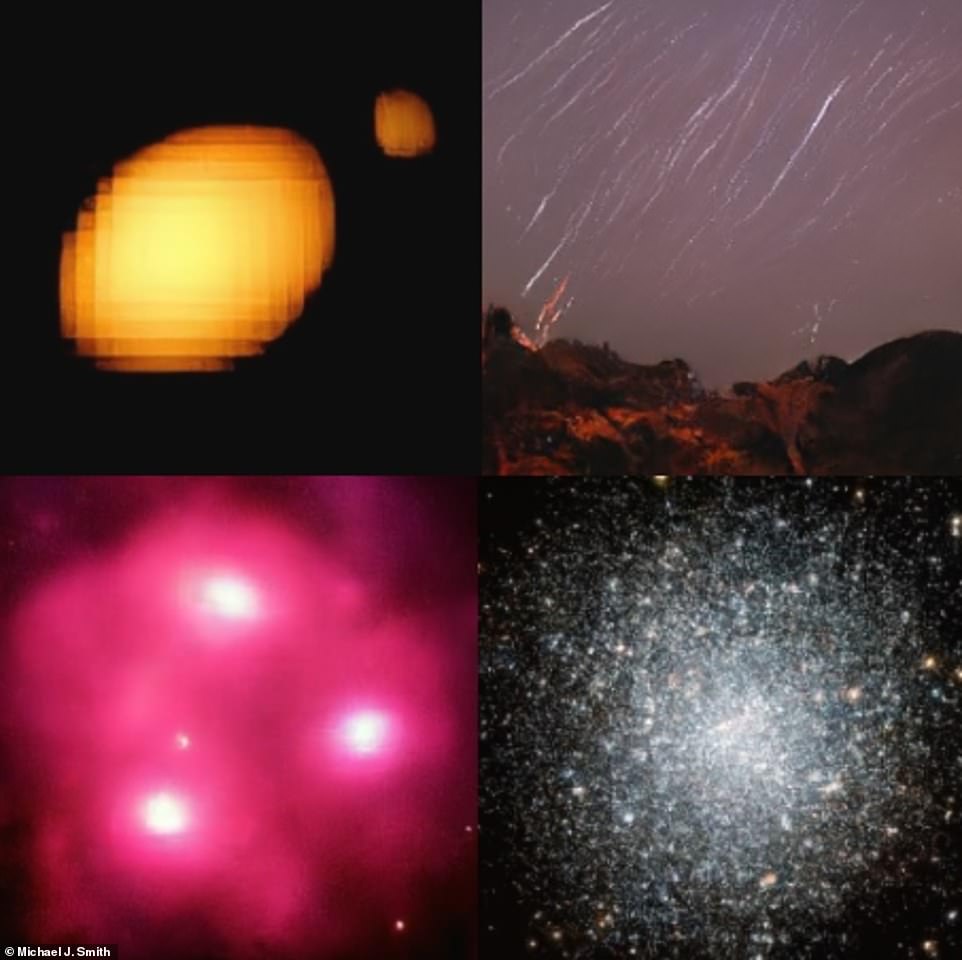 Pictured are four fake, AI-generated space images. Michael J. Smith, a PhD student at the University of Hertfordshire behind the project, said: ‘Top left looks a bit like a galaxy (distant perhaps since it is pixelated); top right is a landscape with star trails (like you get in a long exposure shot), bottom left looks to be some sort of nebula, and bottom right is a globular cluster’

Michael J. Smith, a PhD student at the University of Hertfordshire, is behind the project, which is called ‘This Is Not An APOD’.

Smith told MailOnline that there are around 700 pictures on the This Is Not An APOD webpage, and around 3,000 ready to go for the Twitter Bot – meaning there are tens of hundreds that aren’t included in NASA’s mosaic.

Creating fake images of cosmic phenomena using AI is also the subject of a new pre-print research paper led by Smith. The technique is based on a score-based generative model, a type of AI that can produce high quality image samples.

But did the AI have you fooled? In case you’re still searching for the only real image and you’re not quite ready for spoilers, it’s circled in red below. 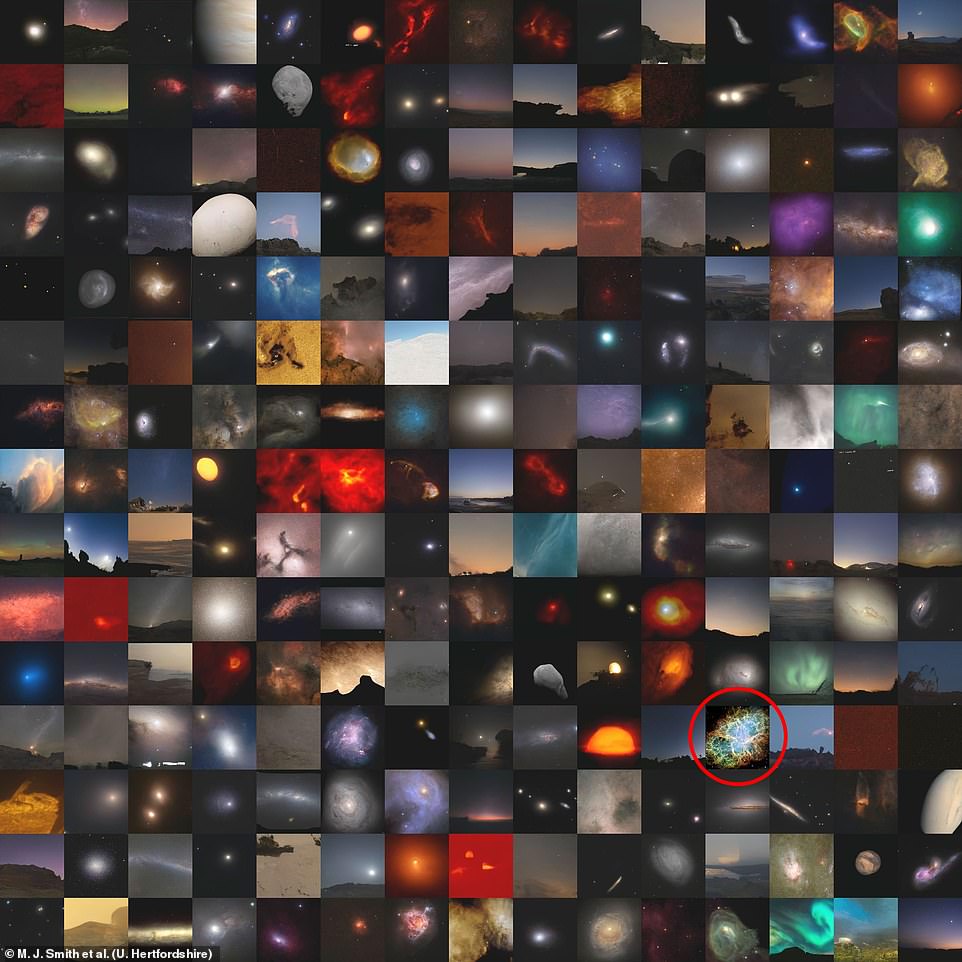 Did you spot it? The only real image in the mosaic shows the Crab Nebula, a nebula located 6,500 light-years from Earth in the constellation Taurus. All the others are fake

The real image actually really sticks out when you know which one it is (although admittedly so do a few of the fake ones).

Close to the bottom on the right hand side of the mosaic is an amazing shot of the elaborately-patterned Crab Nebula, taken by Hubble.

Nebulae are enormous clouds of dust and gas occupying the space between stars that act as a nursery for new stars. They are formed when a star larger than our Sun starts to die and gives off a solar-wind of gas.

Located 6,500 light-years from Earth in the constellation Taurus, the Crab Nebula is the remnant of a supernova, a powerful stellar explosion. The nebula can be spotted with a small telescope and is best observed in January. 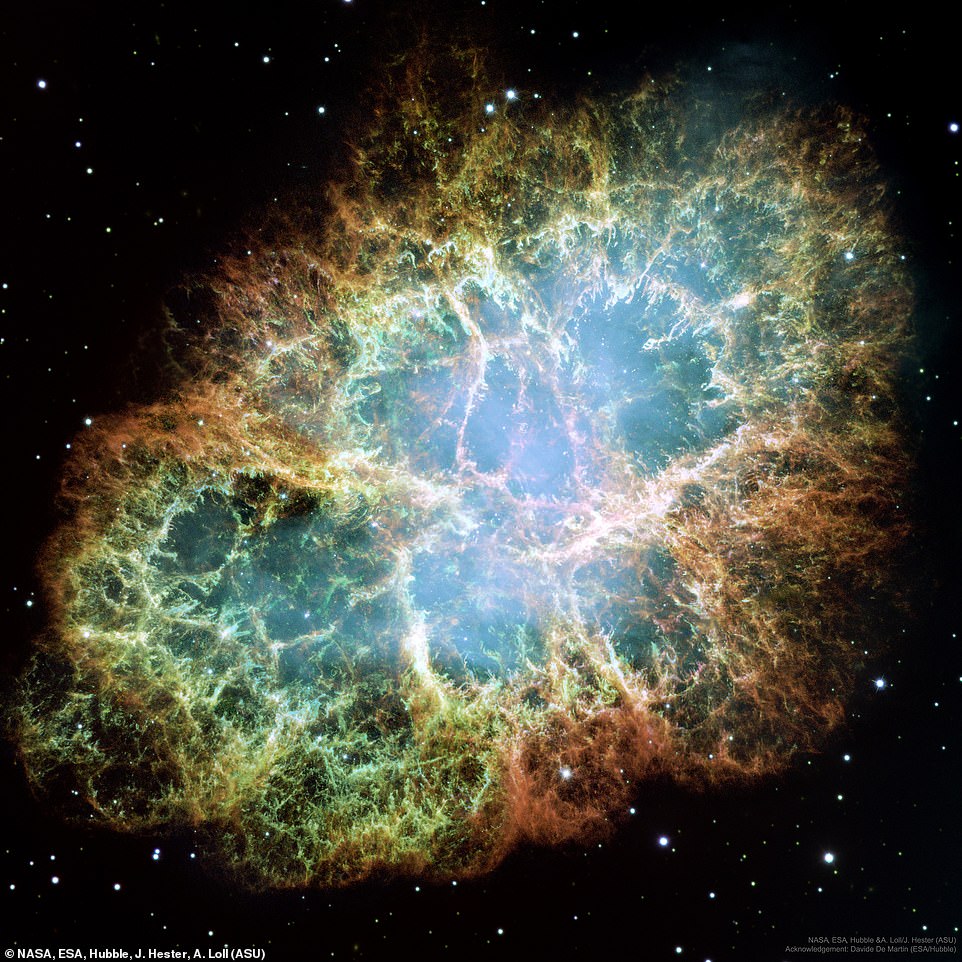 Located 6,500 light-years from Earth in the constellation Taurus, the Crab Nebula can be spotted with a small telescope and is best observed in January. The nebula was discovered by English astronomer John Bevis in 1731, and later observed by Charles Messier who mistook it for Halley’s Comet

NASA said: ‘The Crab Nebula, the result of a supernova seen in 1054 AD, is filled with mysterious filaments.

‘The filaments are not only tremendously complex, but appear to have less mass than expelled in the original supernova and a higher speed than expected from a free explosion.’

The nebula, which spans about 10 light-years, was first spotted by astronomers in China over 1,000 years ago.

In 1731, it was discovered by English astronomer John Bevis, before being later observed by French astronomer Charles Messier, who mistook it for Halley’s Comet.

In its very centre lies a pulsar, a neutron star as massive as the Sun but with only the size of a small town. This pulsar rotates about 30 times each second.

The Crab Nebula, also known as M1, NGC 1952 and Taurus A, is a supernova remnant in the constellation of Taurus.

Its name comes from astronomer William Parsons, who observed it in 1850 and produced a drawing that looked like a crab.

It was first discovered in 1731 and later study suggested its creation corresponded to a bright supernova observed by the Chinese in 1054.

Its link to the supernova explosion SN 1054 came in the early 20th century when astronomers studied observations by Chinese astronomers dating back to July 4 1054.

They reported sighting of a new star bright enough to be seen in the daytime in the same part of the sky as the crab nebula is found today.

It isn’t visible to the naked eye, but has a similar apparent magnitude of Saturn’s moon Titan, meaning it can be made out using binoculars if the conditions are right.

It is about 6,500 light years from the Earth and is 11 light years across, expanding at 930 miles per second.

There is a Pulsar at the centre of the nebular spinning at 30.2 times per second emitting a pulse of radiation from gamma rays to radiowaves.