NASA has launched a $4 million satellite about as big as a ‘family-sized box of Cheerios’ into space, where it will study the physics of ‘hot Jupiter’ exoplanets.

Known as Colorado Ultraviolet Transit Experiment (CUTE), the spacecraft is a cube satellite (CubeSat) that will spend seven months looking at these extreme worlds.

It is the first CubeSat mission funded by NASA to look at exoplanets and give the space agency a better idea of what is possible with the small satellite technology.

NASA’s latest Landsat Earth-observing satellite is also finally set to launch, going up on the same rocket, after a month of delays caused by a shortage of liquid nitrogen.

It is the continuation of a series of Earth-monitoring spacecraft dating back almost 50 years.

Both satellites launched from Vandenberg Space Force Base in Lompoc, California on a United Launch Alliance Atlas V rocket at 14:11 EDT (19:11 BST).

NASA’s latest Landsat Earth observing satellite is also finally set to launch, going up on the same rocket, after a month of delays caused by a shortage of liquid nitrogen. Artist impression 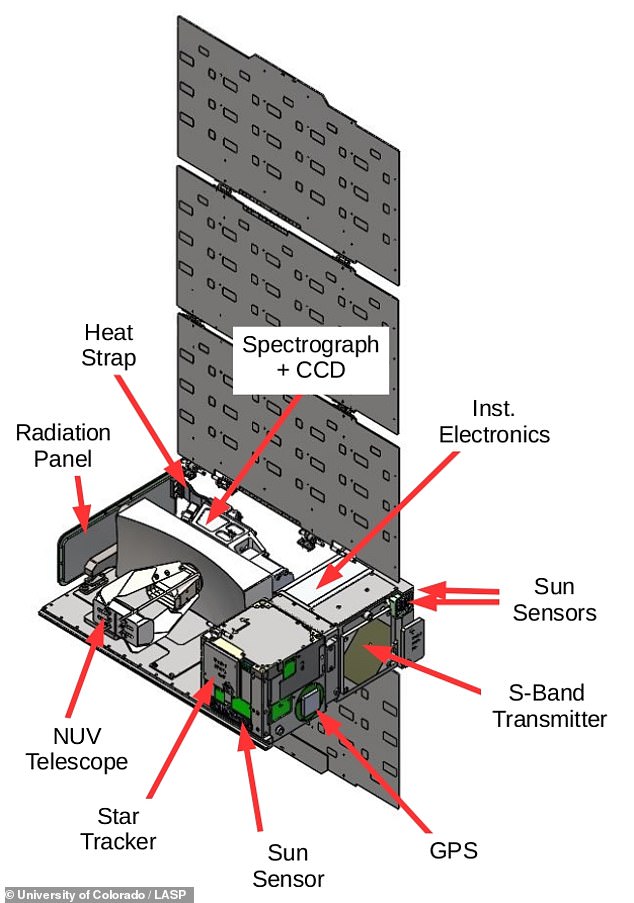 The Landsat 9 satellite is NASA’s most powerful Earth observation satellite launched to date and continues a 50-year legacy.

Operated by NASA and the US Geological Survey, it will continue to catalogue changes on the planet – both from human activity and natural processes.

‘We’ve assembled an amazing history of how the planet has changed over the last half century,’ Dr Jeff Masek, NASA’s Landsat-9 project scientist, told BBC News.

‘For example, we’re able to see the natural disturbances that occur, (such as) fires, hurricanes, and insect outbreaks.

‘And then the long-term recovery of ecosystems that takes place for decades after that.’ 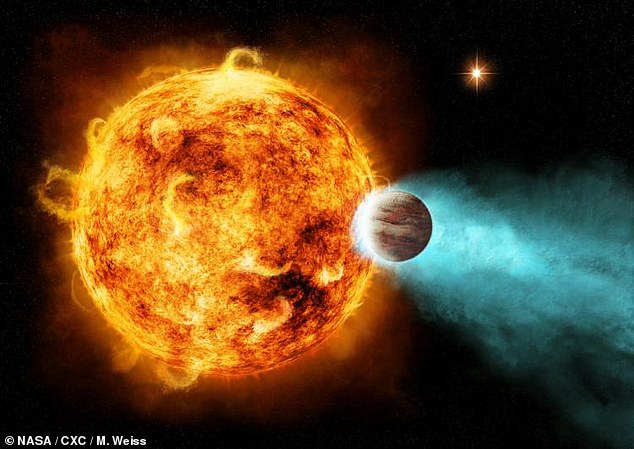 Artist’s depiction of a ‘hot Jupiter.’ According to NASA, ‘hot Jupiter’ planets are gaseous giants that orbit their stars in close proximity 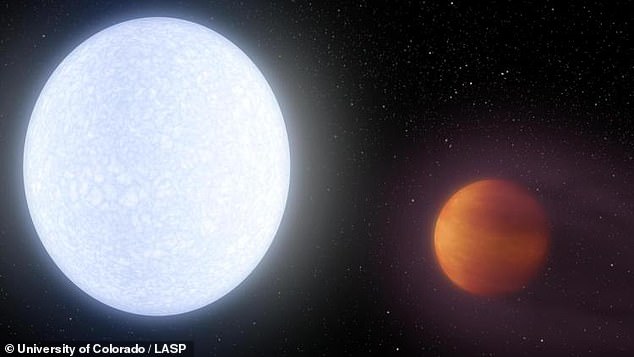 KELT-9b (RIGHT), discovered in June 2017 has a temperature of 7,800 degrees Fahrenheit and takes just a day and a half to orbit its star

WHY DOES KELT-9B HAVE EXTREME TEMPERATURES?

The exoplanet is a ‘hot Jupiter’ – a gas giant that orbits its star closer than Mercury does the sun.

It sports a glowing, comet style tail as it literally evaporates under the ultraviolet radiation from KELT-9 – the host star, which at 9,897°C is almost twice as hot as our sun (5,600°C).

KELT-9b is almost three times bigger than Jupiter, yet only half as dense, as the intense heat has caused its atmosphere to puff up like a balloon.

It’s locked to the star by enormous gravitational tidal forces – as the moon is to Earth – but the day side is perpetually blasted by extreme radiation.

As a result, molecules such as water, carbon dioxide and methane cannot form.

The latest edition will specifically look at climate and climate-change impacts on ecosystems that could help drive policy and conservation efforts.

Meanwhile, the CubeSat ‘Cheerios box’ is an experiment NASA is conducting to see how much science can be done with a small satellite, according to the team behind the project.

Principal investigator, Kevin France, from Colorado University Boulder’s Laboratory for Atmospheric and Space Physics (LASP) said it was ‘exciting but a little daunting.’

According to NASA, Hot Jupiter planets are gas giants worlds similar in size, or larger than Jupiter – but that orbit very close to their stars, sometimes closer than Mercury does to the sun in the Solar System.

KELT-9b is named after the Kilodegree Extremely Little Telescope (KELT) system first used to detect the planet in 2017.

Upon its discovery, KELT-9b – roughly 670 light-years from Earth – was deemed the hottest planet ever found, smashing the record by more than 1,100°C.

‘Because these planets are parked so close to their parent stars, they receive a tremendous amount of radiation,’ France added.

Once it’s in space, CUTE will be able to measure how fast gases are escaping from at least 10 different Hot Jupiters.

This will include KELT-9b, and is possible thanks to its unique rectangular telescope design and dedicated equipment on board.

CUTE is planned to have a 1-year life time and use near-ultraviolet (NUV) transmission spectroscopy.

It will characterise the composition and mass-loss rates of exoplanet atmospheres. 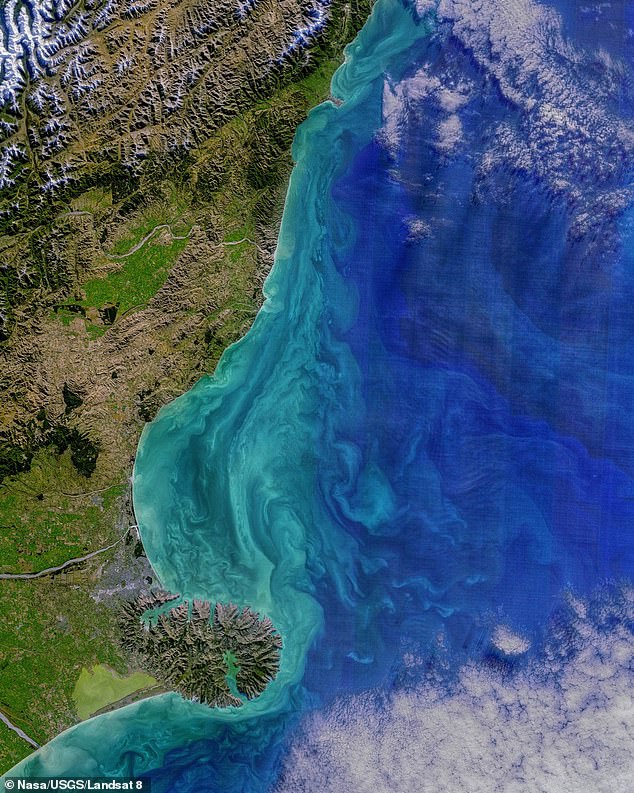 The Landsat 9 satellite is NASA’s most powerful Earth observation satellite launched to date and continues a 50-year legacy. It will capture changes to the climate, including monitoring coastal areas like this scene from New Zealand taken with the previous generation satellite 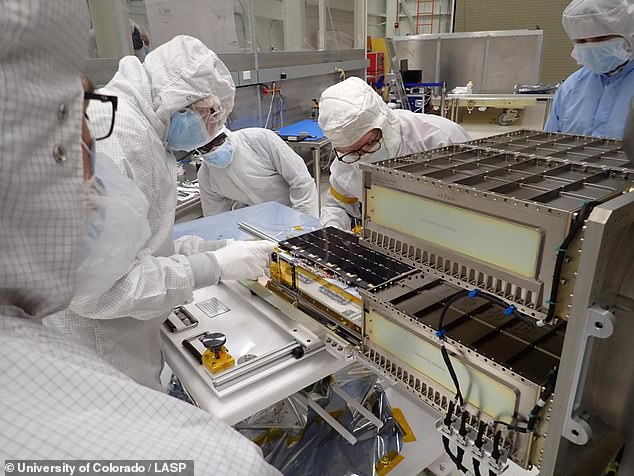 The CubeSat will head into space onboard a United Launch Alliance Atlas V rocket alongside the Landsat 9 satellite on September 27. Pictured is a team installing CUTE into its launch system

Landsat 9 is the latest satellite in the Landsat series.

It will continue the decades long mission of recording Earth’s land surface and changing climate.

To reduce the build time and a risk of a gap in observations, Landsat 9 largely replicates its predecessor Landsat 8.

Landsat 9 will extend our ability to measure changes on the global land surface at a scale.

The telescope will do this by measuring how the NUV light from the host star is changed as the exoplanet transits in front of the star and passes through the planet’s atmospheres.

Transit lightcurves created from CUTE observations will provide constraints on the composition and escape rates of these atmospheres.

This information may provide the first concrete evidence for magnetic fields on extrasolar planets.

‘Ultimately CUTE has one major purpose, and that is to study the inflated atmospheres of these really hot, pretty gassy exoplanets,’ said Arika Egan, a graduate student at LASP who has helped to develop the mission.

‘The inflation and escape these exoplanetary atmospheres undergo are on scales just not seen in our own solar system.’

In addition to looking at the physics of these planets, CUTE’s findings could give new insight into other planets, including Earth and other rocky worlds, such as Mars.

‘We can then apply these findings to different types of planets.’

CubeSats have been used for a variety of missions, including looking at the sun’s activity and looking at supernova in distant galaxies.

Earlier this year, the European Space Agency said it was going to launch a CubeSat made of wood by the end of the year to see if it could withstand the conditions of space.