Napoli paid their respects to club legend Diego Maradona by lighting up their San Paolo Stadium as the Serie A side claimed a 2-0 win over Rijeka.

Maradona died on Wednesday at the age of 60 after suffering a cardiac arrest at his home, just two weeks after undergoing surgery for a blood clot on his brain.

An own goal from Armando Anastasio and second half strike from Hirving Lozano gave the Italians victory but the real focus of the night was the tribute to Maradona as thousands of fans gathered outside the ground to pay their respects. 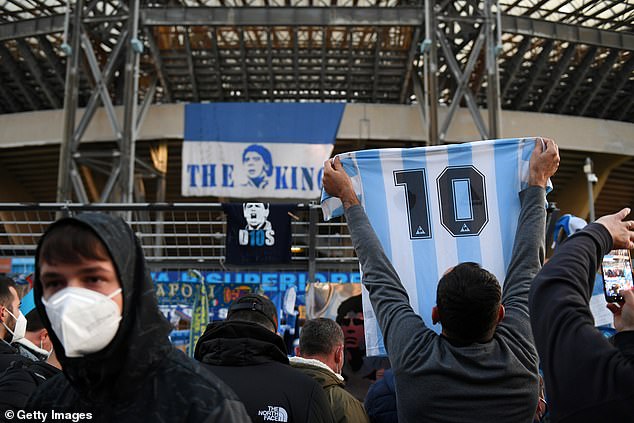 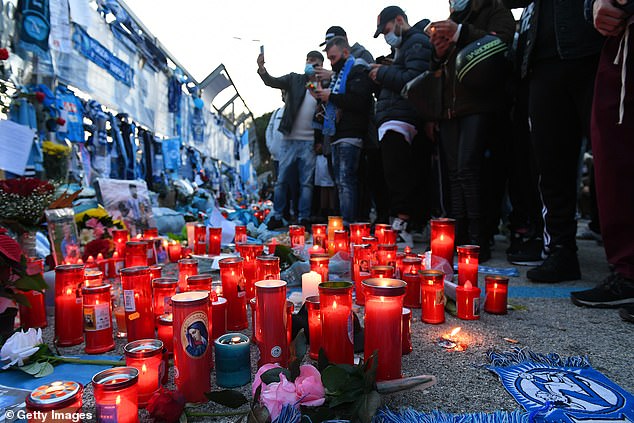 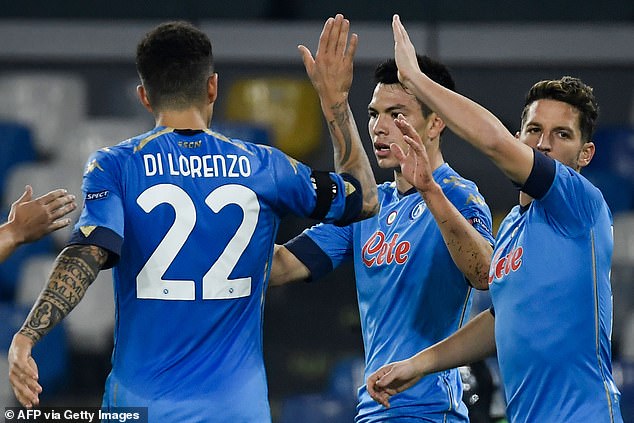 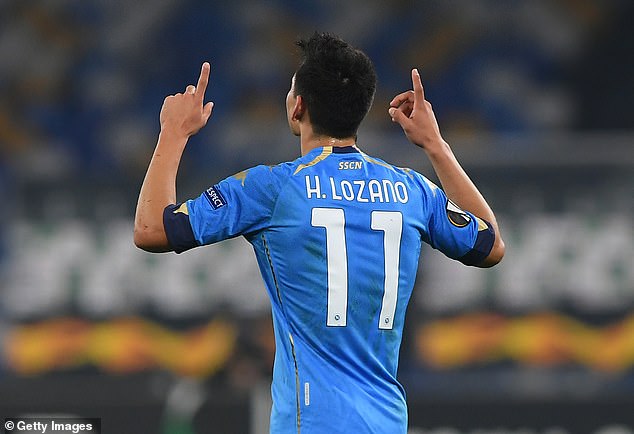 Tonight – before the Europa League match against Rijeka – for #D10S.

What a pic [by Simone Larocca].

The Argentine’s best years came playing for the Serie A side between 1984 and 1991 and led the club to unprecedented success, including two league titles and the UEFA Cup in 1989.

Supporters stood outside the stadium before, during and after the game chanting ‘Diego, Diego and other anthems to celebrate the life of their hero.  A number of scarves, messages and banners were also been hung up on the railings.

Every Napoli player wore No 10 shirts with Maradona on the back ahead of kick-off as both teams observed a minute’s silence which was followed by applause. An image of the Argentine will also remain on the scoreboard for the entire game. 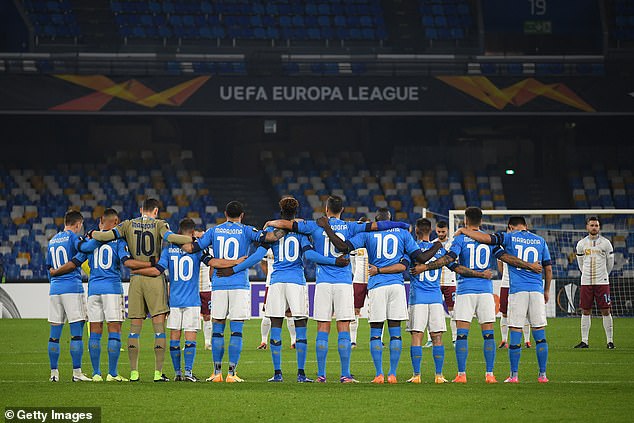 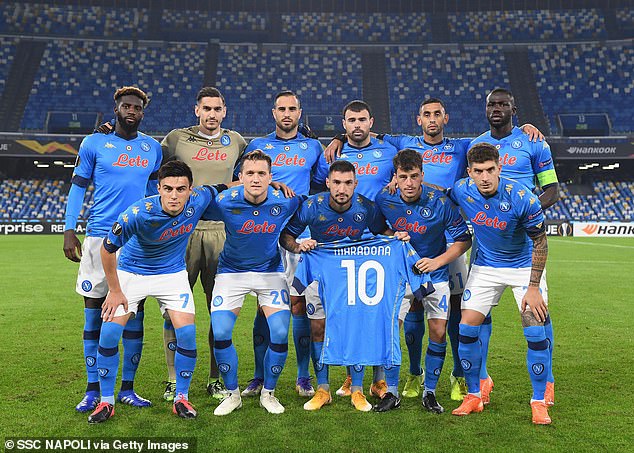 The fans outside of the San Paolo paying tribute to Maradona 🙌

This is why they call it the beautiful game 💙

Once the game was underway, Napoli dominated possession and created several chances before Rijeka’s ful back Anastasio, under pressure from Matteo Politano, turned Piotr Zielinski’s shot into his own net in the 42nd minute.

Lozano came off the bench to add a second in the 75th minute, controlling Lorenzo Insigne’s pass before slotting the ball past Ivan Nevistic.

The Italians are now top of Group F with nine points from four games, two ahead of AZ Alkmaar and Real Sociedad.

Due to on-going Covid-19 restrictions, fans were not permitted inside the ground but captain Insinge came outside to lay a bouquet of flowers next to the supporters’ tributes.

‘He always defended us, both when he played here and after he left,” said Insigne, who is from Naples.

‘He always carried us in his heart. And now we need to carry him in our hearts since he’s gone. It hurts. It’s a sad day for us Neapolitans.’ 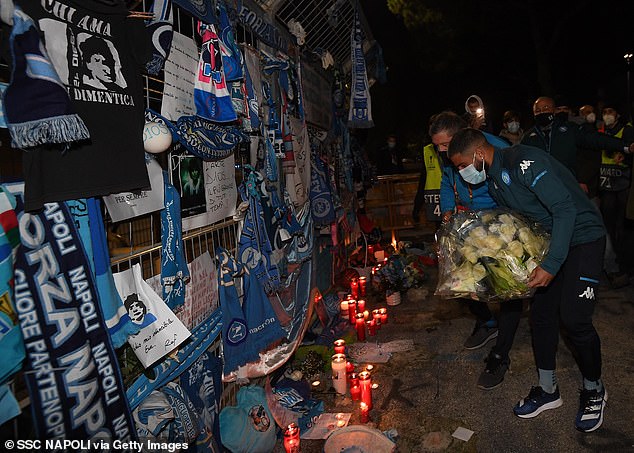 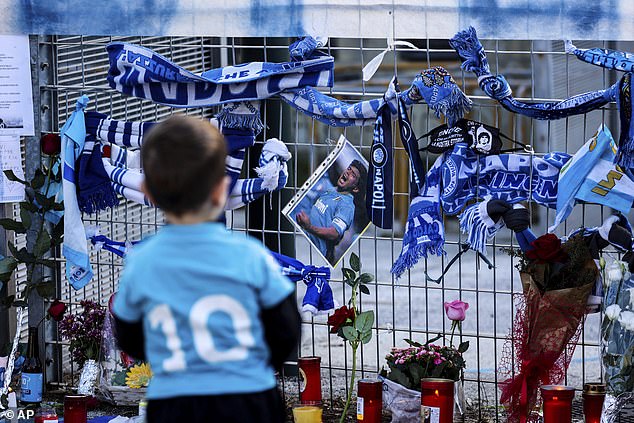 Scarves, photos and messages have also been left on the railings outside the ground

‘The entire squad and club lends its support to the family,” Insigne added. “He was the greatest player ever and we’re honored that he wore Napoli’s shirt and played in this stadium.’

The move was backed by Naples mayor Luigi de Magistris who said on Twitter: ‘We will name the Stadio San Paolo in honour of Diego Armando Maradona!” the official stated on his official Twitter account on Wednesday.’ 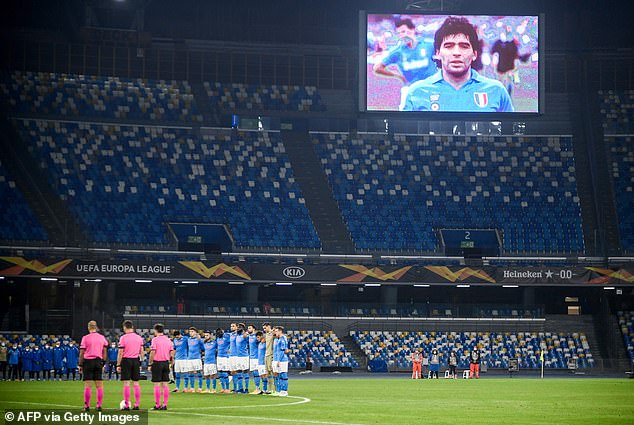 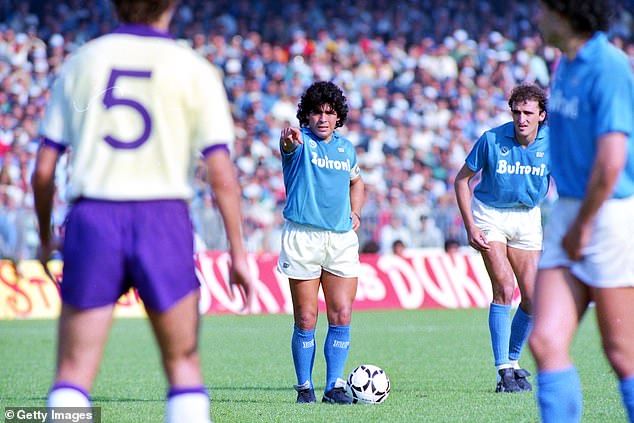