His life story might have been scripted by a latter-day Dickens — from sickly baby born out of wedlock to Barnardo’s boy, before becoming the country’s most acclaimed couturier, dressing not only Princess Diana but also the Duchess of Cornwall.

But Bruce Oldfield’s devotees are today in mourning, because his iconic Beauchamp Place showroom in London’s Knightsbridge has closed its doors, I can reveal.

‘It really is the end of an era,’ one of Oldfield’s friends tells me.

‘It’s a London landmark, as much as Harrods round the corner. But running a business in Central London is increasingly difficult.’

Bruce Oldfield’s (centre, pictured with Joan Collins, right) life story might have been scripted by a latter-day Dickens — from sickly baby born out of wedlock to Barnardo’s boy, before becoming the country’s most acclaimed couturier, dressing not only Princess Diana (left) but also the Duchess of Cornwall

His neighbours in the exclusive street are stunned. ‘It was very sudden,’ one tells me. ‘We’re very sad.’

Oldfield set up his business in 1975.

Lacking any parental help (he never met his Irish mother, nor his father, a Jamaican boxer), he was given a £500 loan by Barnardo’s, which had taken him in when he proved too much for his foster mother, Violet Masters.

It was to seamstress Violet that he owed his precocious fascination with creating clothes. 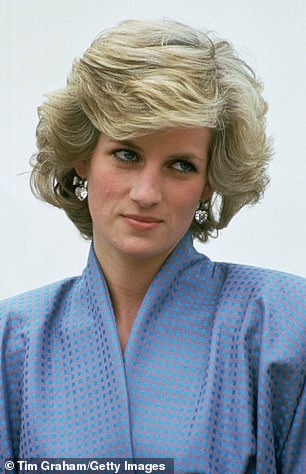 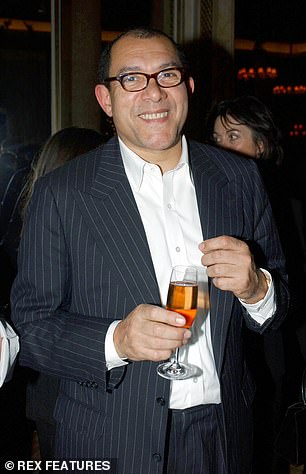 Princess Diana (left) was captivated by charm and tact the charm and tact of Oldfield (right), 70 — qualities which enabled him to attend to Camilla Parker Bowles simultaneously

Soon after leaving art school, he dressed Anjelica Huston for her appearance on the cover of Vogue, and formed an enduring friendship with another screen star, Charlotte Rampling. Soon he was dressing Diana.

‘A large part of my skills lie in being able to recognise a woman’s body and instinctively know how to enhance their figure,’ Oldfield recently reflected.

But the Princess was also captivated by his charm and tact — qualities which enabled him to attend to Camilla Parker Bowles simultaneously.

Oldfield, 70, declined to comment on the shop closure, but his friend insists this is the end of a chapter, not the whole story: ‘Bruce has some very loyal clients and will carry on serving them from his home.’

Damian’s a big hit as the wedding singer

With weddings limited to 30 — and due to be cut to 15 from Monday — it helps to invite guests who are multi-skilled.

TV star Damian Lewis showed off another talent yesterday as he serenaded a happy couple by playing the guitar and singing Irish folk songs on the steps of Chelsea Old Town Hall. 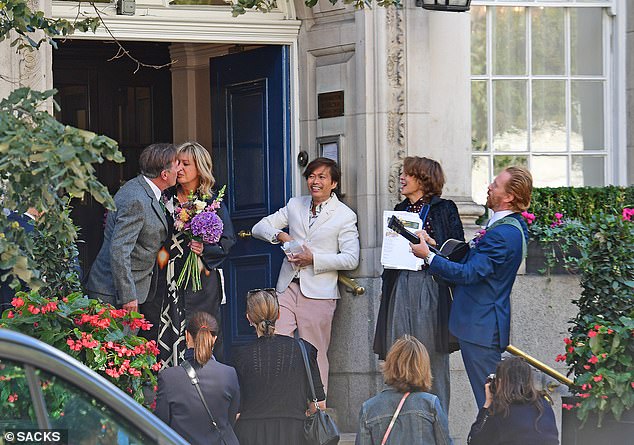 The actor, who has appeared in U.S. hits such as Homeland and Billions, was joined by his wife, Peaky Blinders star Helen McCrory, at the West London register office ceremony of their friend, journalist Marie O’Riordan. McCrory held up the lyrics as Lewis sang.

It’s not known if Lewis also had to take the wedding snaps.

The top model, 65, says: ‘I was walking down a semi‑deserted country road with my dog Max when a neighbour, with his dog, approached us without a mask.

‘I wasn’t wearing one either, not expecting that I would see anyone on my walk.

‘I immediately pulled my turtleneck over my mouth and nose to use it as a mask. I thought: “Genius fashion hack!” ’ 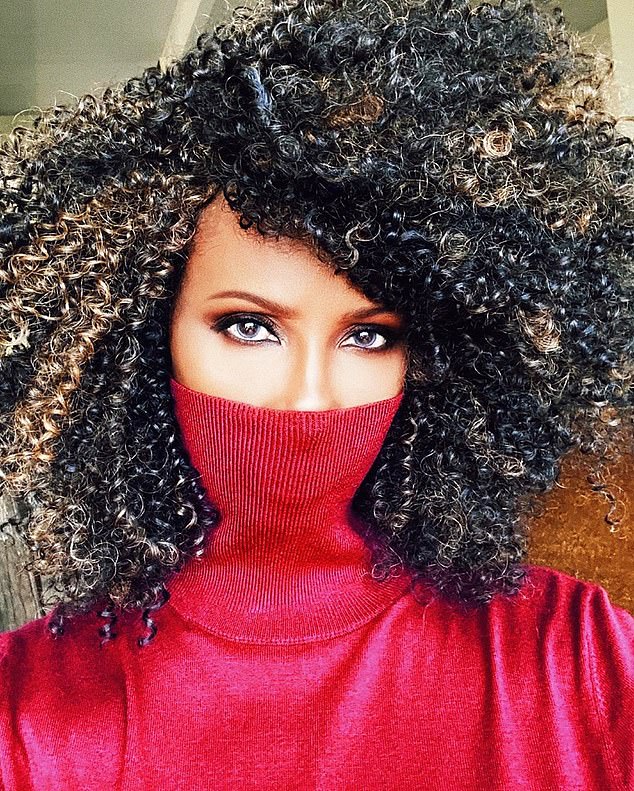 Barbara Amiel is being shunned after the eye-popping revelations in her memoirs, Friends And Enemies, which were recently serialised in this newspaper.

‘My best friends are social-distancing themselves in apparent revulsion or contempt after reading excerpts in the Daily Mail,’ the wife of former media tycoon Lord (Conrad) Black reveals in The Spectator magazine. ‘This is very sad.’

She refers to her disclosure that she gave oral pleasure to her admirer George Weidenfeld, in an attempt to avoid ‘actual body-to-body contact’ with the publishing giant 21 years her senior.

‘I have accurately described a difficult situation with a now deceased and brilliant man we all admired and loved, but who placed me in an unenviable situation.

‘Today, aspects of his behaviour would almost be called sexual harassment, were I a player of that particular game.’

Lady Black, 79, adds: ‘Losing best friends at this point in life is awful, but I will simply hope they come around when they actually read the book. If they do.’

Helena brings her new pal out of his shell 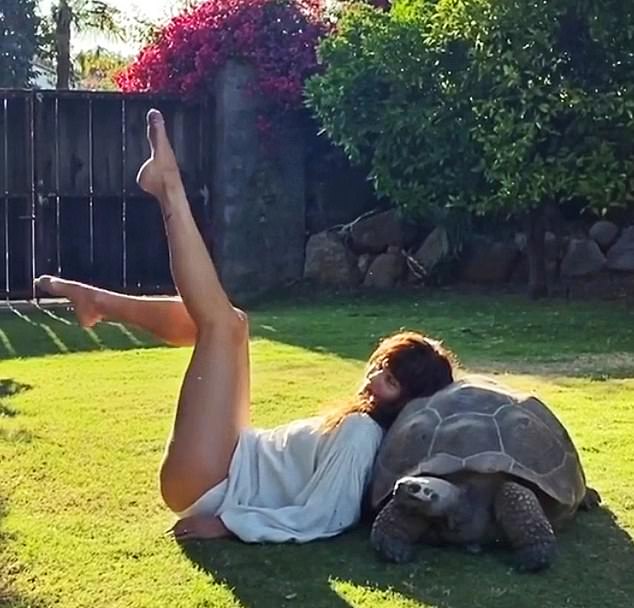 A word in your shell-like, Helena — that’s no way to keep fit!

The supermodel Helena Christensen leaned on a giant tortoise as she performed leg exercises while visiting a wildlife sanctuary in California.

‘Their shells are very thick and the animals are strong,’ insists the 51-year-old. ‘A human barely leaning on them would feel like a fly landing on their shell.

‘They live in harmony with the people who take care of them and some even stick their necks out to be caressed and massaged.’

Queen legend Brian May is determined to take to the stage again soon, despite suffering a major heart attack while gardening four months ago when the country was still in lockdown.

More from Sebastian Shakespeare for the Daily Mail…

‘There was a part of it where I couldn’t even crawl across the floor.

‘I’ve spent a lot of time thinking “this is really awful” and “how could this happen to me?”.

‘But the other half of me is thinking: “My God — isn’t it amazing that it happened in this time, when we couldn’t play anyway?”

The band hope to perform again next spring.

Boris Johnson’s coronavirus crackdown has spelled doom for the Queen’s movie plans. Her private Sandringham estate in Norfolk has called off its drive‑in cinema.

A spokesman says: ‘We have made the decision not to hold an event that will encourage groups, families and friends from different counties, towns and cities to accumulate upon one location.’

Writing a steamy love scene in his debut novel, The Diver And The Lover, appears to have got Jeremy Vine hot under the collar — if no one else.

‘I took off the belt and braces for that one,’ the Radio 2 presenter says. ‘You have to light scented candles and maybe have a dry sherry.’