The mysterious death of an 18-year-old boy whose charred body was found in a burnt-out car is being re-examined in a BBC podcast.

Caoimhin Cassidy Crossan, from Creggan, Derry, died in the early hours of 1 June 2019 when the stolen car he was travelling in crashed into a lamppost and went up in flames.

It quickly became clear that this was not simply a car theft gone wrong. Forensic tests revealed the fire had been deliberately started with a lighter inside the glove compartment, and that Caoimhin was alive when the blaze took hold.

So why didn’t he climb out of the car before it became engulfed in flames? Who was driving the car that night? And why has no one ever been charged?

These questions and more are addressed in three-part BBC Northern Ireland podcast Assume Nothing: The Boy in the Burning Car, hosted by Una Kelly, which hears from family and the lead police officer investigating the case.

Caoimhin Cassidy Crossan, pictured, from Creggan, Derry, died in the early hours of 1 June 2019 when the stolen car he was travelling in crashed into a lamppost and set on fire

The podcast starts by looking at Caoimhin’s life, which was marred by personal struggles.

When he was a toddler, his mother Kristina Cassidy suffered a period of poor mental health and Caoimhin spent time in the care of his grandmother, his beloved ‘nanny’.

At four years old, he was diagnosed with ADHD and put on medication. Despite the support of his primary school, Caoimhin struggled with behaviour and concentration and, by his early teens, he had stopped attending school with any regularity.

‘He was a doing things he shouldn’t have been doing,’ is great uncle, Charles ‘Nucker’ Tierney said on the podcast. ‘Eventually he went into drugs and was doing things that were stupid.’

His family says he lived under paramilitary threat from the age of 14, received death threats, and was effectively banished from his home city of Derry.

By the time he was 18, Caoimhin was in a young offenders’ detention centre. This proved a turning point for the troubled teenager. 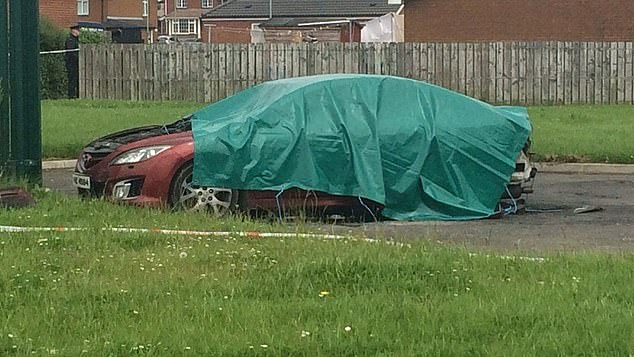 Pictured: The burnt-out vehicle where Caoimhin’s remains were discovered. The case is re-examined in three-part BBC podcast Assume Nothing: The Boy in the Burning Car

‘He cried on the phone,’ said his mother, Kristina. ‘He just couldn’t do it. He missed me and he missed his nanny. After the young offenders’, that’s when he really slowed down. He promised me and his nanny he would never be back in jail again.’

Caoimhin quit drugs after returning home, the family say, and spent his nights quietly at home.

Caoimhin discussed the possibility of turning his passions for canoeing, rock-climbing and other outdoor activities into a career. ‘He was keen, he was very, very keen,’ Stevie said.

Based on information provided by witnesses, police believe Caoimhin left a party in the early hours of 1 June with the intention of stealing a vehicle.

Earlier that night, Caoimhin had visited a number of other places, including his relatives and his then girlfriend.

‘Caoimhin would have been taking illicit substances throughout the Friday, and at the party he was at, he was using controlled drugs,’ PSNI DI Michael Winters, who is leading the investigation, explained on the podcast.

‘He was up to some other activity. He had acquired some telephones and cash, we believe Caoimhin had some money in his possession that he had picked up along the way, on the Friday.’

At around 3.30am, a red Mazda 6 was reported stolen from an area near to where the party was held. Shortly beforehand someone had reported a male acting suspiciously at the scene. 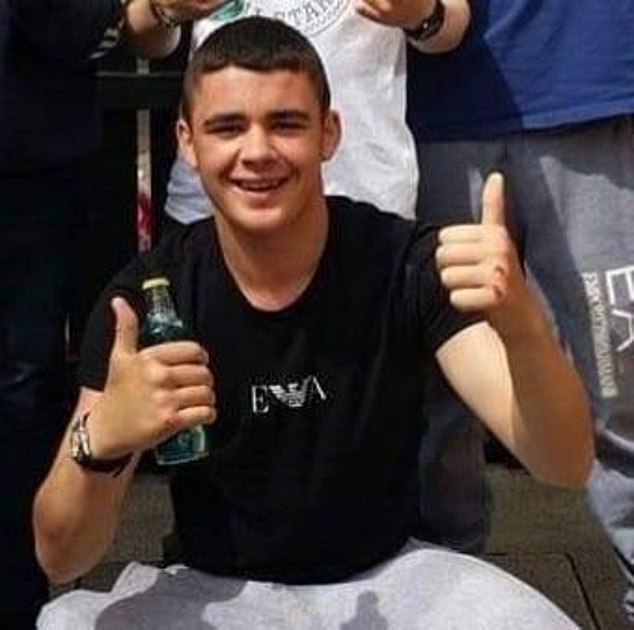 Almost immediately police believed that there was at least one other person involved, but no one has ever been charged or formally connected to the death. Caoimhin’s body was found in the passenger seat, suggesting someone else had been driving at the time of the crash

‘I feel strongly it is likely Caoimhin stole the vehicle and was the driver,’ DI Winters continued. ‘It is probable that someone else may have been driving the vehicle prior to when it was abandoned and set on fire.’

Witnesses reported seeing two men fleeing from the scene but they have never been identified. CCTV footage also suggests there was at least one other person in the car with Caoimhin.

Two mobile phones and a lighter were recovered from the wreckage but no DNA or fingerprints.

Police opened a suspicious death investigation and are investigating murder as a possible line of inquiry.

However he said he does not think it is the most likely scenario, continuing: ‘I think it is very possible that he was left behind [after the car crashed] and he was just too unaware of what was going on and he was very quickly overcome with smoke inhalation and unable to extract himself from the vehicle, but I just don’t know.

DI Winters and the team have some ideas as to who might be involved. ‘I think it’s probable they are people who Caoimhin knew,’ he said. ‘I think it’s very possible we have their names.’

However a lack of credible evidence means they have not been able to charge or formally question anyone.

For the family’s part, Kristina said she is ‘110 per cent’ sure of the name of the person who was in the car at the time when Caoimhin died.

She said she does not necessarily want the person who was in the car that night to go to prison, but simply the opportunity to face them.

She continued: ‘I want to be able to face this person and let them see what this has done to me and ask them, “why?”

‘Caoimhin got into some anti-social behaviour, but Caoimhin had a lot of people who loved him. People still ask me to this day, “How are you?” and the answer is “I don’t know”… It is something that can’t be accepted.’