The Defence Secretary described Ms Suu Kyi’s jailing – which comes after her party was deposed in a coup back in February – as ‘an appalling attempt… to stifle opposition and suppress freedom and democracy’.

Ms Suu Kyi, 76, was sentenced to two years for incitement against the military and another two years for violating Covid rules following a closed-door trial during which neither she nor her lawyers were allowed to speak to the media.

The charges are just two of dozens that the Nobel laureate is facing, and which could see her jailed for the rest of her life if found guilty on all counts.

Aung San Suu Kyi, Myanmar’s deposed pro-democracy leader, has been sentenced to four years in jail by the military junta which deposed her in a coup (file image) 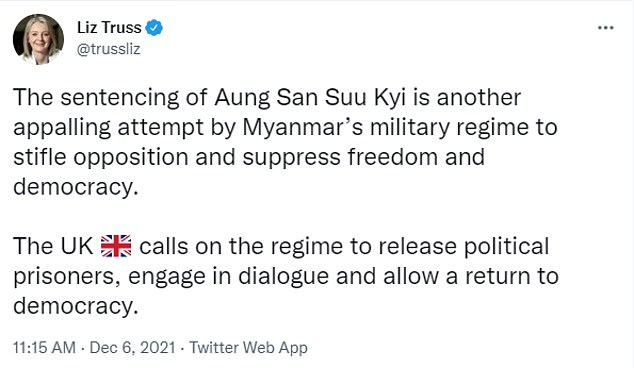 Ms Truss said: ‘The sentencing of Aung San Suu Kyi is another appalling attempt by Myanmar’s military regime to stifle opposition and suppress freedom and democracy.

‘The UK calls on the regime to release political prisoners, engage in dialogue and allow a return to democracy.’

Win Myint, the country’s former president who had ruled in Suu Kyi’s place because of laws designed to block her from power, was also jailed for four years on Monday on the same charges.

‘They will face other charges,’ a military spokesman said, without revealing when or if the pair will be moved from house arrest in the capital Naypyidaw to jail.

The incitement conviction related to statements her National League for Democracy party published shortly after the coup condemning the generals’ takeover. 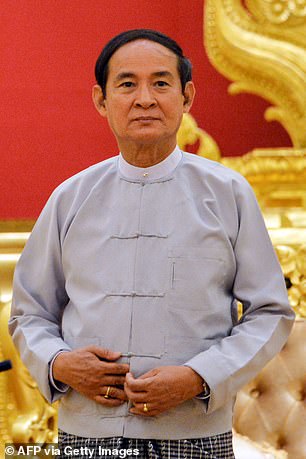 The Covid charge is linked to last year’s election, which the NLD won in a landslide, but the details are not clear with the government imposing a gag order on the court proceedings.

The trial has been closed to the media and the junta’s public information outlets have not mentioned the proceedings.

Suu Kyi’s lawyers have been barred from communicating with the media and public.

Suu Kyi’s supporters say the cases are baseless and designed to end her political career and tie her up in legal proceedings while the military consolidates power.

Her jailing had been widely expected.

‘I don’t expect anything out of this broken justice system,’ said Maw Htun Aung, a deputy minister in an opposition parallel government, told Reuters.

The junta says Suu Kyi is being given due process by an independent court led by a judge appointed by her own administration.

In recent weeks, other senior members of the NLD have received long sentences.

A former chief minister was sentenced to 75 years in jail this month, while a close Suu Kyi aide was jailed for 20.

‘The harsh sentences handed down to Aung San Suu Kyi on these bogus charges are the latest example of the military’s determination to eliminate all opposition and suffocate freedoms in Myanmar,’ said Amnesty deputy regional director for Campaigns Ming Yu Hah. 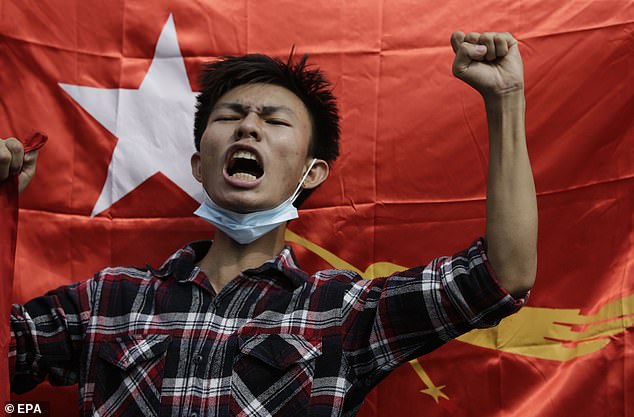 Myanmar’s military seized control of the country in February as the government prepared to transfer power away from the generals, sparking angry and often bloody protests (file)

‘The court’s farcical and corrupt decision is part of a devastating pattern of arbitrary punishment that has seen more than 1,300 people killed and thousands arrested since the military coup in February.’

International Crisis Group’s Myanmar senior advisor Richard Horsey also told AFP the sentences ‘were about retribution and a show of power by the military’.

‘It would be surprising, though, if she were sent to prison. More likely, she’ll serve out this and subsequent terms at her house or a regime ‘guest house’.’

The military, which has dominated life in Myanmar for decades, has defended its coup, claiming fraud allegations in last year’s general election.

International pressure on the junta to restore democracy swiftly has shown no sign of knocking the generals off course, and bloody clashes with anti-coup protesters continue across the country.

On Sunday soldiers wounded at least three people after ramming a car into a peaceful demonstrators in commercial hub Yangon, eyewitnesses said.

State media said one had sustained serious wounds and 11 had been arrested for protesting ‘without asking for permission’.

Suu Kyi, the daughter of the hero of Myanmar’s independence from British colonial rule, spent years under house arrest for her opposition to military rule but was freed in 2010 and led her NLD to landslide victory in a 2015 election. 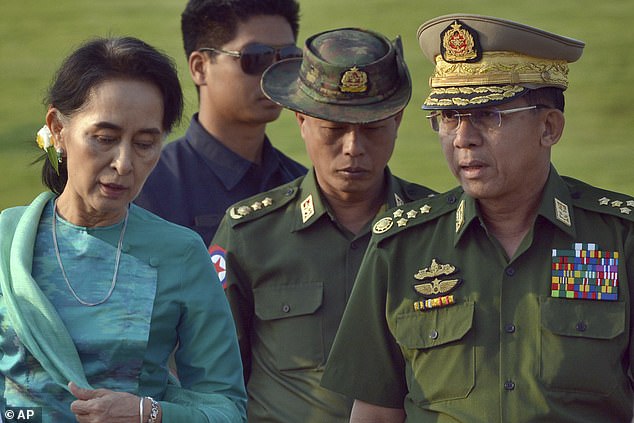 Her party won again in November last year but the military said the vote was rigged and seized power weeks later. The election commission at the time dismissed the military’s complaints of vote fraud.

The international community has condemned the violence in Myanmar since the coup, and Western states have demanded Suu Kyi’s release.

Matthew Smith, chief executive of the Fortify Rights group, said the sentencing was ‘part of a widespread and systematic attack on the civilian population’ and called for the immediate release of Suu Kyi and other political prisoners.

The group ASEAN Parliamentarians for Human Rights said no-one was fooled by the outcome of the trial.

‘Since the day of the coup, it’s been clear that the charges against Aung San Suu Kyi and the dozens of other detained MPs, have been nothing more than an excuse by the junta to justify their illegal power grab,’ it said in a statement.