Thousands of Australians desperate for companionship during the pandemic came out in droves to adopt or buy dogs for some short-term comfort without realising the commitment required.

When pubs and restaurants reopened, work-from-home was no more, and social calendars began to fill up again, many Aussies – including myself – realised they weren’t as prepared for their new pets as they had thought.

My justification for getting a puppy was a new passion for running I discovered during Sydney’s first lockdown. I told my parents I wanted a dog that doubled as an exercise partner – and my 12-year-old border collie wasn’t going to cut it.

As soon as I started thinking about buying a dog, I saw Australian kelpies everywhere I went. I saw them perched on the front of a paddle-boards, running alongside their owners or catching frisbees in mid-air at the park.

I decided I wanted my own puppy to share with my teenage siblings, and after tense negotiations with my parents, bought a kelpie puppy we named Daphne.

But it didn’t take long before I experienced some serious buyer’s remorse. 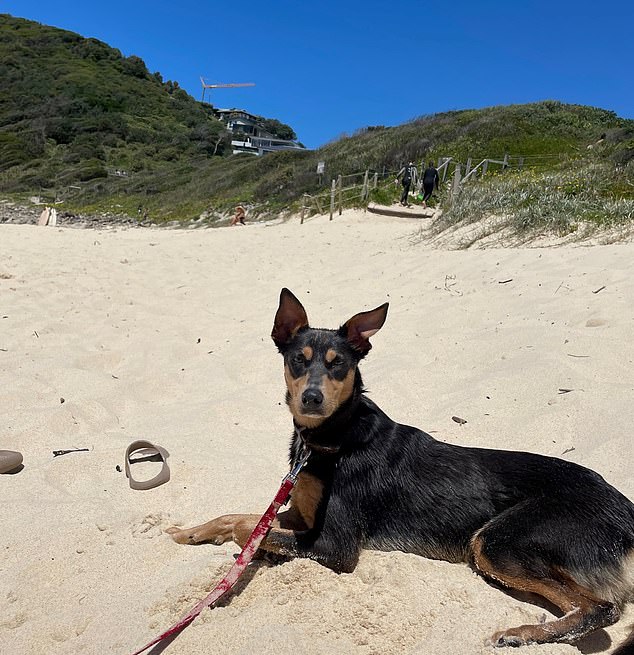 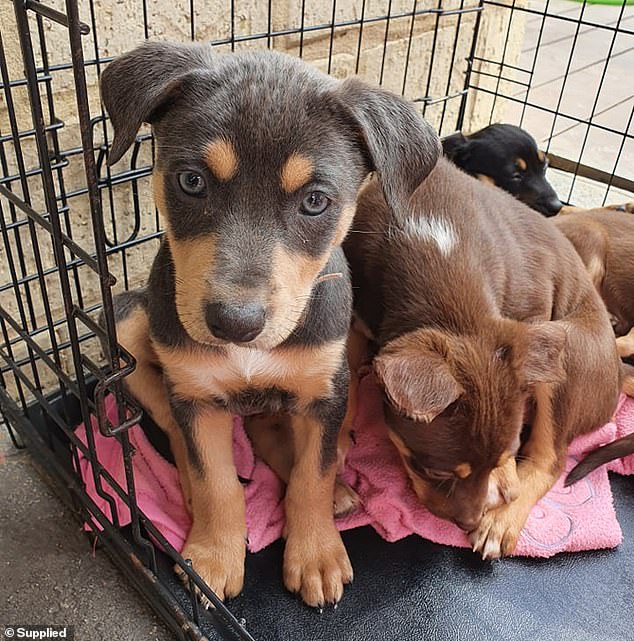 As soon as I started thinking about buying a dog – Australian kelpies seemed to be the only dogs I saw and I soon became fixated on the breed (pictured, Daphne with one of her siblings)

We had done some googling – in retrospect not nearly enough – and found a litter of kelpie puppies in Kurrajong Heights, on Sydney’s northwestern semi-rural outskirts, in July 2021.

Just days later, I sent the breeders a direct deposit of $1,700 and anxiously awaited our new puppy’s arrival.

Restrictions at the time meant we couldn’t drive to regional NSW to pick her up so a ‘pet courier’ brought her to our home on the Northern Beaches.

Soon after I carried her through the front door, Daphne – as adorable as she was –  turned our lives completely upside-down.

She tore toilet paper, shoes and furniture to shreds and would routinely escape onto a busy road beside our house where she was almost flattened multiple times.

She almost choked to death after jumping out of the boot while still attached to the car and once had to be rescued from a vet almost an hour away when she escaped without her collar on.

She ate food off our plates when we weren’t looking and tormented our cat to the point where she went missing for weeks and refused to come inside.

On the Bondi to Bronte walk in Sydney’s eastern suburbs, I called my parents in hysterics after Daphne decided to join a local rugby game.

I tried in vain to catch her as furious officials shot me dirty looks before I just gave up and sobbed into the shoulder of a kindly mum.

Her young daughter was eventually able to catch her and I jokingly asked if the family wanted to keep her – before asking myself if I was actually joking. 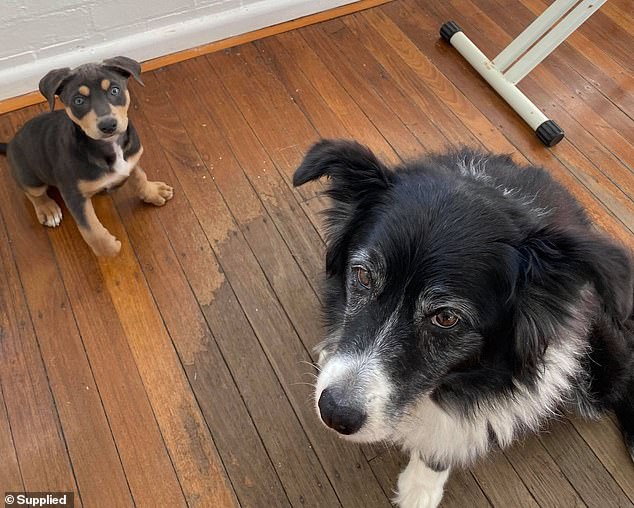 Our older dog, a border collie, was less than impressed with the new (and noisy) arrival

When I went for walks with friends, I would cringe as they watched wide-eyed as Daphne chased pigeons, lunged at passing motorbikes, or devoured food scraps out of a bin in an almost frenzied state that I passed off as a ‘puppy stage’.

My parents and I didn’t know what to do. We hadn’t been able to attend puppy school during lockdown so Daphne’s training was rudimentary at best.

I was in the office on an ordinary Thursday in October when I received a text message from my mum who was looking after her at home.

‘Not joking – can’t handle it anymore Liv sorry but it’s too much and I see zero progress in any training or gates and I’ve got too much to deal with without a mad puppy that craps everywhere,’ she wrote.

Alongside the text was a link to an animal welfare charity called ‘Dogs 4 Jobs’ which re-homes working breed dogs like kelpies, border collies and cattle dogs. 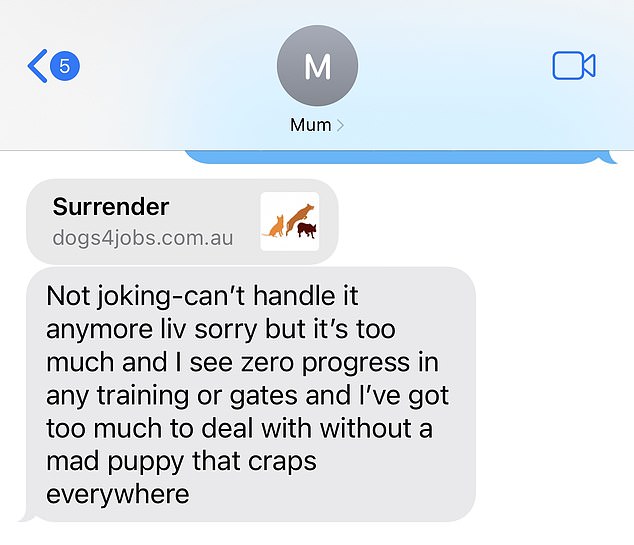 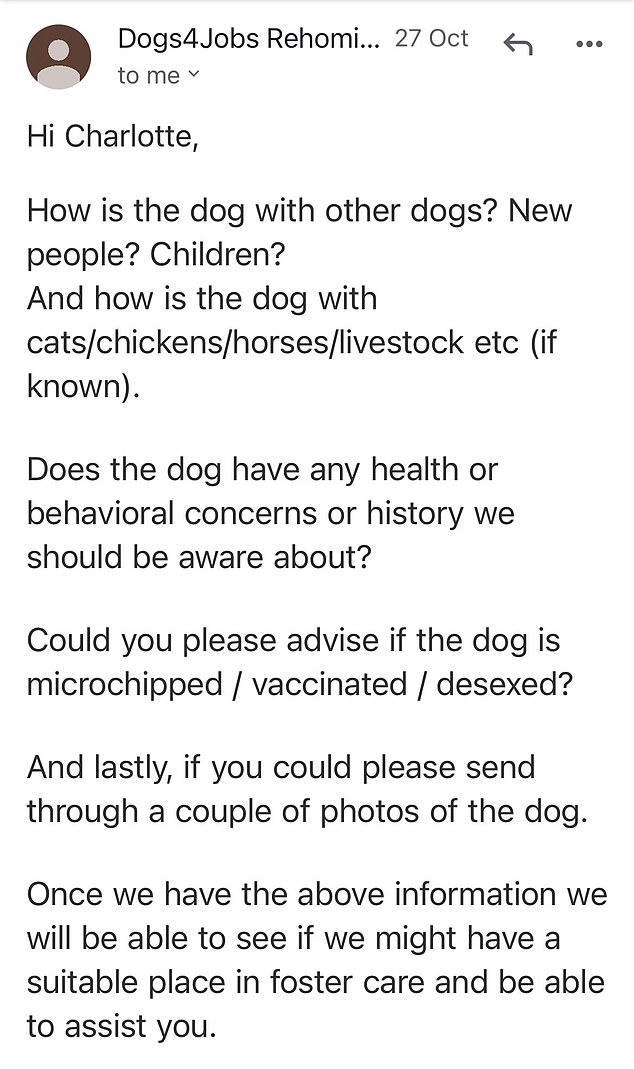 My mum received a reply a few days later from a woman at the rescue who asked how Daphne behaved with other dogs, cats, children and livestock (pictured) 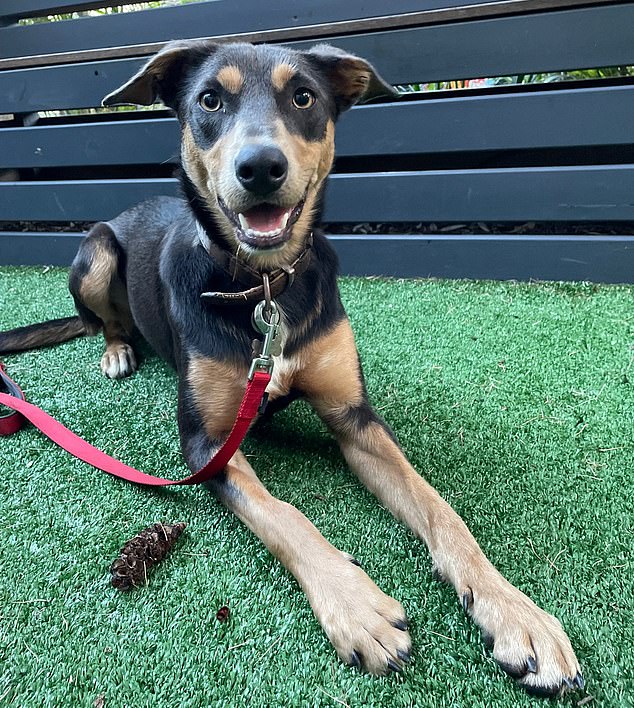 Daphne tore toilet paper, shoes and furniture to shreds and would routinely escape onto the busy road where she narrowly avoided being hit by a car several times

In desperation, my mum had contacted the organisation, which promises ‘no judgement’ of people who feel like keeping their dogs is no longer an option.

She received a reply a few days later from a woman at the rescue who asked how Daphne behaved with other dogs, cats, children and livestock.

She asked if Daphne had any health or behavioural concerns or history they should know about, and if she was vaccinated, desexed or microchipped.

‘Once we have the above information we will be able to see if we might have a suitable place in foster care,’ she wrote.

After many tense discussions with my parents, I started to wonder if Daphne was a bigger burden on our lives that I had realised.

As much as I loved her, I knew the dog was the root cause of 99 per cent of my arguments with my parents and giving her away would make it all stop.

On the other hand, I knew that my mum giving away a dog that I considered mine would remain a source of bitter resentment perhaps for the rest of our lives. 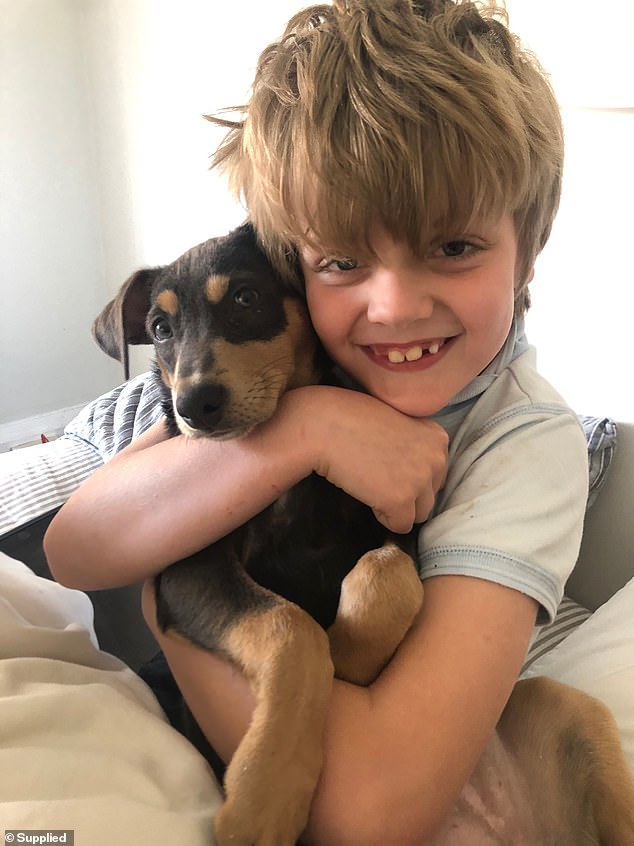 My little brother, pictured with Daphne, is the reason my parents didn’t put her up for adoption

In the end, it was my little brother who saved Daphne from being given away.

He was in floods of tears at the thought of losing her and begged my parents to keep her – even offering to help with her training.

After my mum cooled off, we came up with some practical solutions to our problems with Daphne – including employing the help of a behaviouralist.

She taught us ways to keep her entertained during long work-from-home days, stop her from destroying our things and lunging at birds and motorbikes.

I have found the key to tiring her out is using tennis, rugby and soccer balls in addition to frisbees, sticks and basically anything that can be thrown.

My family has grown more fond of Daphne now we know she will be a permanent fixture in our lives – for at least the next 10 years!

Our cat begrudgingly lets the dog lick her ears, and our border collie has accepted her as a companion – they sometimes (very rarely) will sleep beside each other.

Daphne even had a present under the tree last month – and she managed not to destroy it before Christmas Day. 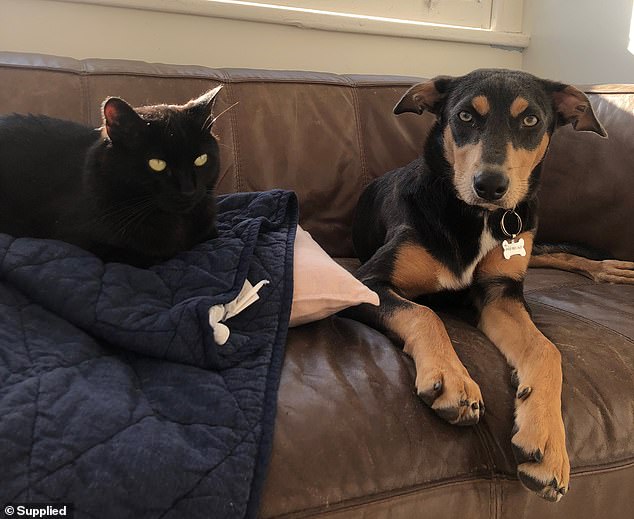 Our cat begrudgingly lets Daphne lick her ears, and our older dog has resigned herself to her presence – they sometimes (very rarely) will sleep beside each other

I visited the RSPCA shelter in Yagoona, in Sydney’s west, to find out if I wasn’t the only new dog owner who had experienced buyers remorse after the pandemic.

Kristy Blake, the RSPCA’s General Manager of Animal Operations, Fundraising, and Communications said there had been a spike in adoptions, and then surrenders.

‘We certainly did see a lot of demand for adoptions at the beginning of the pandemic and lockdowns, which was really great,’ she told me.

‘We noticed when lockdown stopped and people started to transition back to work,   we saw an increase in surrenders in a short period of time.’

Ms Blake, who has two RSPCA dogs of her own, said the issue the organisation is facing now is a mysterious slump in adoptions. 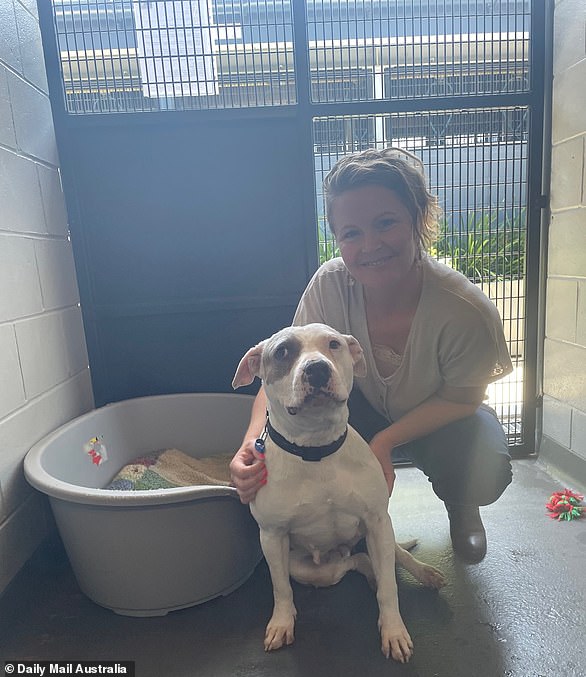 The RSPCA’s Kristy Blake, who has two RSPCA dogs of her own, said the issue the organisation is facing now was a mysterious slump in adoptions (Ms Blake is pictured here with Crush)

‘We’ve seen a bit of a decrease in adoptions. And it’s really difficult to work out, or pinpoint why. We’re not 100 per cent sure,’ she said.

‘We’re not sure if the spike in people getting animals during Covid means that maybe there isn’t as many people in the market for animals as there normally is.’

Ms Blake said there had been a slight increase in the amount of aggravated cruelty complaints which was ‘sucking’ the RSPCA’s resources.

She said the pandemic had been a really difficult time for people and that the transition back to normalcy hadn’t been for pets or their owners.

‘A lot of people, through no fault of their own, sometimes don’t necessarily consider the impact on their pets, when there’s a big life change,’ she said.

‘And if we don’t put the time and care into helping them with that transition, the same as you would a child or a family member or a partner, you can often see the challenges that people are experiencing with their dogs’.

Ms Blake said the biggest factor driving surrenders was financial, with more people having to part ways with their beloved dog just so they could pay the bills.

‘People have to make some really hard decisions. They’re walking that tightrope of balancing their family and life budget,’ she said. 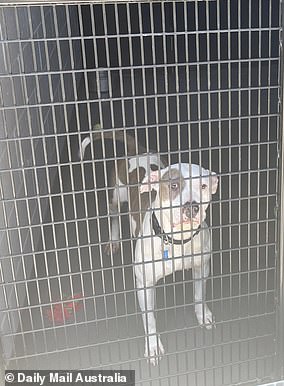 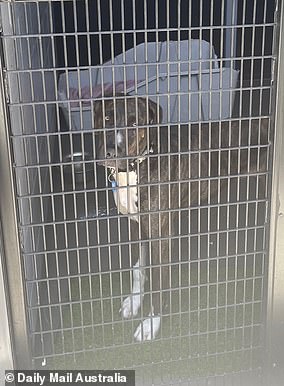 I visited the RSPCA Sydney shelter in Yagoona, in the city’s west, to ask if there had been a spike in adoptions and then subsequent surrenders during the pandemic

A lot of animals, particularly dogs, struggle to cope in shelters.

‘People often think that the reason that animals are at the RSPCA is because there’s something wrong with them, either behaviourally or medically, they’re defective.

‘You would notice when you walked down the rows of RSPCA that there are a lot of bigger breeds, ‘bully breeds’ like shepherds, Rottweilers, Kelpies, cattle dogs, Huskies and they’re all amazing, amazing dogs.

‘But they just require people that have time and are willing to put that into them.’

The RSPCA believes the best place for dogs is always with their owners, with the organisation’s focus now on providing owners with tailored advice and support.

‘I think the best piece of advice is reach out and seek support because there is a wealth of knowledge out there in the animal welfare industry,’ she said.

‘Because at the end of the day, they never understand what they did wrong.’

Interested in adopting a dog or cat? Find your furry friend here.