By Liz Hoggard for the Daily Mail

She lives in Beckenham, London, with her husband, who runs an art installation company, and sons Gus, three, and Jerry, one.

I’d been working in e-commerce for ten years for firms including Liberty and L’Oreal. Then I was made associate digital director for Anya Hindmarch.

But in 2016, my husband and I suffered a devastating tragedy when our first son Beau was stillborn. I was 38 weeks pregnant. It was a huge shock and I never thought it would happen to me.

Liz Rawlinson, 38, (above) from Beckenham, London, founded Gus + Beau in 2019 and said her children – Gus and Jerry, and her tragically stillborn child Beau – are her biggest inspirations

I was incredibly lucky to get pregnant again, and had my second son, Gus, a year later — my rainbow baby, as they are known.

While on maternity leave, I looked for a beautiful puzzle playmat in neutral colours which would fit in with our living room. I could only find garish multi-coloured ones, so I designed my own in Eva foam, which is waterproof and durable.

Working in retail, and spending time looking at homes online, I could see other parents wanted simple patterns in muted tones, too.

I’d often thought of starting a business and, after experiencing such loss, I knew I wanted a better work/life balance. I needed to be able to take Gus to and from school when the time came.

I went back to work at Anya Hindmarch and, in my spare time, I came up with two designs, Triangle and Circle, in grey and white, that blend in to your living area, nursery or kitchen.

Gus + Beau launched in March 2019 and did well really quickly. Then, to my delight, I had my third son, Jerry, in December 2019. It was quite a crazy year. 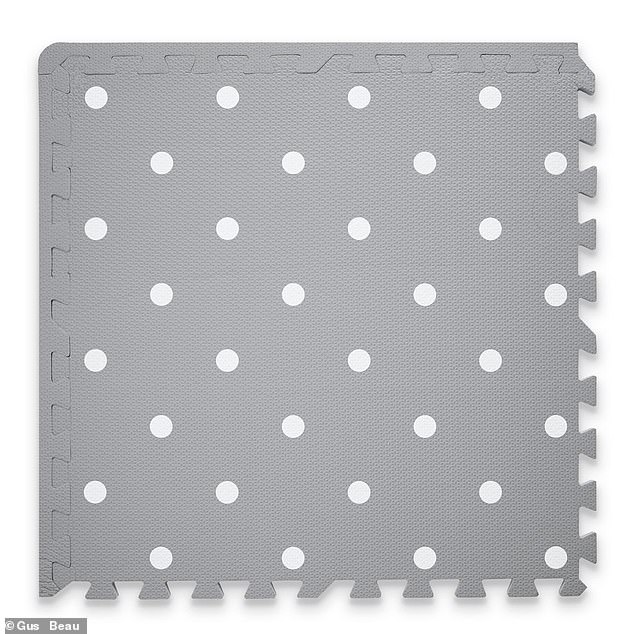 Liz admitted she wouldn’t have had created Gus + Beau, which provides minimalist playmats (above) for babies and toddlers, without her child Bea, who was tragically stillborn in 2016

During the pandemic, many parents were at home with their children and focusing even more on creating safe spaces for them, so we had a boom. Last September, I was able to resign from my job and run my business full-time.

Today, we have seven mat designs and multiple packs can be joined together. We sell via the website and through JoJo Maman Bebe, Scandiborn and kidly.co.uk.

In July, we are launching a collaboration with Dick Bruna’s children character Miffy, which is a real thrill.

My greatest inspirations are my sons: our rainbow baby boys, Gus and Jerry, and our first, Beau, who lives for ever in our hearts.

If it wasn’t for Beau, I would never have had the motivation to start my own business. The worst had already happened, so I became totally fearless. And the best thing is, I get to say his name every day.