‘The place will be crawling with them,’ our expedition leader Felicity Aston MBE said in reference to polar bears before we left on a nine-day ski and camping trip in the icy wilds of Svalbard above the Arctic Circle.

Polar bears outnumber humans there (3,000 vs 2,552) and the prospect of sleeping in brutally cold temperatures surrounded by them filled me with a slight feeling of dread, and, after a quick Google, I discovered the last fatal mauling on a campsite in that region was quite recent – August 2020.

However, I was reassured that all would be well, because the six-strong team – all women – would be joined by a trained rifleman with a big gun and plenty of ammunition in case any bears went on the attack. So, I packed up my things and headed north.

MailOnline Travel’s Sadie Whitelocks travelled to the Norwegian archipelago of Svalbard. She joined five other women on a nine-day ski and camping expedition crossing a section of the main island. Pictured above, expedition leader Felicity Aston MBE with team member Emma Ranger behind 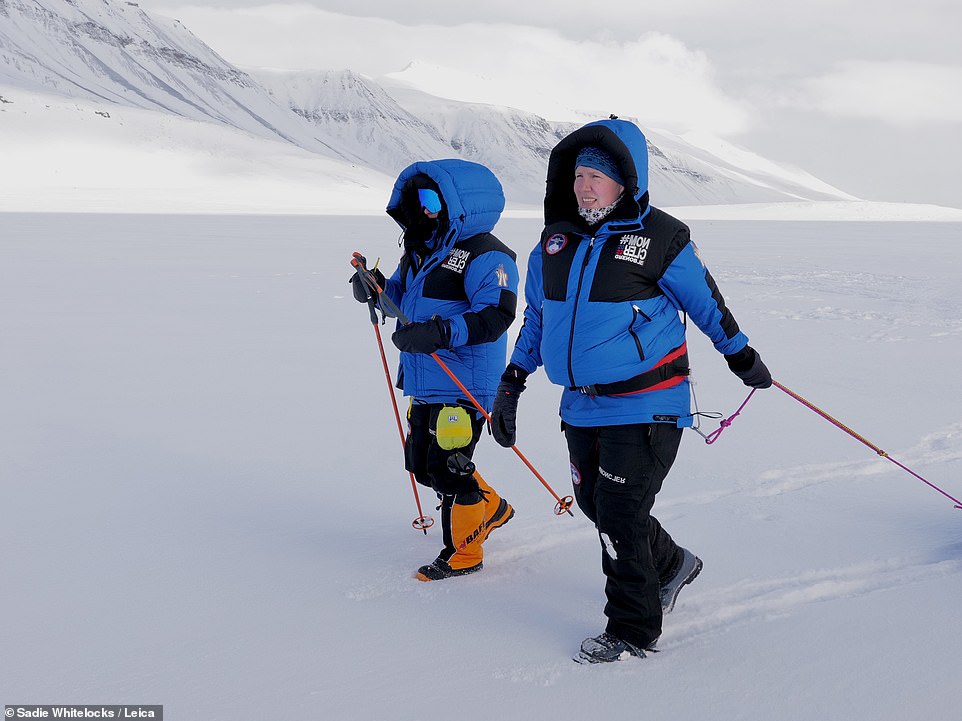 Felicity, pictured right, has more than 20 years’ worth of experience guiding expeditions in the polar regions 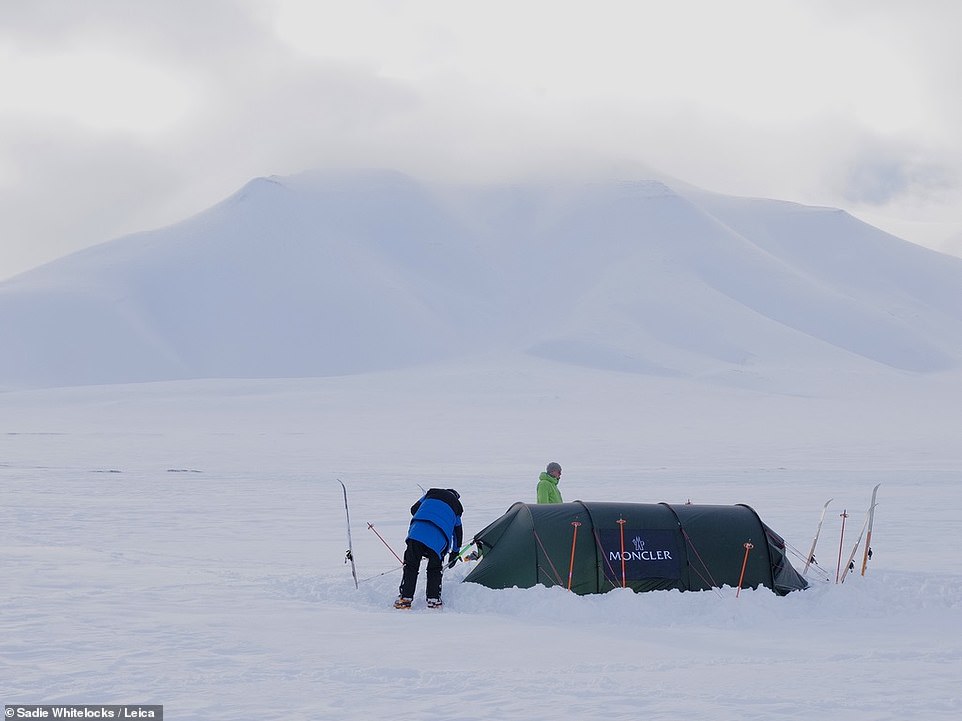 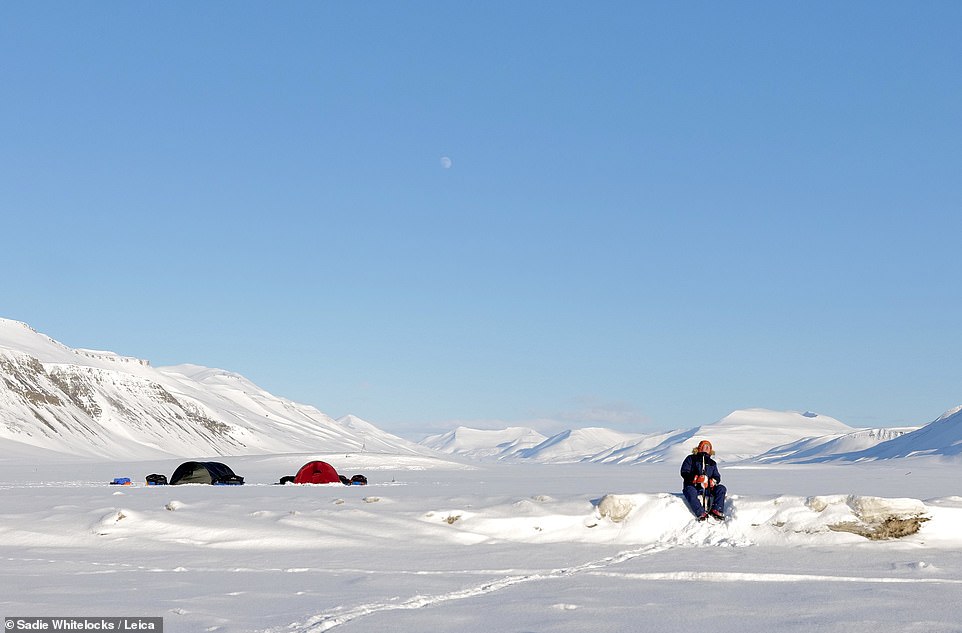 The team were joined by a trained rifleman, pictured, with ‘a big gun and plenty of ammunition’ in case any bears went on the attack 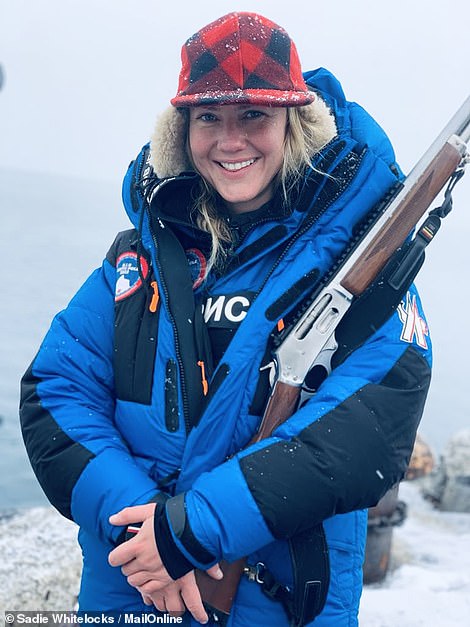 The aim of our trip would be to conduct crucial scientific research around climate change and the deterioration of Arctic sea ice ahead of a North Pole expedition in 2023.

Over the course of nine days, we would be crossing the snowy terrain while pulling sledges loaded with around 80kg worth of equipment including tents, stoves, scientific materials and food supplies.

Our journey to the Norwegian archipelago of Svalbard began with a flight from Heathrow to Oslo, which was a little manic, as we had around 18 large bags in total and the sledges were awkward objects to wheel through the terminal without nipping people.

From Oslo we went on to Longyearbyen, which is the capital of Svalbard and the northernmost city in the world, set around 814 miles (1,310km) south of the North Pole.

After two days of preparation in Longyearbyen, stocking up on snacks, foot warmers and gas for the camping stoves, we hopped on a small fishing boat to Barentsburg.

This small industrial town, which sits on the west coast of Svalbard’s main island and some 34 miles (55km) from Longyearbyen via boat, Skidoo, or helicopter, is where we would start our expedition. 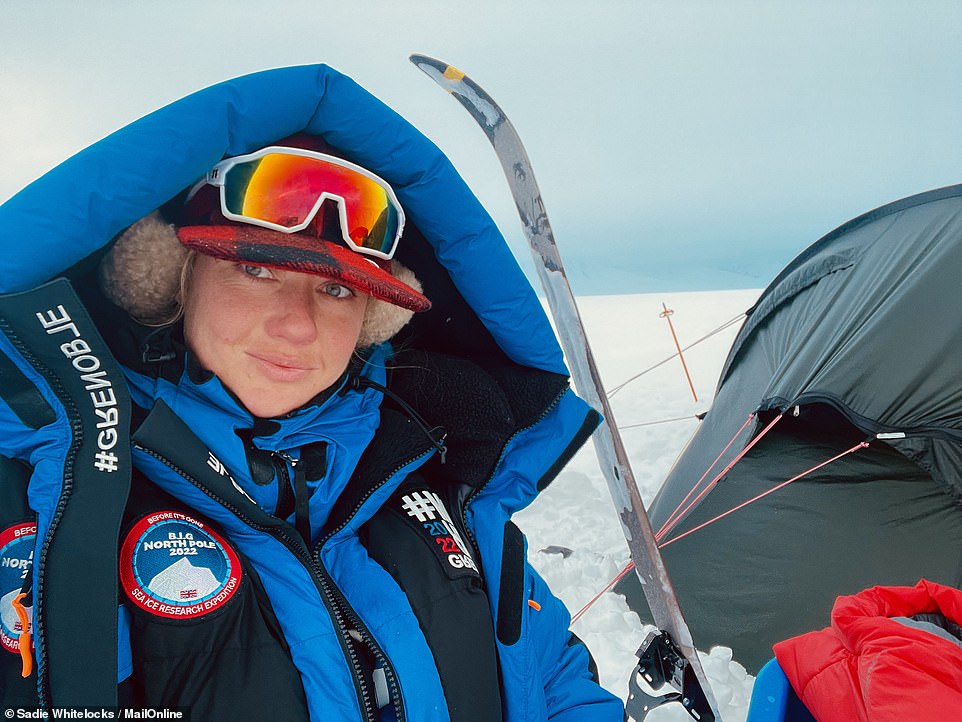 Sadie, above, reveals that the expedition kit had been custom-made by one of the team’s headline sponsors, Moncler 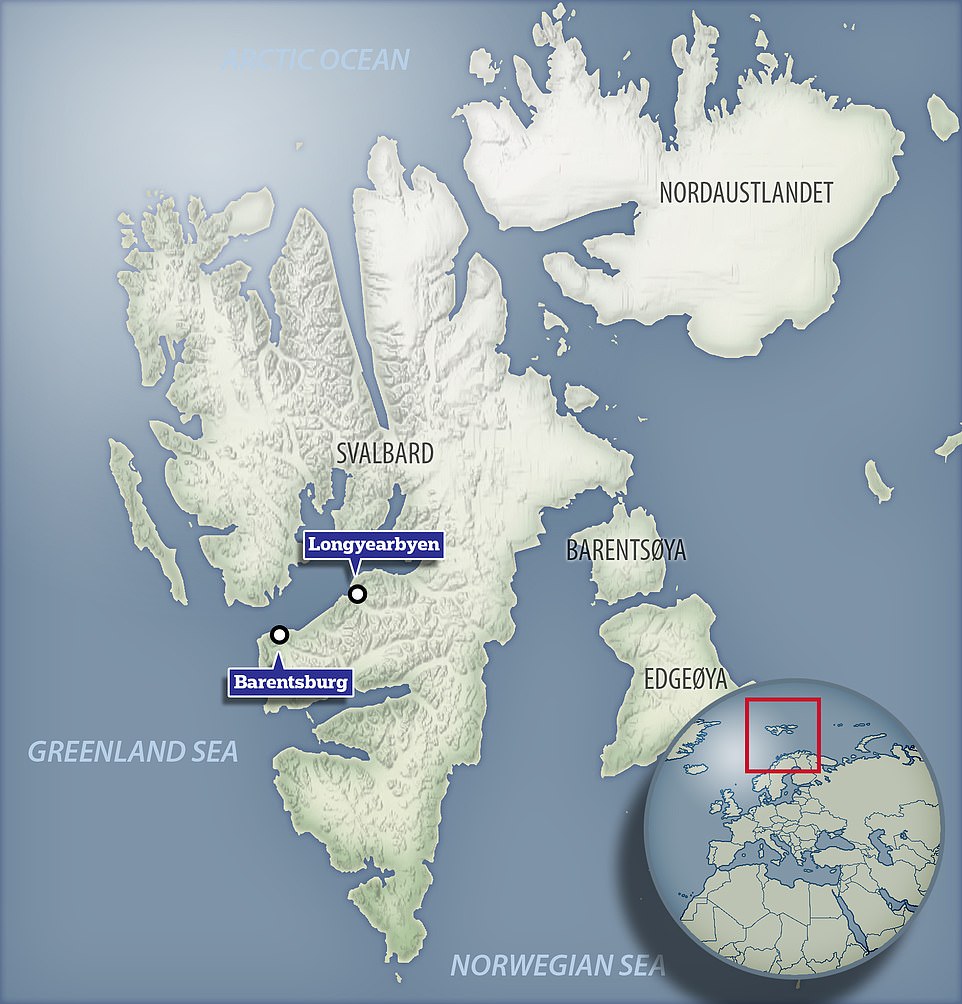 The all-female ski team started their expedition in Longyearbyen, which is the capital of Svalbard and the northernmost city in the world, set around 814miles (1,310km) south of the North Pole

A view (stock image) over the city of Longyearbyen, where the team spent two days ‘stocking up on snacks, foot warmers and gas for the camping stoves’ 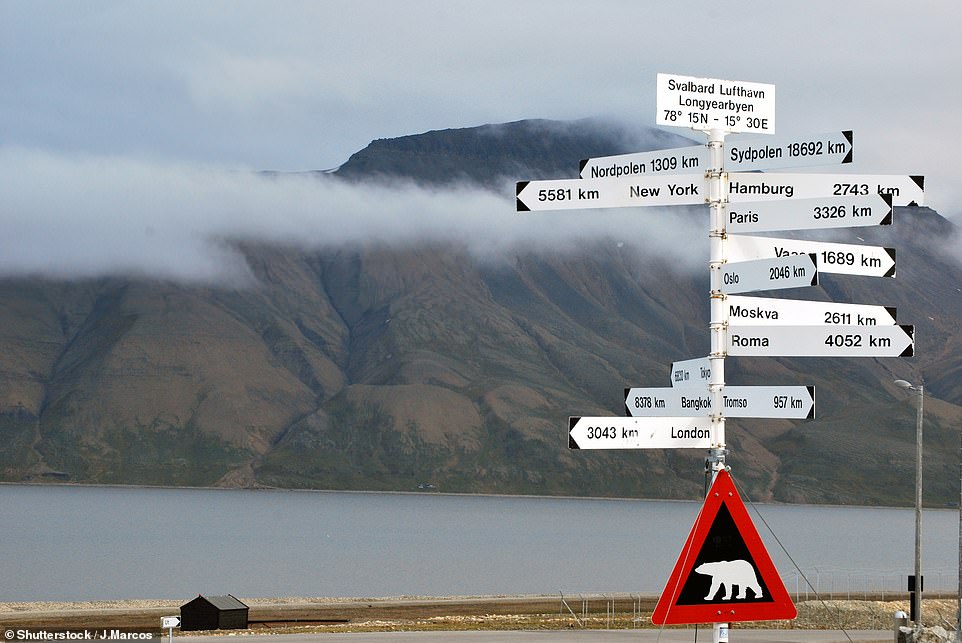 Polar bears are regularly spotted on Svalbard and the last fatal mauling on a campsite in that region occurred in August 2020. Above, stock image 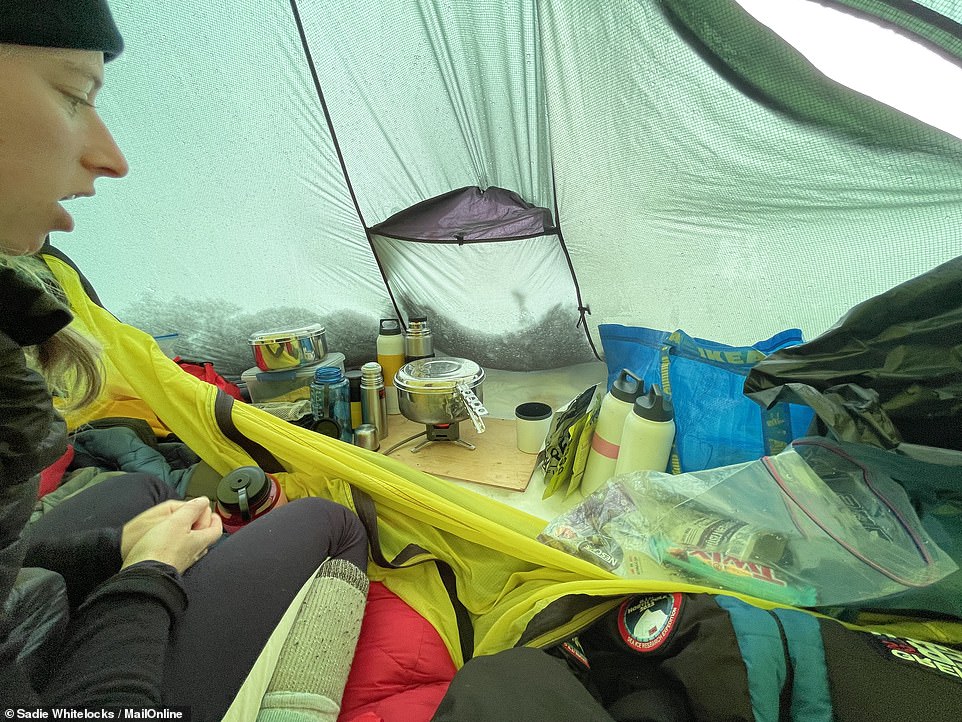 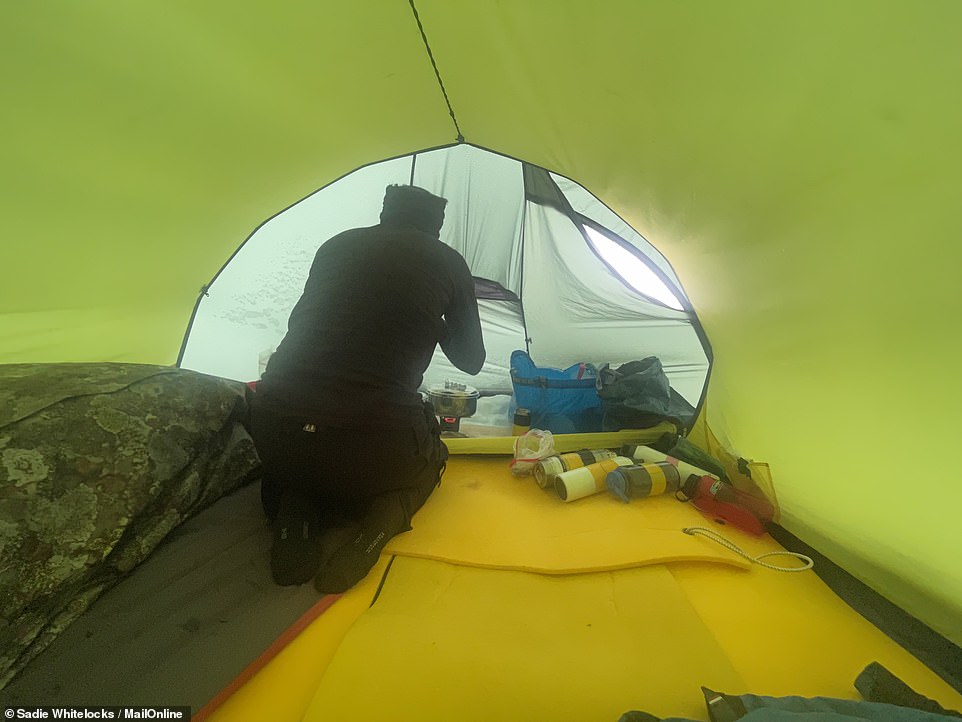 During the night, temperatures plunged to minus 25 degrees Celsius On docking, we immediately agreed Barentsburg had a foreboding atmosphere. The sky was grey and plumes of black smoke billowed from a coal power plant – the main industry there.

After getting all our gear off the boat, we pitched camp on the outskirts of town and ventured into the community for our last slap-up meal before existing off freeze-dried concoctions.

Barentsburg is the only remaining permanent Russian settlement on the Svalbard archipelago and more than half of the population, which stands at around 450, are Ukrainian. Along with a coal-powered power plant, it has its own hospital, hotel, school, kindergarten, and sports facility.

At its height in the 1990s, there were around 1,500 inhabitants, but many have left over the years to seek better job prospects. 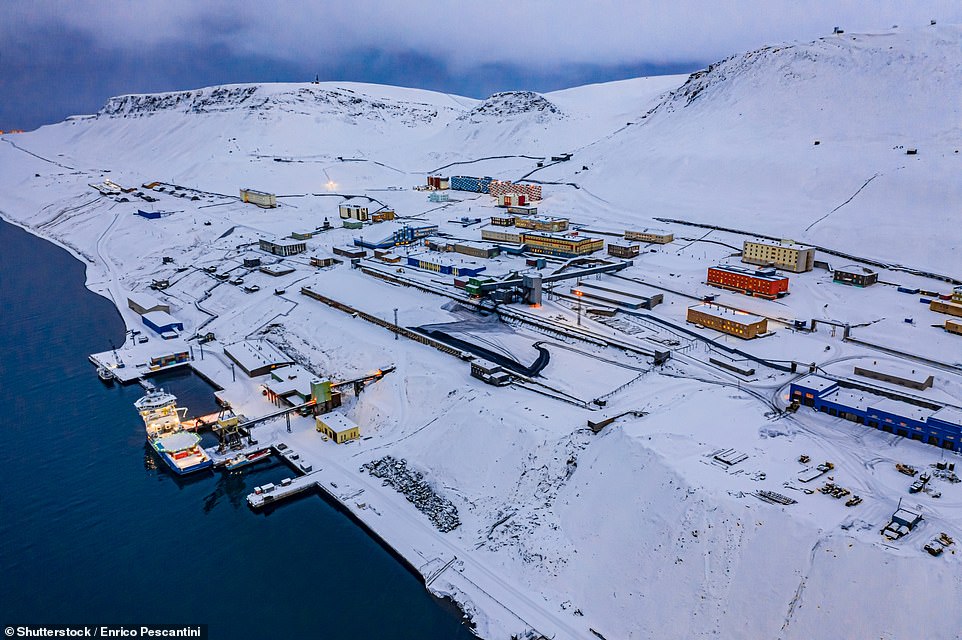 Sadie and her team started their expedition in Barentsburg (above, stock image). This small industrial town, which sits on the west coast of Svalbard’s main island and some 34 miles (55km) from Longyearbyen, is only accessible via boat, Skidoo, or helicopter 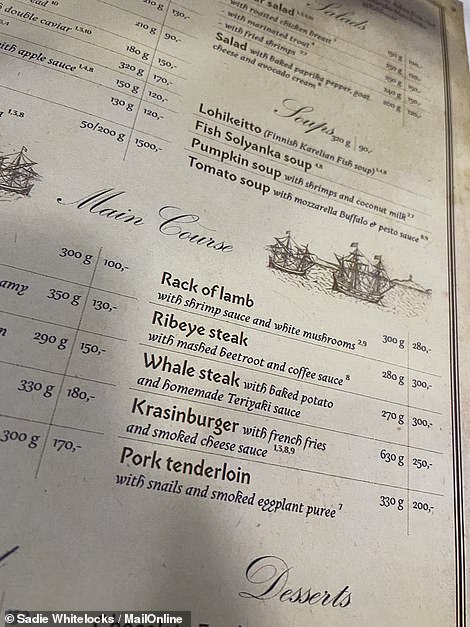 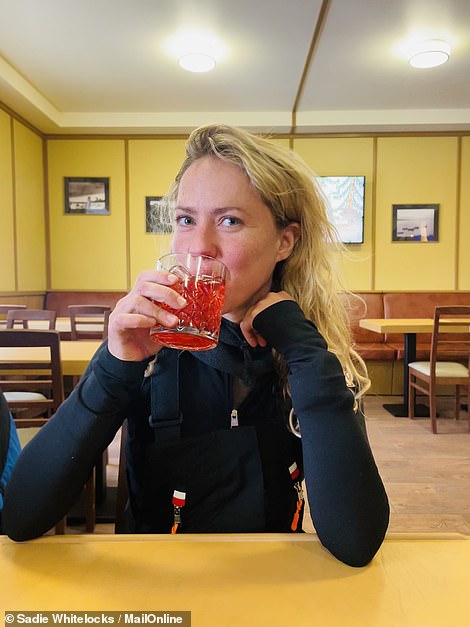 LEFT: While in Barentsburg, the team went for a final meal before heading into the wilds and they found whale steaks on the menu. RIGHT: Sadie pictured inside the restaurant, which was located within a small Soviet-style building 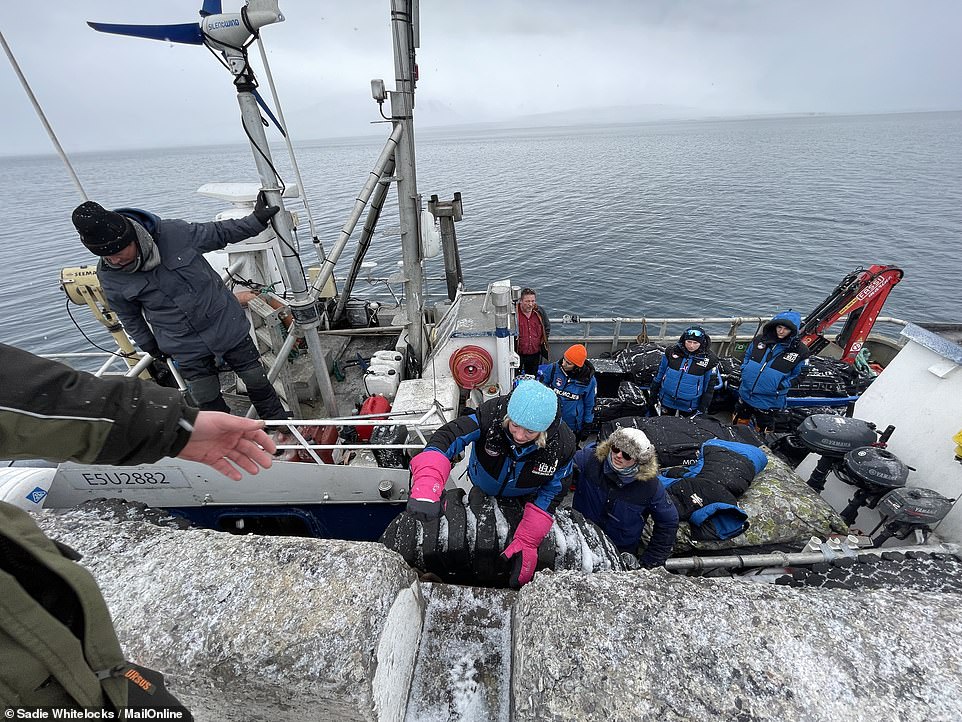 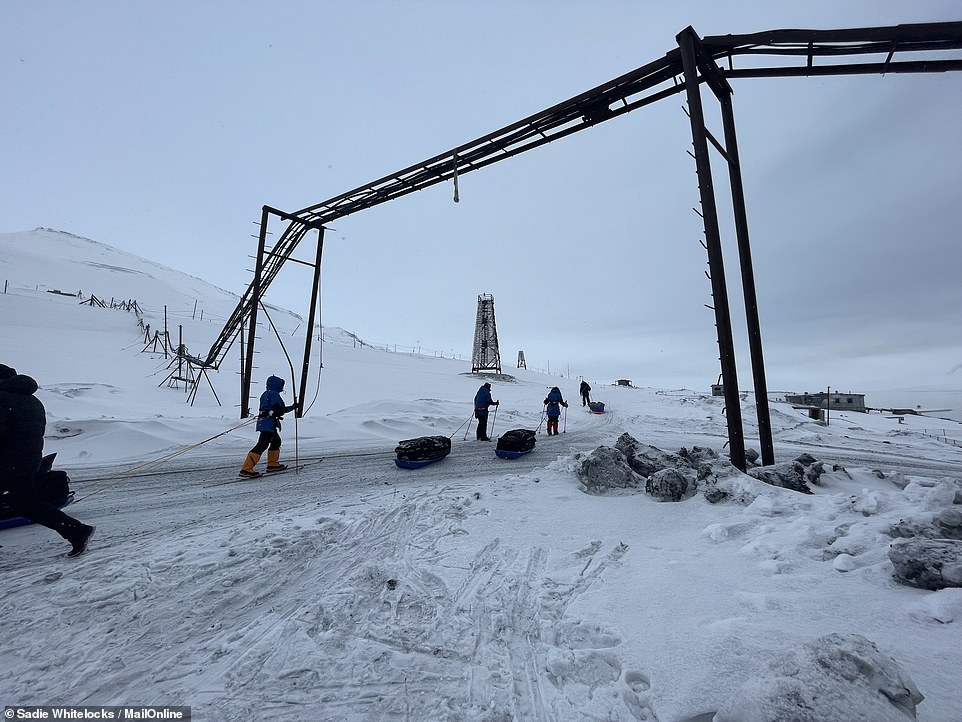 Sadie said Barentsburg, above, had ‘a foreboding atmosphere’ with grey skies and plumes of black smoke billowing from a coal power plant – the main industry there 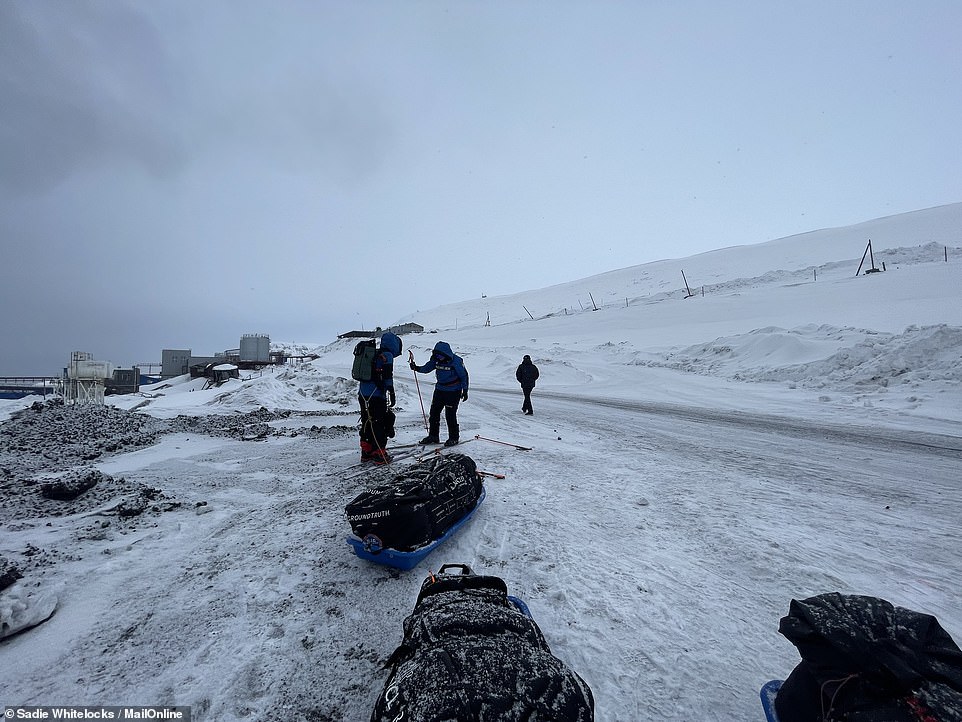 After unloading their gear from the fishing boat, the team set up a camp on the outskirts of Barentsburg 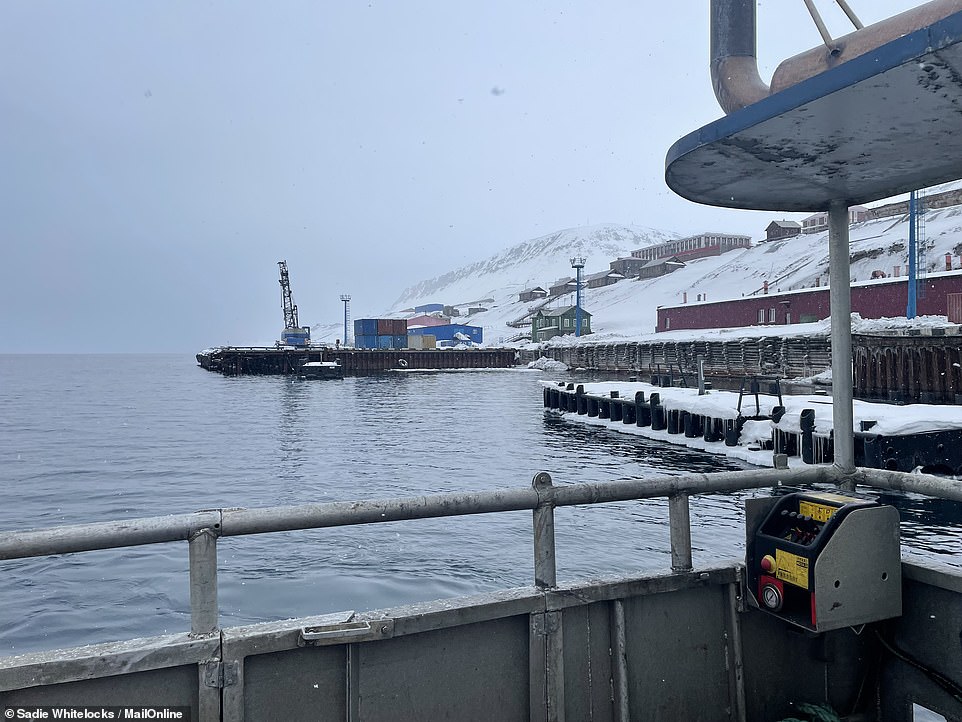 Barentsburg is the only remaining permanent Russian settlement on the Svalbard archipelago and more than half of the population, which stands at around 450, are Ukrainian. Along with a coal-powered power plant, it has its own hospital, hotel, school, kindergarten, and sports facility 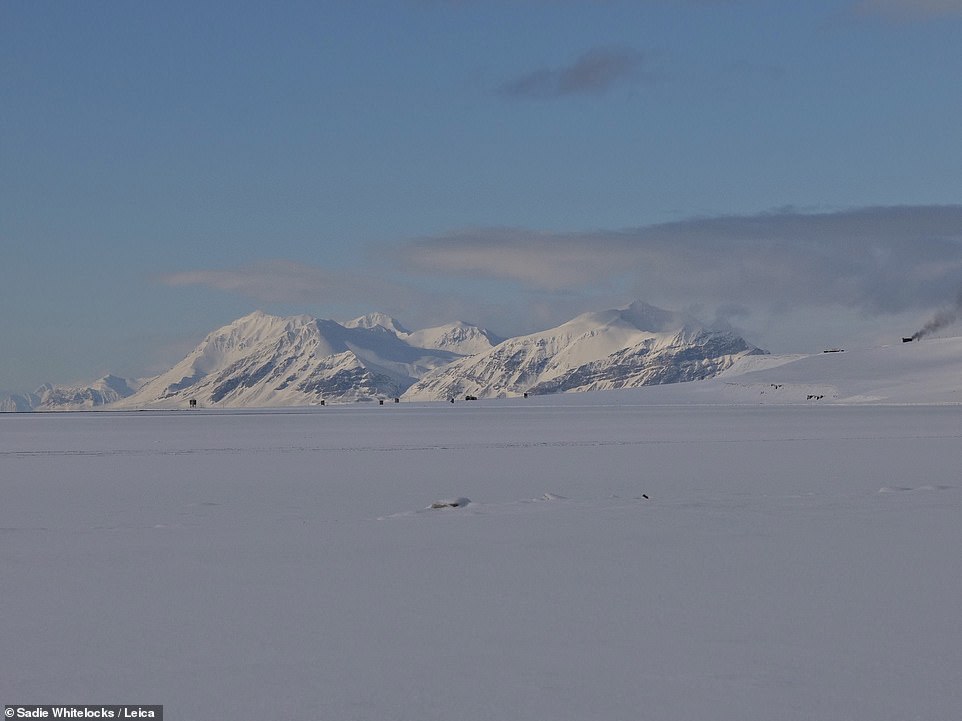 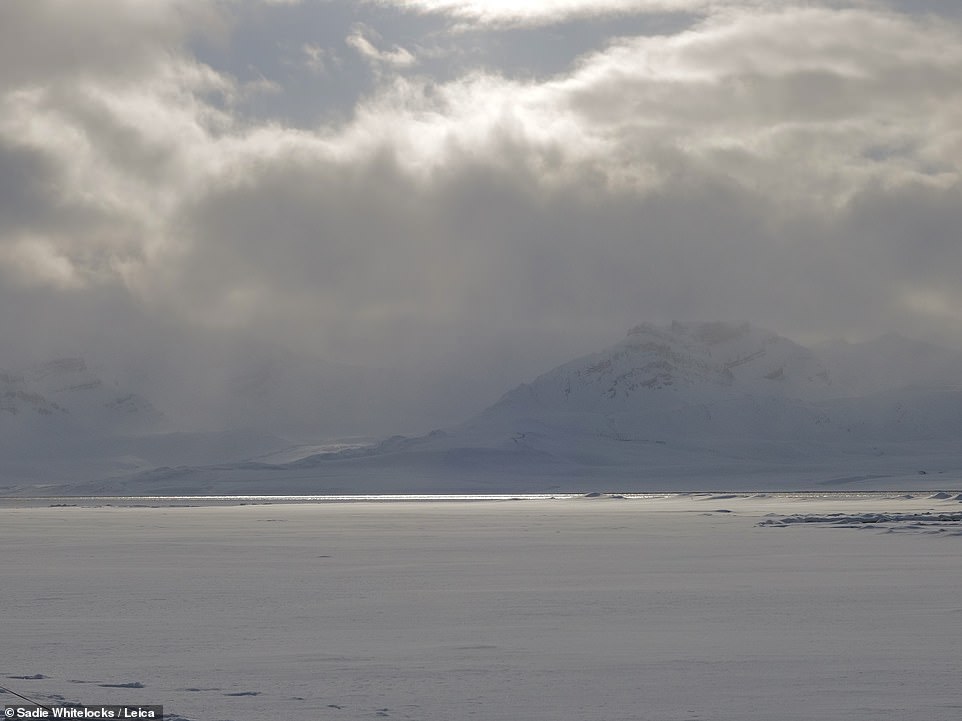 As the first few days passed, Sadie said the remoteness became apparent with no phone signal and no planes passing overhead

Walking around the town there didn’t appear to be too much going on.

Despite the Russian-Ukraine war being in full swing, in Barentsburg there seemed to be no sign of animosity between the two population groups.

We tried going to a bar where we’d heard the burgers were good but that was closed so we settled for a small restaurant inside a Soviet-style building instead.

One of the specialities on the menu included whale steaks, but the majority of us plumped for fish and chips and beef steaks.

Back at camp, we started out with our first polar-bear watch of the trip. In a bid to keep camp safe, we agreed as a team to help the rifleman and do two-hour shifts throughout the night and keep watch for bears.

We had been trained to use the rifle and had a flare gun, too. These would enable us to scare away intruders as opposed to injuring them, as killing polar bears in Svalbard is illegal and has serious consequences.

Luckily, the only white fluffy things I spotted during my nightly shifts were a band of merry Arctic foxes playfully pattering through the snow.

As the first few days passed, the remoteness became apparent. There was no phone signal, no planes passed overhead and the only people we encountered were locals whizzing by on Skidoos. 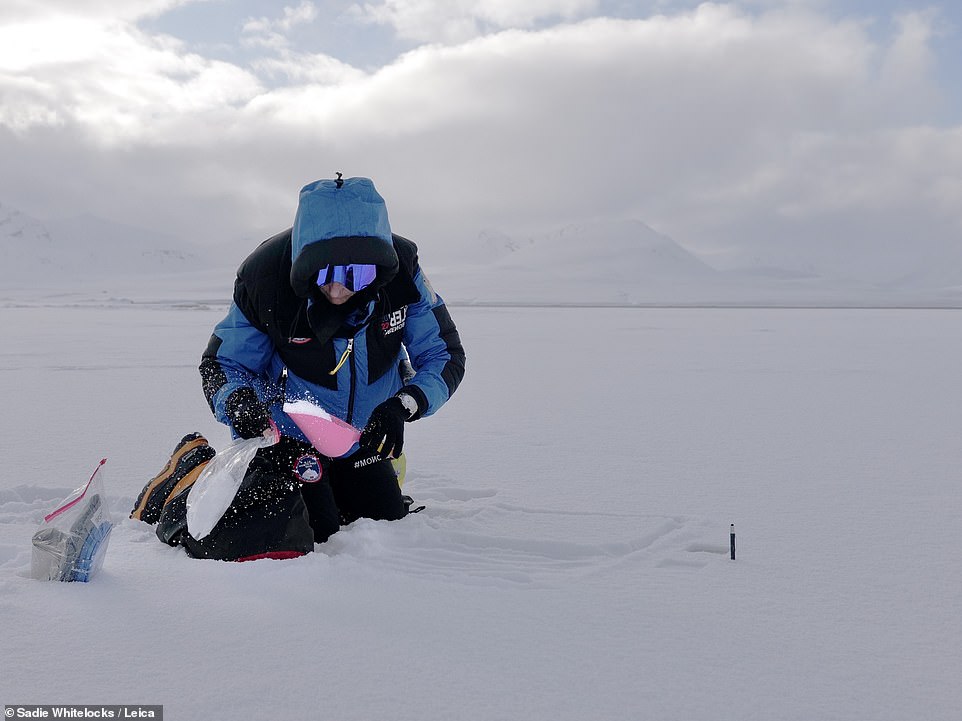 The team took various snow and ice samples to check for microplastics and black carbon deposits, which is something that contributes to the acceleration of ice melt 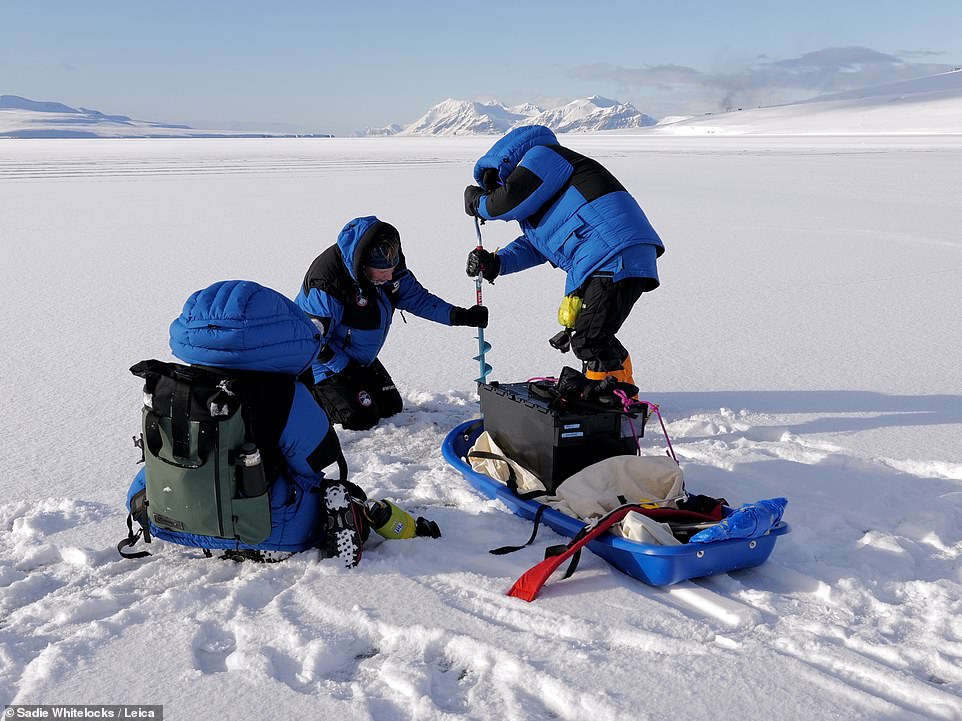 As the team’s scientific research was around Arctic sea ice, they ventured toward the frozen coastline to get water samples using a giant drill bit 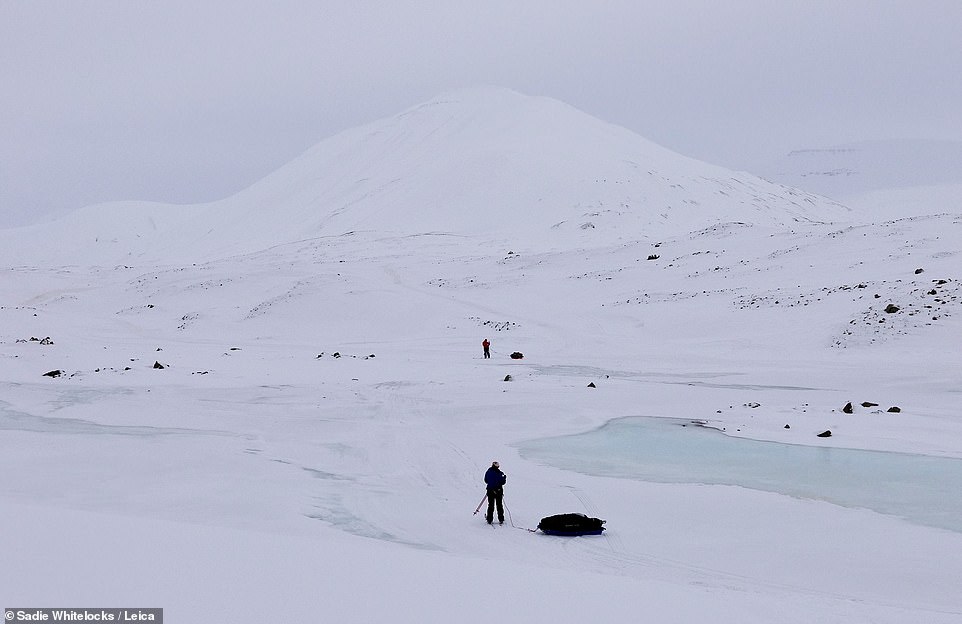 The team didn’t encounter many people during the expedition, only ‘locals whizzing by on Skidoos’ 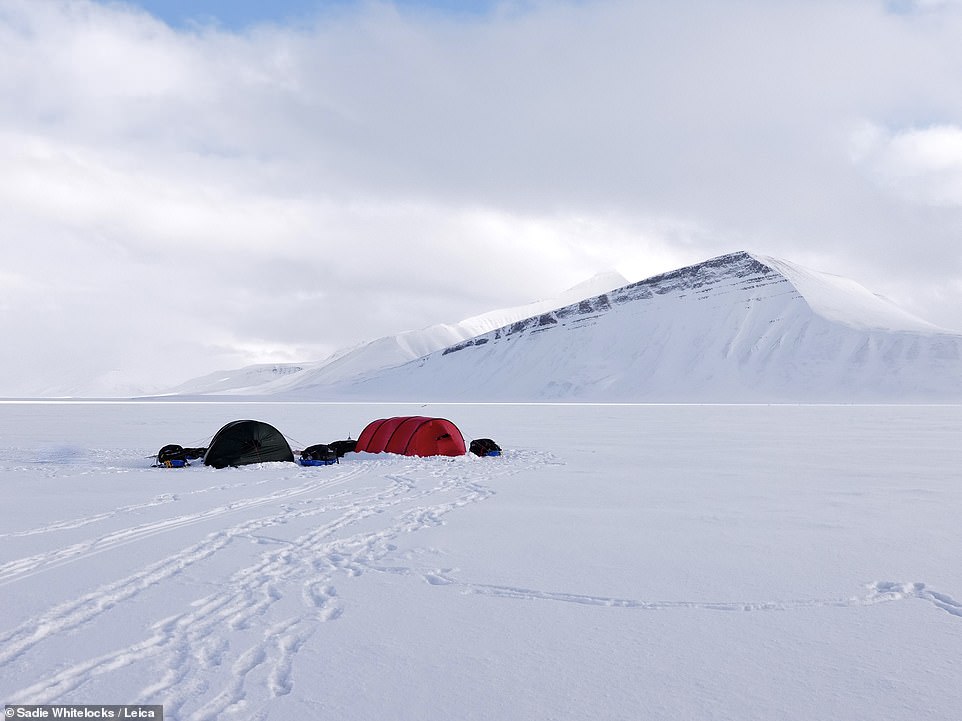 Luckily, the weather held up for the majority of the team’s trip and they were only caught in whiteouts a couple of times 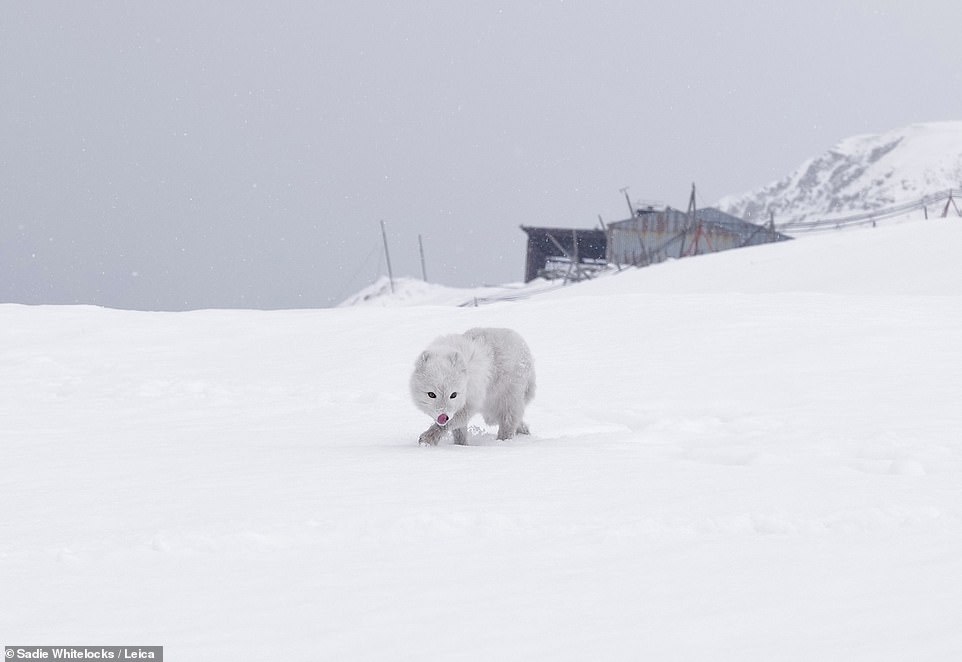 While they had been warned about the dangers of polar bears, the only white fluffy things Sadie and her team encountered were Arctic foxes. The one above was captured by Sadie

Each day involved waking up around 7am and lighting the stoves inside the tent. We would then heat water for coffee, hot chocolate and for our freeze-dried pouches of porridge.

After that, we would pack everything down into our sledges and start skiing, doing 90-minute stints at a time before taking breaks.

Thankfully, all of our kit had been custom-made by one of our headline sponsors, Moncler, and the layered pieces of down-filled gear certainly helped to protect us as the temperatures wavered between minus 20 and minus eight degrees Celsius.

At some points, as the sun beat off the clouds, we broke into sweat and Andrea on our team looked like she could have been skiing in the tropics as she stripped down to her thermal sports bra.

As our research was around Arctic sea ice, we ventured toward the frozen coastline to get water samples using a giant drill bit.

Our plan was to return to the UK with these so they could be checked for microplastics and black carbon deposits, which is something that contributes to the acceleration of ice melt.

Black carbon, which is emitted from gas and diesel engines, coal-fired power plants, and other sources that burn fossil fuel, is a major contributor to climate change and it’s believed Arctic summer sea ice could be gone by as early as 2035. 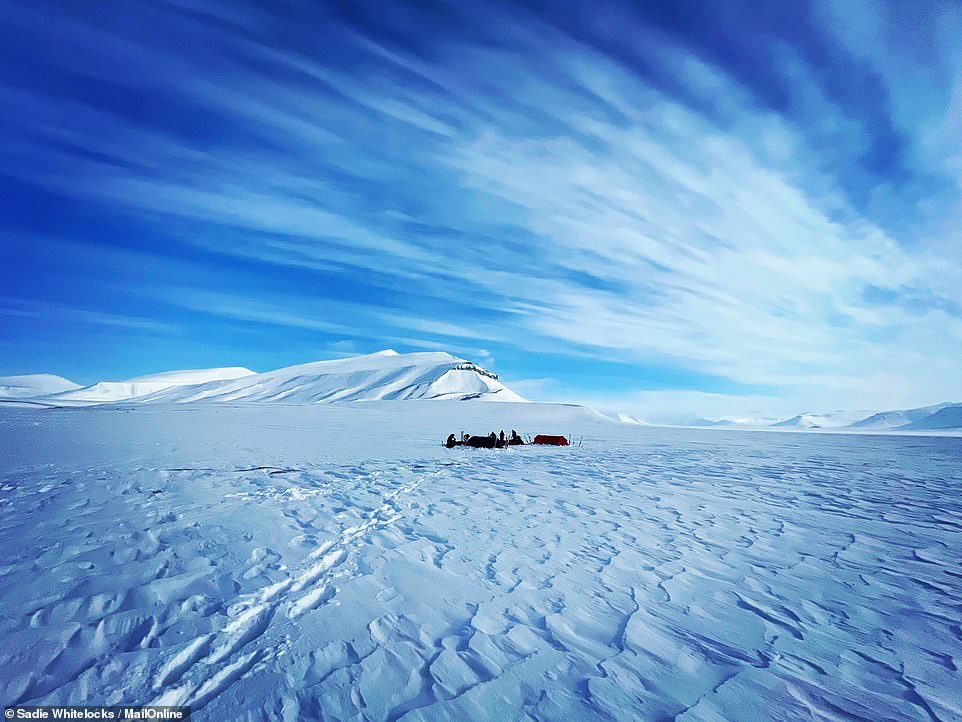 The team rotated a polar-bear watch. This involved each team member getting up in the night to stand outside for two hours at a time 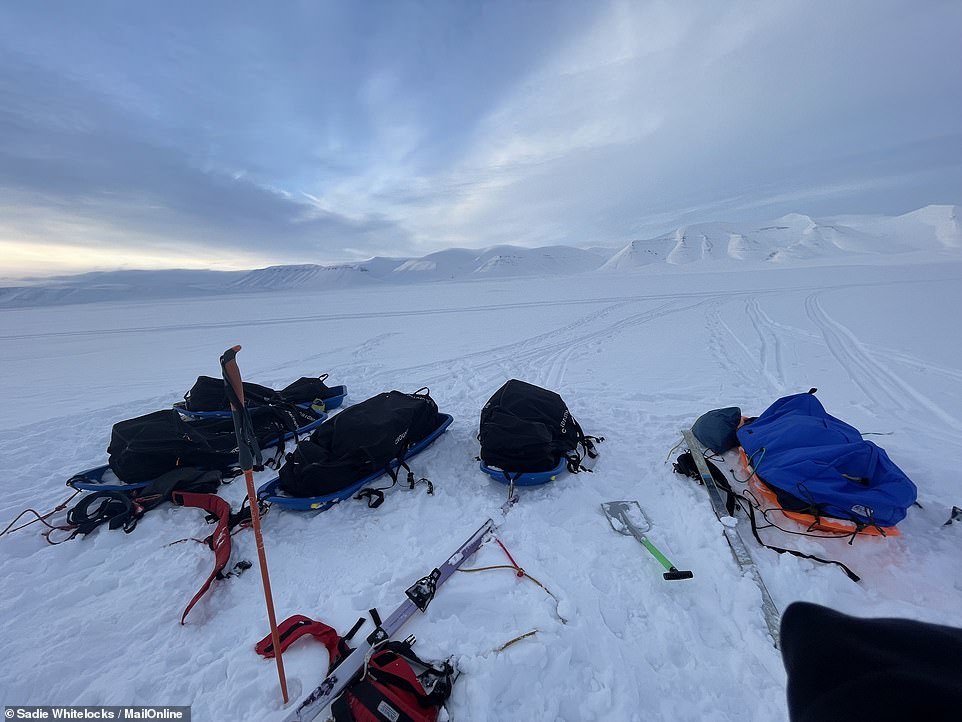 After nine days of skiing, the team were picked up by two local guides and transported by Skidoo back to Longyearbyen 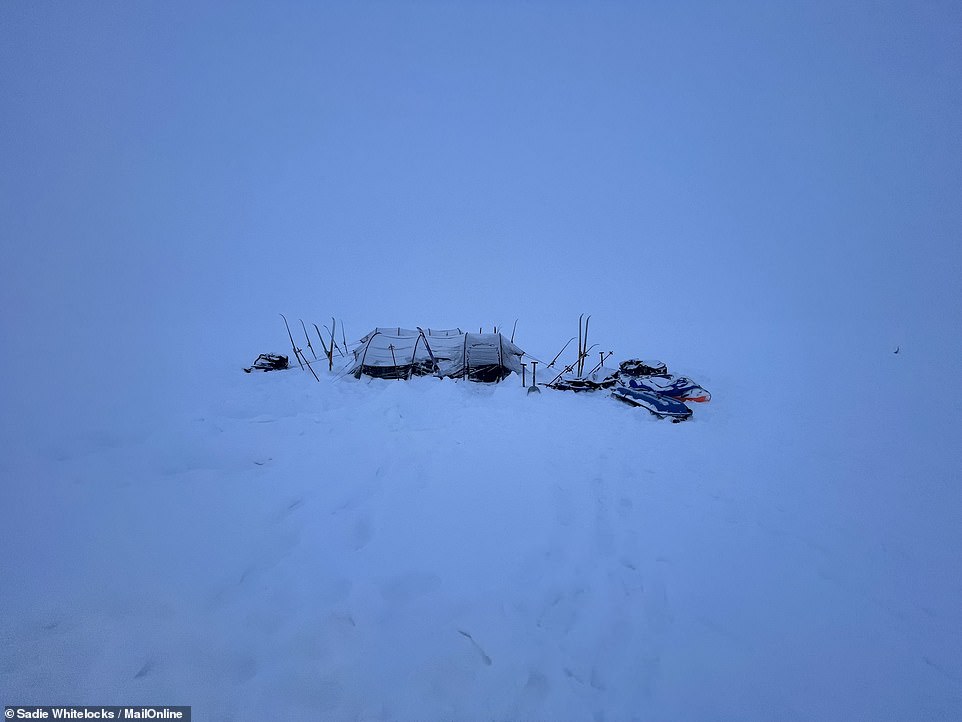 During whiteouts, Sadie said it was impossible to see more than a few metres ahead

Luckily, the weather held up for the majority of our trip and we were only caught in whiteouts a couple of times, which made it impossible to see more than a few metres ahead.

After nine days in the wilds, the most problematic issue was sleep deprivation. Getting up in the night to stand outside in frigid temperatures for two hours was pretty soul-destroying, even if the scenery was exceptional.

The lack of a shower was also pretty grim and the thought of a working bathroom loomed on the horizon like a teasing mirage.

Feeling pretty dazed, battered and tired, we were picked up by two local guides on our final day and transported by Skidoo back to Longyearbyen.

Ironically, after all the panic about bears to begin with, we didn’t see a single one.

Svalbard certainly makes for a stunning place to explore. It was a humbling experience skiing through its undulating valleys and frozen fjords, like tiny ants amid its vast expanse.

Here’s hoping that our ice samples come back clean, and these frozen terrains will remain intact for many more seasons to come.

To follow Sadie and her team ahead of their 2023 North Pole expedition visit www.bignorthpole.com.